We Are Railfans in: Chicagoland

Last month, a member of the We Are Railfans team made a 4,000+ mile trip across the Atlantic and over to the USA! After much consideration and some helpful tips from American railfans, Chicago was decided as the destination - the railroad capital of America!

A great deal of railfanning was done over a 3 week period, making use of the busy network in the greater Chicagoland region and across the borders into some neighboring states. Below is a selection of photos demonstrating the variety of trains and locomotives we saw during our time there.

All photos by Joe Rogers.

The first introduction to rail transit for most flying into Chicago are the 'L' trains. The Blue Line running to O'Hare International Airport has origins back in 1895 but has been running under the current operation since 1993. Pictured is a Green Line train to Cottage Grove arriving at Clark / Lake within 'The Loop'. This is the second-busiest station on the system. 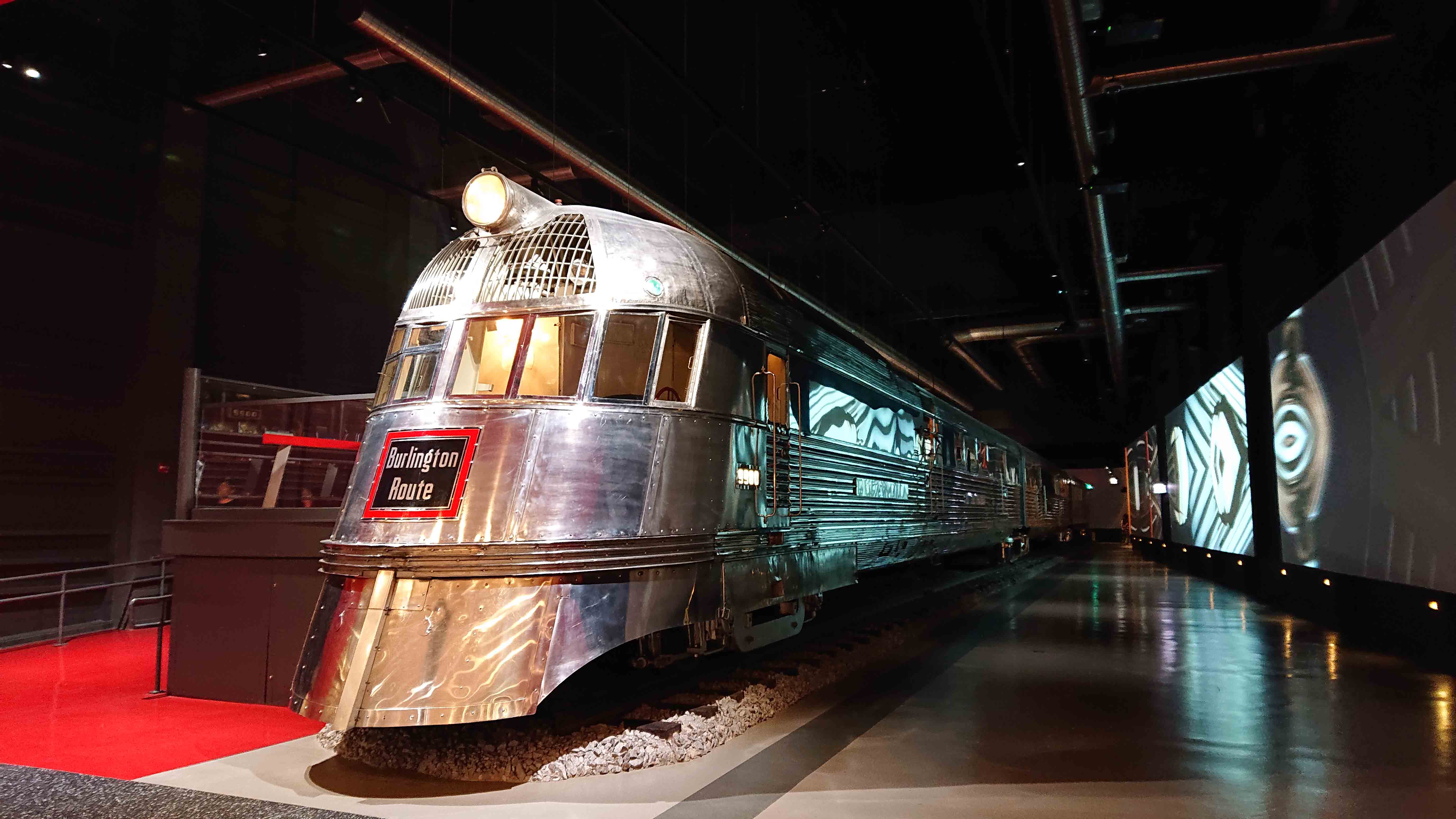 Chicago's railroading history can be appreciated at the Museum of Science & Industry, located in Chicago's South Side. CB&Q 9900, pictured, made a record-breaking run to the city from Denver, CO in May 1934. You can read more about this incredible feat in Gary Dolzall's We Are Railfans article.

Chicago's South Side is served by Metra Electric, a line noted for its absence of Metra's diesel locomotives. At 59th St/University of Chicago Station, train number 312 to Millennium Station arrives in the form of a Highliner II EMU, built by Nippon Sharyo.

At Blue Island, one of a number of termini for Metra Electric, passengers can alight and switch to the Rock Island Line and head to Joliet, IL. Here Metra services are diesel-hauled, as depicted by Metra no. 202, an EMD F40PHM-2. 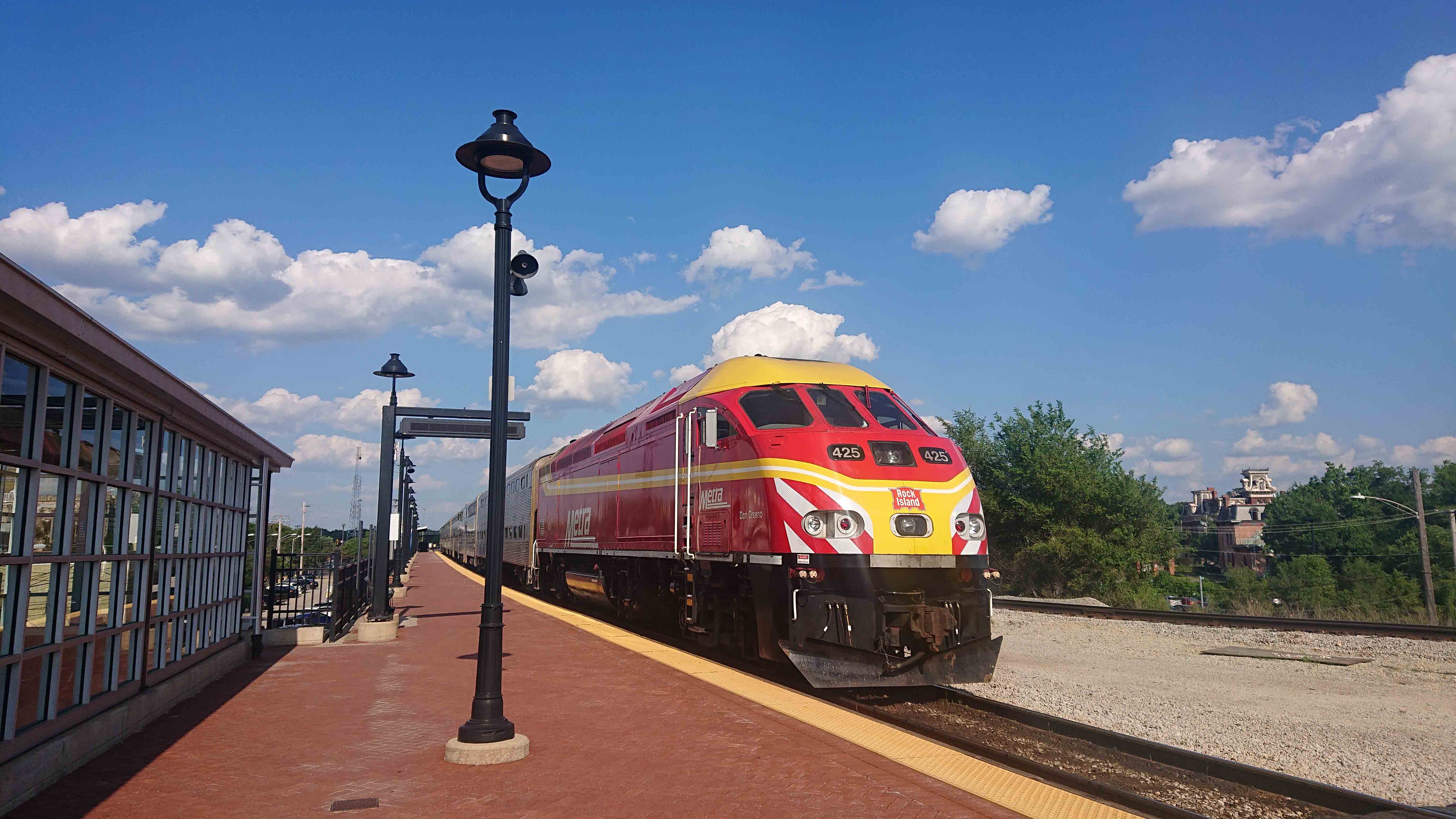 Metra have a number of locomotives painted in heritage liveries which provide railfans with some great photograph and spotting opportunities. Metra no. 425 'Don Orseno', an MPI MP36PH-3S locomotive, is seen here at Joliet Station in a Rock Island paint scheme.

Also directed south out of Chicago is the South Shore Line, operated by the Northern Indiana Commuter Transportation District (NICTD) which runs across the Illinois-Indiana border to South Bend, IN. The route passes through Michigan City, IN where for a short stretch, the single-level EMUs can be seen street-running. Sadly, that stretch was under maintenance during our visit and will remain so until early 2023. 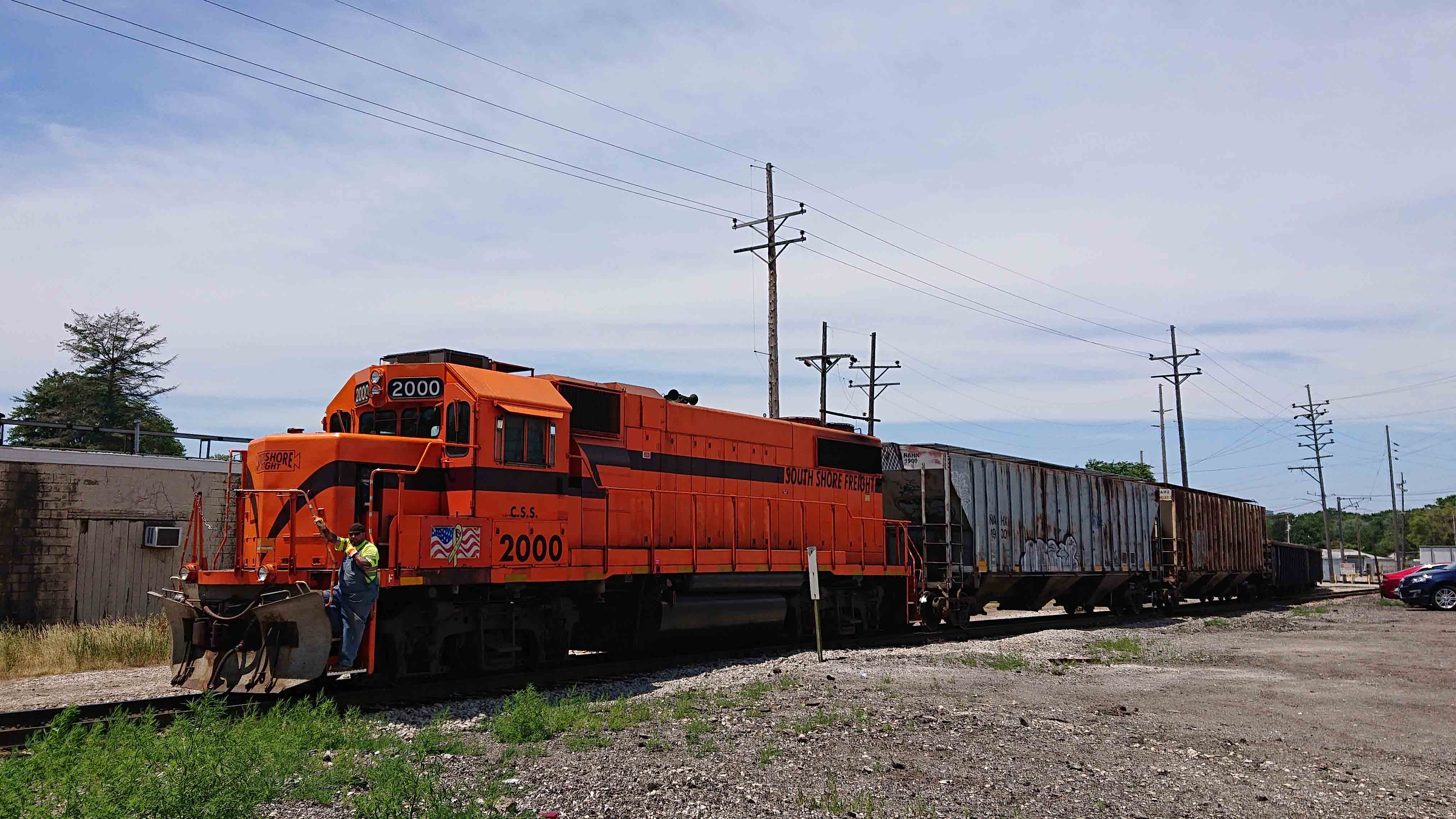 At Michigan City, South Shore Freight locomotives work away switching cars around the shop there. Here, a pair of GP38-2 locomotives (one unseen) run through a railroad crossing 'top-and-tailed' at Carroll Ave.

Long and impressive freight trains typical of American railroading can be spotted passing by passenger stations on a number of routes in and around Chicago. At 55th-56th-57th St Station, Illinois Central hauls 130 cars towards Downtown Chicago, headed by two EMD SD70s. NS, BNSF and CN consists were also seen (but sadly not photographed) during our time in the area. 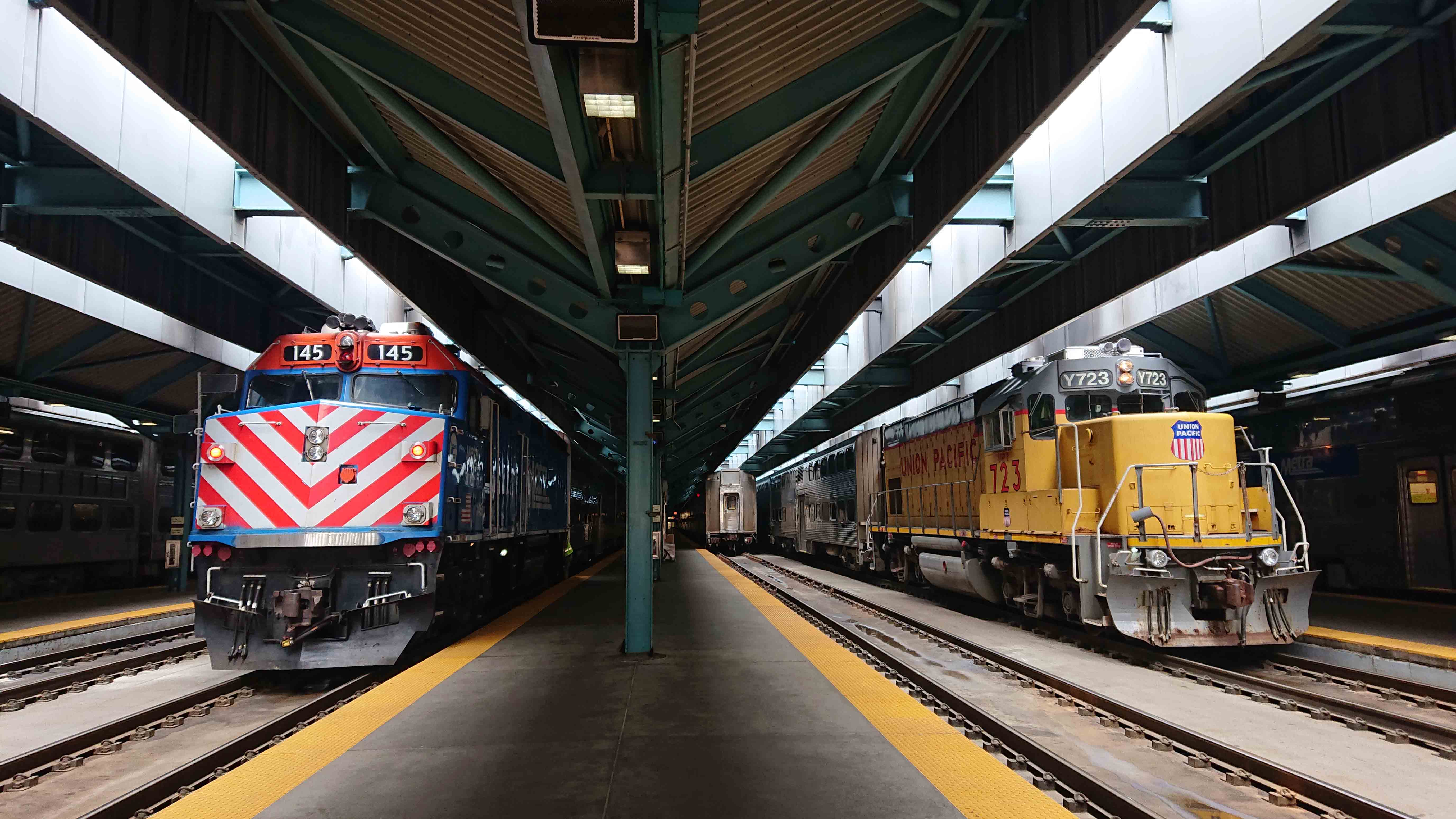 South of Chicago's Union Station, where Metra and Amtrak services move people around Illinois and beyond across the USA, a large and sprawling yard extends underneath Roosevelt Road and the Roosevelt Road Bridge. Above, four Amtrak locomotives prepare for their next duties consisting of three SC-44 'Chargers' and a GE Genesis locomotive.

Further into the yard, another GE Genesis runs light engine away from Union Station whilst a GP39-2, BNSF no. 2759, endlessly switches cars for Metra. This location is popular with railfans, due to the regular activity that goes on by both Metra and Amtrak. 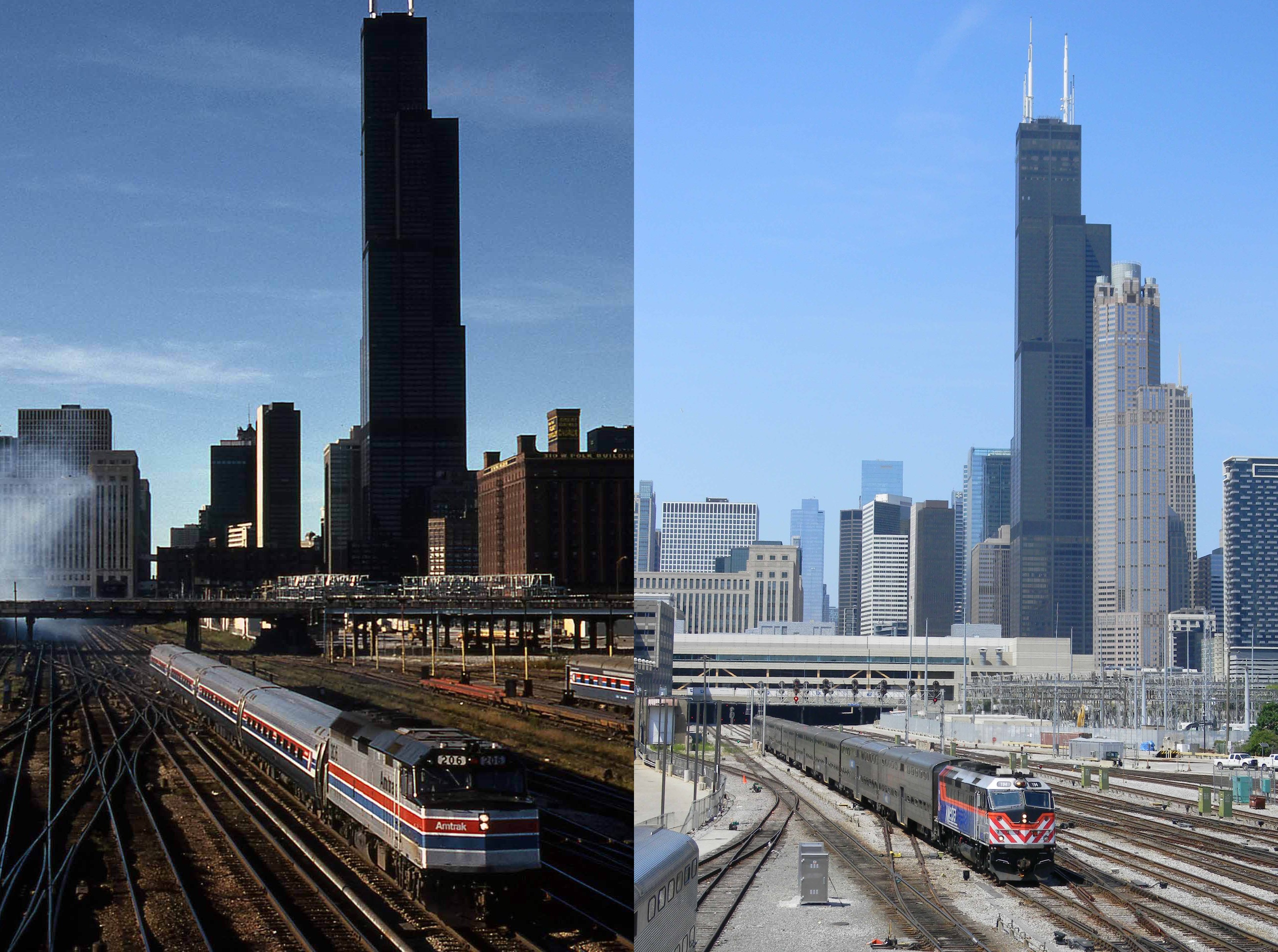