Walking down the aisle of the 'Marriage Carriage'!

Walking down the aisle is more often than not the most memorable experience in one's life, but for one lucky couple, this was made more memorable as the aisle in question was that of a Pendolino high-speed train! After four years of being together, austistic trans couple Laura and Jane were looking to tie the knot and with the help (and a bit of luck) from Avanti West Coast, Laura's special interest in trains became the theme of their wedding that both they and their guests could enjoy. We had a chat to Laura about the experience!

All images published with Laura's permission.

So firstly, congratulations! How are you both settling into married life?

We are both settling really nicely into married life. Not much has changed honestly, but the knowledge that a logistical hurdle is out the way, and if anything should ever happen to either of us, we've got all the legal stuff sorted. It has been nice to relax, and just know that we are finally married. 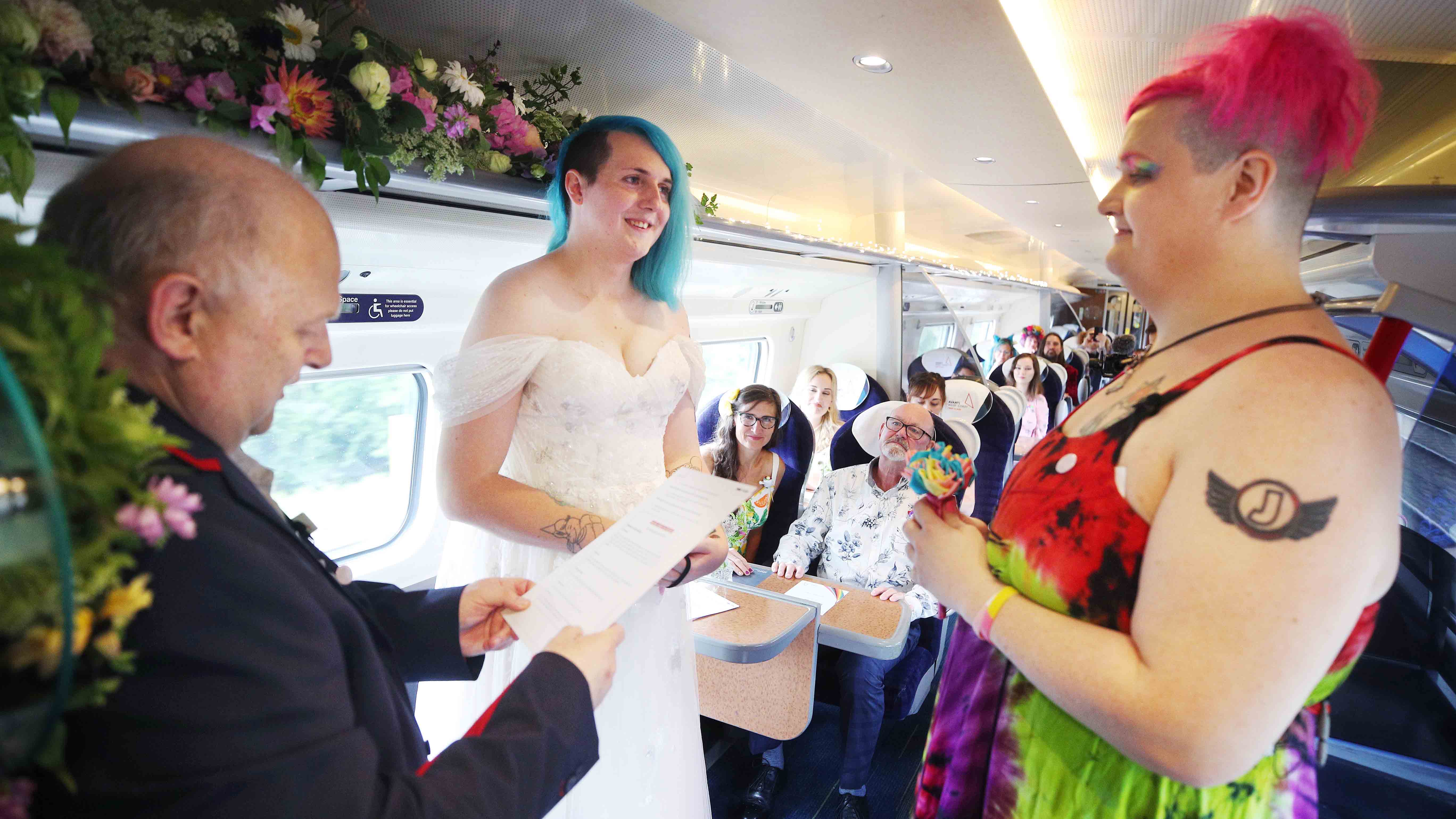 How did this all come about? Was it always the plan to get married on a train?

Getting married on a train was never the plan, in large part because it's not usually an option on offer. Myself and Jane were always going to get married, but due to financial constraints we were going to keep our wedding small and focused. We were just going to do a small registry office wedding, with a very small guest list, and a lot of cost cutting choices. Our train wedding came about as a result of a competition we saw on Twitter, where Avanti West Coast were offering an all inclusive wedding on one of their trains. Entrants had to give a one sentence explanation of why they felt they should be the recipients of that train wedding. I entered, with a little bit of information about my autism special interest, and our battle as trans women to be legally recognised as wives, and thought very little about it. I never assumed I would win, so I didn't think about it until I got the email saying we had won.

When you won the competition, what were your first thoughts?

Honestly, I was overwhelmed. I at first felt like it must have been a scam, or a prank. Once I confirmed it was real I went and told Jane. We were both super excited at the prospect of a free fancy special interest linked wedding, but also very aware it needed to happen on a set date, and that we were going to have to put a wedding together with two weeks' notice. It was a real mix of excitement, and chaos. 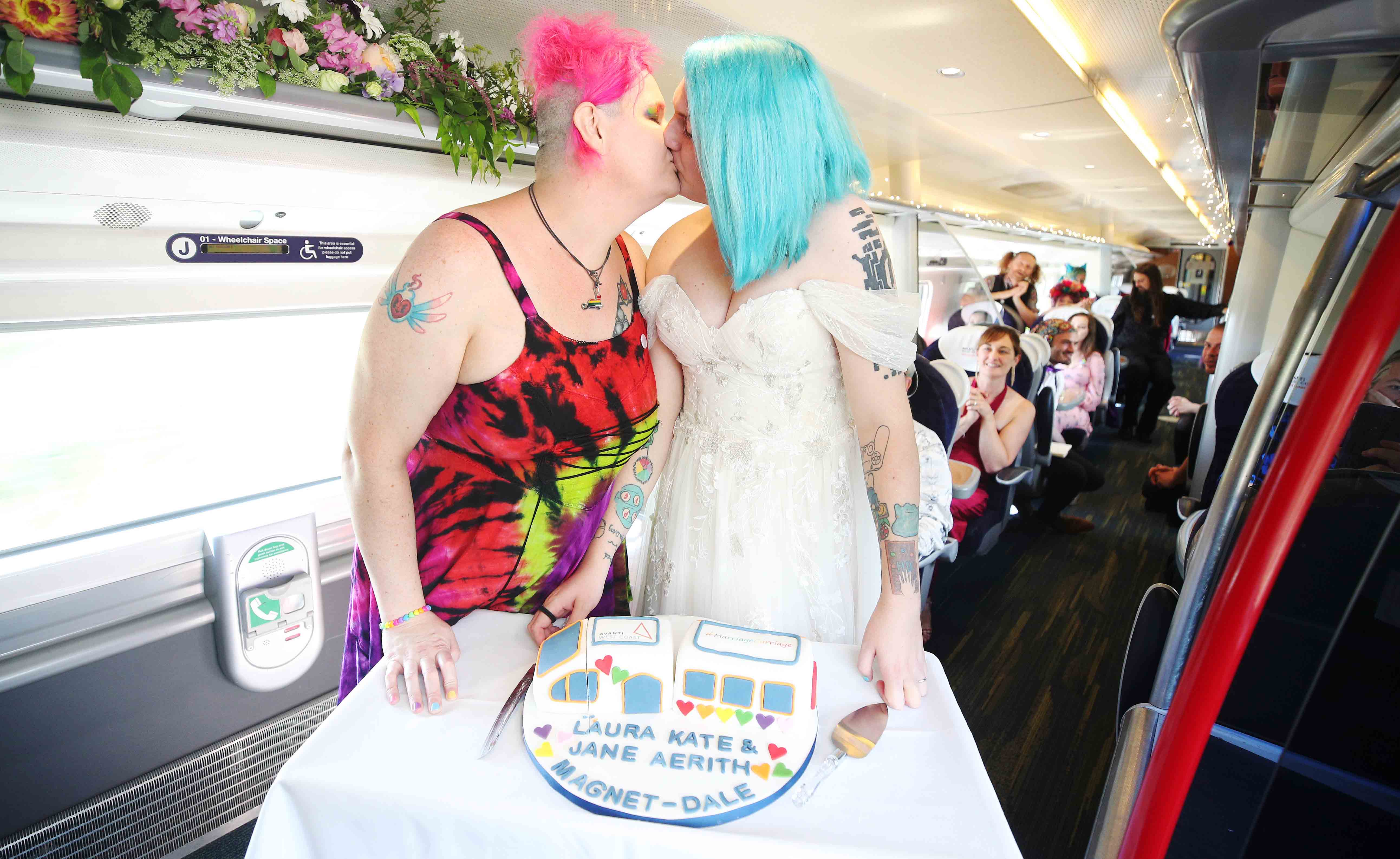 Were you looking at other venues? Castles, medieval barns, a low-key registry office?

We had very much been looking at a low key registry office wedding, in large part because as much as a fancy wedding seemed like a nice idea, in practicality neither of us was comfortable with spending that kind of money on a wedding, when we could instead save it for our lives together.

Are either of you railfans?

I am autistic, and have had a special interest since a very young age. It's a bit of an autism stereotype, but from a very young age my mother used to take me train watching when she needed me to calm down. I've never been interested in trains in the sense of how they mechanically work, but more their societal function. They're a mode of mass transport that follows predictable paths, at set reliable times, and there's something very satisfying about them in that regard. Plus, I really enjoy the low hum of noise, and gentle rumble, of riding trains.

What kind of trains are you into, or is it just a general appreciation?

While this may not be a terribly satisfying answer, I have a really broad spectrum interest in trains. So long as it goes on a set path, between predictable destinations, on a reliable schedule, then I'll find something to love about it. That said, if I had to pick a specific favourite train right now, I might say London's Docklands Light Railway, or DLR. It's perhaps a childish reasoning, but as it's a driverless train I really love sitting in the front seats of the front car and imagining I am driving the train haha! 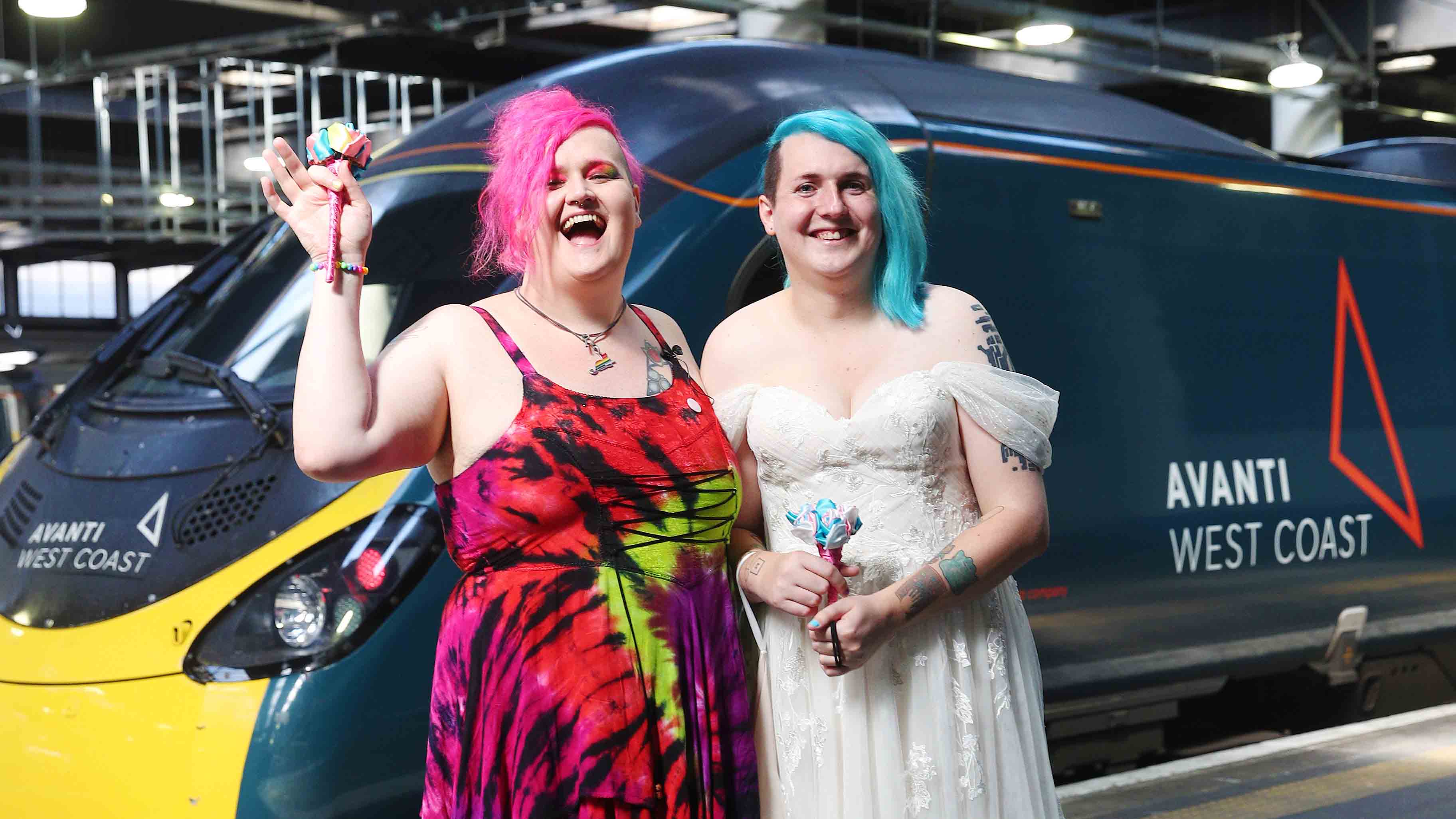 What kind of service did Avanti West Coast provide?

Before our journey began, we had a wonderful first class reception in the first class lounge at London Euston station. We were then taken to the train via a luggage car, decorated with rainbow hearts. Along the way, several station message boards displayed announcements about our wedding. Once on board, we had the ceremony in a private first class car of the train, before enjoying a wedding breakfast together. Our journey went from London Euston to Birmingham New Street, and back, with a stop in Birmingham New Street station to take some wonderful photographs. We cut the cake, and had a party with dancing on our return journey. We were also provided with some really lovely train themed touches on the journey, such as custom first class seating headrests with our initials engraved on them which every guest could take home, a train themed wedding cake, and little train themed boxes of cake. Additionally, they made several announcements for us over the train's tannoy during our journey.

How was First Class?

I don't ride first class on trains terribly often due to the price, but having an entire first class car of a train to ourselves allowed us to really feel at home. We had music up loud, prosecco flowing, and really got to enjoy having a lovely party, in a setting where one would usually not be able to be nearly so loud and energetic. A real once in a lifetime experience. 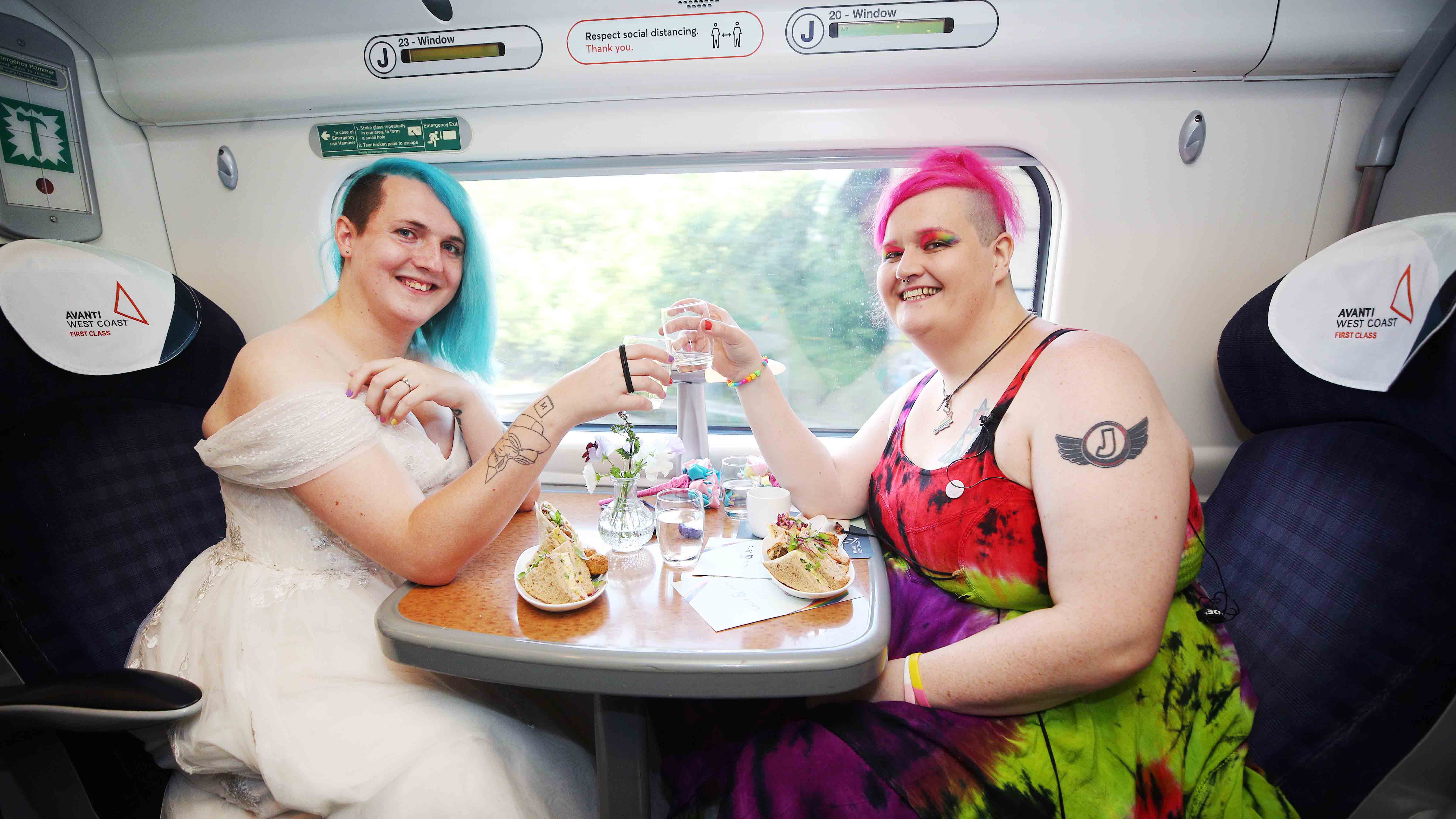 Did the speed or journey bother you? Or did it add to the thrill?

I personally loved the speed of the train, though it did on occassion make certain parts of the wedding tricky. Our first dance involved a fair amount of bent knees to balance, and holding still for the photographer as we cut the wedding cake was tricky.

What did your guests think? Did they enjoy it?

The feedback from our wedding guests was that it was the most unique wedding they had ever been to, as well as the most fun. Because our venue was so non traditional we really leant into ignoring a lot of the tradition around weddings, and everyone seemed to have a lovely memorable time as a result. 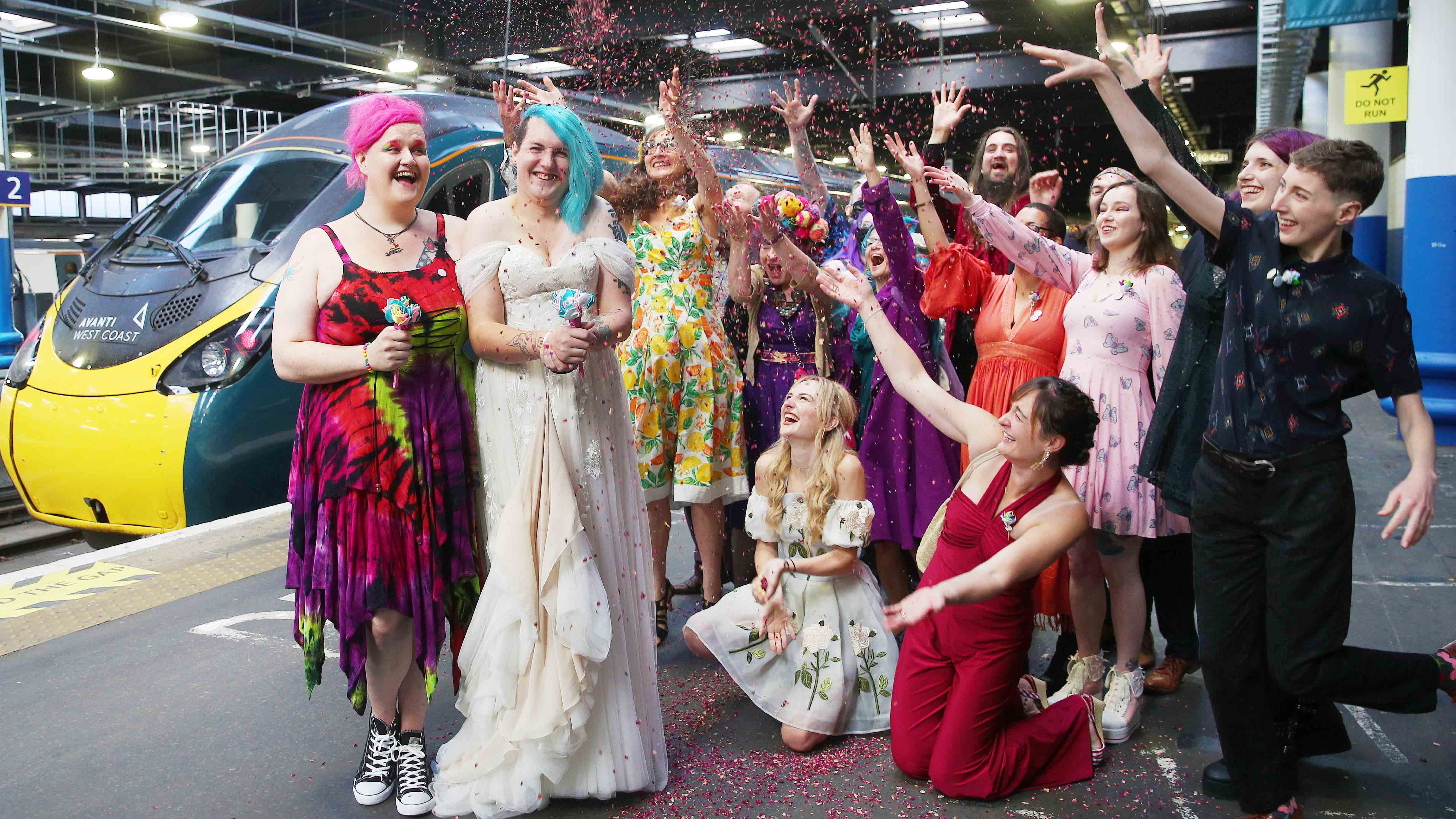 Would you recommend others consider the train and an alternative wedding venue?

I don't know if Avanti plans to do this again in future, but if they ever make this a service people can optionally pay to do, I can attest that I had a wonderful time, and felt very supported. They seemed to anticipate our every need, and put together a really wonderful wedding for someone enthusiastic about them. I couldn't recommend the experience enough.

What about the honeymoon? All train-ed out or are there more journeys to come?

As we only had two weeks to plan the wedding, we've not yet gotten around to planning our honeymoon, but there's a good chance whatever it is, it'll involve more trains, and most likely a sleeper train at some point in the journey. 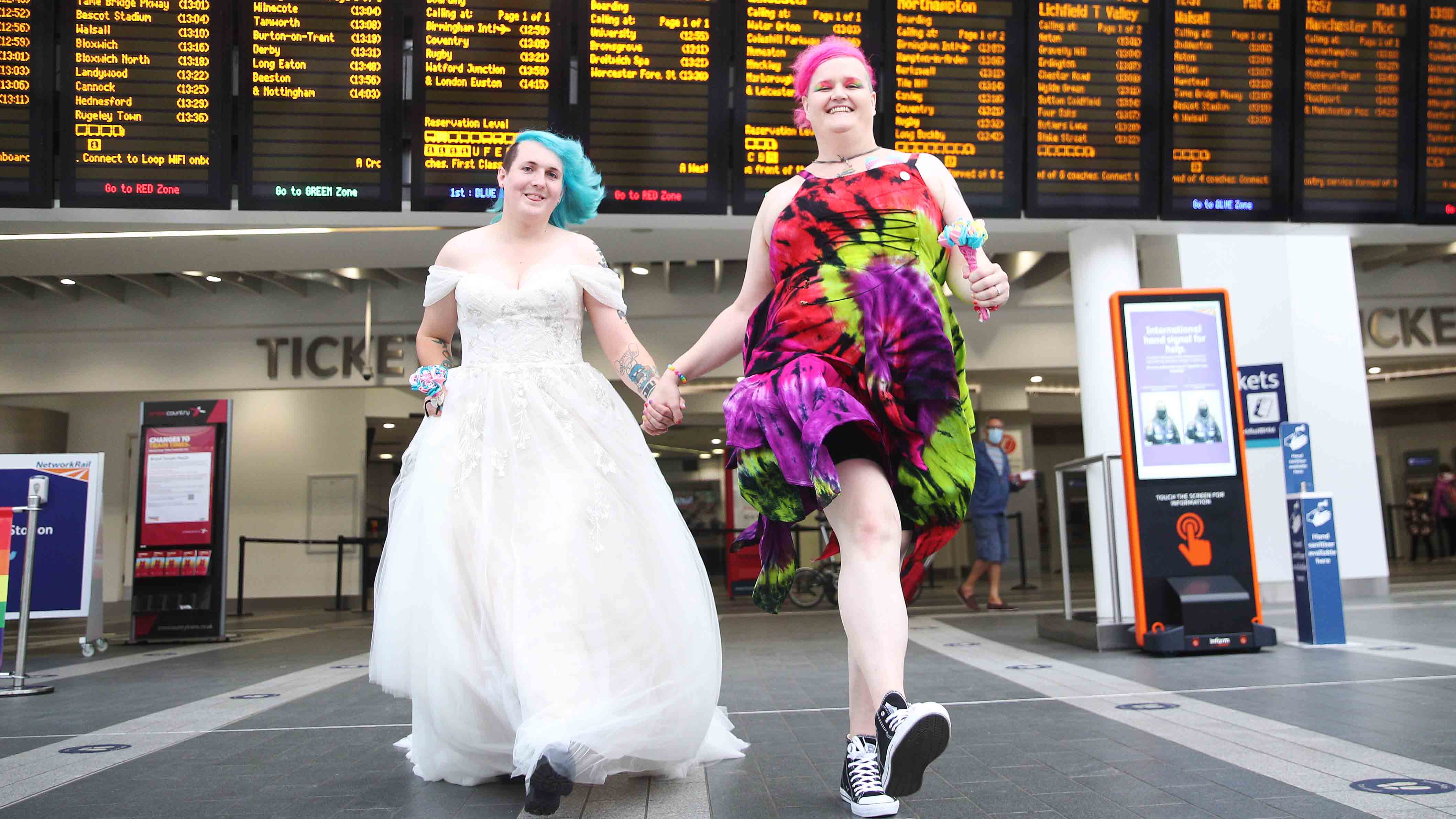 Congratulations to Laura and Jane! You can find out more about Avanti West Coast's passenger trains at: https://www.avantiwestcoast.co.uk/ 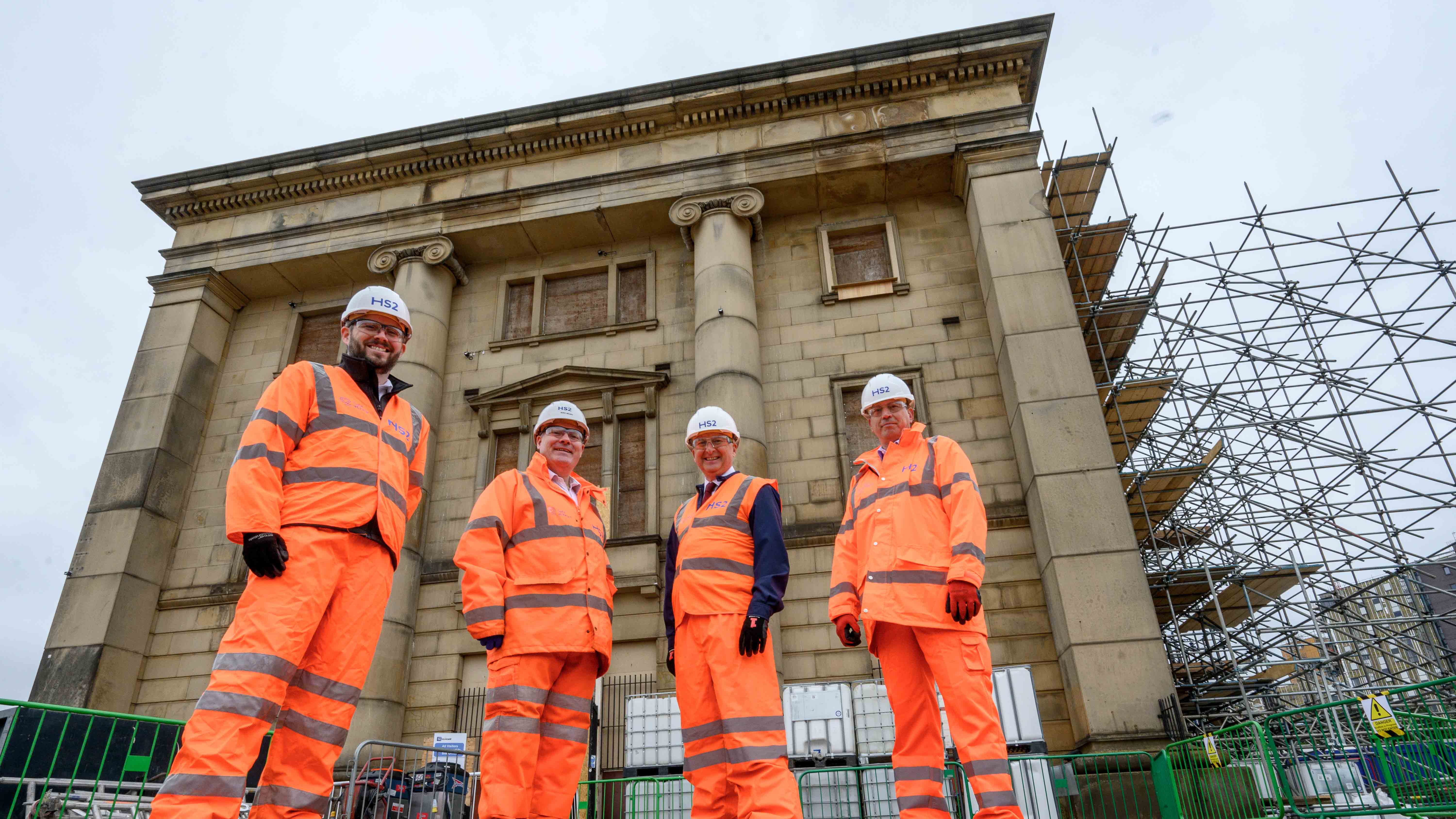 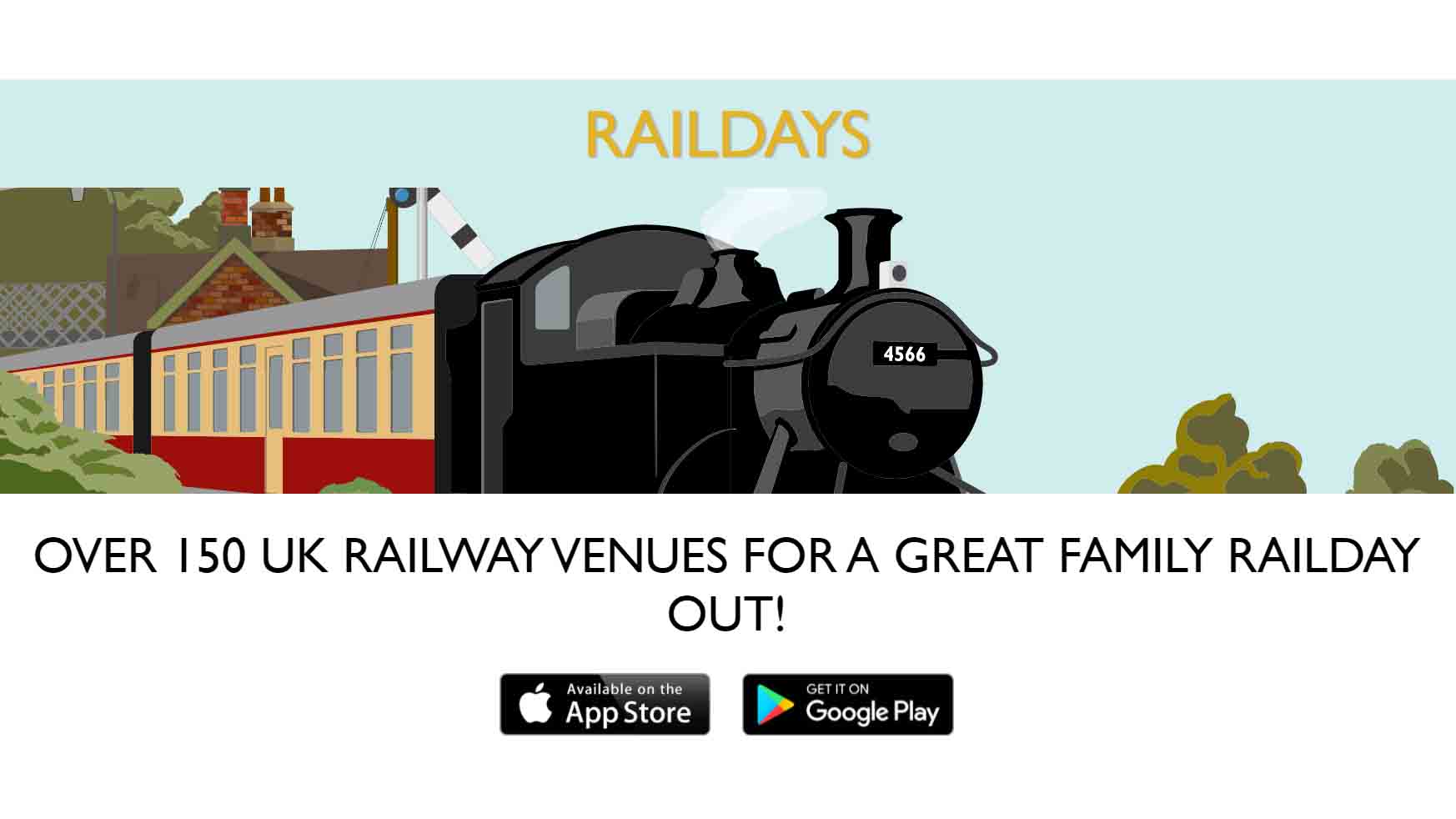