Author Gary Dolzall recalls the Union Pacific’s penchant for big motive power, which culminated with the super diesels of the 1960s.

If an entire railroad can become synonymous with a single word, then for Union Pacific that word was “big.” As in big railroad – and big motive power.

For many train enthusiasts, the list of Union Pacific’s leviathan locomotives begins with “Big Boy” – which is to say the 25 examples of UP 4000-class 4-8-8-4s that rolled out of Alco’s Schenectady (N.Y.) works in the years 1941-1945. With tender, each Big Boy weighed in at more than a million pounds and, thanks to the restoration to service of Big Boy 4014 by the Union Pacific in 2019, the landmark locomotive is alive and well today.

But Union Pacific’s penchant for big locomotives began before Big Boy and continued for decades after the 4-8-8-4s rolled out of Schenectady, embracing not only steam but gas-turbine and diesel propulsion.

Chronologically, the list arguably begins with another steam type and wheel arrangement that was unique to UP – the 4-12-2. Constructed by Alco between 1926 and 1930, the 9000-series 4-12-2s were powered by three cylinders and totaled 88 in number. They were, fittingly, called the “Union Pacific” type.

As the steam era was coming to a close (the last regular-service revenue run of a Big Boy was in 1959) and standardized diesels such as Electro-Motive F-units came to dominate North America’s mainlines, Union Pacific’s quest for super power initially turned to the intriguing but unproven gas-turbine-electric. Led by David Neuhart, UP’s chief mechanical officer, and working with Alco and General Electric, the railroad would, beginning in the early 1950s, bring to its mainlines three classes of gas turbines that culminated in 1955 in the extraordinary GE 8,500-horsepower “Big Blow” turbines. Although the turbines burned what at the time was inexpensive “bunker C” fuel oil, their appetite for such was nearly insatiable and, inevitably, the eyes of Neuhart and his UP mechanical team turned toward big diesels.

In 1963, Neuhart put out the call for diesel designs that would deliver 15,000 horsepower in three-unit sets (e.g., 5,000 horses per unit). The three major U.S. locomotive builders – Electro-Motive, General Electric, and Alco – each responded. Alco and GE’s designs were similar in concept: The per-unit horsepower requirement would be achieved with two diesel powerplants riding in a carbody atop span-bolstered trucks forming a B-B+B-B wheel arrangement (a wheel arrangement UP’s early turbines had also used). GE’s model – the U50 – was rated at 5,000 horsepower; Alco’s offering – the C855 – housed two 2,750-horsepower V-16s per unit and thus was rated at 5,500 horses. In either case, three of the giants lashed together would provide the desired 15,000 (or more) horses UP had specified.

Electro-Motive, the market leader at the time, came forth with a different idea. It would create a new four-axle “D-type” version of its Flexicoil truck design and place two 2,500-horsepower 567-series V-16 engines in a shared carbody to create a 5,000-horsepower unit. But rather than stringing together three of the D-D units – soon to become the DD35 model – it would satisfy the15,000-horsepower-per-set requirement with a four-unit lash-up that consisted of standard 2,500-horsepower GP35s on each end, with a pair of DD35s between.

In 1963-64, UP acquired 23 of GE’s U50s (all cab-equipped), a lone cab-booster-cab three-unit set of Alco’s C855, and 27 cabless DD35s, two of which had briefly served as EMD demonstrators. With its own appetite for innovative power, neighbor Southern Pacific also sampled the U50 and EMD DD35, ordering three of each. Union Pacific soon returned to EMD and placed an order for more of the big D-D diesels, this time with cabs. Designated DD35A, the 15 cab-equipped units also were distinctive in using flared radiator panels.

In 1966, Electro-Motive introduced its new 645-series powerplant and its “40 line” of diesel models. EMD cataloged a 6,000-horsepower DD40, but there were no takers, with much of the U.S. railroads’ interests (UP included) instead focused on EMD’s new, husky, 20-cylinder, 3,600-horsepower SD45. Union Pacific soon, though, had a unique need – with the price of fuel oil steadily climbing, the appetites of its Big Blow turbines were becoming ever more problematic (the last of the turbines would be retired in 1970). So, in 1968, Neuhart again went looking for big diesels. The result was two locomotive types – GE’s U50C (which would in fact ride on retired three-axle trucks from the turbines) and EMD’s massive and majestic, 6,600-horsepower DDA40X. In effect a pair of souped-up 645-series-powered GP40s tucked into a single unit, the DDA40X would ride the same design four-axle Flexicoil trucks as the earlier DD35/A yet would differ visually by adopting the “cowl” nose styling from EMD’s FP45 and F45 models. With Electro-Motive in the preliminary stages of developing the electronics for its future “dash 2” line, a number of those still experimental features were included in the new units, thus the “X” in the DDA40X designation.

The year 1969 marked the 100th anniversary of the driving of the Golden Spike that bound together the Central Pacific and Union Pacific – and America – at Promontory Point, Utah, on May 10, 1869. Thus, the DDA40Xs would be given “6900” series numbers and named “Centennials.” The first – DDA40X 6900 – was rushed to completion in time for the anniversary and then, between 1969 and 1971, a total of 47 DDA40X units would be constructed.

The era of the super diesels on the Union Pacific would extend through 1985, when the last of the DDA40Xs was retired from regular service, by which time many of the

Centennial diesels had rolled up more than 2 million miles of duty. Among the earlier twin-powered diesels, GE’s U50s and U50Cs remained in service through 1977 and 1978, respectively, while the EMD DD35 and DD35A saw service into 1981. The lone trio of Alco C855s were not so fortunate and were retired in 1970, and have spent much of their time in storage.

While none of the super diesels of the early 1960s were preserved, no less than a baker’s dozen of the Centennial diesels have been saved, including UP 6900 (in Omaha, Nebraska), 6930 (at the Illinois Railway Museum, where it is joined by UP “Big Blow” turbine No. 18), and Centennial 6936, which UP retains as part of its Heritage Fleet. 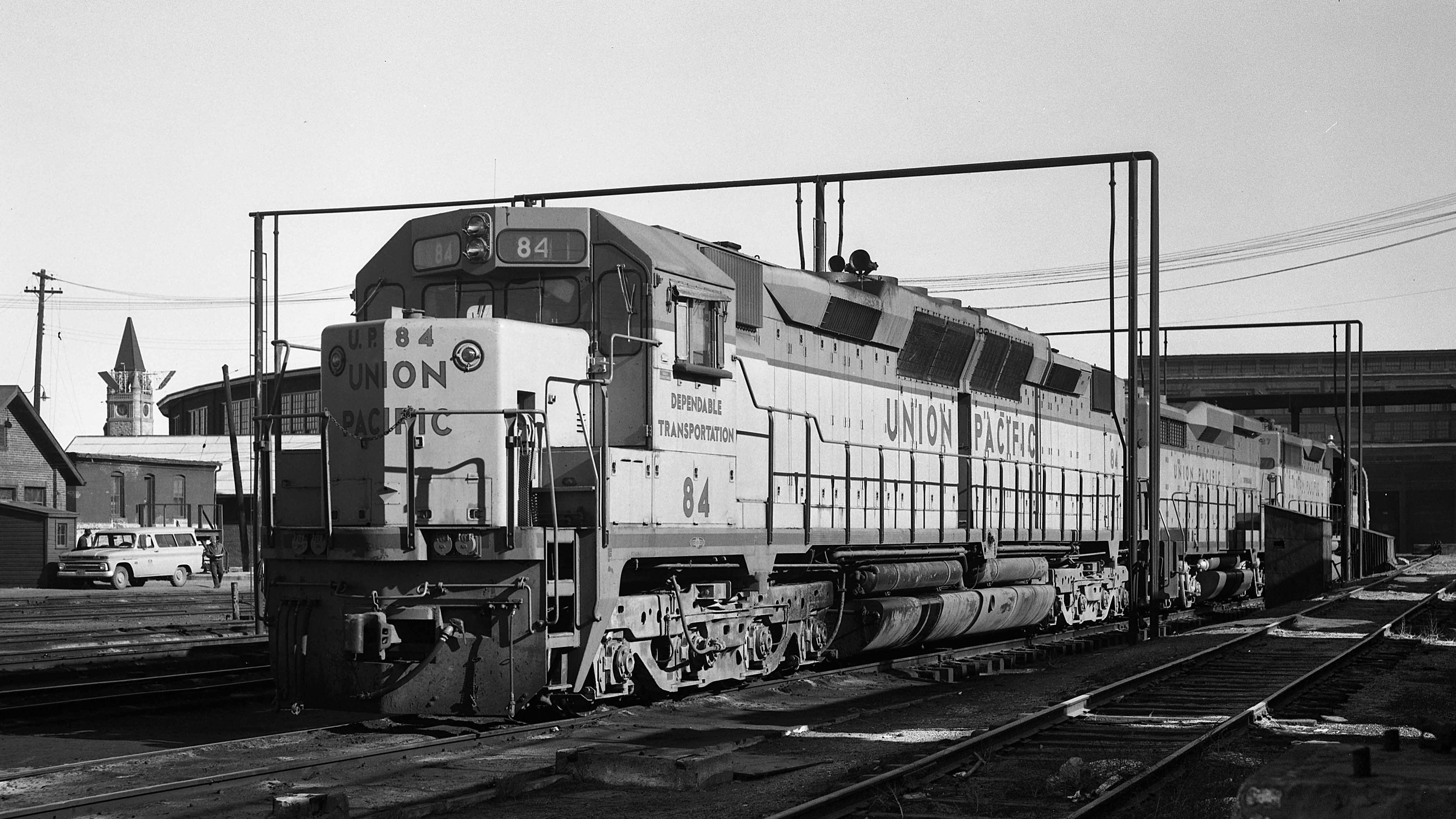 Across the decades – and across the eras of steam, gas turbine, and diesel power – Union Pacific had a penchant for super power. Standing outside the historic Cheyenne (Wyoming) roundhouse and with the spire of UP’s classic Cheyenne depot in the background, 5,000-horsepower, eight-axle Union Pacific DD35A 84 stands ready to tackle the grades of nearby Sherman Hill. 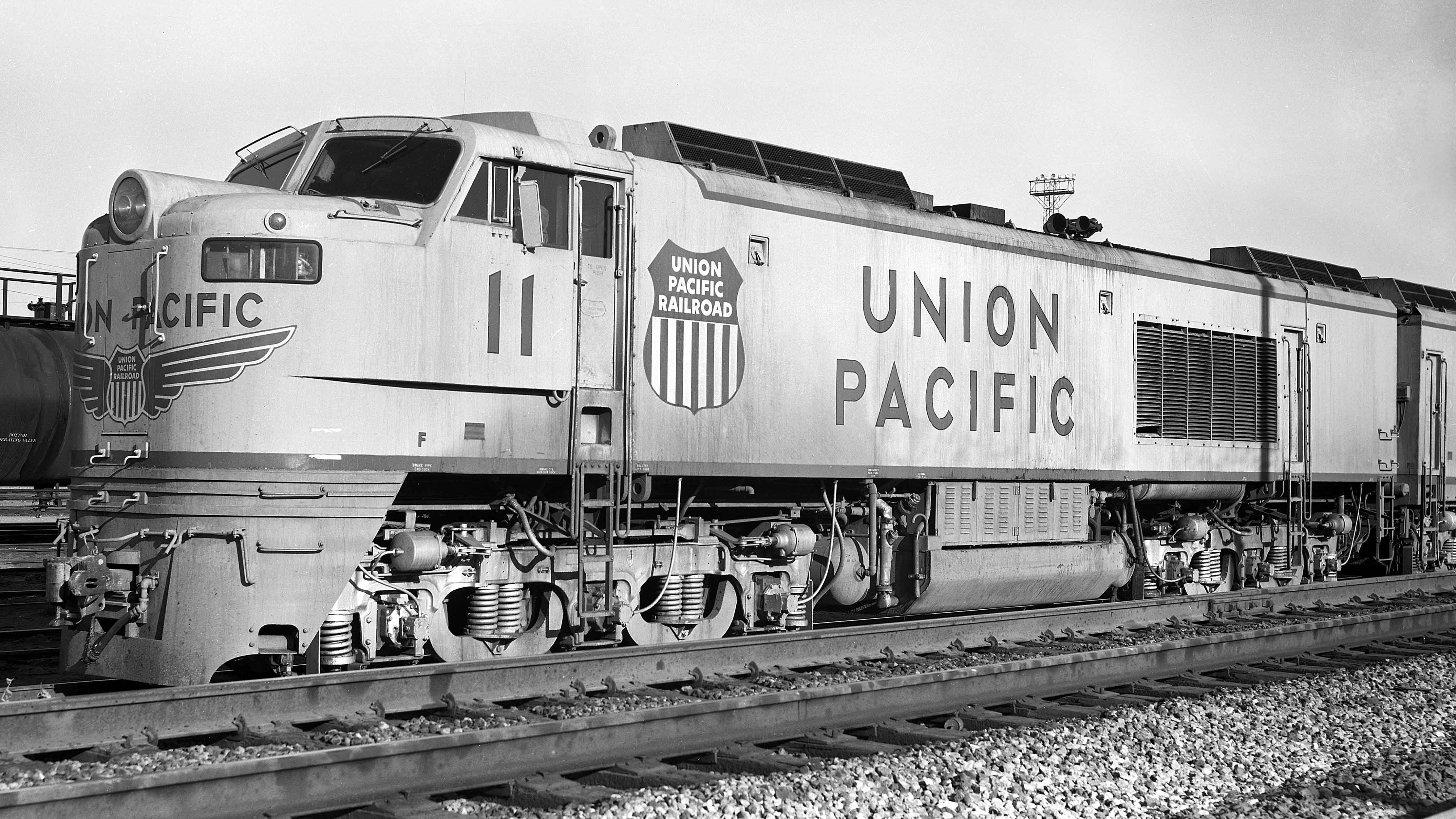 As the end of the steam era neared, Union Pacific first turned to the innovative use of gas turbine-electric super locomotives. Beginning in the early 1950s, Union Pacific purchased three classes of gas turbines, which culminated in 1955 with the General Electric 8,500-horspower “Big Blow” turbines. Near the end of its career, UP “Big Blow” No. 11 stood at Ogden, Utah, in 1968. 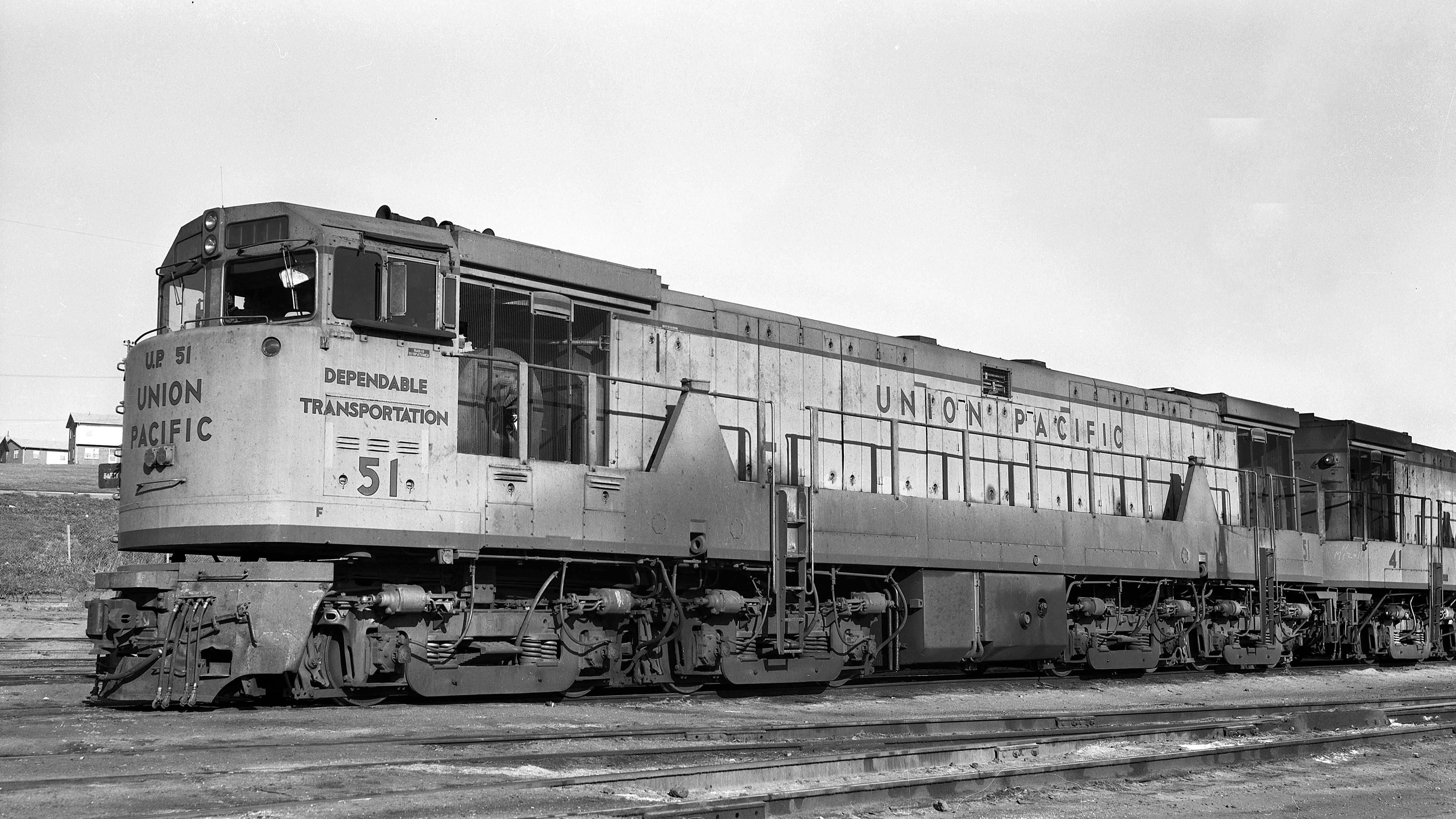 In response to Union Pacific’s early 1960s call for super diesel power, General Electric’s entry was the 5,000-horsepower U50, which rode atop span-bolstered trucks forming a B-B+B-B wheel arrangement. Union Pacific rostered 23 of the big GEs, such as No. 51, captured on film at Kansas City, Kansas, in 1968. 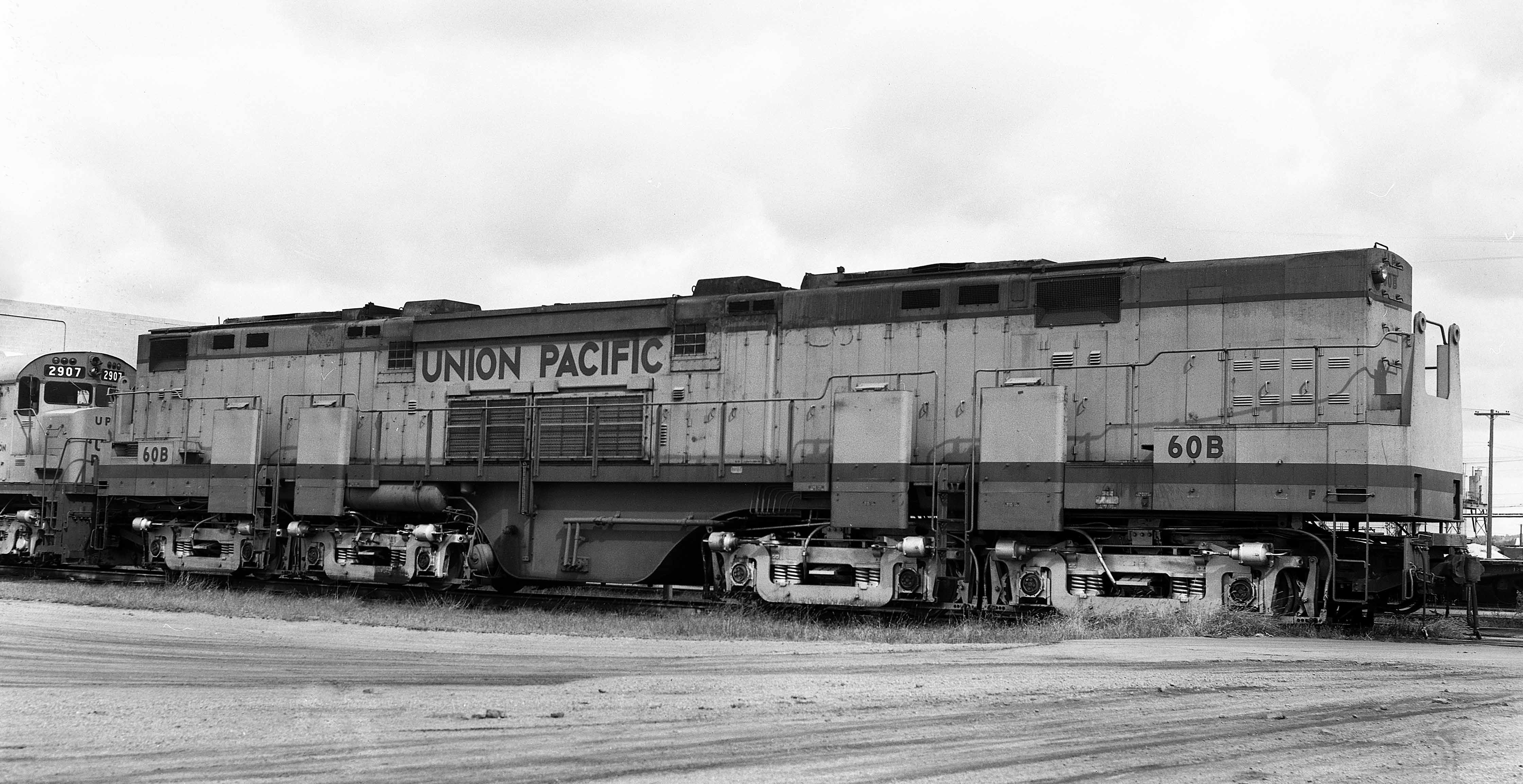 Alco’s super power offering was the 5,500-horsepower C855, of which Union Pacific acquired only one set (two cab units and one booster) in 1964. As orphans on the UP, the Alcos spent much of their short careers in storage before being retired in 1970. 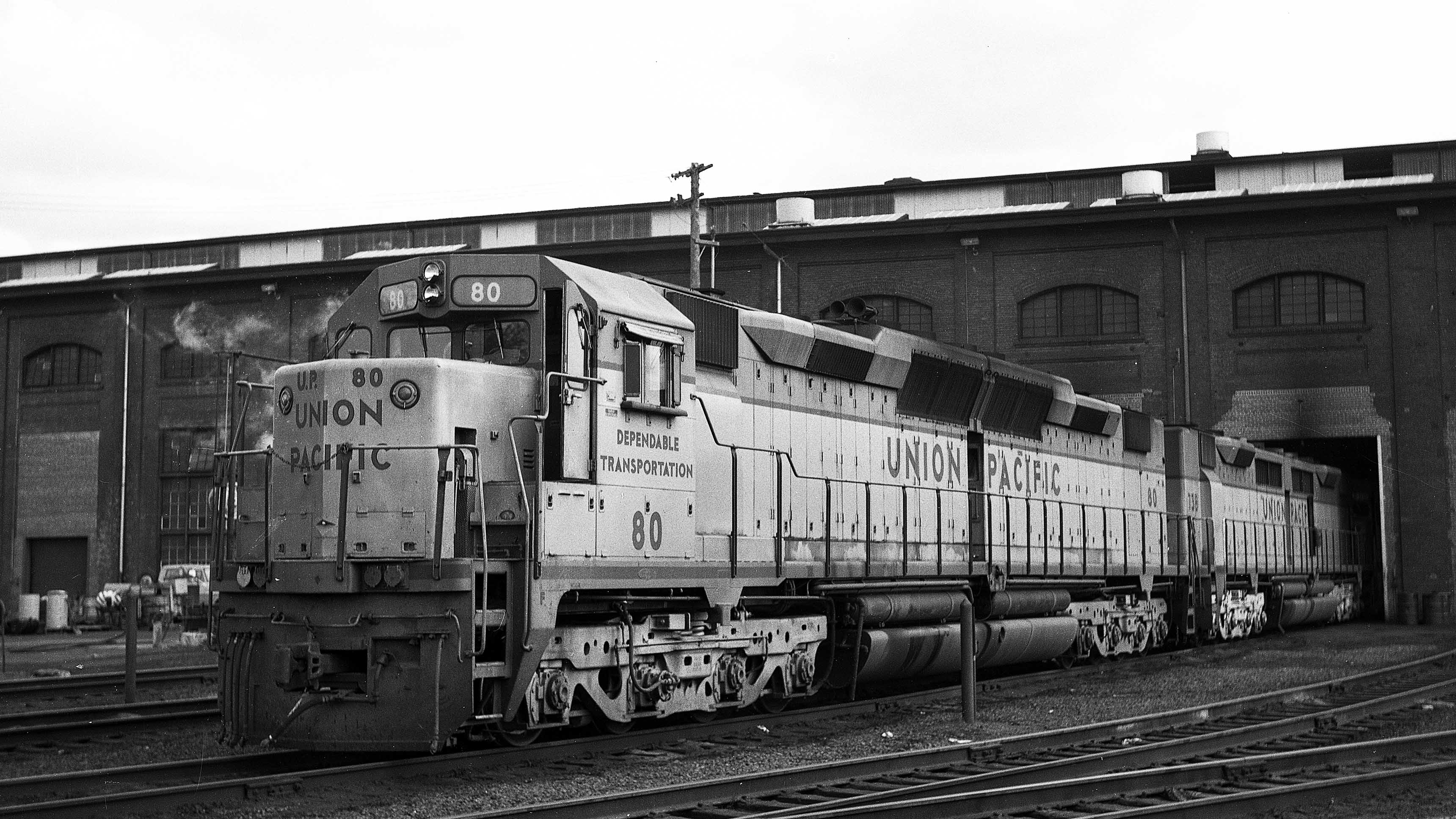 Given Electro-Motive’s dominance of the diesel marketplace during the 1960s, it was no surprise EMD was most successful in claiming Union Pacific’s super power orders. EMD originally offered the cabless DD35, of which 27 were constructed in 1964, then at Union Pacific’s request added a cab (as the DD35A). UP in 1965 acquired 15 of the cab equipped behemoths such as No. 80 captured at Portland, Oregon (above). Union Pacific’s big neighbor, the Southern Pacific, also sampled 1960s super power, purchasing, in 1964, three DD35s (such as No. 9502, below) and a trio of General Electric U50s. 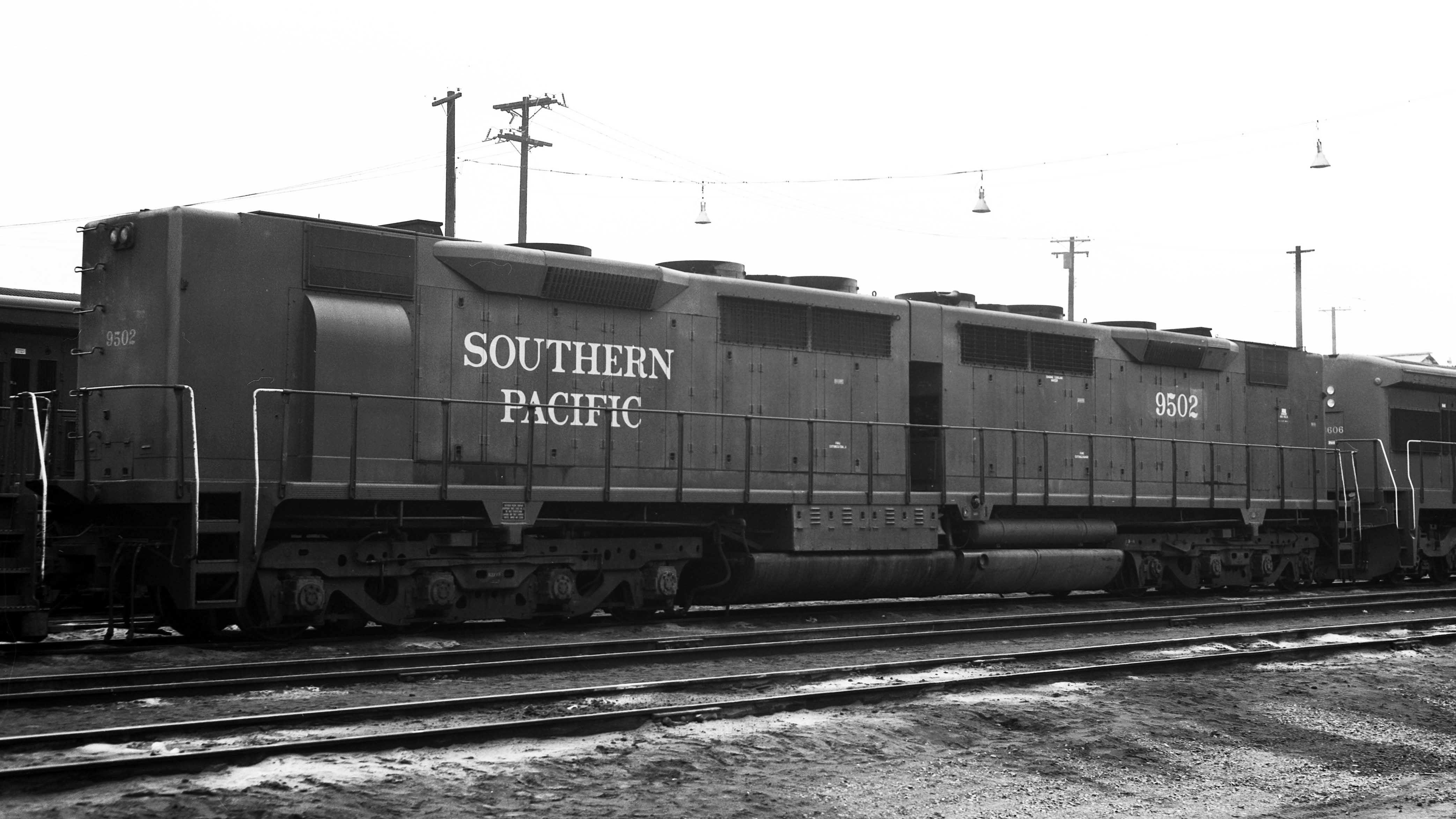 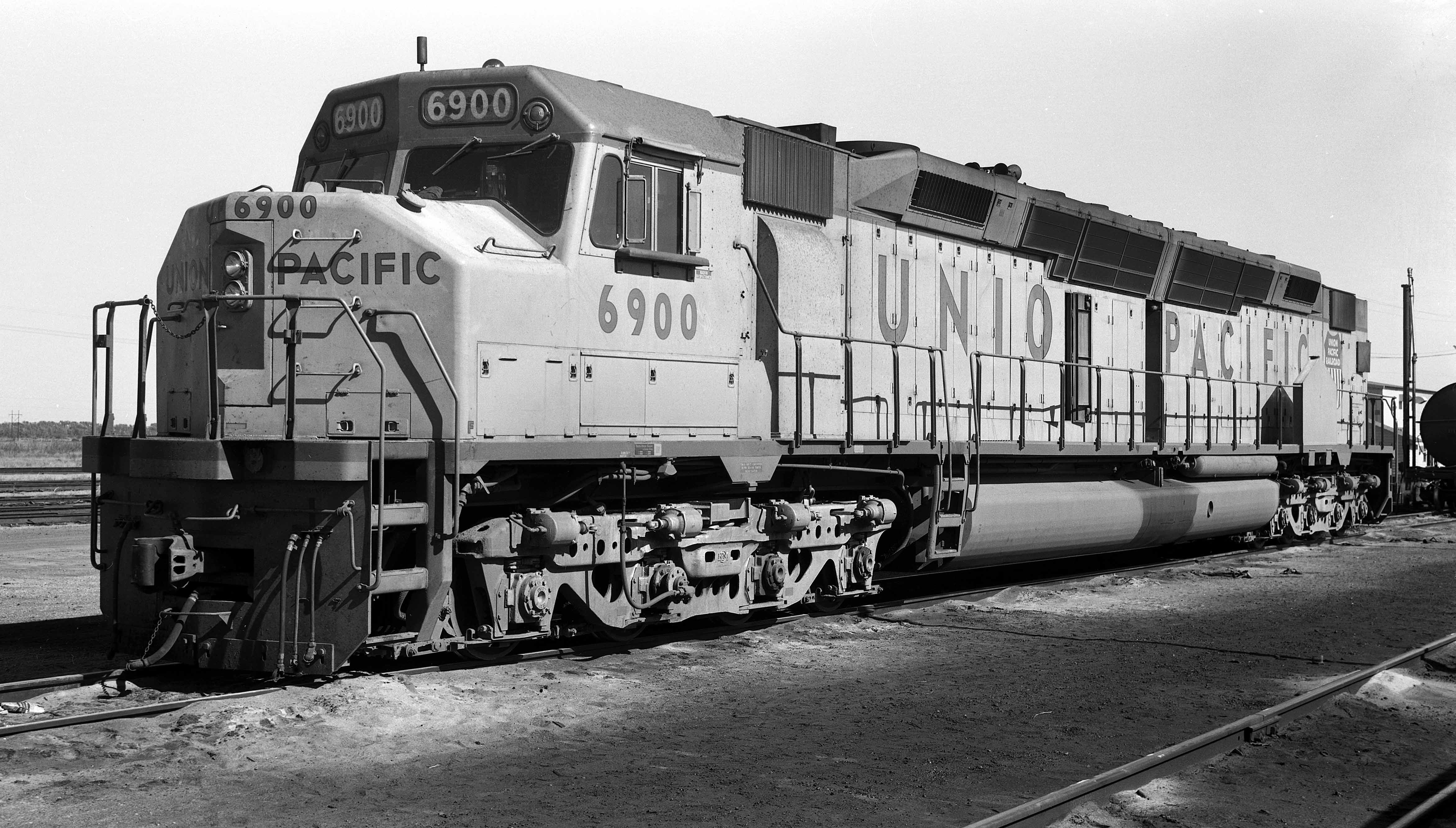 The need to replace its fuel-hungry gas turbines brought Union Pacific back to the marketplace for super diesels in the late 1960s, and the ultimate result was the extraordinary Electro-Motive 6,600-horsepower DDA40X. The year 1969 marked the 100th anniversary of the driving of the Golden Spike. Thus the DDA40Xs were given “6900” series numbers and named “Centennials.” The first – DDA40X 6900 – was rushed to completion at EMD in time for the anniversary. 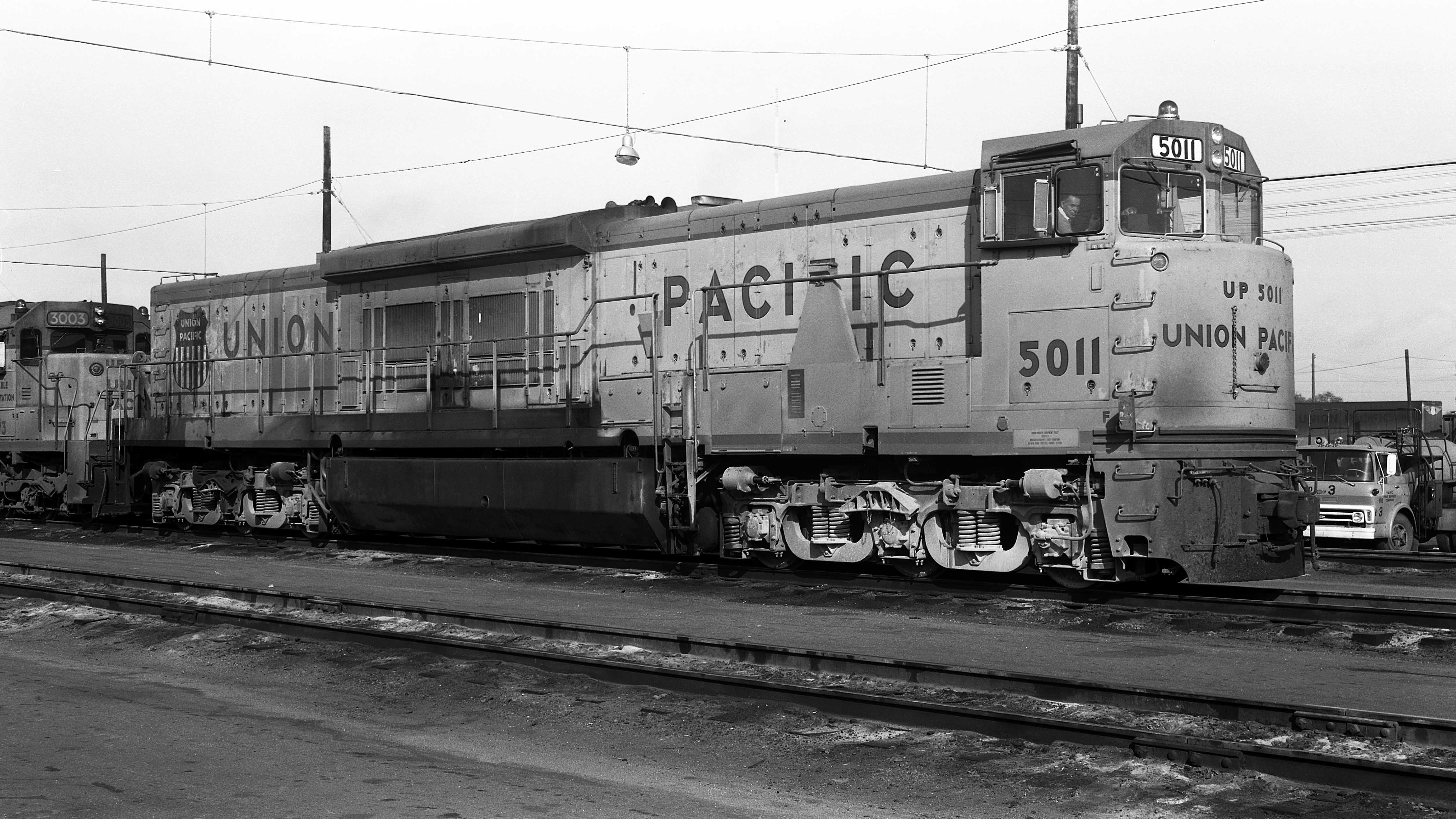 Along with 47 EMD DDA40Xs, Union Pacific also purchased 40 unique General Electric U50Cs between 1969 and 1971. The husky, flat-faced diesels rode on three-axle trucks from retired “Big Blow” turbines. Not particularly successful, all were retired by 1978.

Readying to haul tonnage across Union Pacific’s great transcontinental mainline, UP DDA40X 6909 and a sister begin their pull from Cheyenne, Wyoming, in November 1969. Many of the Centennial diesels would roll up more than two million miles of service before retirement, and happily a baker’s dozen of the big diesels have been preserved.