Though We Are Railfans has focussed mainly on the standard gauge railways that thread across the USA, UK and Europe, 'rail' of course encompasses a much wider selection of transport systems, including monorail, metro, light rail and tramways. These often localised forms of rail transport do not always have the vast following that conventional railways do, but nevertheless can be a fascinating glimpse into the way rail can be adapted for a variety of uses outside of long or medium-distance passenger and freight lines.

We looked in a previous article at the since-lost tramways of Cairo, which we were glad to have shared with local archive groups for an exhibition about the trams earlier this year. In this article, we use the same source of images to this time look at the colourful array of trams in Hong Kong. You might remember that this archive of photographs originated from an anonymous photographer whose collection appeared at the West Somerset Railway in 2020 and was obtained and scanned digitally by We Are Railfans.

Hong Kong Tramways first appeared on the scene under British Rule in 1904 and has gone to become part of the fabric of what is now a special administrative region of China. Public transport as a whole has been a huge success in the region, with ease of use and environmental concerns in recent decades fuelling its popularity with locals and tourists. A draw for the latter is the vibrant and colourful trams themselves, which are exclusively double-decker and often feature candid branding and advertising from some of the world biggest corporate brands.

The selection of photographs below are believed to date from the late 1980s or early 1990s, during a time when the digital age was still forming in its infancy. As a result, the brands featured are almost certainly not a reflection of the appearance of these trams today. Recent advertising campaigns splashing logos and colours on the trams including that of Bitcoin, Swatch and DKNY. As for the trams themselves, many now date from the 21st century with older examples retired decades ago. 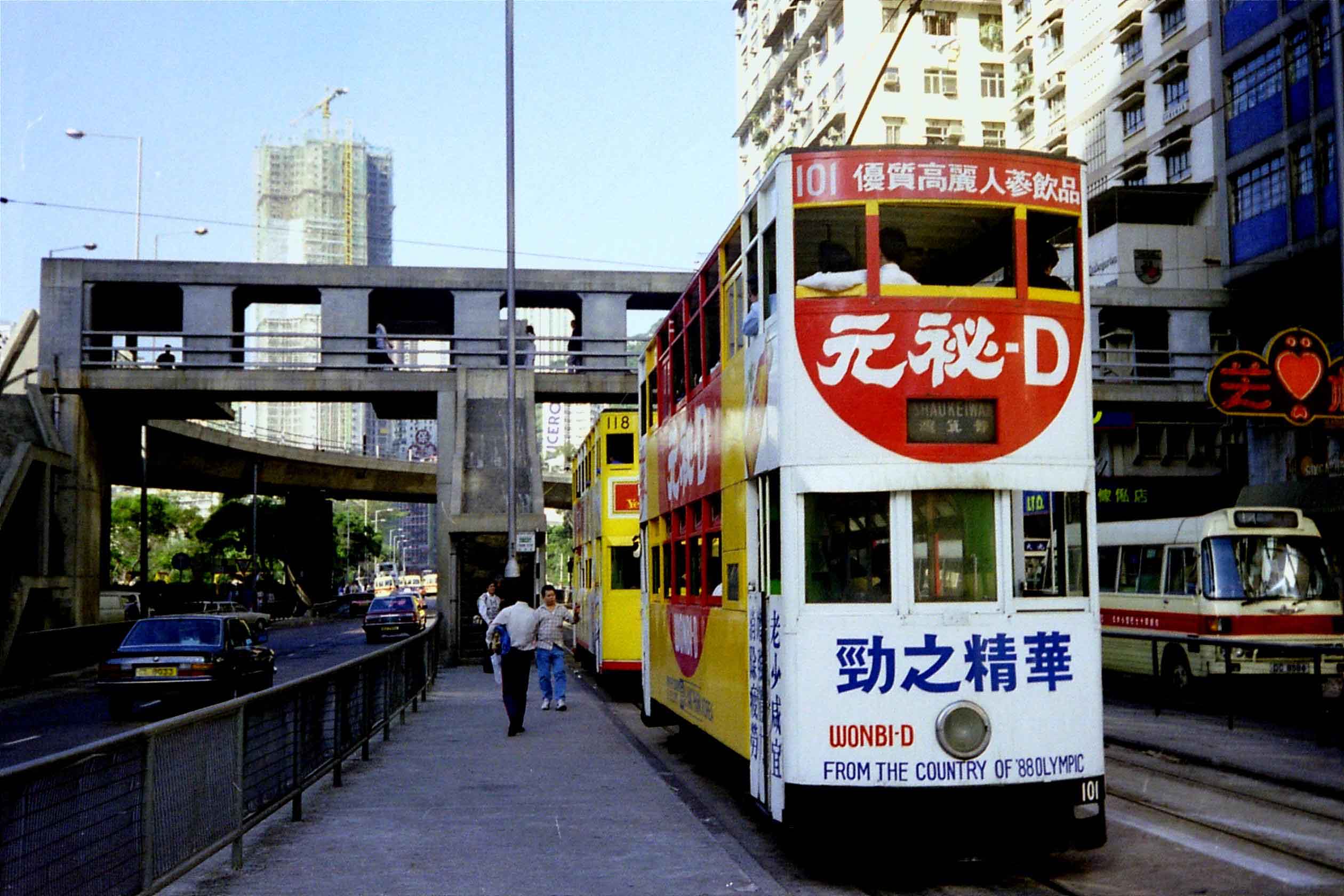 Hong Kong Tramways take people through immensely built up areas of urban development in a city that now has the highest density of skyscrapers in the world. Tram nos.101 & 118 are seen here, the former promoting a Korean health tonic 'Wonbi-D'. 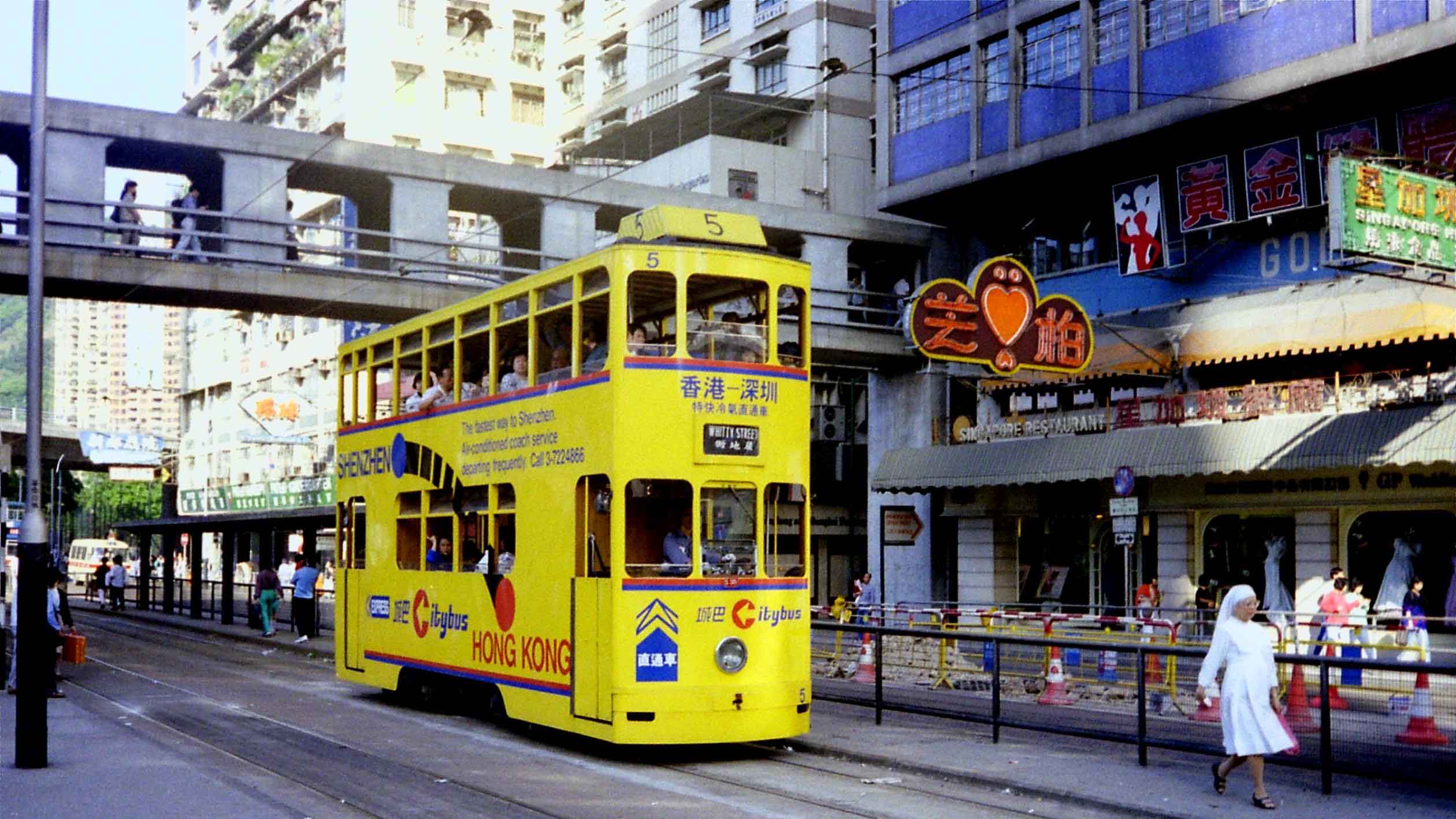 The history of each individual tram can be hard to trace with a raft of rebuilds, refurbishments and replacements conducted over the last century. No. 5, seen here with a striking yellow Citybus livery, may have been recently refurbished at the time that this photograph was taken. Like many others, this took place from 1986 but it is not known for certain what year these photos were captured. 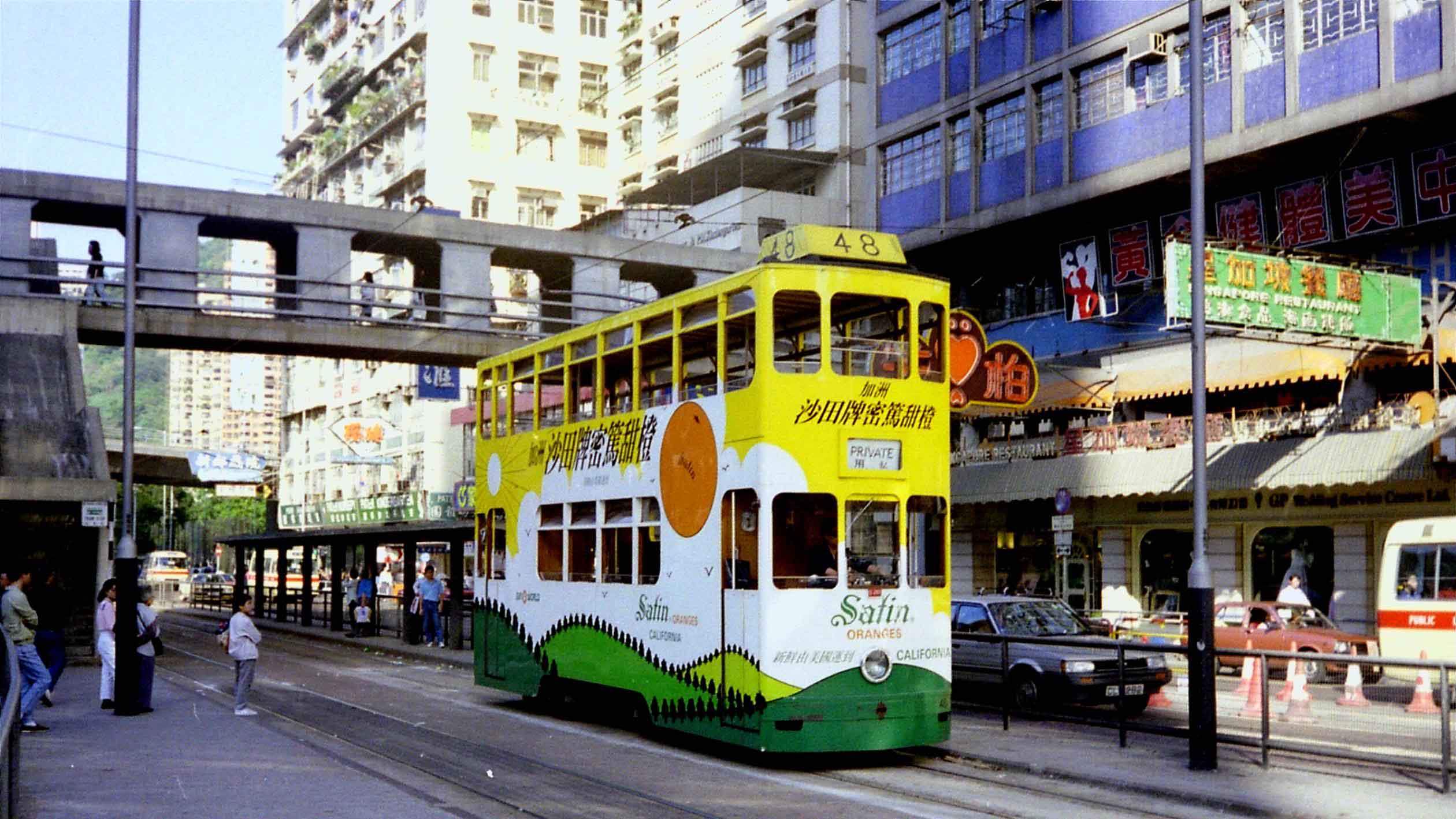 In the same location, no. 48 passes with paintwork depicting the Satin brand of Californian Oranges. This example too seems to be from the batch refurbished in the late 1980s. It is possible a number of trams seen in this article have since been replaced or retired. 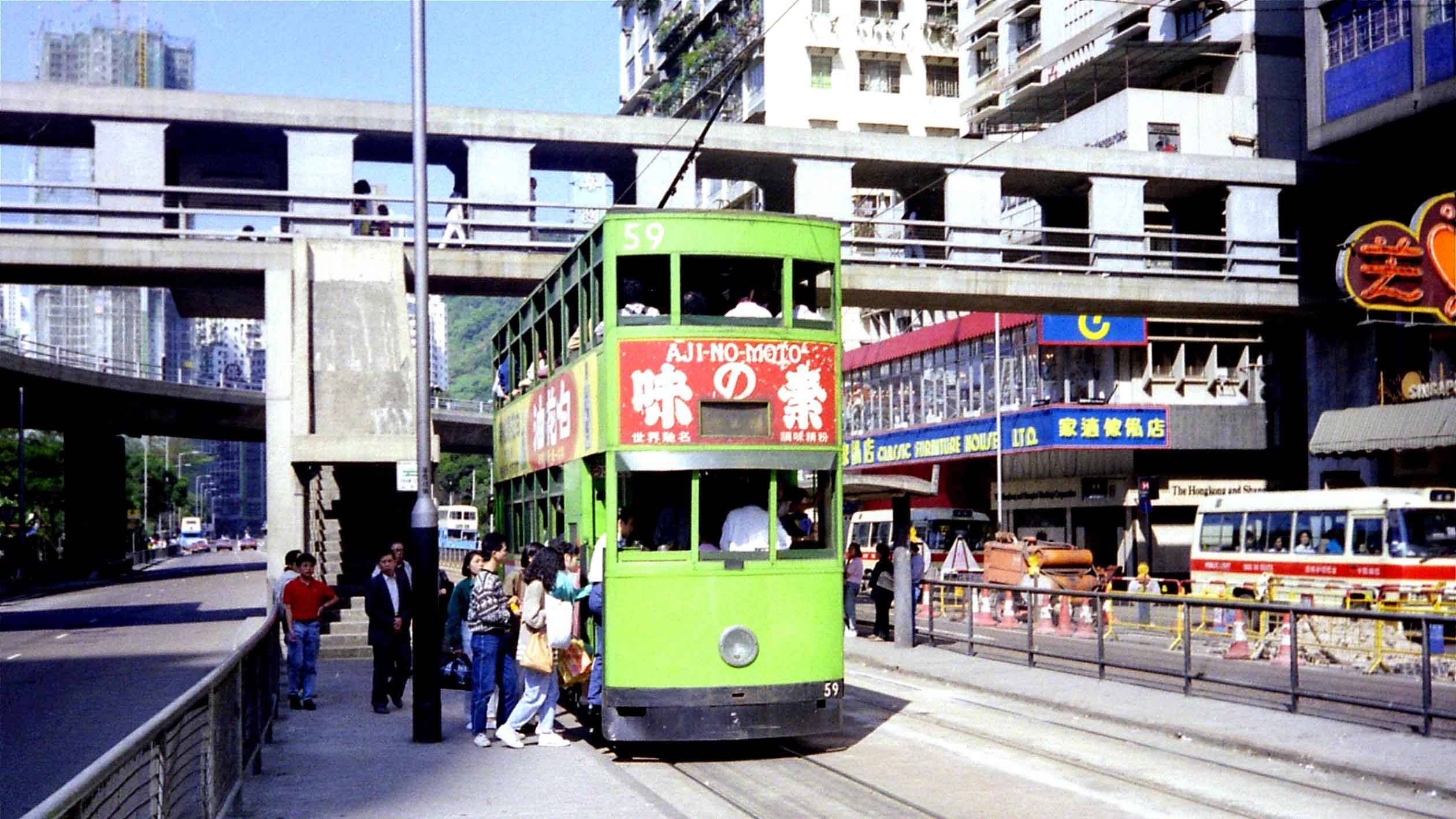 Our railfan spent some time in this location, at Shelter Street in the Causeway Bay area. Today the building on the far right is very different but the footbridge and skyscrapers behind still remain. Tram no. 59 displays the food company brand Aji-No-Moto on a bright green body. 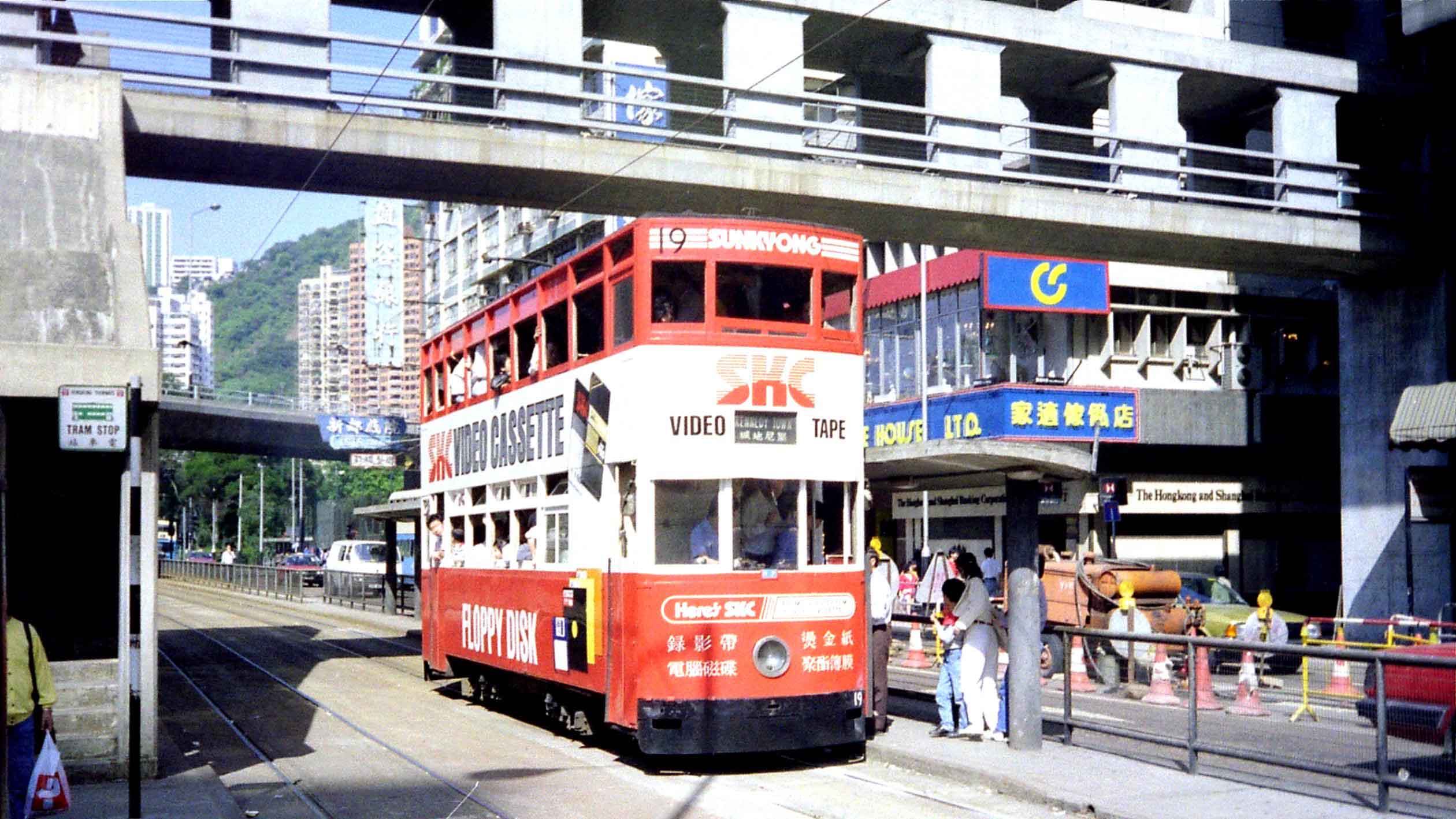 The age of the photographs really shows in this shot, again at Shelter Street. SKC produced magnetic video tapes from 1979 and here Tram no.19 displays examples of their video cassette and flopppy disk products. Though this form of media has long since been made redundant, SKC remains trading as the SK Group. 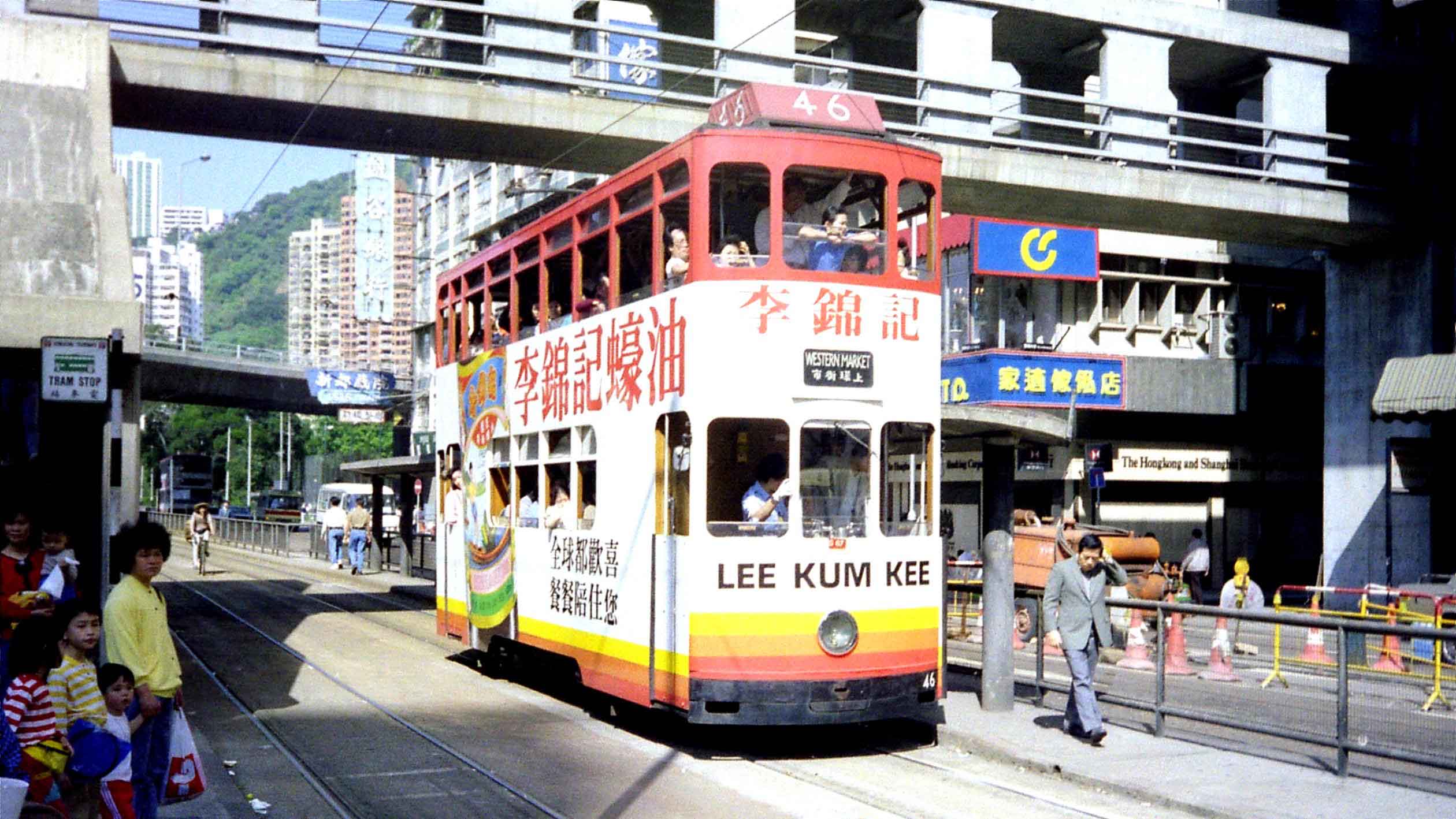 On the other hand, Lee Kum Kee, who make a range of asian sauces are very much still in business. Tram no.46 passes Shelter Street seemingly with a full load of passengers and tourists. 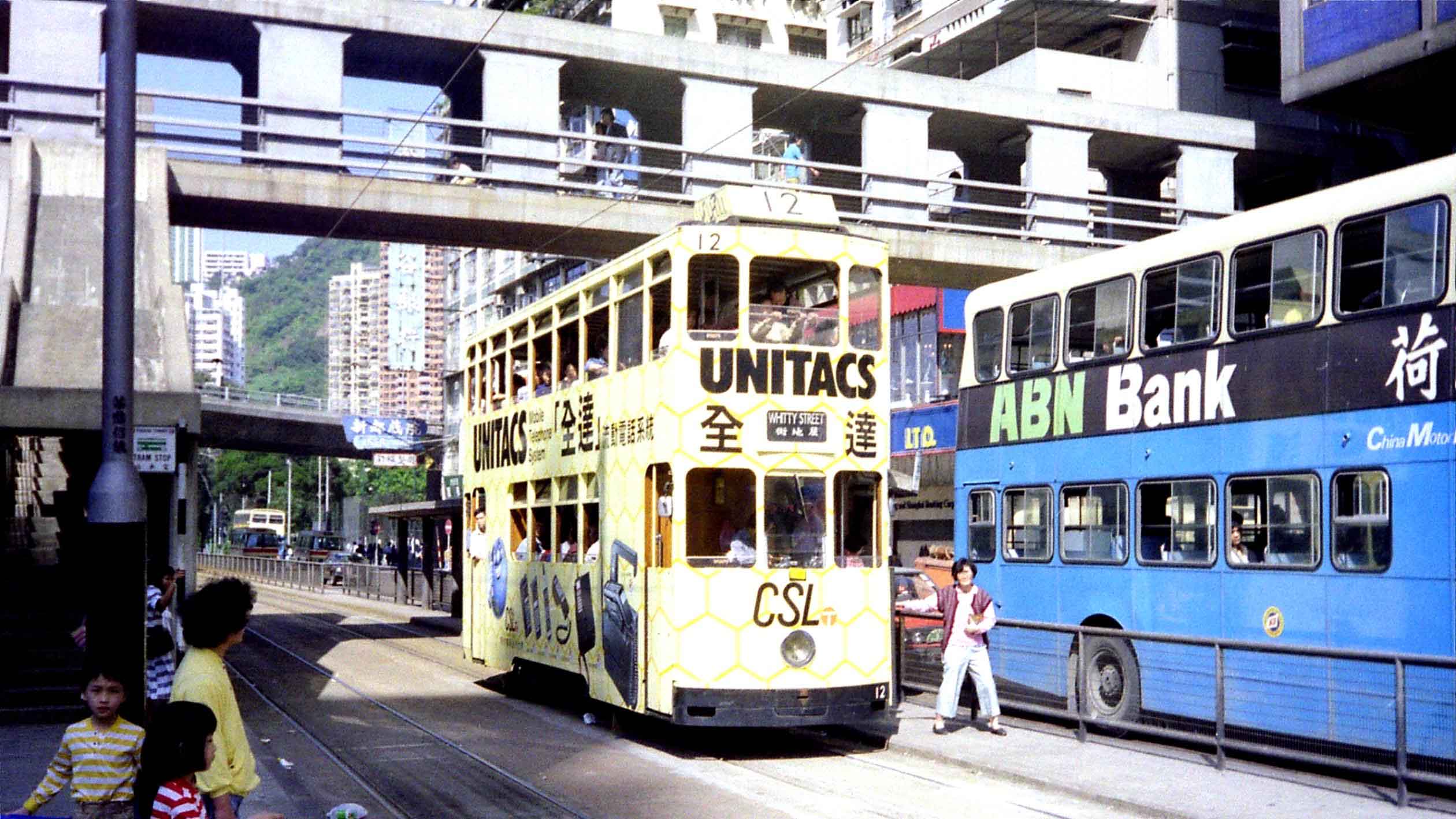 A honeycomb livery adorns no.12 along with, what was then, an innovative 'Mobile Telephone System' developed by Unitacs. The devices shown on the side of the tram bear little to no resemblance to the mobile telephone systems we use today. The concept of an iPhone would have been considered futuristic at this time and video calling was something seen in science fiction such as Star Trek. 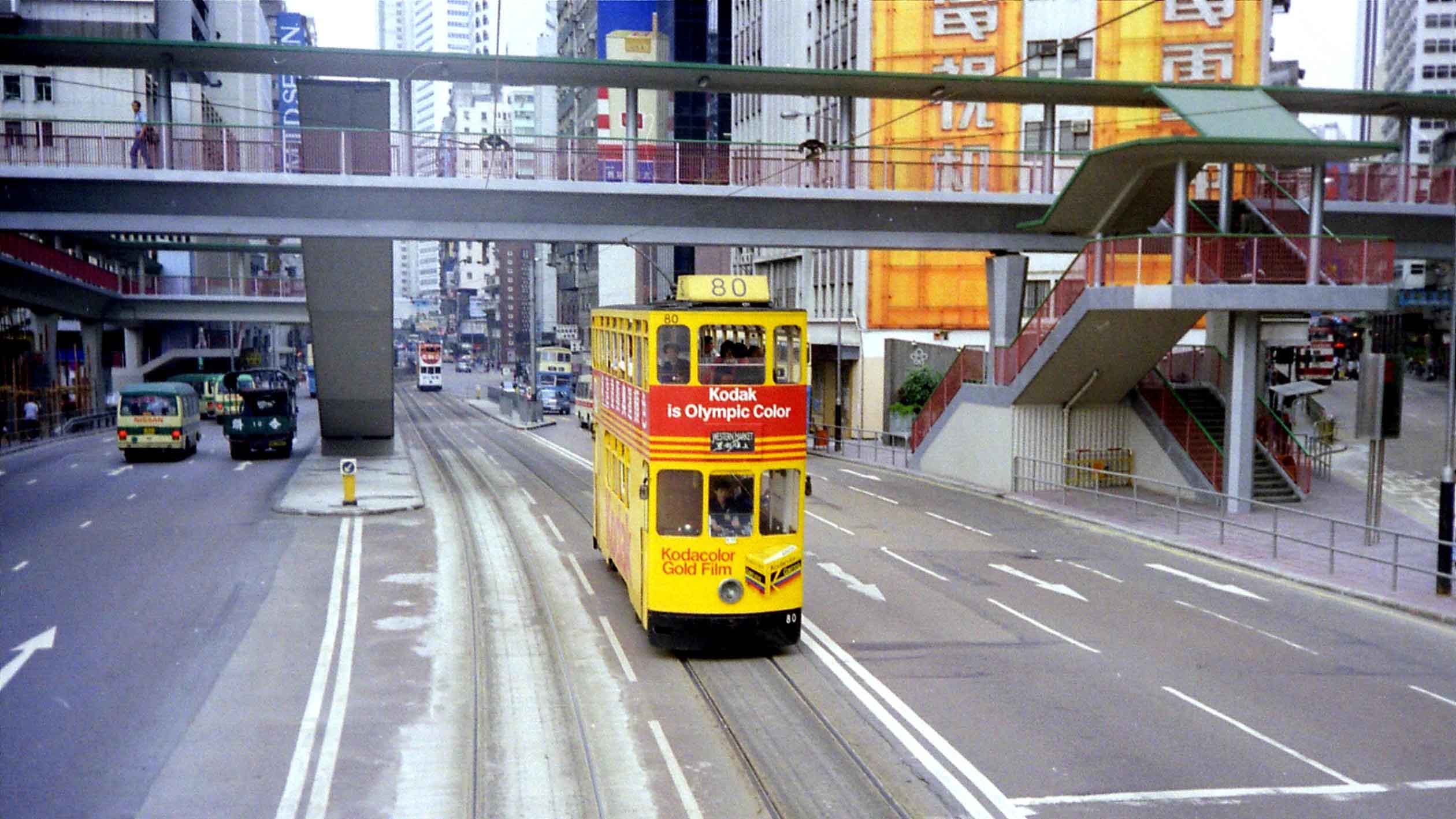 The American brand Kodak is still familiar even though the technology behind photography has advanced well beyond physical film. Here, a photograph is taken from a tram, of a tram, from a camera, of a camera brand in a way that today we might describe as somewhat 'meta'. 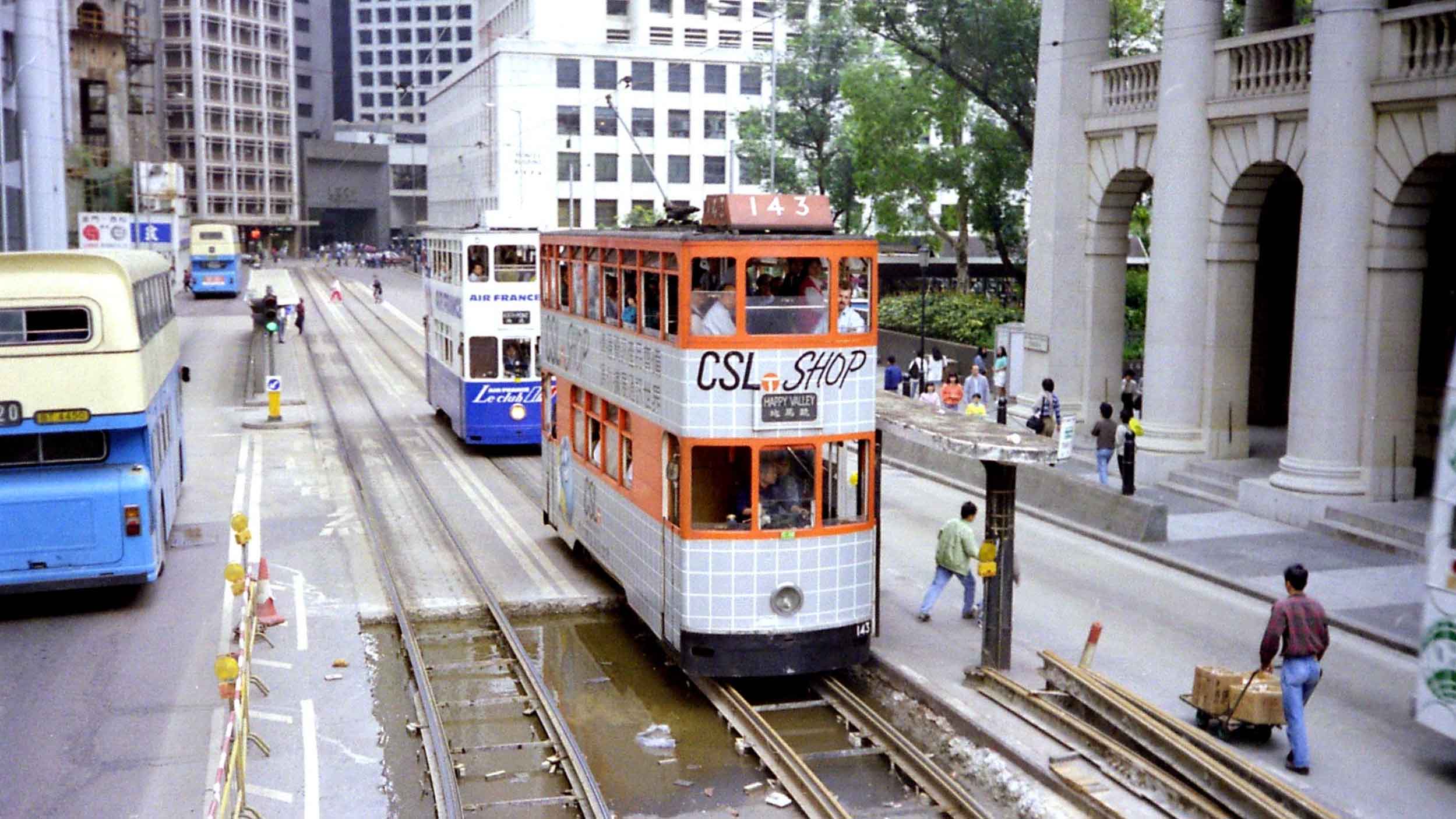 Some maintenance seems to be underway outside the Court of Final Appeal near Statue Square. Tram no.143 with CSL branding is followed closesly by an unidentified tram displaying Air France livery, presumably at a time when Concorde was the star product of both themselves and British Airways. 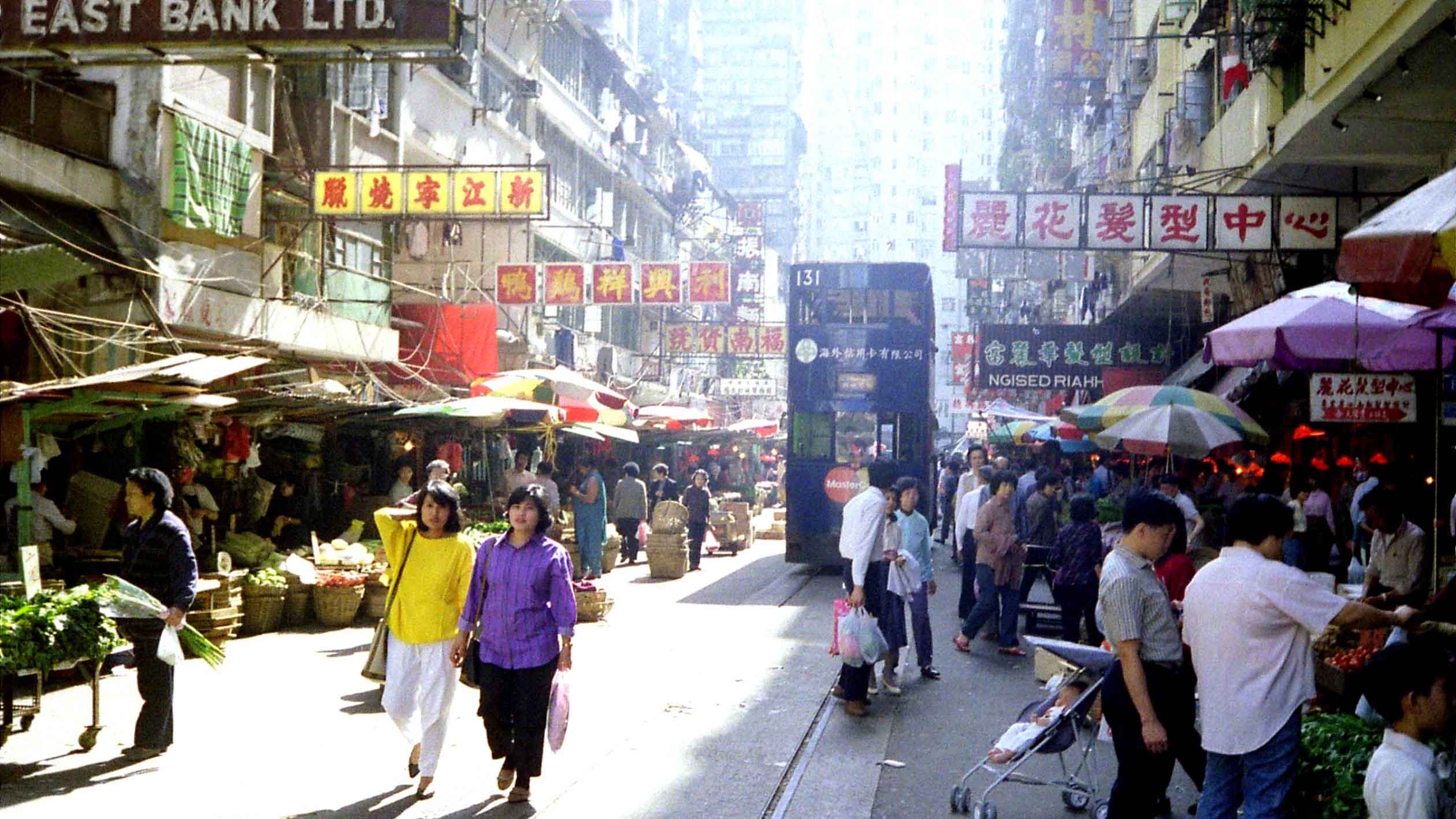 A vivid and true depiction of bustling Hong Kong is captured here with Tram no.131 attempting to make its way through the busy streets and market. The dazzling array of signage is imitated in the bold advertising across Hong Kong's Trams, which even today seem to outdo similar efforts on London buses, New York Taxis and other notable 'moving billboards'. 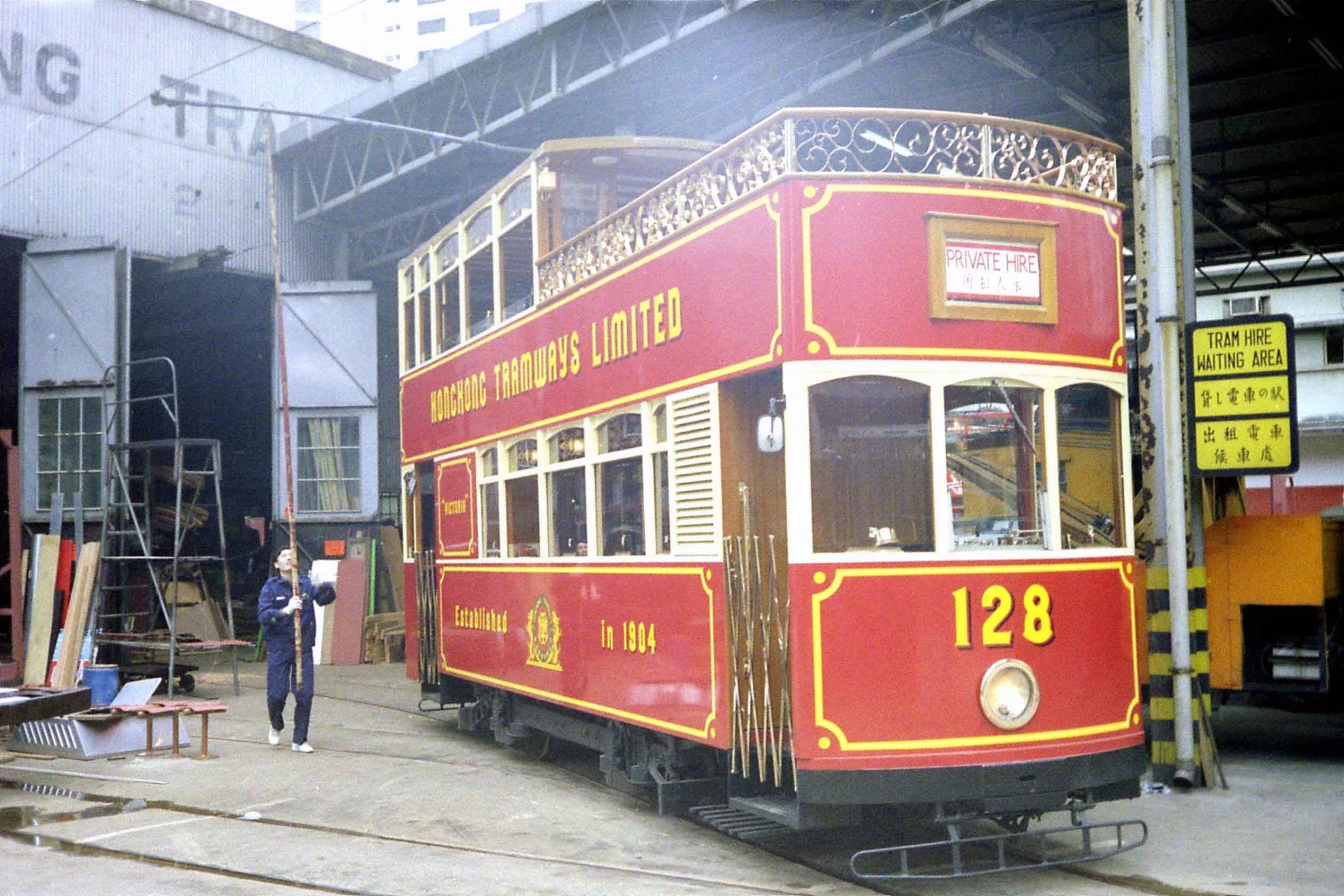 This photograph is special for a number of reasons. Firstly, it is believed to show the old Sharp Street Depot, which was decommissioned in 1988. That would place these images before then, perhaps even in the year it was closed. Secondly, it shows the HKT workers in action, moving the trolley pole and thirdly the Tram itself, no.128 is one of only two Hong Kong Trams in this style. It is still in service but used only for private hire, as it seemed to be back here, as indicated by the destination blind.