The time was the 1930s. The diesel locomotive was coming – and coming fast – to American railroading. Thanks to the likes of the Burlington Route’s shovel-nosed and stainless-steel Zephyrs, Union Pacific’s M-series lightweight trains, and a new series of “E-units” debuted by Electro-Motive in 1937, the diesel was becoming all the rage for passenger service.

But the big prize still awaited – capturing the market for diesel freight-service locomotives. Despite the presence of steam-era heavyweights Alco, Baldwin, and Lima, no locomotive builder was better positioned to claim the prize than Electro-Motive, which in 1930 (along with its diesel powerplant manufacturer, Winton) had been purchased by the General Motors Corporation.

Electro-Motive’s early endeavors, which included providing the power for the Budd-built CB&Q Zephyrs, Union Pacific’s Pullman-Standard-built M series, Illinois Central’s Pullman-Standard-built Green Diamond, landmark box cab passenger diesels for Baltimore & Ohio and Santa Fe, and its own early diesel switchers and E units (B&O EA No. 51 was the first), had called upon the Winton 201A-series engine, a two-cycle powerplant built in 8-cylinder (600 horsepower), 12-cylinder (900-horsepower), and 16-cylinder (1,200-horsepower) variants. EMD’s E-units used pairs of the 12-cylinder Winton engine to produce 1,800 horsepower per locomotive. Although the 201A engine had helped propel EMD into the diesel market, the engine (which in 12- and 16-cylinder variants was of a 60-degree V-design) lacked the durability necessary for heavy railroad use and had only limited potential for horsepower growth. Both would be requisites for a successful freight locomotive powerplant.

It would be engineer Eugene F. Kettering who was destinated to be “the father” of the Winton 201A’s replacement – the legendary and long-lived EMD 567-series engine. The base goal for what would become the 567 engine was straight forward: Design an engine as big and tough as could fit within the confines of a diesel locomotive (and with potential for horsepower growth). Among other requirements, this dictated a 45-degree V-design. But keeping in mind the need for relative ease of maintenance and repair, the pistons, cylinder heads, cylinder liners, and connecting rods needed to be small and light enough to handle without mechanical aids.

As with the 201A, the new engine would be a two-cycle powerplant. The name “567” came from the per-cylinder cubic inch displacement of the engine (compare that to your automobile!). The engine featured forced air induction with a geared Roots blower system and would eventually be built in 6-, 8-, 12-, and 16-cylinder editions. And it was the 16-cylinder edition of the 567, originally rated at 1,350 horsepower, that was to power EMD’s landmark FT freight locomotive, which debuted in 1939.

The 567-series powerplant, in fact, made its service debut in October 1938, powering (in paired 12-cylinder form) Seaboard Air Line’s magnificent E4 diesels, which were purchased to power the railroad’s famed Orange Blossom Special and other premier trains. In short, the 567-series engine proved to be everything that was hoped, and more. Over the next three decades, in models 567A, B, C, D, and E, it was refined, enhanced, and boosted in power and served as the heart of Electro-Motive’s complete diesel line, including thousands of F-units, E-units, switchers, Geeps, and SD “special duty” diesels. And as E.W. Kettering had intended, the powerplant had proven both exceptionally reliable and able to grow hand-over-fist in potency. When in 1963-64 EMD introduced its GP35 and SD35 (and yes, the unique twin-engine DD35/DD35A), the 16-cylinder 567 engine had, with the help of turbocharging, grown from its original 1,350-horsepower to 2,500 horses.

With General Electric entering the market in the 1960s and the railroads thirsting for ever more power, the diesel horsepower race rose to another level, and EMD finally needed a new powerplant. The new engine, destined to power EMD’s “40 Line” of locomotives introduced in 1966, was the 645-series engine, and while it replaced the veteran 567, the new 645 was very much an evolutionary continuation of its predecessor carrying forward many core design elements. Indeed, the most significant change between the old and new was a larger displacement (the “645” again references per-piston cubic displacement).

The last U.S. locomotives built with the 567-serines engine are believed to be an order of SW1200s built for the Houston Belt & Terminal in April 1966. But, of course, the era of the EMD 567-series engine was far from over, and indeed, many 567-powered locomotives remain in service today. The 567 engine also was used in numerous stationary and marine applications.

From a train enthusiasts’ perspective, no mention of the EMD 567 is complete without a comment on its sound. Commonly referred to as a “chant,” the sound of the 567, especially in Roots-blown form, was perhaps the sweetest diesel locomotive voice ever to be heard at trackside. To listen to a lash-up of Electro-Motive Fs or Es or Geeps “rev’ up” from idle, then sing at full throttle, was simply never to be forgotten. Happily, the remarkable story – and the exquisite sounds – of the EMD “567” are bound to continue for decades to come. Thanks, Mr. Kettering. 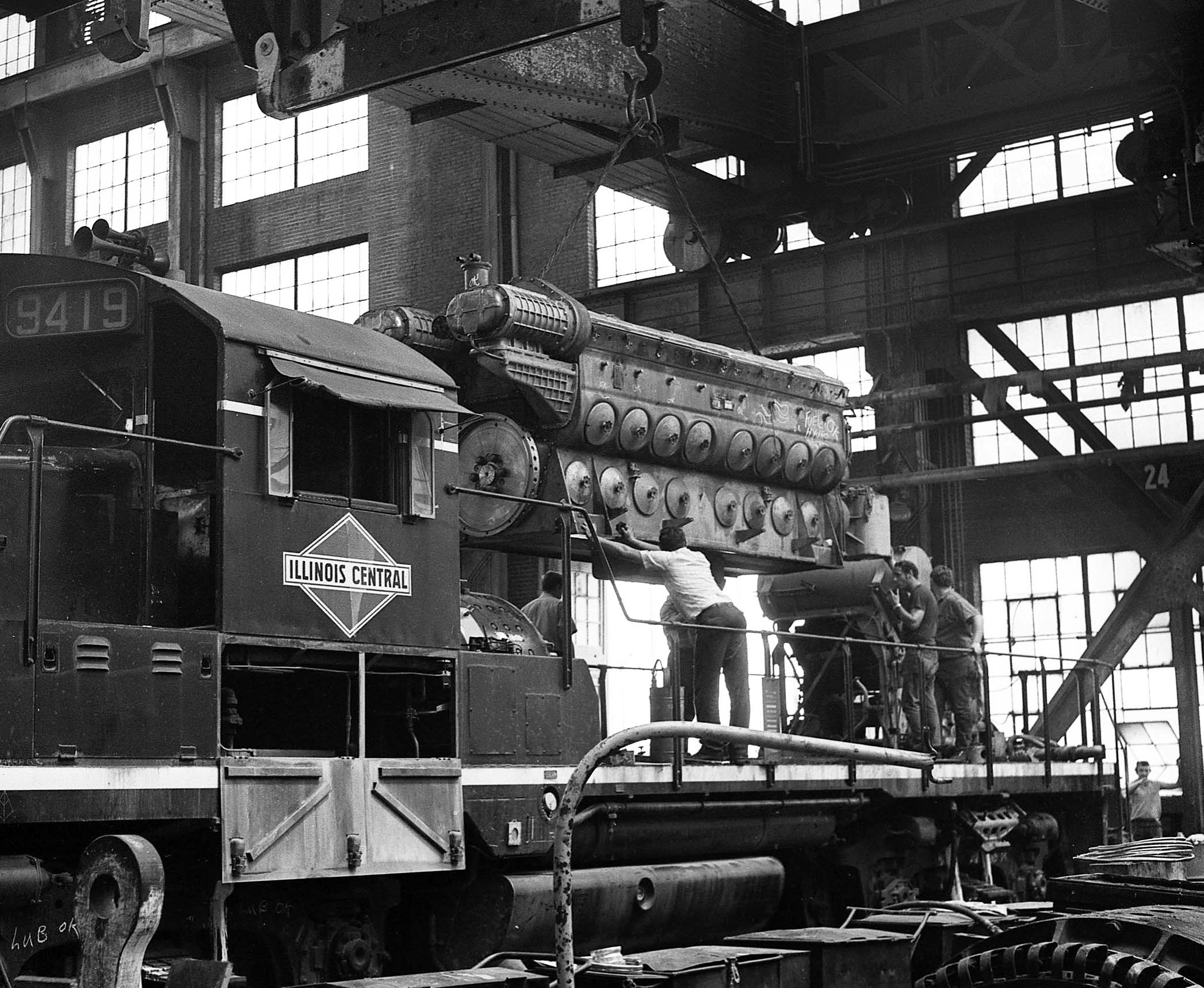 The fabulous 567: At Illinois Central’s famed Paducah (Kentucky) shops, IC GP18 9419 is in for heavy repairs, and its two-stroke, 16-cylinder 567D-series engine is being lifted by the shop’s overhead crane. Arguably, the EMD 567-series engine was the most successful, and notable, diesel powerplant in American railroading history. Photograph by Gary Dolzall. 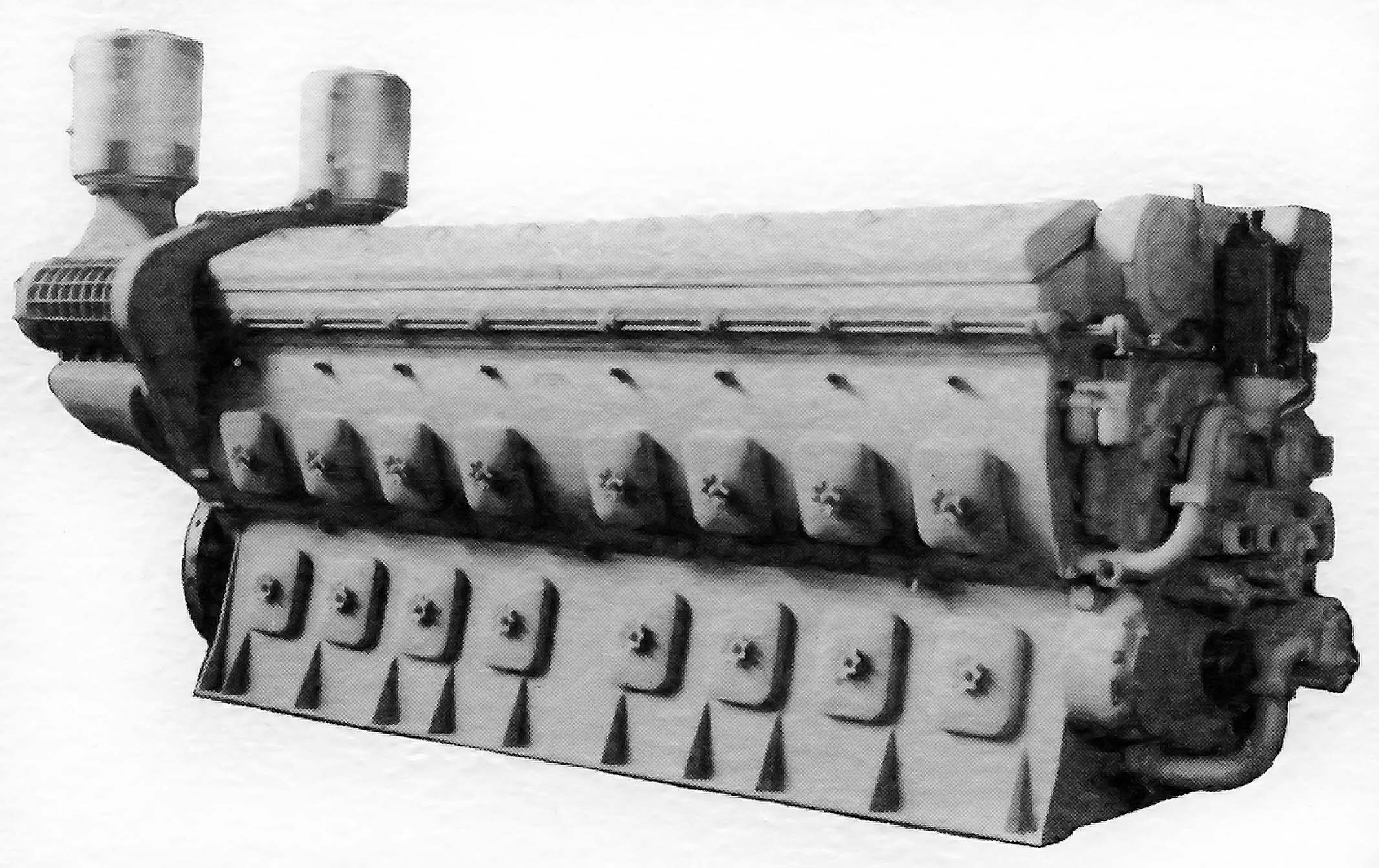 In the diesel’s original form, a 16-cylinder 567 engine stands ready, likely for use in a landmark EMD FT diesel. On the left end of the powerplant are air induction filters and Roots blowers. The number of crankcase covers per side reveals the engine is a V-16 powerplant. Photo: Dolzall collection. 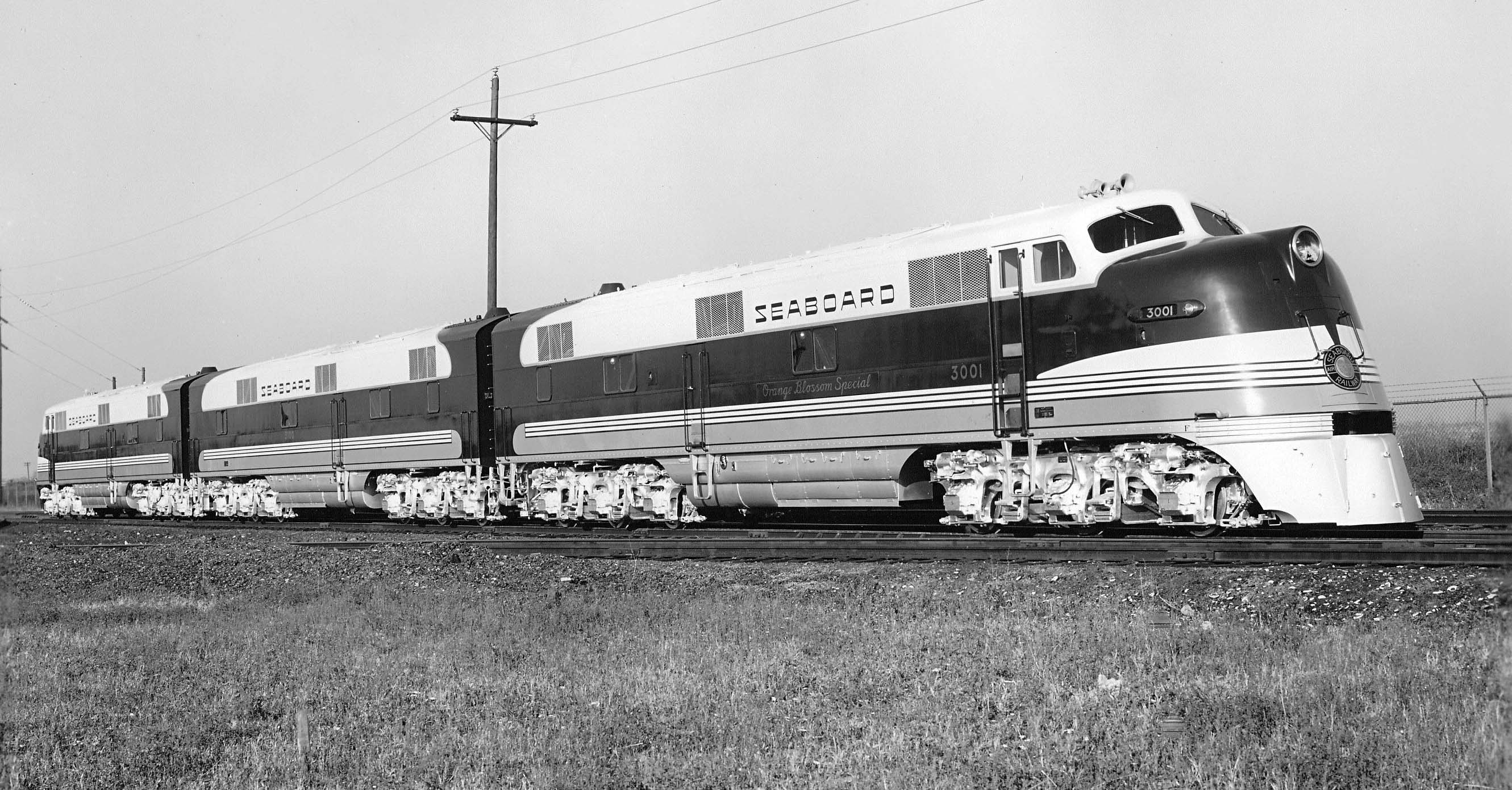 The 567-series powerplant made its production debut in Seaboard Air Line’s beautiful E4 diesels (above) in October 1938. Inside each E4, destined to power the renowned Orange Blossom Special, resided a pair of 12-cylinder 567 engines, providing 1,800 horsepower per unit. It was to capture the market for freight service diesel locomotives that, first and foremost, the 567-series engine was developed to power, and the engine was indeed the powerplant for “the diesel that did it,” Electro-Motive FT demonstrator 103 of 1939 (below). Photos: Dolzall collection. 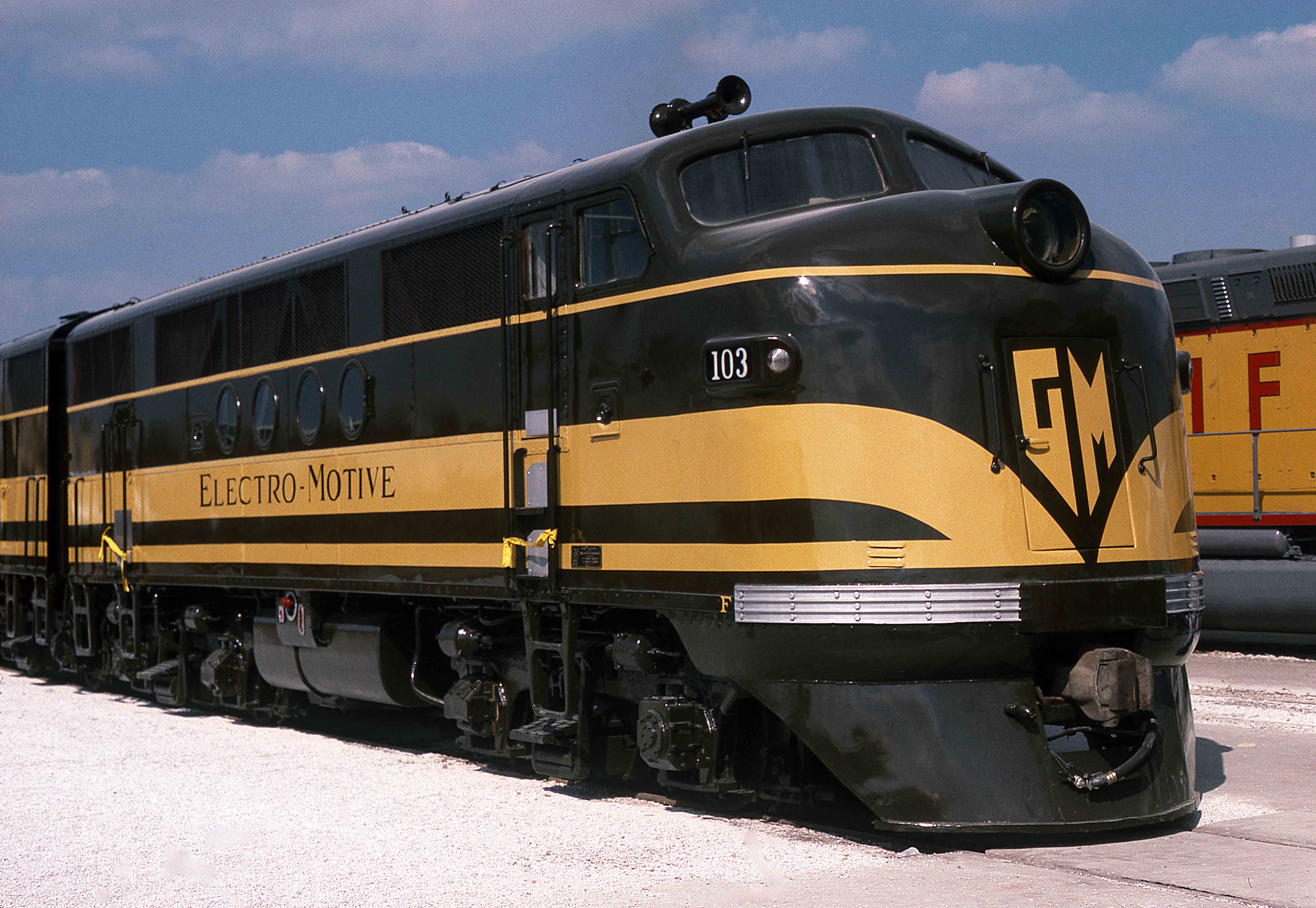 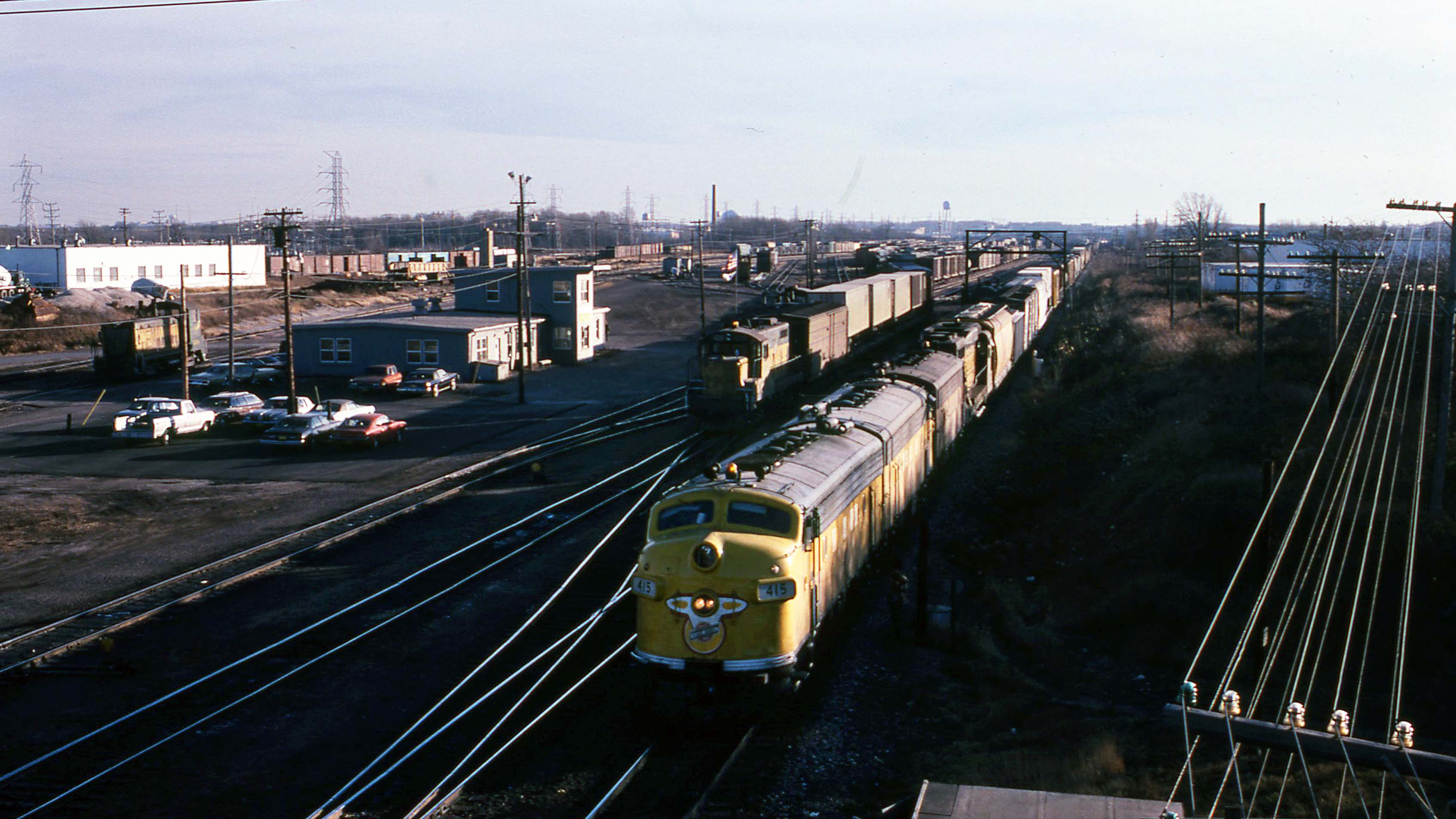 In a scene at Chicago & North Western’s Butler (Wisconsin) yard, three types of locomotive synonymous with the 567 engine – the EMD F-unit, Geep, and SW-series switcher – are all visible among the long shadows of a January 1981 evening. Photograph by Gary Dolzall. 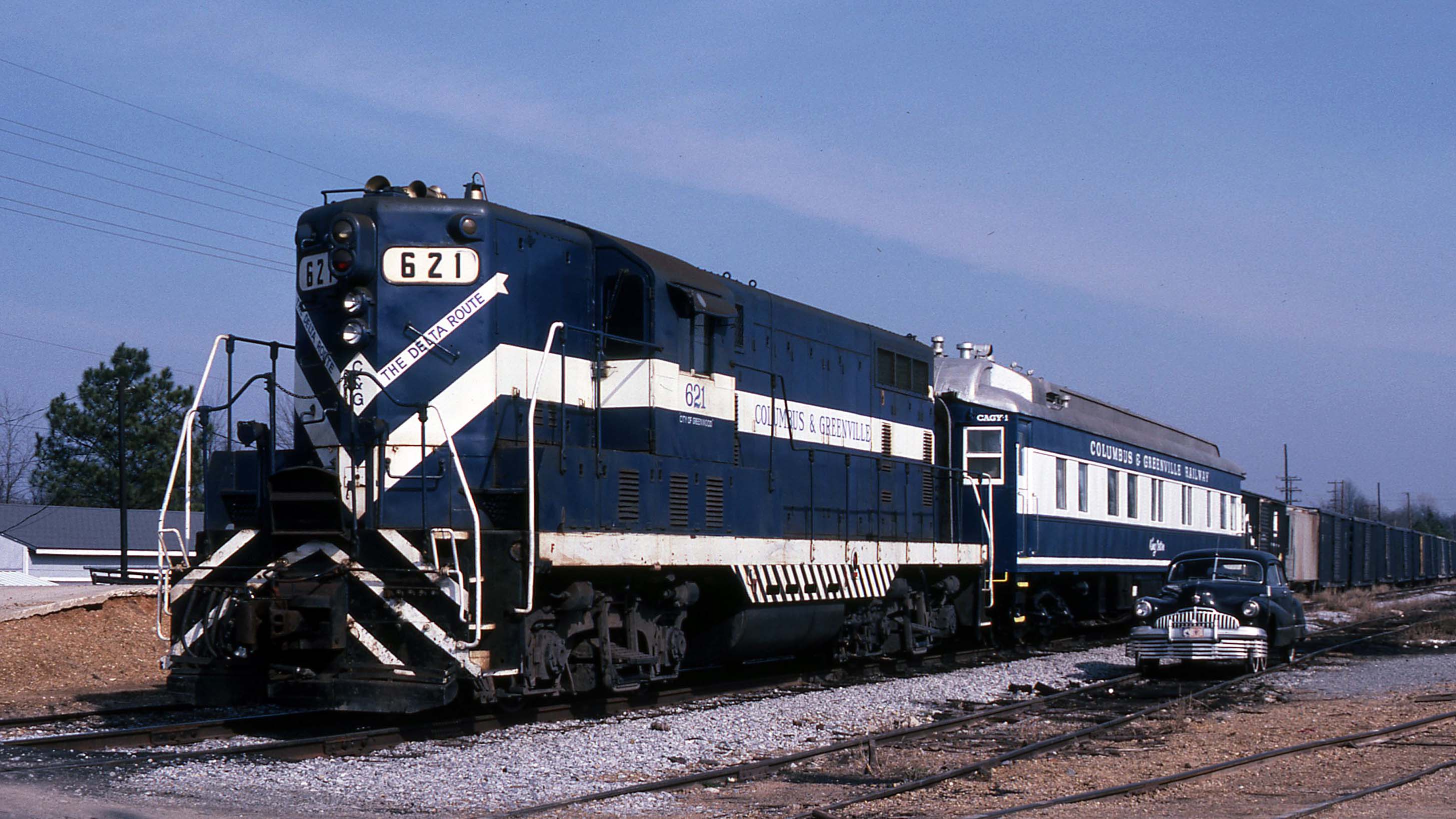 In a captivating image taken on Mississippi’s iconic Columbus & Greenville short line, two truly vintage products of General Motors stand side by side. C&G 621 is a 567-series powered GP7 constructed in 1952, while C&G rail vehicle No. 1 is a 1946 Buick four-door sedan. Photograph by Gary Dolzall. 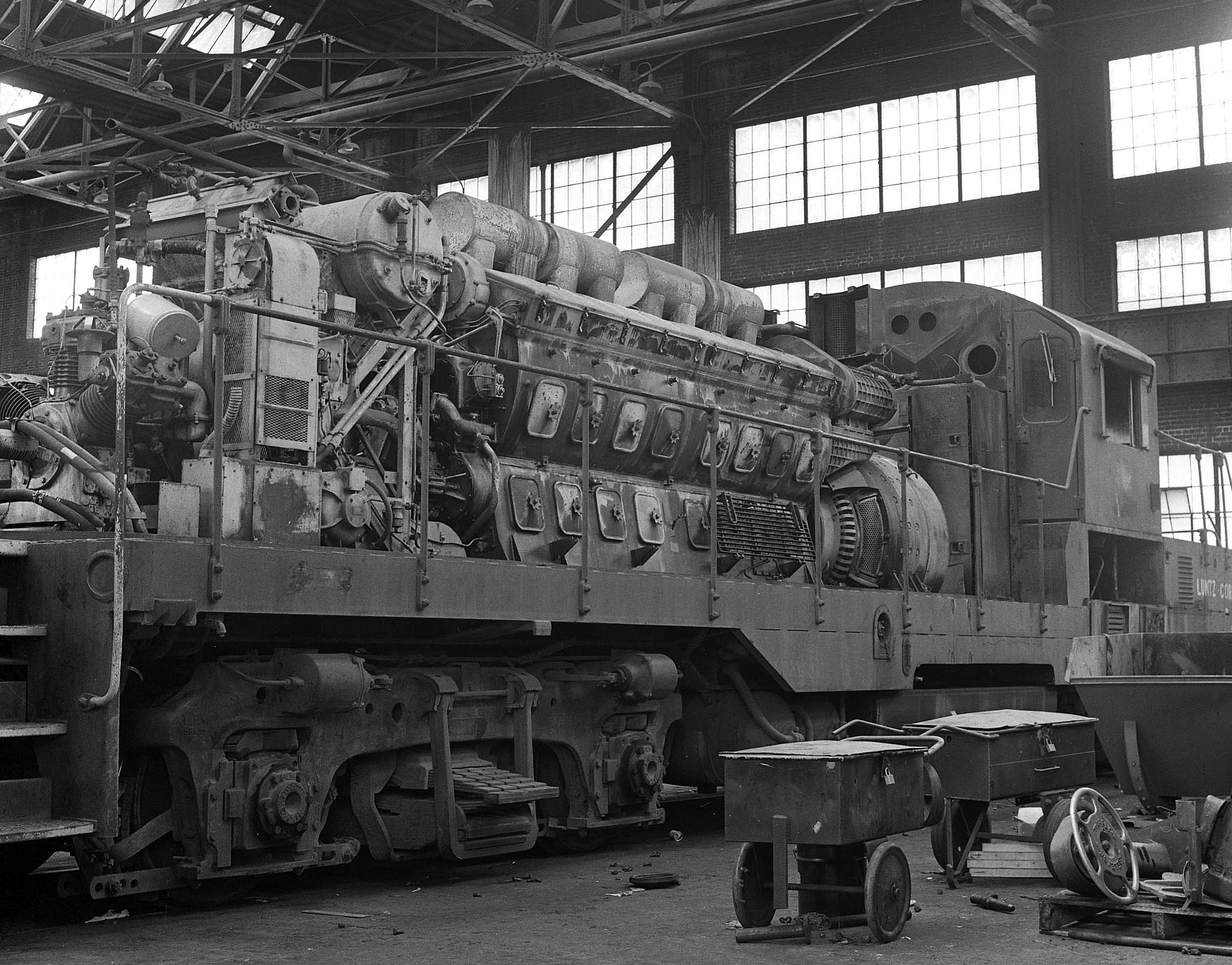 A GP7 undergoing rebuild at Illinois Central Gulf’s Paducah shops offers a fine view of the 567-series powerplant. At the far end of the engine (next to the locomotive cab) is the main generator, while on the near end of the engine is the cooling system and air compressor. Photograph by Gary Dolzall. 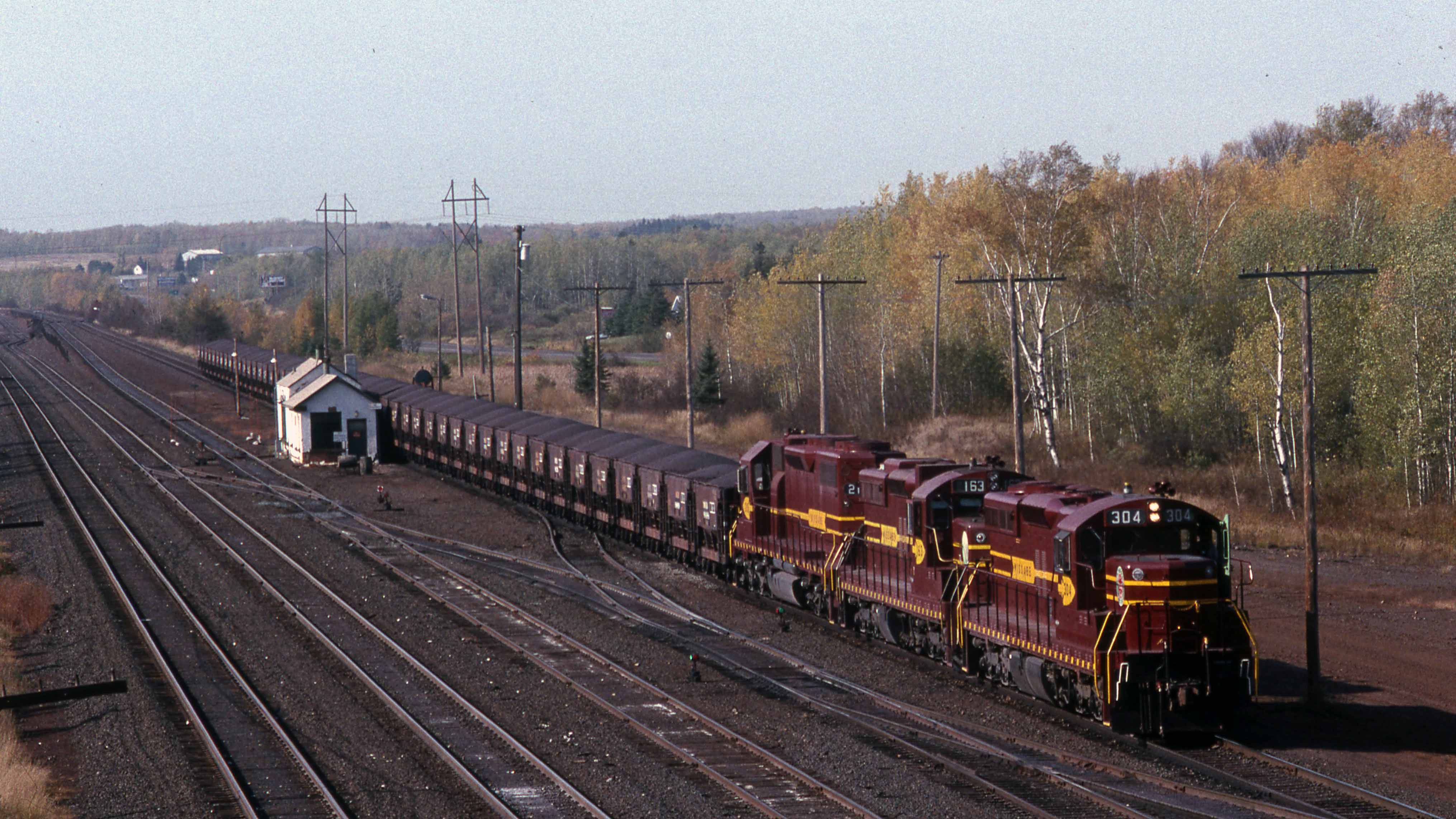 At Proctor, Minnesota, a pair of 567-powered Duluth, Missabe & Iron Range EMD SD18s team up with a 645-powered SD38-2 to lug heavy taconite ore. As their designation implies, the SD18s are powered by 1,800-horsepower 567D-series V-16 powerplants. Photograph by Gary Dolzall. 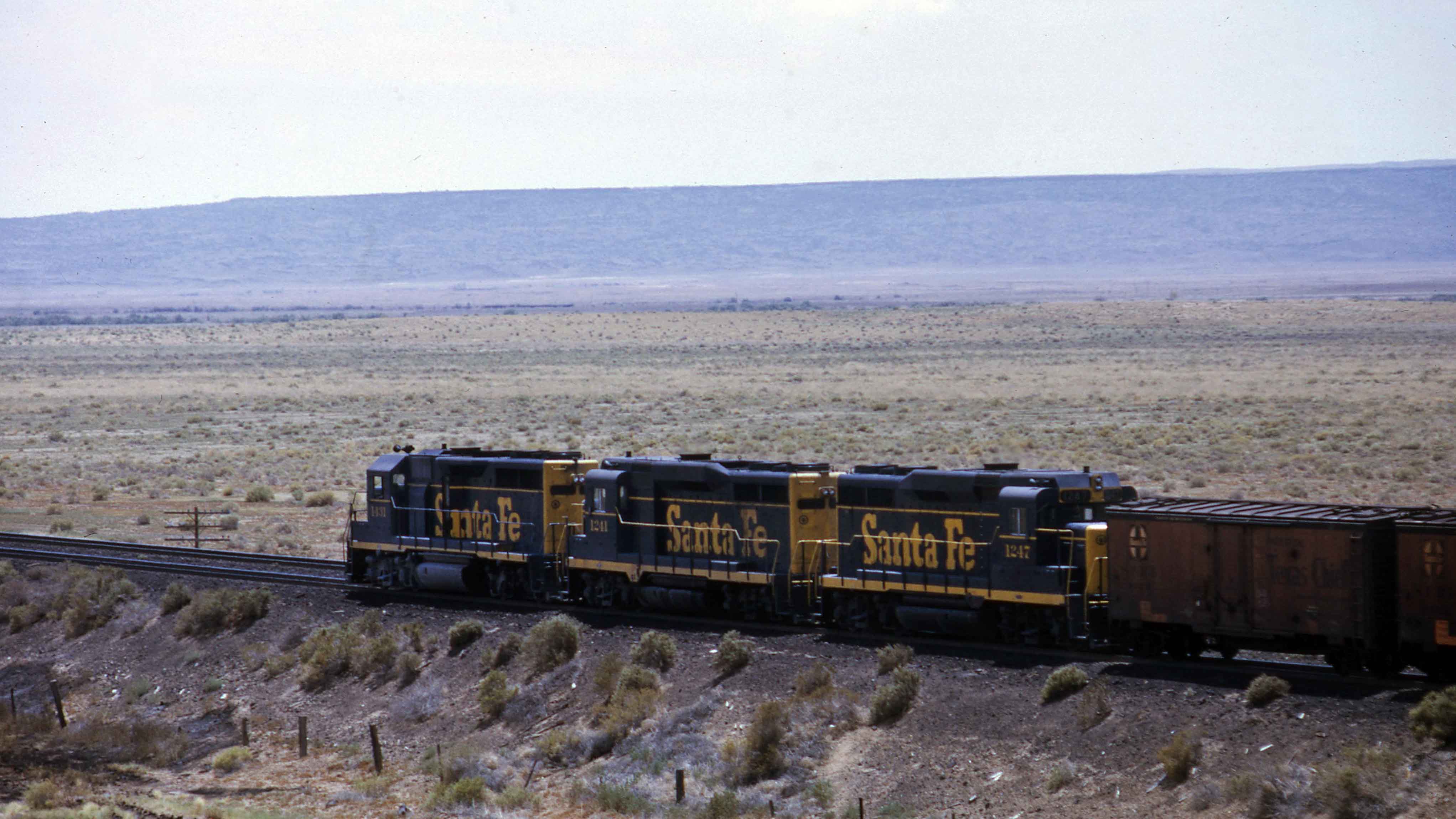 The 567-series engine reached its zenith with the turbocharged V-16 D3 variant which provided 2,500 horsepower and was utilized in the EMD GP35, SD35, and unique twin-engine DD35/DD35A. A Santa Fe GP35 leads a pair of GP30s hustling produce eastbound across Arizona in 1968 (above). Photograph by Gary Dolzall. When the 567 engine debuted in 1938, who might have envisioned that locomotives the likes of 5,000-horsepower Union Pacific DD35A 82 would follow only a quarter-century later! Photo: Dolzall collection. 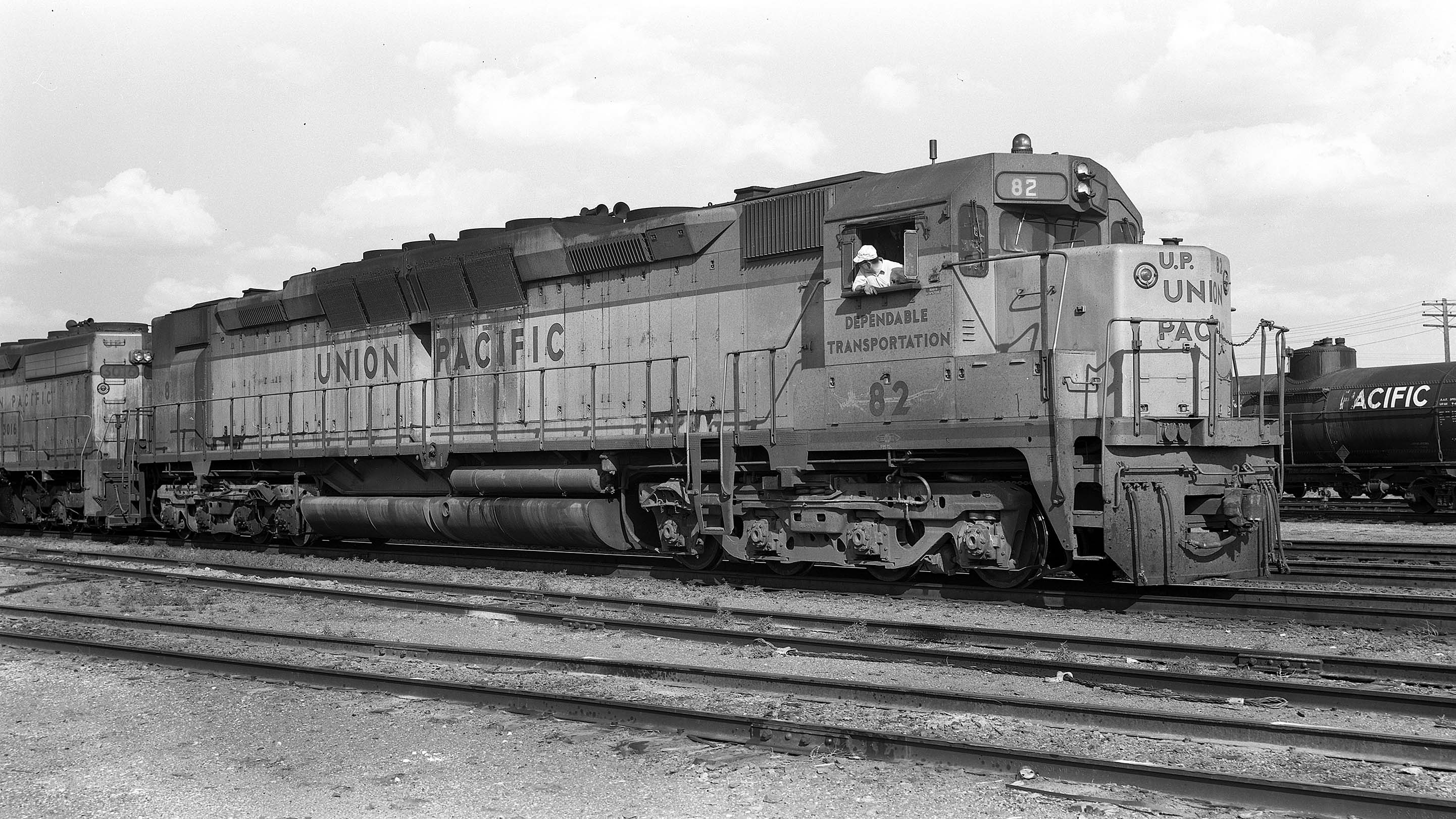