Reflecting on a long acquaintance with Amtrak, author Gary Dolzall finds much to appreciate.

Led by a celebrant no less than America’s “first railfan” – U.S. President Joseph R. Biden – this month Amtrak is celebrating its 50th Anniversary. And if plans in the development stage come to pass, the national railroad passenger carrier’s future has never seemed more secure and bright.

When Amtrak took over the majority of U.S. intercity passenger operations on May 1, 1971, I was in high school and already an avid railroad enthusiast, which means I’ve had largely a ringside seat for the first half-century of Amtrak’s remarkable journey. Happily, those decades have provided the opportunity for my family and me to experience the majority of Amtrak’s route map (including a number of lines that are, alas, no longer on that map). We’ve journeyed from Maine to Florida, from the Big Apple to the City of Angels. And, of course, there have been virtually countless opportunities to witness and photograph Amtrak action from trackside.

Numerous books and thousands of articles have been, and will yet be, written about every aspect of Amtrak – its creation, its struggles, its accomplishments, its equipment, its future. There is no need to recite all of that here. Rather, I’ll simply share, in a few words and photographs, some personal recollections and reflections.

Truth be told, the coming of Amtrak was not the biggest issue in my own railfan world during the spring and summer of 1971. As recalled in my earlier We Are Railfans article “The Making of a Railfan: One Man’s Journey,” I was then growing up in southern Indiana along the admired railroad of my youth – Monon, “the Hoosier Line.” Amtrak did not then serve my home town, but there was change afoot, as the 541-mile Monon later that summer would be merged into the 10,000-mile Louisville & Nashville. Thus, every available free moment of mine was devoted to capturing the final months of the Monon and the arrival of the L&N. My acquaintance with Amtrak would need to wait.

The wait finally ended in December 1971 when, on a family trip to nearby Kentucky, I stood trackside along the L&N mainline between its namesake cities to witness the snowy and urgent passage of Amtrak’s Floridian which, like many an Amtrak train of those formative months, still wore a rainbow of colors on equipment inherited from the private rail carriers Amtrak replaced. It was a captivating introduction, which brings to mind an observation: For the train-watcher, Amtrak has never been less than intriguing.

The early months and years of Amtrak were marked by its kaleidoscope of hand-me-down equipment, with classic Electro-Motive E-units doing most of the honors across the country. In those early years it seemed any experience might await: My first ride on Amtrak was also on the aforementioned Floridan, riding in a dome car that had once served the Northern Pacific’s great flagship, the North Coast Limited. Out East, the likes of ex-Pennsylvania’s legendary GG1s still rolled along the Northeast Corridor, but a traveler might also climb aboard one of the original, pioneering ex-Penn Central Metroliners – and from personal experience I can say that such a journey delivered a memorably fast and wild ride on Penn Central’s less-than-certain trackage.

It might have been expected that, once past its turbulent birth, Amtrak would become standardized, cookie-cutter if you will. After Amtrak’s star-crossed attempt to first standardize on the EMD SDP40F of 1973, it is true that the omnipresent (and remarkably successful) EMD F40PH took the reins across much of the country (to be followed by today’s GE Genesis workhorse). But there were always, too, the unexpected and the utterly intriguing exceptions: The RTG “French Turbos” that arrived in 1973 and hustled around the Midwest, then their American cousins, the Rohr RTLs, that would serve for decades in the East; Amtrak’s burly General Electric P30CH “Pooch” diesels, which roamed the country a bit like vagabonds until finding a long-time home hauling the ever-so-long and interesting consists of Amtrak’s Auto-Train between Virginia and Florida; the hand-me-down ex-New Haven FL9s, which gained Amtrak colors and served along the Hudson River; and later the likes of the flashy blue-and-silver F59PHIs and high-level cars of the Pacific Surfliners, and the green-and-white diesels and low-slung Talgo consists of Amtrak’s Cascade services in the Pacific Northwest.

Meanwhile, Amtrak did indeed bring rationalization, conformity, and appeal to the fleets of carriages it used to haul people. We all quickly became familiar with the workman-like Amfleet equipment based on the original Metroliner body design; the magnificent Superliners that took the concept of Santa Fe’s elegant El Capitan hi-level equipment and improved upon it; and the cozy new Viewliners that at long last allowed Amtrak’s Heritage equipment to take well-deserved retirements.

No discussion of Amtrak is complete without mention of the all-important Northeast Corridor over which Amtrak carries upwards of 12 million passengers a year. As the GG1s rapidly aged, Amtrak stubbed its toe with the “too big, too heavy” GE E60 electric, then hit a home run with the ASEA/EMD AEM-7. Surely, the diminutive “toaster” may have looked odd at first, but its years of service before turning over the reins to today’s ACS-64s and Acela turned the little electric into an endearing classic. Between 1995 and 2000, Amtrak strung new catenary over the 332 miles from New Haven to Boston and then introduced the unrivaled and not-to-be-missed high-speed Acela – all of which made the trackside experience for the train-watcher a good one. With the likes of electric Avelia Liberty and the diesel Siemens Charger on the near horizon, the future looks no less captivating, whether your home address is Philadelphia, Chicago, or San Diego.

Amtrak’s purpose, of course, is not to simply entertain us from trackside, but to get us –and millions of other travelers – from point A to point B. And for that task I give Amtrak high marks. Despite its life-long funding challenges, Amtrak has delivered many a memorable and enjoyable journey (and yes, as with any form of transportation, a few less than memorable ones). A family trip on the then-new Superliners of the Empire Builder is a cherished memory, as are our “Disney-bound” journeys to Florida, first on heritage sleepers then spiffy Viewliners. Amtrak has carried me around Horseshoe Curve, across the endless deserts of the great American West, and below the towering peaks of West Virginia’s Appalachians and Colorado’s Rockies, and given me the experience of 150 mph running through coastal Rhode Island. For several decades, business took me regularly from New York City to Washington, D.C., or Boston, and Amfleet-equipped Northeast Regional trains and then the unmatched Acela gave me reason, as a “regular,” to look forward to the travel as well as the destination.

Thanks, Amtrak, for the journeys, and I look forward to many more. – Gary Dolzall 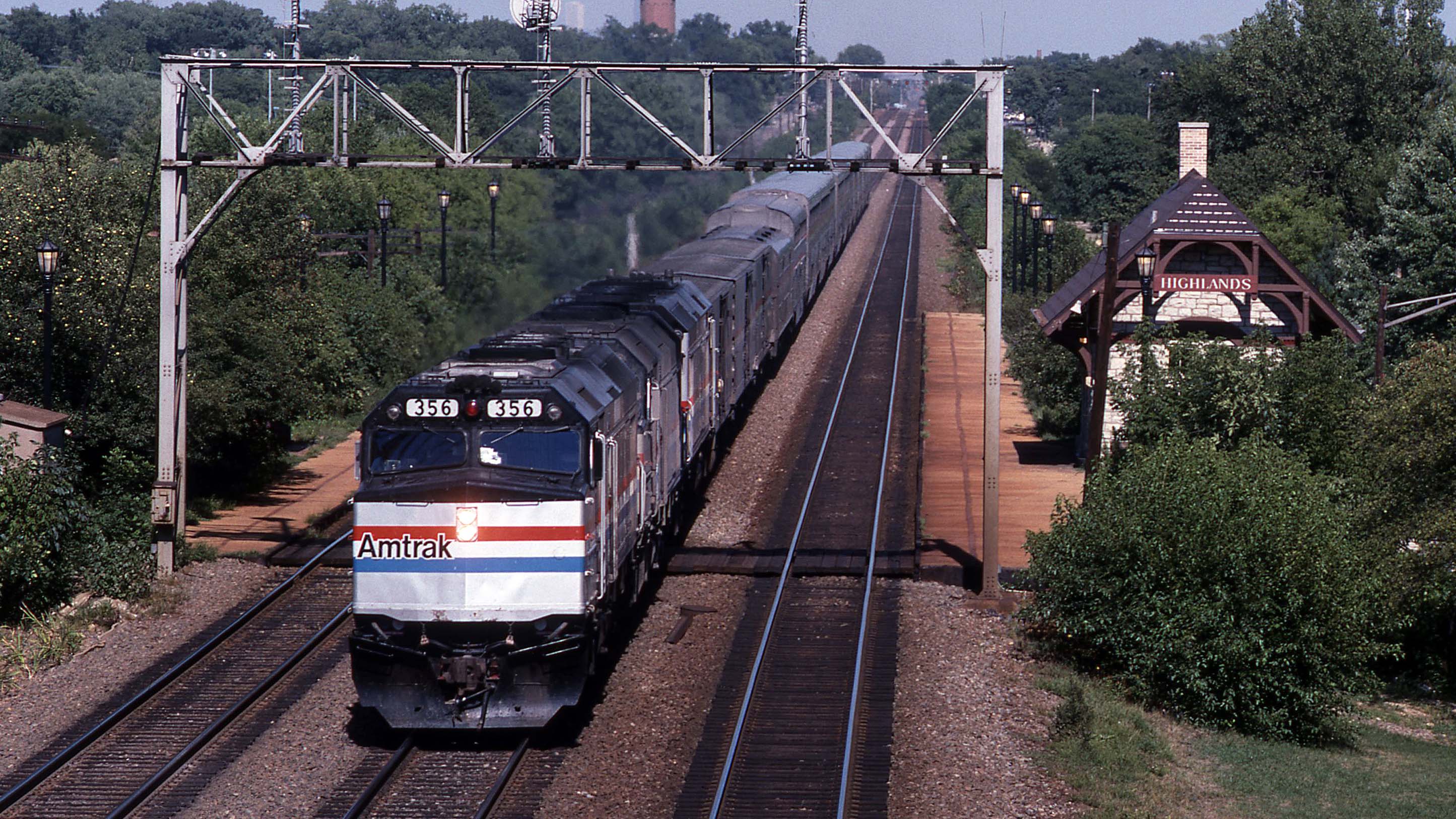 In an August 1988 scene symbolic of Amtrak’s coming of age, a trio of EMD F40PHs power the Superliner-equipped California Zephyr westbound through Highlands, Illinois, on the Burlington Northern’s famed “Racetrack” out of Chicago. 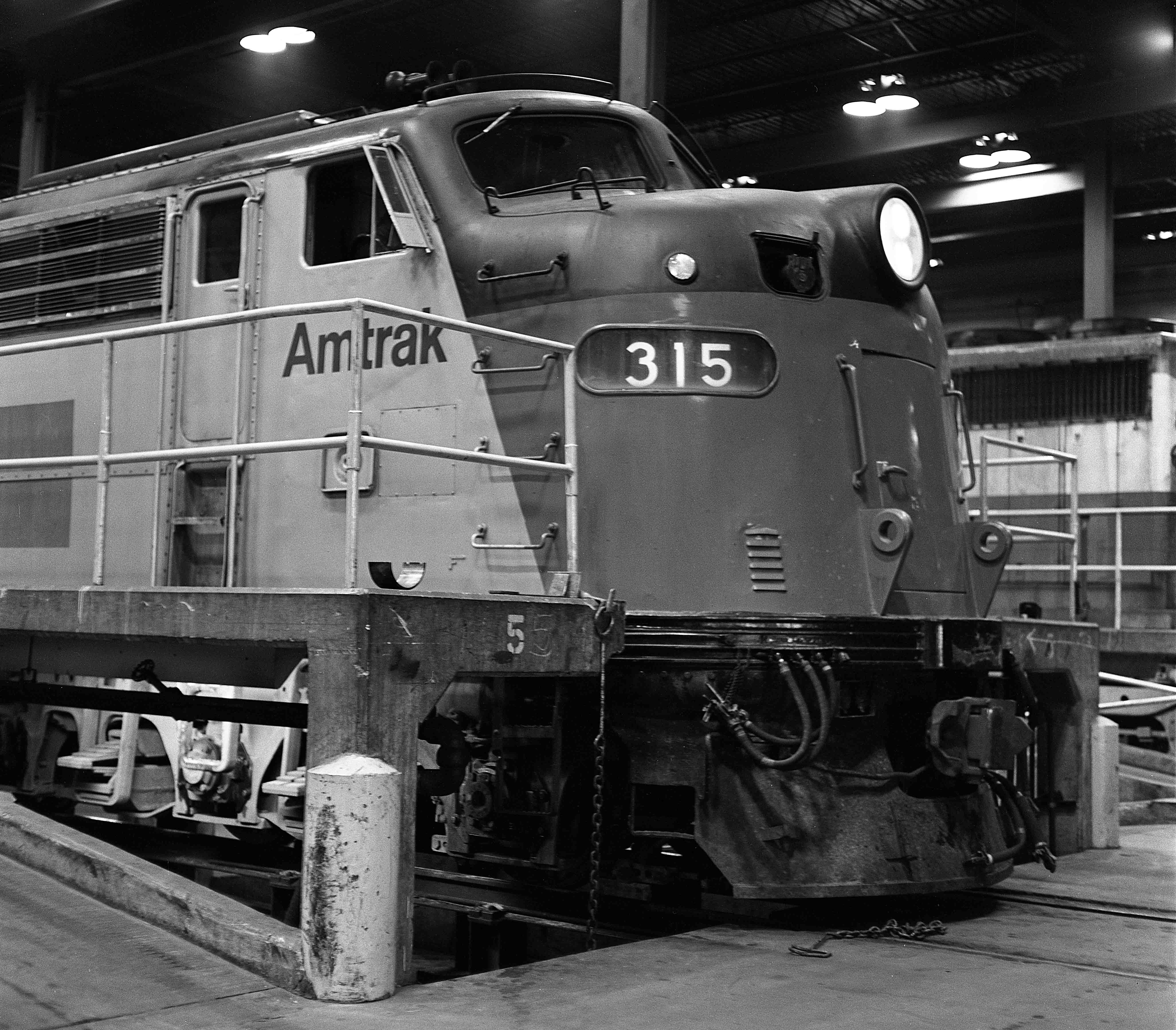 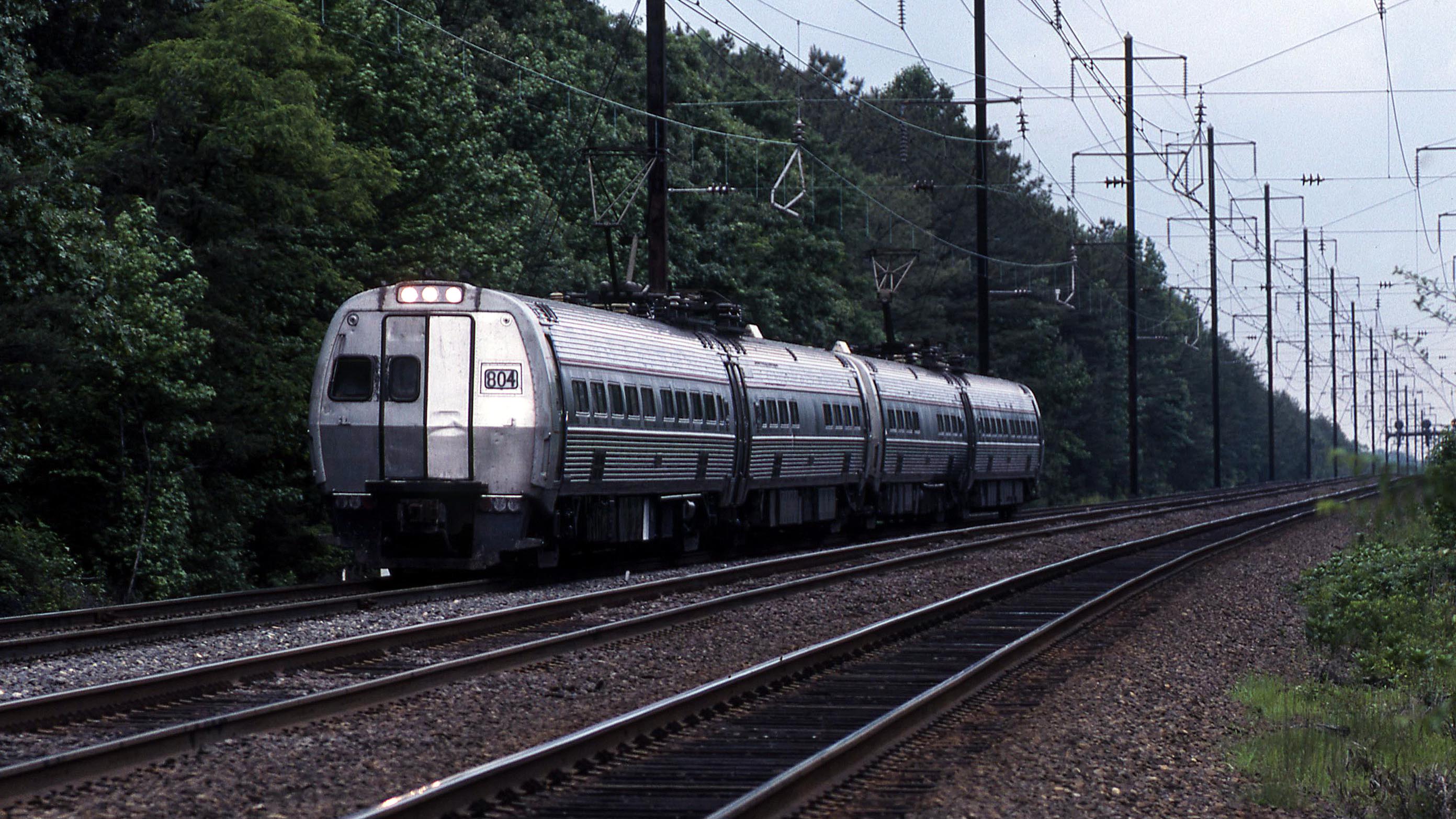 High-speed pioneers: Built by Budd and first operated by Penn Central, the Metroliners were among America’s high-speed pioneers. Amtrak inherited the EMUs in 1971 and operated the train sets on the Northeast Corridor for more than a decade. Near Bowie, Maryland, in 1979, Amtrak 804 is cruising at 100 mph+. Many of the Metroliner cars, including the 804, survive today as push-pull service cab control cars. 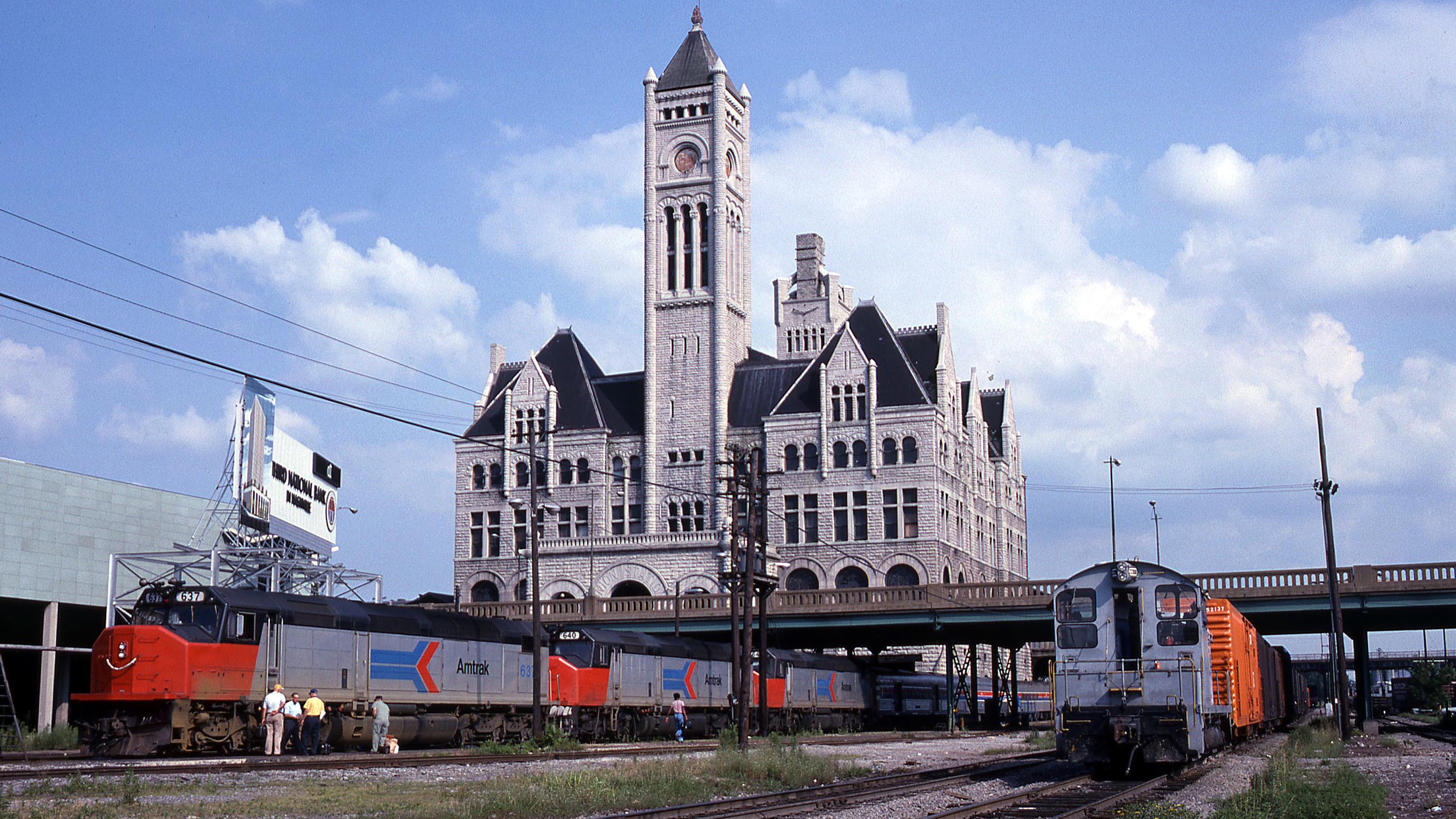 With a set of Amtrak’s star-crossed EMD SDP40Fs on the point, the Floridian (which operated between Chicago and Florida) receives service and a crew change at Nashville, Tennessee, in 1976. To the right, a Louisville & Nashville EMD switcher tends tonnage. It was the Floridian that provided the author his first ride aboard Amtrak. 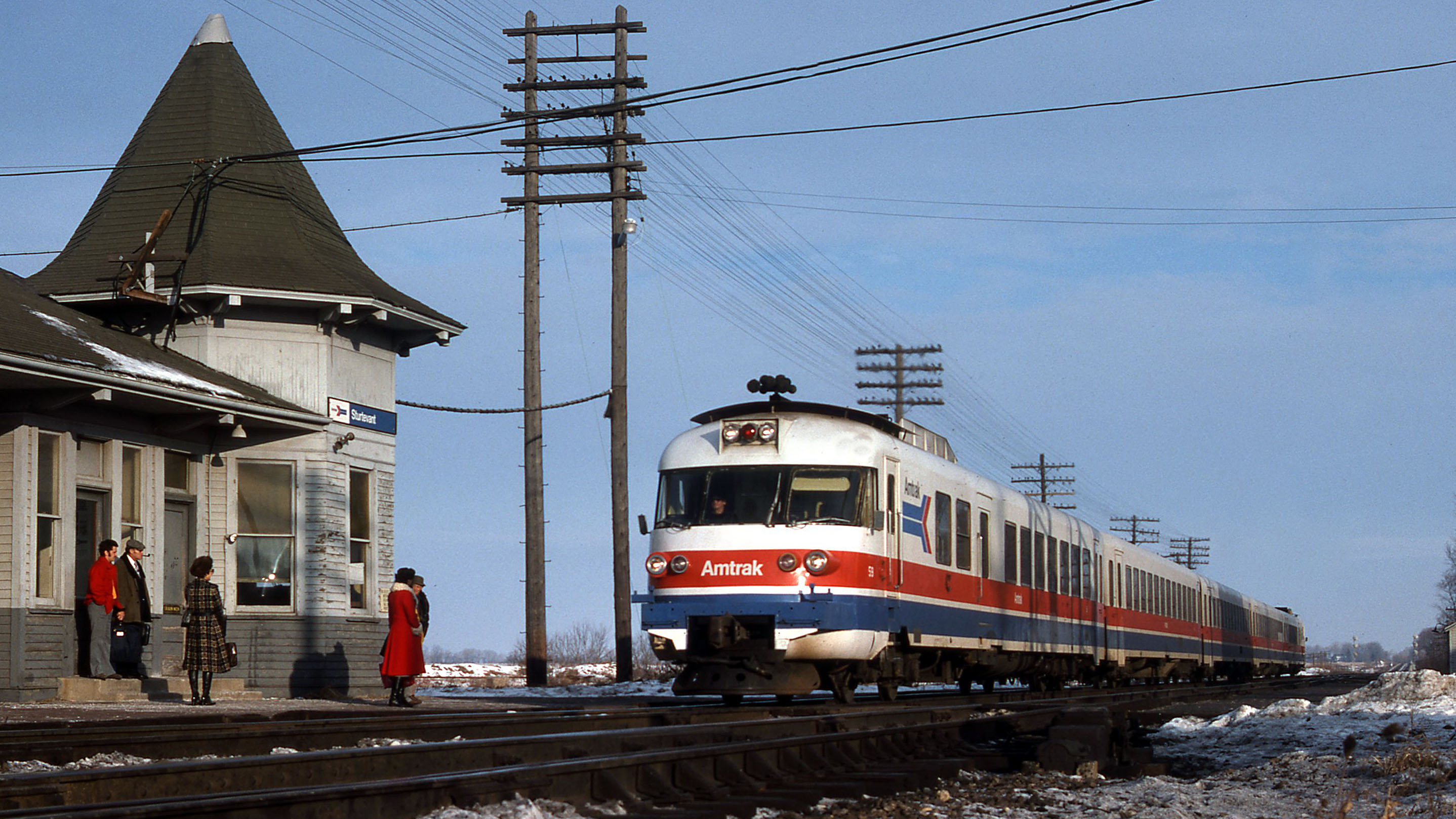 The old Milwaukee Road turret-shaped depot at Sturtevant, Wisconsin, and Amtrak French-built RTG Turboliner 59 make for an uncommon scene as passengers bundled against the Wisconsin winter cold wait to board the Milwaukee-Chicago service. Introduced in 1973, the Turboliners served numerous short-haul routes out of Chicago. 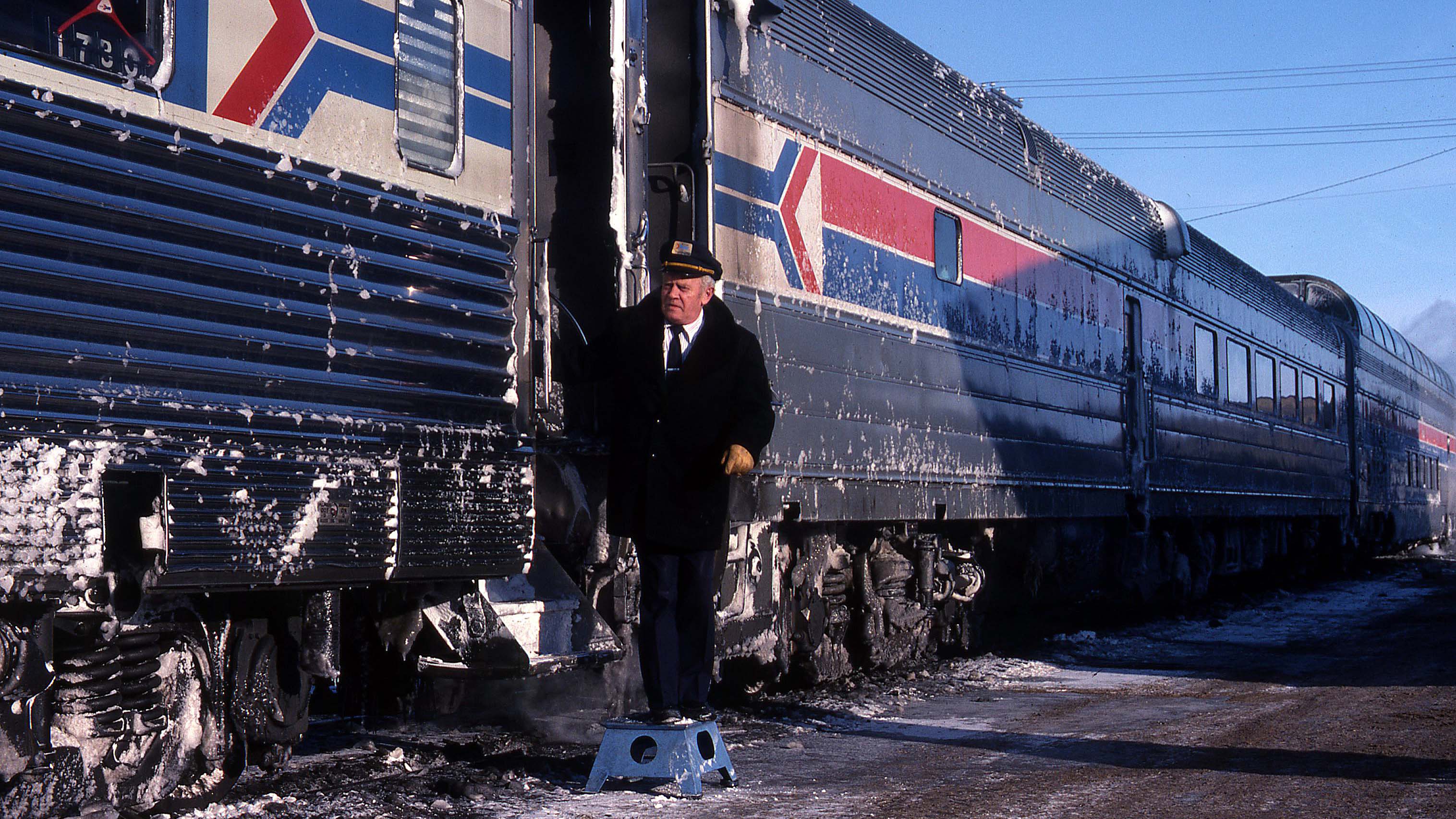 From its formation in May 1971 through its 50th Anniversary, it is, of course, the men and women of Amtrak who made it all happen. On a bitterly frigid New Year’s Day of 1978 at Fargo, North Dakota, the conductor of the Empire Builder scans the platform and readies for departure. 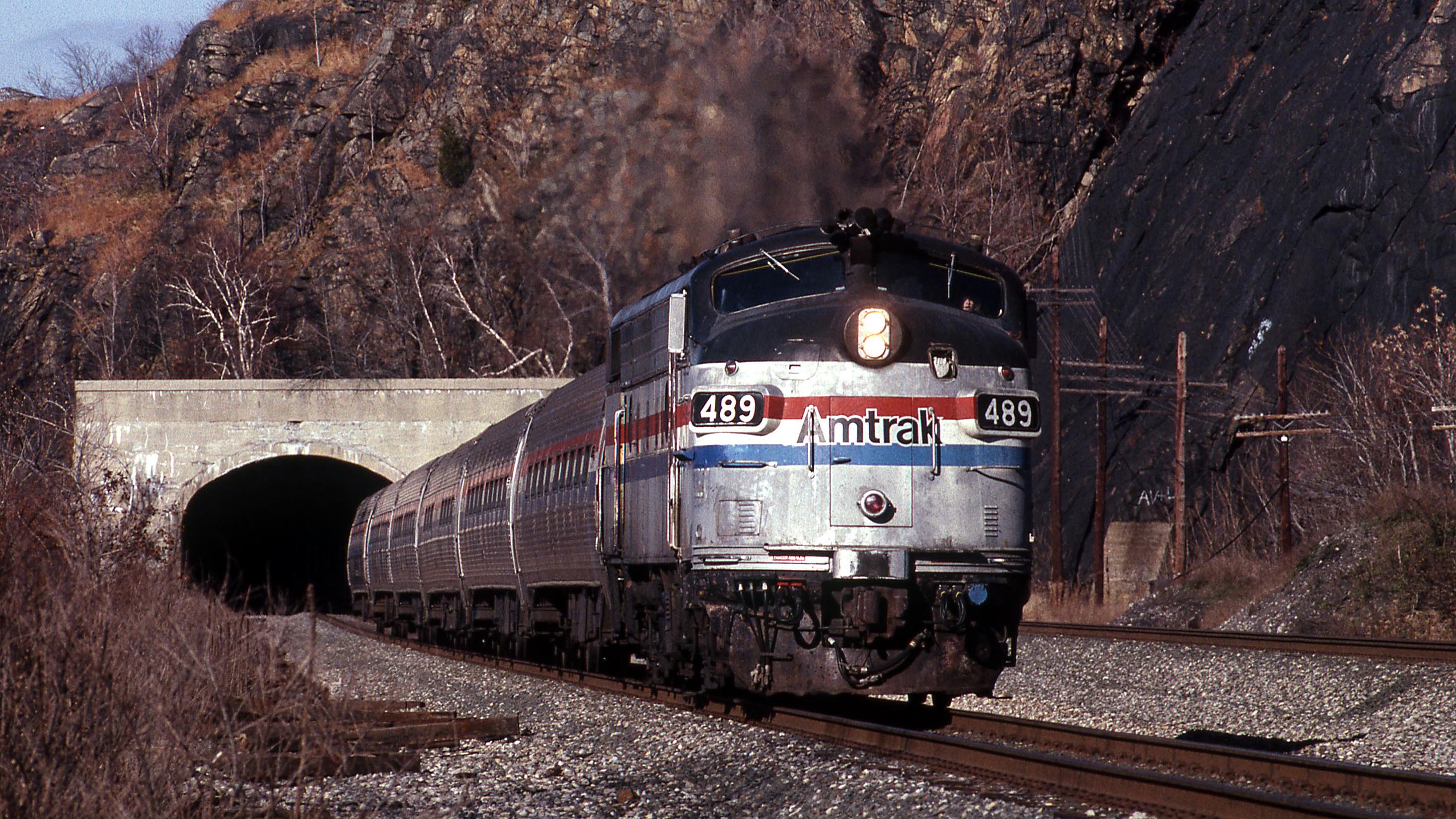 For the train-watcher, Amtrak has never been less than intriguing. Along the scenic Hudson River, Amtrak EMD FL9 489, which began life in the service and colors of the New Haven, hustles an Empire Service train bound for New York City (above). Amtrak’s big, burly General Electric P30CH diesels earned the nickname “Pooch” and were something of vagabonds until becoming regulars on Amtrak’s Auto-Train. At the Lorton, Virginia, Auto-Train terminal in 1990, the crew is climbing aboard P30CH 722 (below). 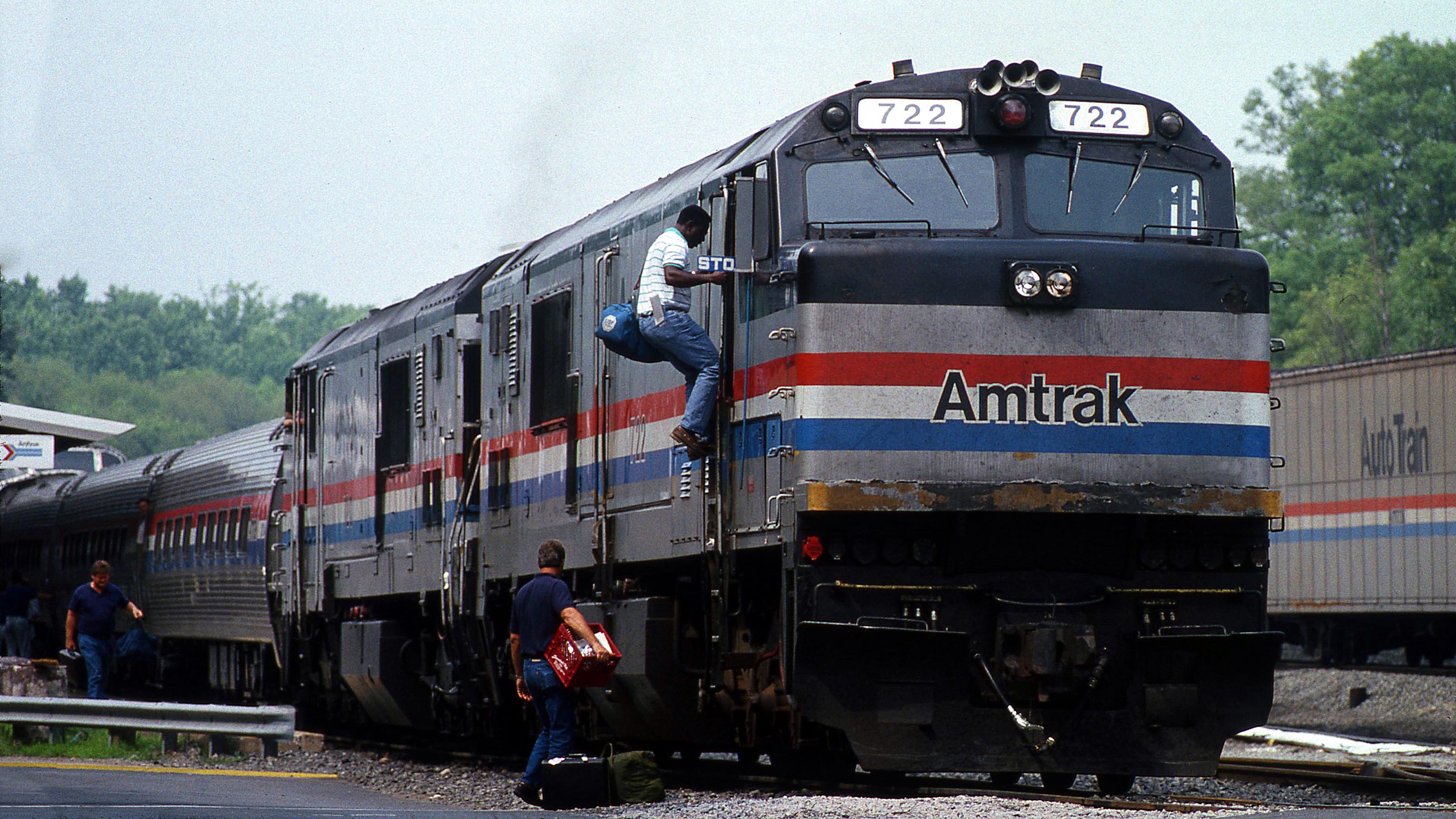 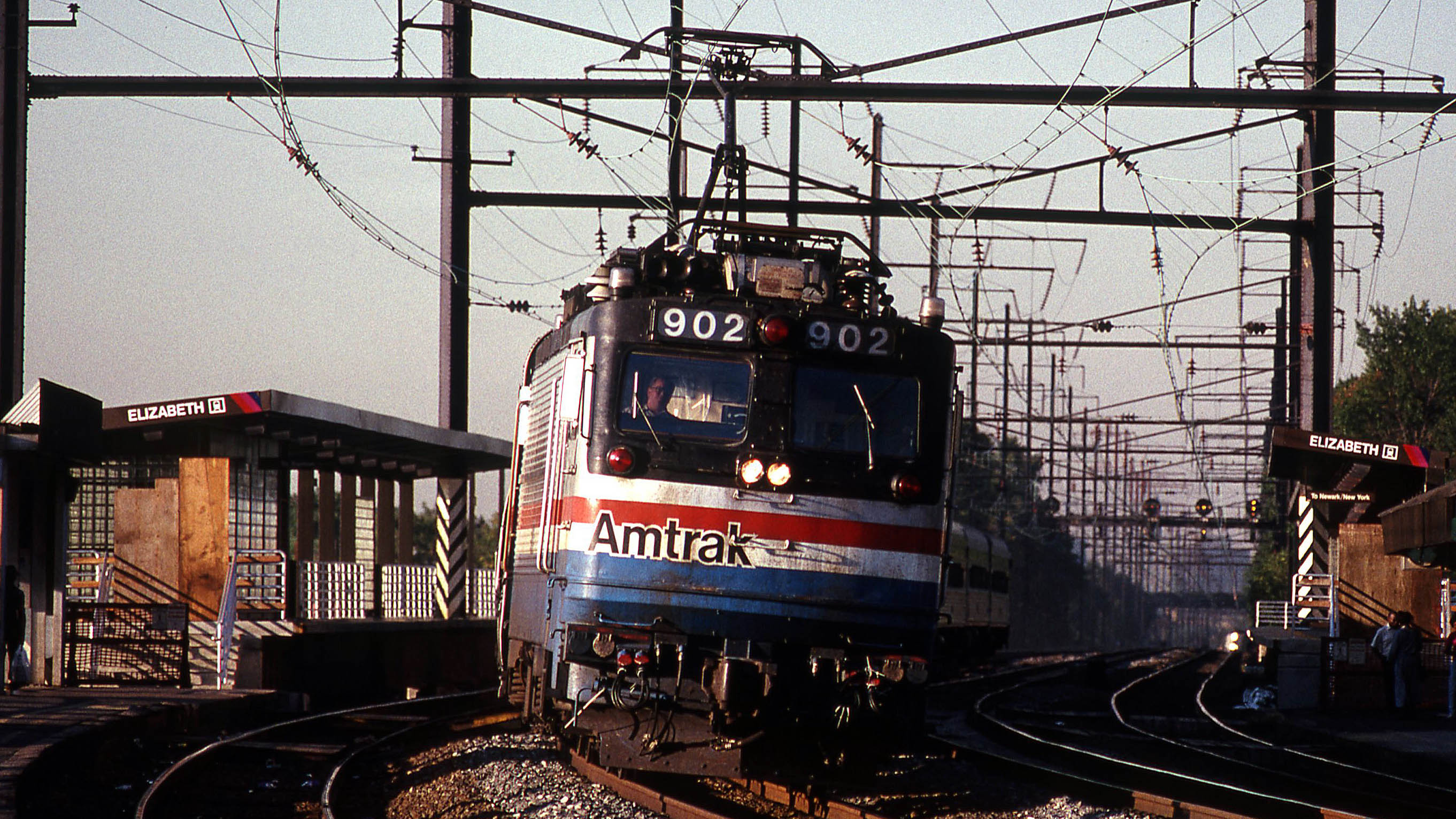 Amtrak hit a home run with its ASEA/EMD AEM-7, While the diminutive “toaster” may have looked odd at first, its years of service before turning over the reins to today’s ACS-64s and Acela turned the little electric into an endearing classic. In the dusk light of an August 1988 evening, AEM-7 is hustling an Amtrak “Clocker” through Elizabeth, New Jersey, on the Northeast Corridor. 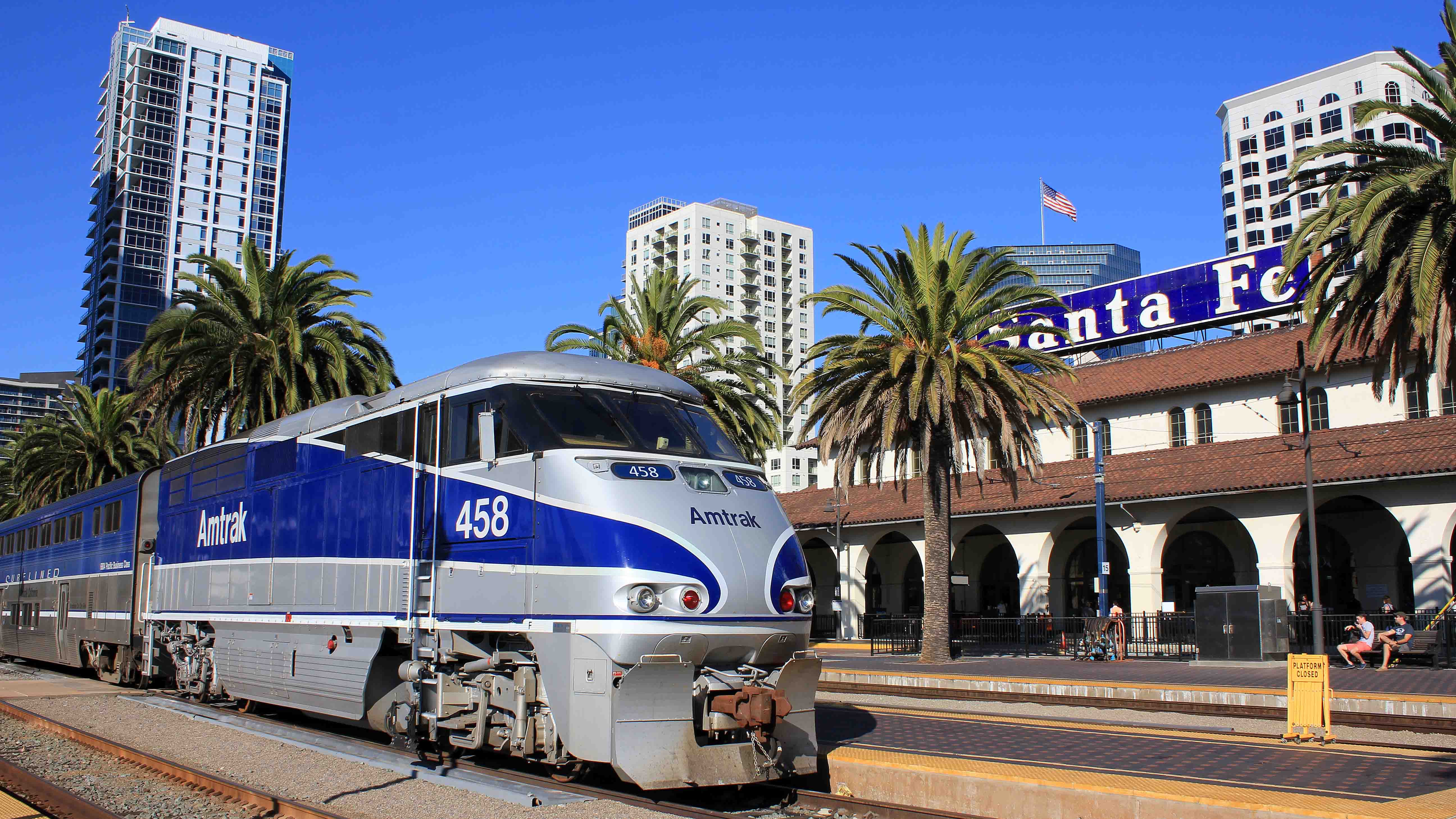 The ultra-modern face of Amtrak Surfliner F59PHI 458 stands in contrast to the timeless lines of Amtrak’s Santa Fe station in San Diego (above), while some 3,000 miles farther east amid brilliant October 2020 fall foliage, Amtrak Genesis P42DC 112 powers a Hartford Line train destined for Springfield, Massachusetts (below). 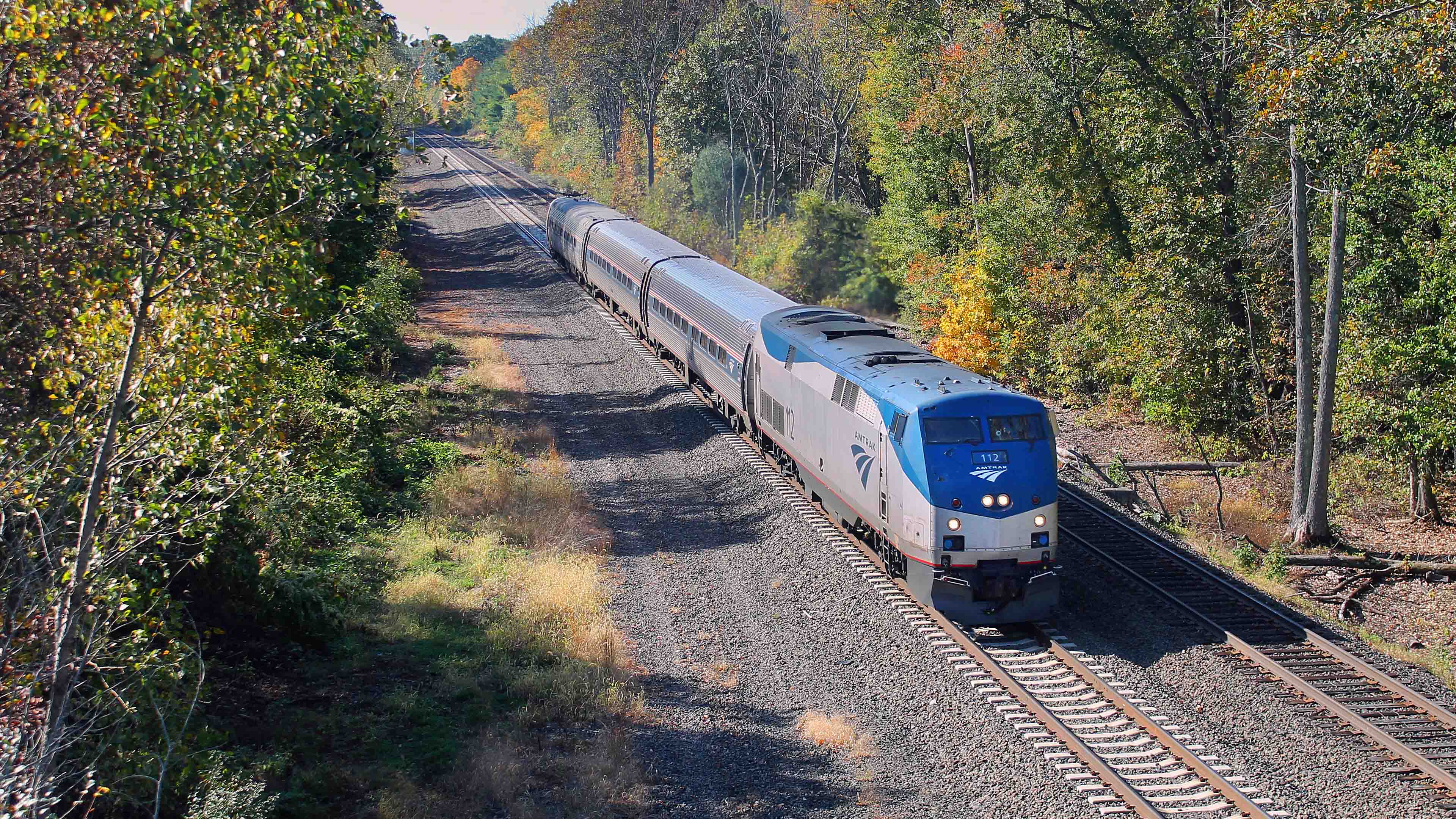 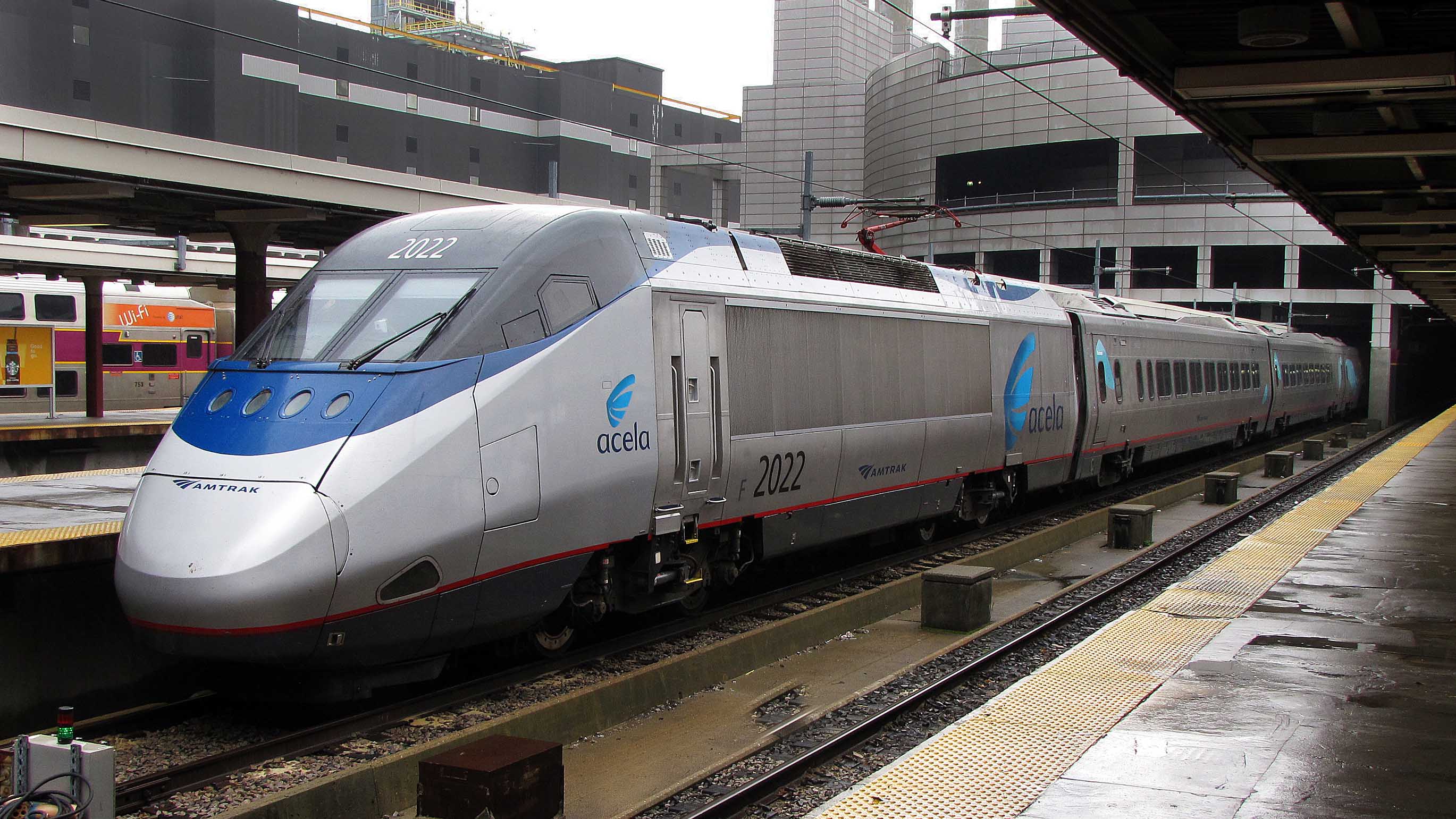 Amtrak’s unrivaled star, the high-speed Acela, shares the rain-soaked platforms of Boston South Station with MBTA commuter equipment. In short order, the author would climb aboard the Acela for a fast and welcome ride home after a day of business.