A War Hero in Steel & Steam

It was American war correspondent Ernie Pyle who coined the nickname the “GI’s General” for U.S. Army General Omar Bradley, the man who would in 1944 command the U.S. First Army during the Normandy Invasion. But it was the enlisted men themselves that lent their own nickname – “GI’s” – to the steam locomotive that served as the everyday railway foot soldiers in the war – the United States Army Transportation Corps’ S160-class “GI Consolidations.”

The GI Consolidation nickname given to World War II’s S160 carries a touch of irony in that the locomotive was, in fact, design-based on a locomotive built two-and-a-half decades earlier for service in World War I. Then, the locomotive bore a rather more elite name – the “Pershing Engine” – named for John J. “Black Jack” Pershing, commander of the U.S. Army’s WWI American Expeditionary Forces.

When “the War to End All Wars” erupted, the Baldwin Locomotive Works and its massive Eddystone (Pennsylvania) facilities immediately became a key supplier of locomotives, armaments, and munitions for the war effort. Baldwin constructed locomotives of various sizes and gauges intended for service in Great Britain, France, and Russia (the latter including the famed “Russian Decapods,” many of which ended up serving U. S. railroads). Among 465 standard-gauge locomotives built by Baldwin during World War I for Britain were 150 2-8-0s constructed at Eddystone in 1917. With America’s entry into the war that same year, Baldwin was enlisted by the U.S. Government to construct 150 2-8-0s, similar in design to the earlier British Consolidations. That original order for 150 “Pershing Engines,” would, over the course of the war, expand ten-fold, to total more than 1,500 locomotives – and, in a demonstration of the sheer magnitude of Eddystone’s enormous manufacturing capacity, Baldwin for a time shipped an average of 10 new Pershing locomotives each day.

Amid the re-emerging war clouds of the 1930s, the United States Army undertook an update of the Pershing Engine design, first resulting in the S159 2-8-0 of which eight were constructed in 1942 by Lima Locomotive Works. The S160, borrowing design elements both from its World War predecessor and from the Army’s 200,000-pound 2-8-2s constructed in 1942 for use by the British Army, soon followed. As compared to its Pershing sire, the S160 featured a higher-mounted boiler, allowing a larger firebox with a grate area increased from 32.7 to 41 square feet. Operating with 225 pounds of steam pressure (compared to 190 for the Pershing), the S160s could exert similar tractive effort (31,490 pounds) while using 19-inch (rather than 21-inch) cylinders. The S160’s engine weight was 161,000 pounds and it was designed to fit in the hold of transport ships, burn either coal or oil, and operate at elevations of up to 6,800 feet.

Constructed to shared blueprints by America’s “big three” steam builders – Baldwin, American Locomotive Company (Alco), and Lima – more than 2,100 “GI Consolidations” would roll out of the builders’ erecting bays in 1942-1946, serve in Great Britain by the hundreds, accompany the Allied forces into occupied France, and eventually serve in more than 20 countries and across four continents around the globe. The U.S.-built “GI Consolidations”, along with North British Locomotive Company’s famed “Austerity” 2-8-0s, were, indeed, true wartime heroes.

On arrival in Britain, the S160s were largely sent out from the GWR works at Ebbw Junction in Wales with a few heading further north to Doncaster and the LNER. All of the "Big Four" railway companies received an alloaction of the locomotives and though some were operated with a view to 'running in', in fact they served to fill gaps in the roster left by damaged domestic locomotives and an increase in demand for services shipping troops and supplies ready for the invasion on Normandy. GWR and LNER took on the largest quota of S160s at over 150 units each, with the LMS taking 50 and Southern Railway only 6. Locomotive crews had to adapt to features of the S160 that were not familiar in the UK, such as the water gauge and brakes that performed poorly compared to similarly-sized UK engines.

Following the end of WWII, copies of the S160 were built by Baldwin, Lima, and Alco for the United Nations Relief and Rehabilitation Agency (UNRRA). At least 160 engines were constructed with examples going to China and Belgium. In Britain, the original batch of locomotives that had served in preparation for the Normandy invasion joined those still arriving from the USA in being distributed widely across Europe. Over 500 S160s were delivered to Hungary, though not all of these entered service, with other sizeable quantities going to Italy, France, Yugoslavia and the Soviet Union. Only one S160 is thought to have remained in service in the UK, at the Longmoor Military Railway in Hampshire 'Major General Carl R Gray Jnr', but was later scrapped in 1957 just ten years before the line itself was removed.

Another fascinating footnote to the story of the GI Consolidations is that of USA No. 610. Designated as the A-class, the 2-8-0 was nonetheless a near-copy of the wartime S160. USA 610 was constructed at Eddystone in November 1951 (by which time Baldwin had become Baldwin-Lima-Hamilton), carried construction number 75503 on its builder’s plate, and was used for steam locomotive maintenance training. It was the last steam locomotive build for American use at Eddystone and the last steam locomotive purchased by the U. S. Army. Today, it is preserved at the Tennessee Valley Railroad Museum.

Elsewhere in the world, a number of S160s survived either as static displays or restored to run in preservation with 6 of the 26 thought to have survived making their way back to the UK. The locomotives weren't built with extended service life in mind and were arguably constructed quickly, efficiently and with quantity, not quality, in mind to meet the demands of the war effort. As a result, some of those that have been restored to run maintain a reputation for being a little unreliable - a toss-up between that and its American / wartime appeal sometimes being made when hiring in for Galas and special events on heritage lines. Nevertheless, they are today incredibly popular and simple differences to domestic steam locomotives such as the low pitch whistle and the 'USA' markings on the tender make them an attraction to casual onlookers and railfans alike. Static display examples adorn railway museums in Poland, Turkey and Italy with more on display in scrapyard condition at a railway yard in Greece.

The S160's important contribution to both the Allies' war effort and rebuilding of damaged European nations exemplifies the overall contributions made by the USA. In time, this has been more popularly portrayed through efforts on land, sea and in the air but the assistance on the rails should also be appreciated and is so today by railfans on both sides of the pond. 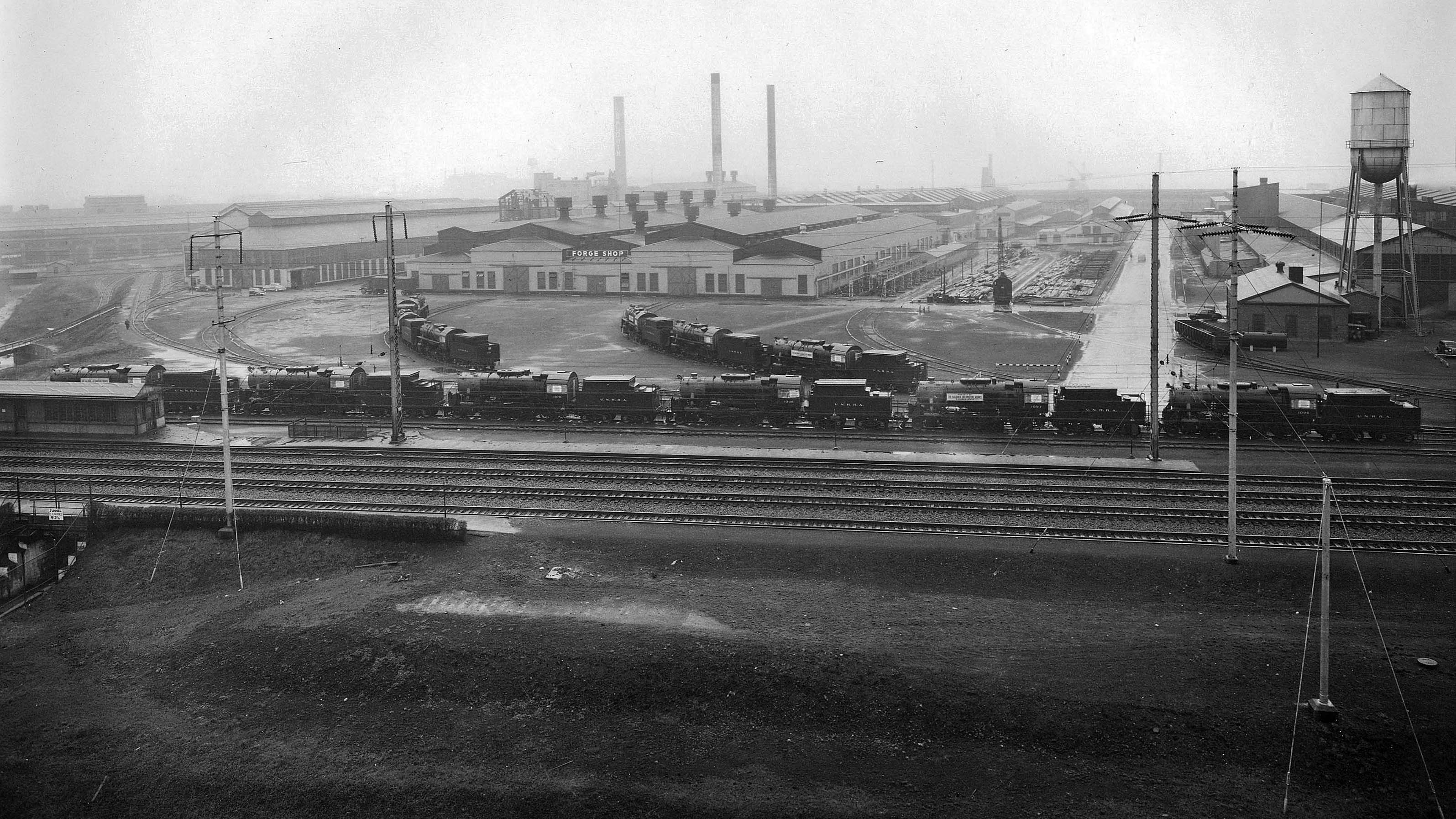 Assembled and ready for delivery at the Baldwin Locomotive Works, a group of post-war S160 copies wearing the initials of the United Nations Relief and Rehabilitation Agency stand in front of Eddystone’s forge shop in 1946. The four tracks in the foreground are the Pennsylvania Railroad’s main line, today Amtrak’s Northeast Corridor. Baldwin Locomotive Works photo via H. L. Broadbelt. 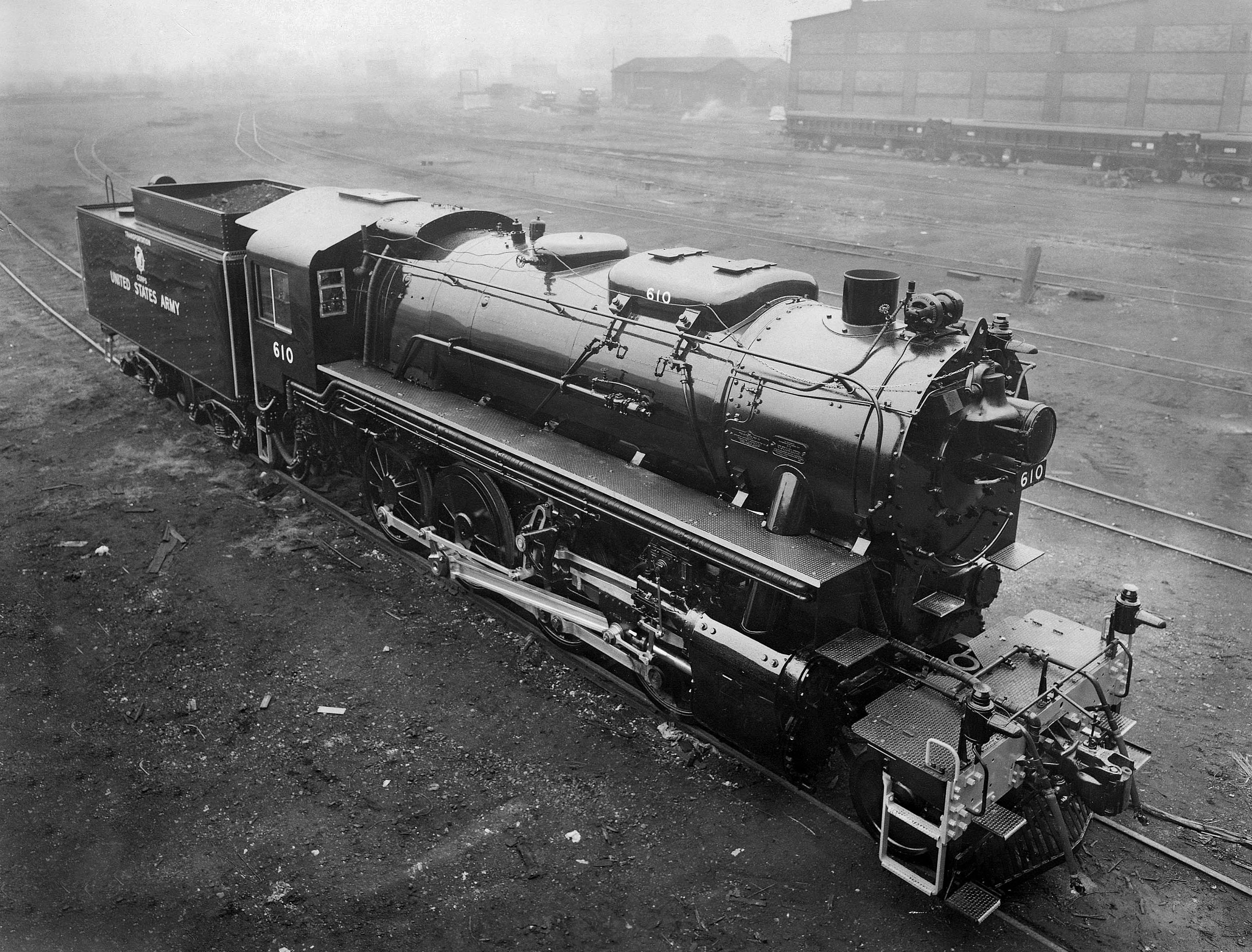 On a gray and foggy day at Eddystone, Pennsylvania in November 1951, Baldwin-Lima-Hamilton’s photographer turned his camera toward United States Army 610. The 2-8-0 was the last steam locomotive build for American use at Eddystone and the last steam locomotive purchased by the U. S. Army. Today, it is preserved at the Tennessee Valley Railroad Museum. Baldwin-Lima-Hamilton photo via H. L. Broadbelt. 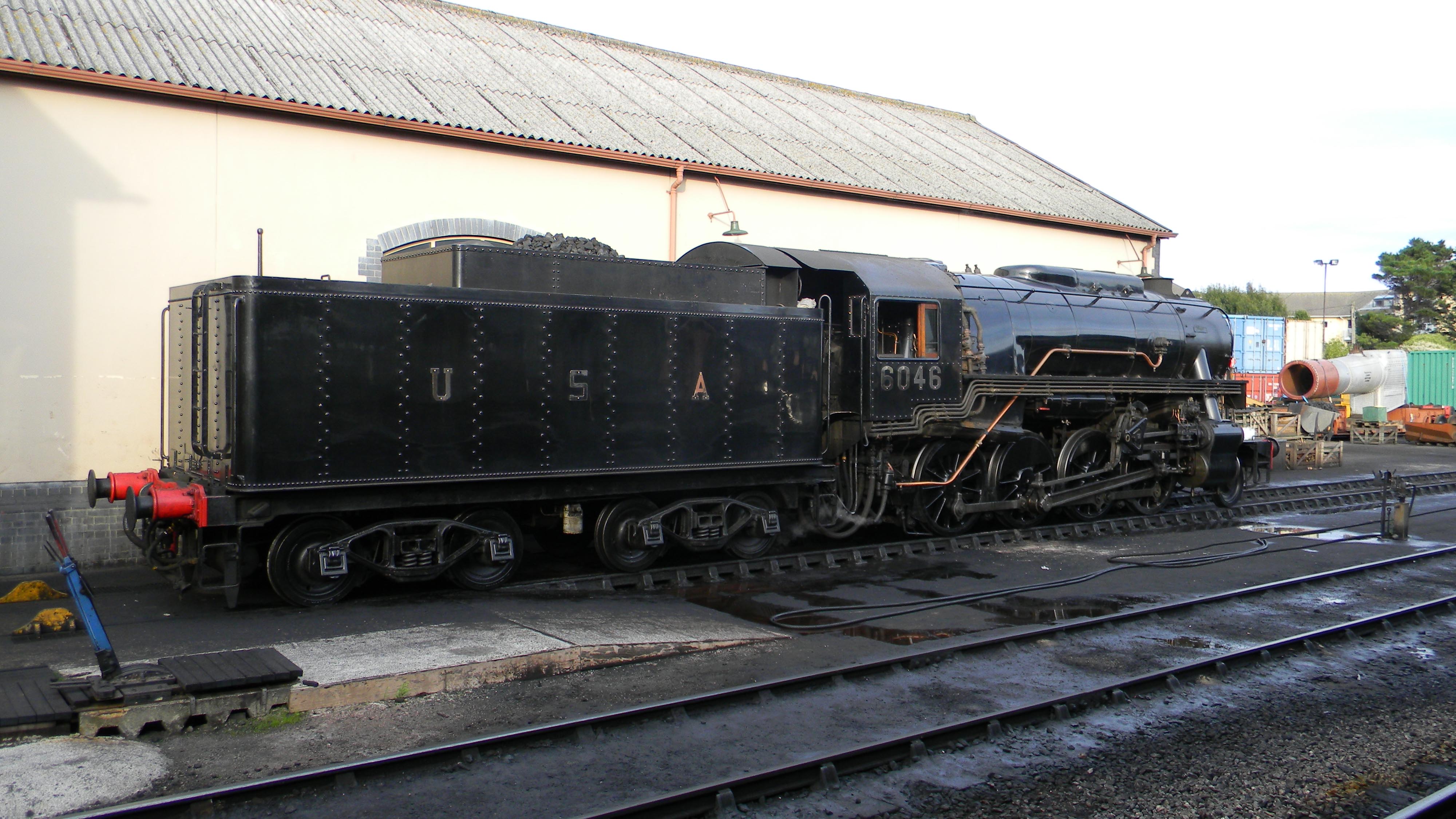 UK heritage railways account for much of the S160's use in preservation with the Churnet Valley Railway overhauling two in the last decade. One of them, 6046, is seen outside the shed at Minehead Station in Somerset (above), hired in by the West Somerset Railway for a period encompassing their 1940s weekend where it has featured hauling freight services to mimic those before the Normandy invasion (below). Both images are by Karen Rogers. 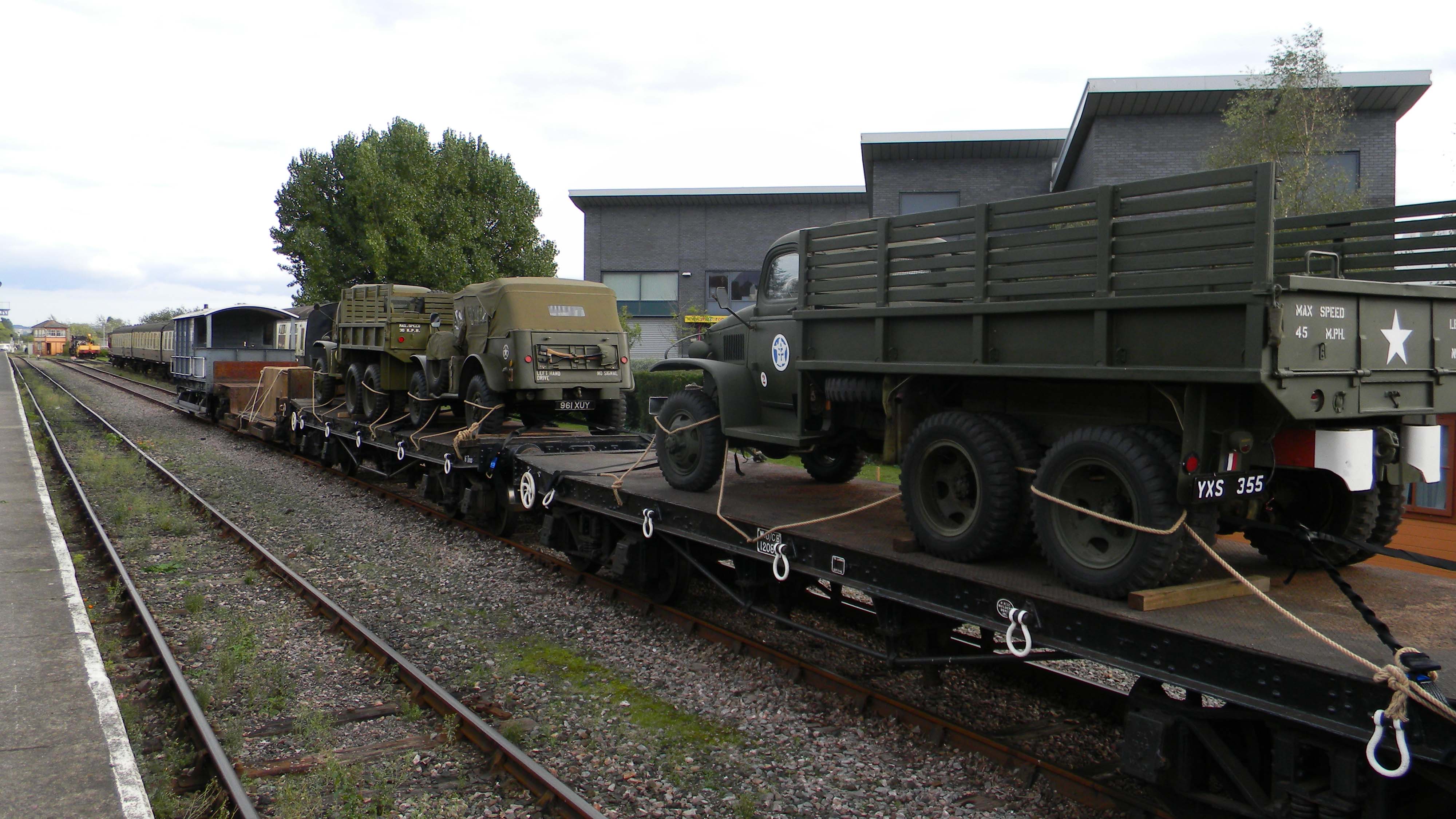 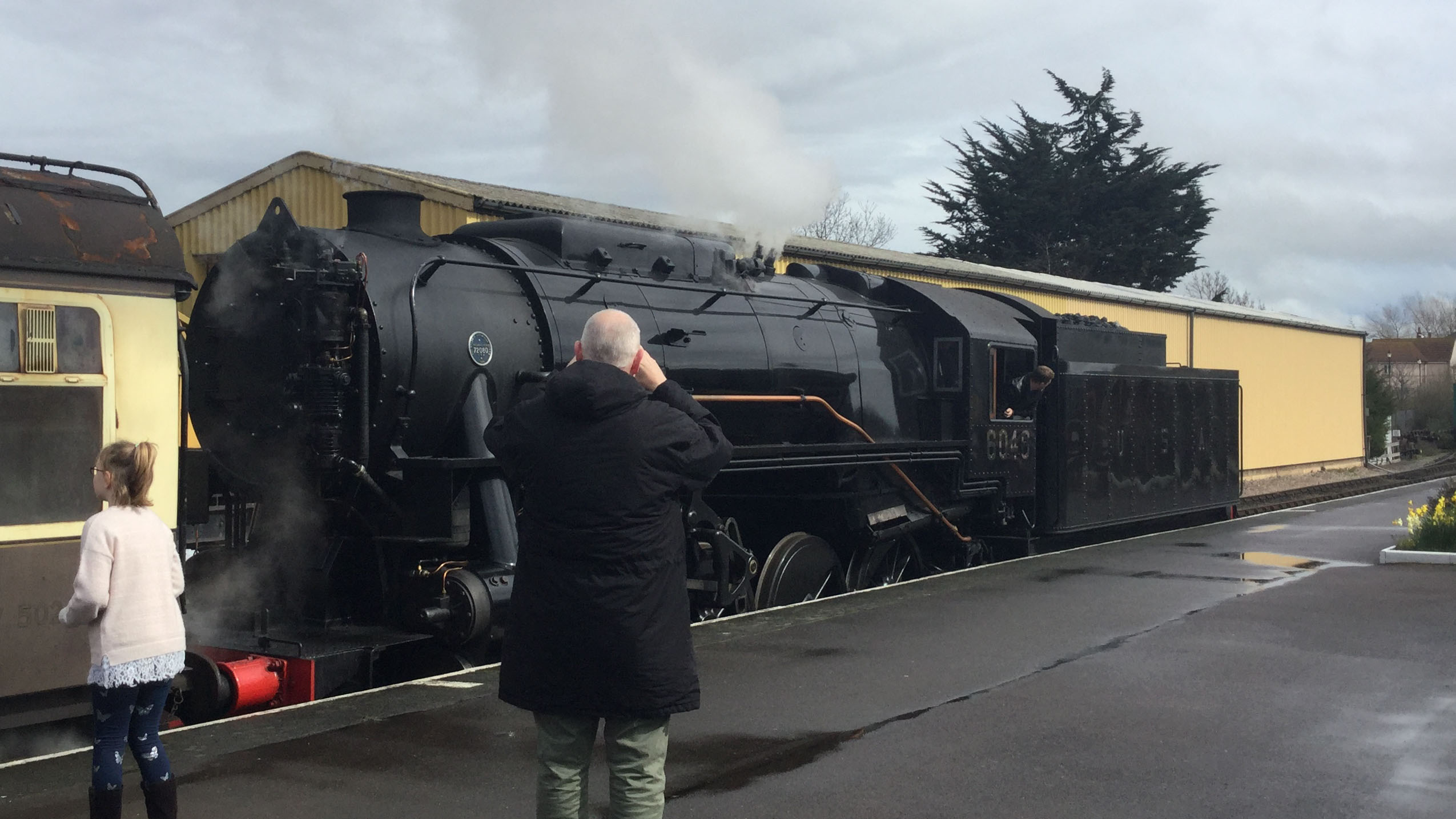 6046 also saw passenger duties at the WSR (above). Its life post-war was mainly along industrial lines in France and Hungary where it was originally marked for preservation before being sent for scrap by mistake. It was saved in time to be sent back to Britain where it has since run at the North York Moors Railway, Nene Valley Railway and its home at the Churnet Valley Railway. Photo by Joe Rogers. 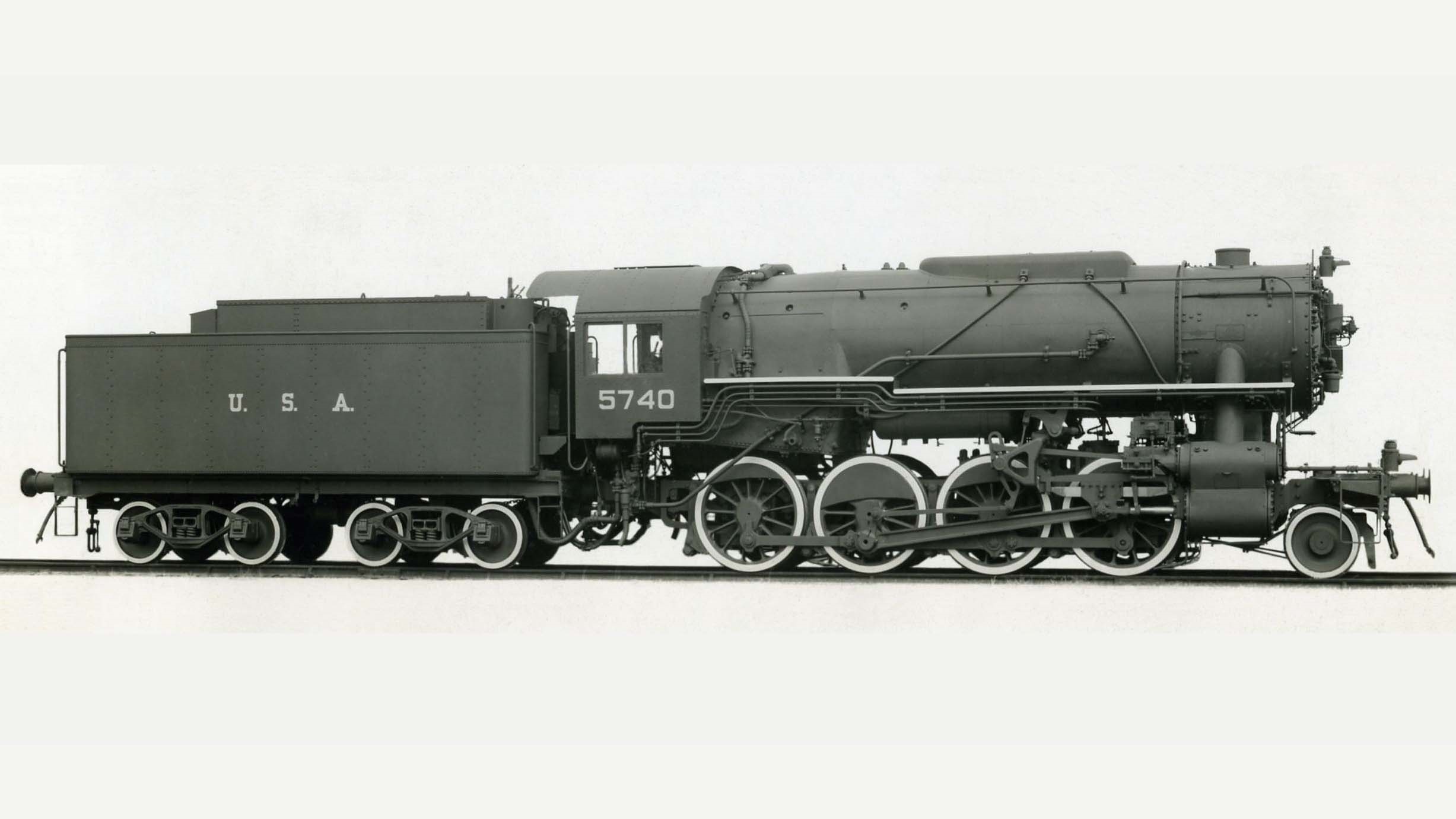 This public domain image of No.5740 (featured) highlights the aesthetic qualities of the S160. Photo: Lima Locomotive Works.