Words and photos by Gary Dolzall

The Sixties: It was, of course, an extraordinary decade, whatever the measure. It was a time of social change and turbulence, a time of achievement, a time of uncertainty. And such it was for railroading, too. In North America, the 1960s marked the final swansong of the steam locomotive in regular service, the slow but unrelenting demise of the long-distance passenger train, the coming of the second-generation diesel “horsepower race,” the flowering of intermodal service, and, especially for railroads in the eastern half of the country, ever-greater market and economic challenges.

The Pennsylvania Railroad and the New York Central were two of America’s greatest and most famous eastern railroads, and for decades the roads were industry leaders, arch competitors, and, in fact, intense and sometimes bitter rivals. By the 1960s, the changing dynamics of American railroading and the fact the two railroads’ route maps largely overlapped each other resulted in what might have once been unimaginable – the Pennsy and New York Central would choose to become one. In May 1962, the stockholders of the two eastern giants approved a prospective merger of the two railroads, but Interstate Commerce Commission approval of the merger would take nearly a half-decade.

At its creation, Penn Central stretched more than 20,500 route miles in length, spinning its rails from New England and the Northeast, across the industrial Midwest, and reaching west to Chicago and St. Louis. Penn Central was host to the ex-PRR’s great New York - Washington electrified passenger corridor, to the expansive commuter train operations in the Northeast, to expansive freight tonnage moving between the east and west, to coal tonnage mined in Pennsylvania and West Virginia, to countless miles of Midwestern granger lines, and to legendary locations such as the ex-PRR Horseshoe Curve line and ex-NYC “Water Level Route” and magnificent passage along the banks of the Hudson River.

But the new giant almost immediately proved troubled. Both PRR and NYC had been profitable in their final independent years, but that profitability proved a mirage as integration of the two titans went poorly. The cultures of the NYC and PRR were profoundly different, with the Central tending to be aggressive and innovative and the Pennsy , and the integration of the two turned into a tussle as the railroad was burdened with extensive and often unproductive branch lines and redundant trackage. Then, too, PRR’s pre-merger profitability had been achieved in no small part from years of deferred maintenance. As a condition of its merger approval, the PC was also obligated to take over the financially distressed, 1,500-mile New Haven (NYNH&H), which further laden the railroad with losses, especially from declining passenger and commuter services. NYNH&H was merged into PC on December 31, 1968.

It all proved too much. In its first year, Penn Central lost $2.8 million, a relatively modest sum for a newly formed company of its size, but the losses quickly ballooned – to $83 million in 1969 and $325 million in 1970, and on June 21, 1970, the Penn Central filed for bankruptcy, becoming, at the time, the largest bankruptcy in American history.

For investors and Wall Street, the Penn Central became little more than a death watch. But for railroad enthusiasts, the story was quite different. Albeit on a physical plant that became ever more ragged around the edges and with its locomotives dressed in somber black, the Penn Central nonetheless could be counted on to put on quite a dramatic show from trackside as it operated over a system that in route miles was longer than today’s Norfolk Southern, called upon the likes of the famed GG1 to hustle passengers along the Northeast Corridor, and toted enormous volumes of tonnage.

For the locomotive enthusiast, Penn Central was virtually nirvana. From PRR, NYC, and New Haven, the Penn Central inherited and operated an extraordinary menagerie of locomotives and equipment. PC inherited 2.181 locomotives from PRR, 1,799 from NYC, and 316 from New Haven and among this fleet were the products of six locomotive builders (Electro-Motive, Alco, General Electric, Baldwin, Fairbanks-Morse, and Lima-Hamilton). The roster PC inherited ranged from new and potent EMD SD45s purchased by the PRR shortly prior to merger to ancient ex-PRR DD1 electrics built in 1910. During what would prove to be Penn Central’s short life, the railroad, in an attempt to modernize and standardize its roster, would purchase nearly 1,000 additional units, including nearly 500 EMD GP38 and GP38-2 diesels. In total, Penn Central operated more than 90 different diesel and electric locomotive types!

As a young railroad enthusiast growing up in the Midwest and with the opportunity to travel during the Penn Central years, I had the chance to experience the troubled titan often and across much of its sprawling system. Two locales were my favorites for watching the Penn Central, one of which was distant – legendary Horseshoe Curve (see the WARF article “Horseshoe Curve, an Appreciation”). The other was close to my Indiana home and thus subject to regular visits – it was Penn Central’s Cleveland-Indianapolis-St Louis route, which in PC’s thick green Southern Region employee timetables bore the impressive designation of “Main Line.” True to its name, the route was alive with traffic, and particularly compelling was any visit to the sprawling ex-New York Central Big Four Yards at Avon, Indiana, a few miles west of Indianapolis. Avon was a place that was without exception bustling, and more often than not its engine terminal hosted an assemblage of black-clad diesels worthy of discovery.

Inevitably, given the depth of its financial distress and the importance of its routes to the North American rail system, the solution to the Penn Central debacle had to be found.

And it was. Under the auspices of the governmental United States Railway Association, the Consolidated Rail Corporation – Conrail – was formed in April 1976 to assume the properties of the Penn Central and other financially troubled eastern railroads (including Erie-Lackawanna, Reading, Lehigh Valley, and Central of New Jersey). Starting life in a trimmed-down but still expansive 17,000-mile route system, Conrail was given little chance for success by many industry observers. But “Big Blue,” in no small part due to the leadership of L. Stanley Crane (who came to Conrail from the Southern Railway), proved them wrong. Largely freed of its commuter- and passenger-carrying burdens by regional transit authorities (such as Metro-North, NJ Transit, and Boston’s MBTA) and Amtrak, and with federal funding to rebuild its key infrastructure, Conrail further trimmed itself to some 13,000 route miles, modernized its equipment, and optimized its operations – and beginning in 1981, turned profitable. The Phoenix had risen.

Its task of revitalizing Northeast railroading, including key portions of the old Penn Central, accomplished, Conrail was sold in 1998 to giants CSX and Norfolk Southern. Today, key segments of what was once the troubled Penn Central are alive with the passage of freight, commuter, and passenger traffic. 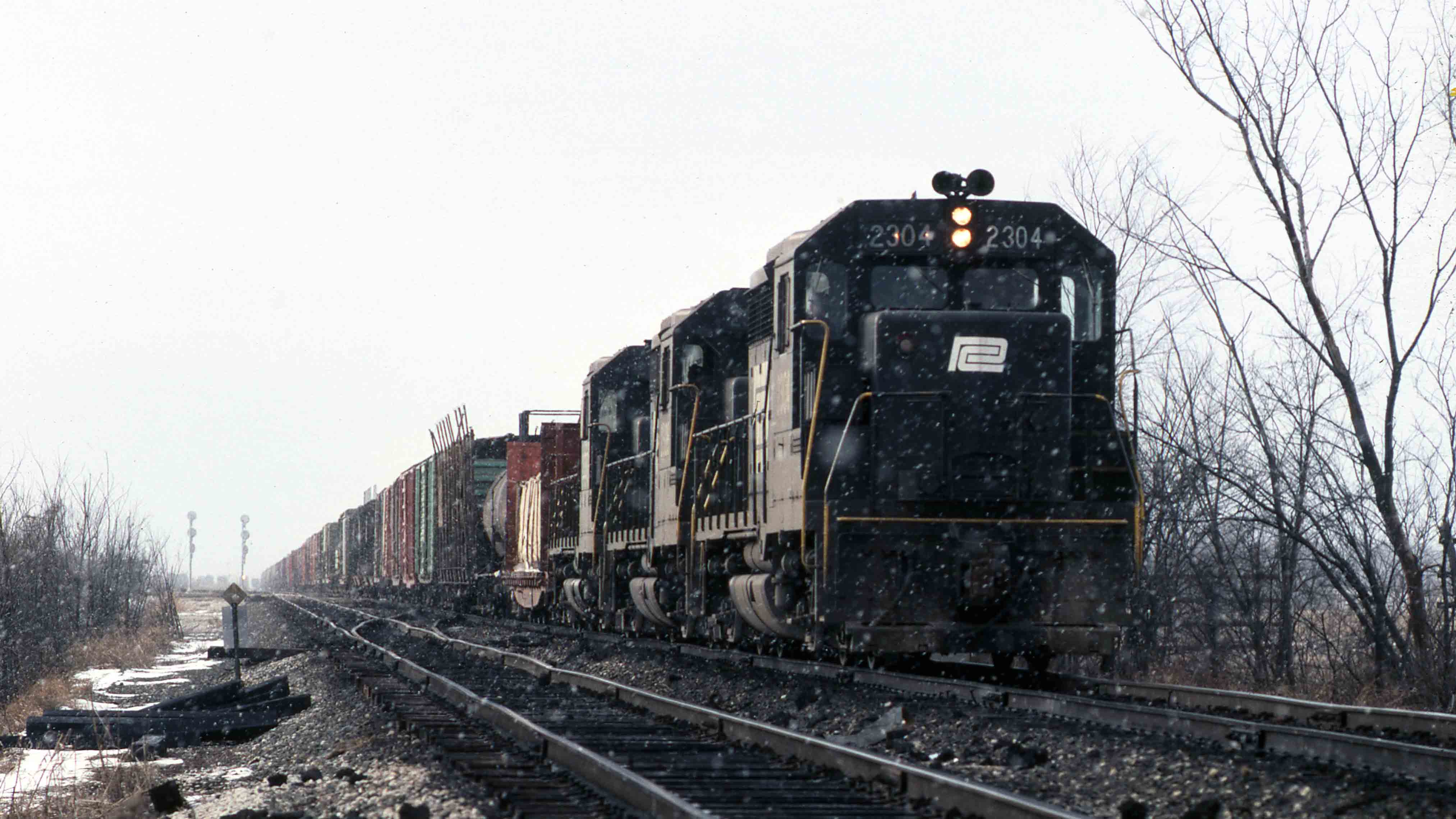 Snow has begun to fall as a Penn Central manifest makes its departure from the railroad’s sprawling Big Four Yards near Indianapolis, in February 1976. On the point is ex-Pennsylvania EMD GP35 2304. Black-clad diesels and less than ideal trackage was, indeed, symbolic of the troubled railroad titan. 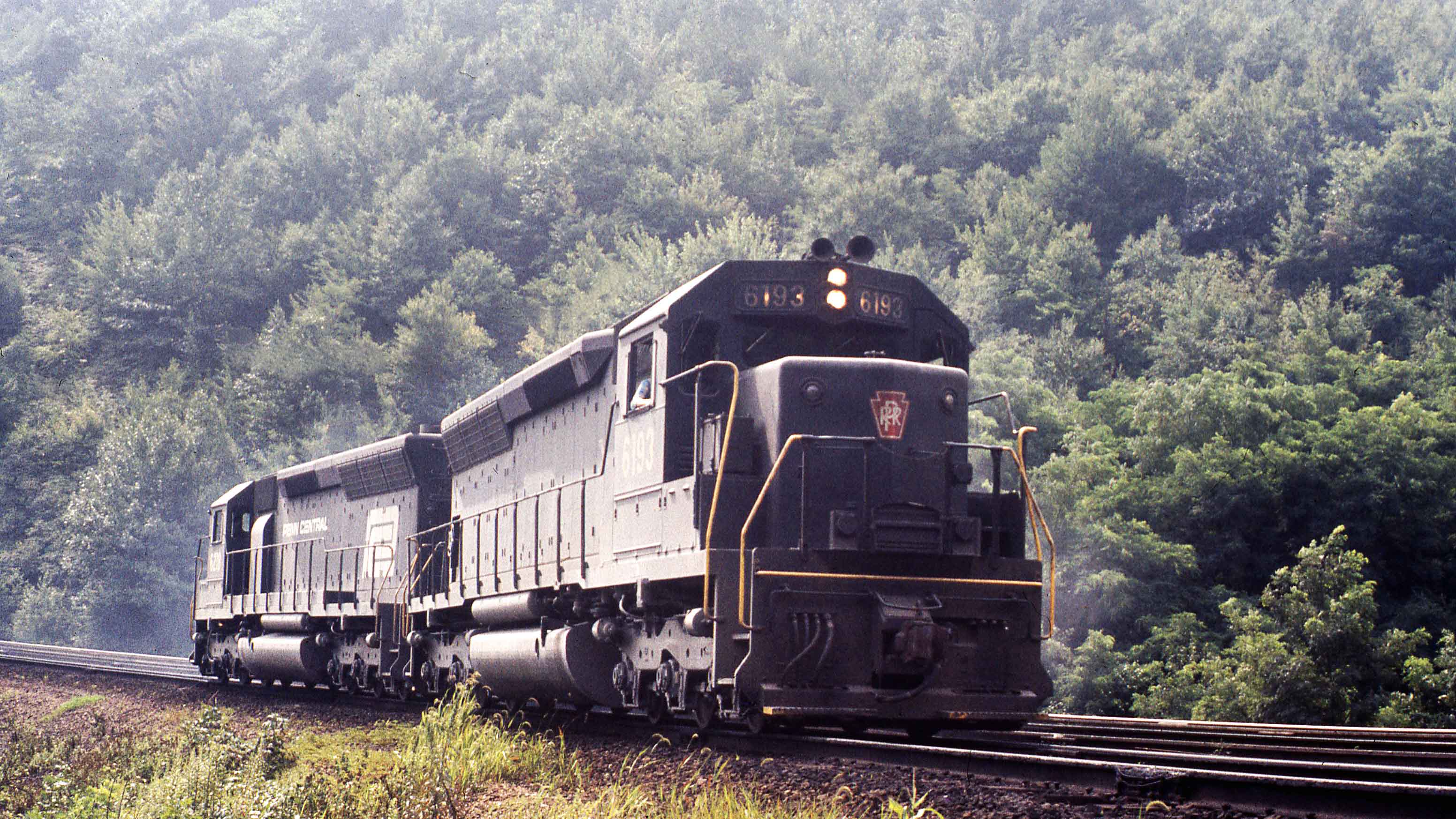 Predecessors: The 20,500-mile Penn Central was created in 1968 through the merger of eastern giants and long-time rivals, the Pennsylvania Railroad and New York Central. At the Pennsy’s signature location – famed Horseshoe Curve – a pair of EMD SD45s, one dressed in PRR livery, the other in new PC dress, drop around the curve in helper service (above). Amid a snowstorm at Marion, Ohio, in 1968 shortly after the creation of Penn Central, New York Central GE U25B 2508 and two EMD sisters are working ex-PRR trackage (below). 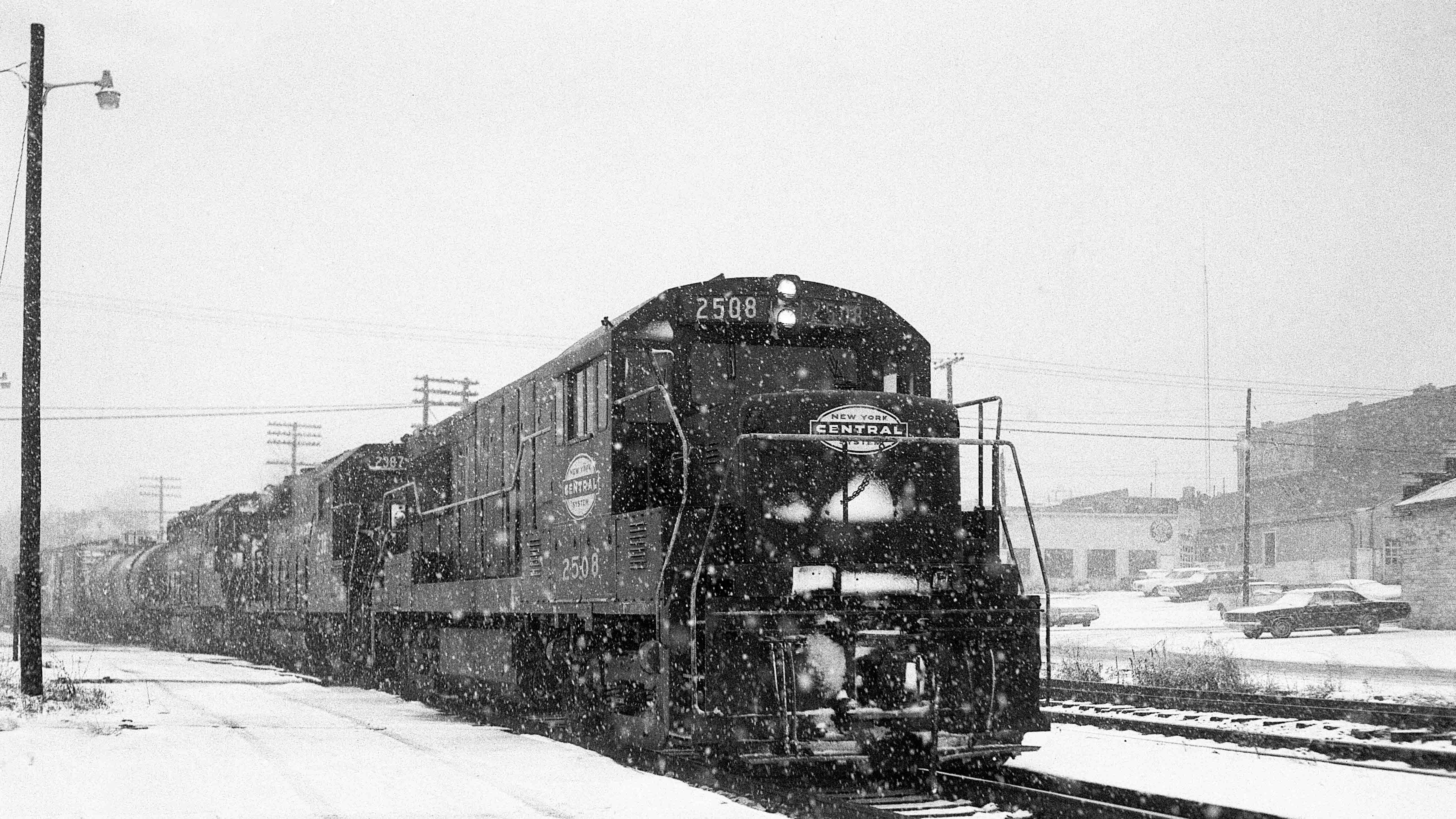 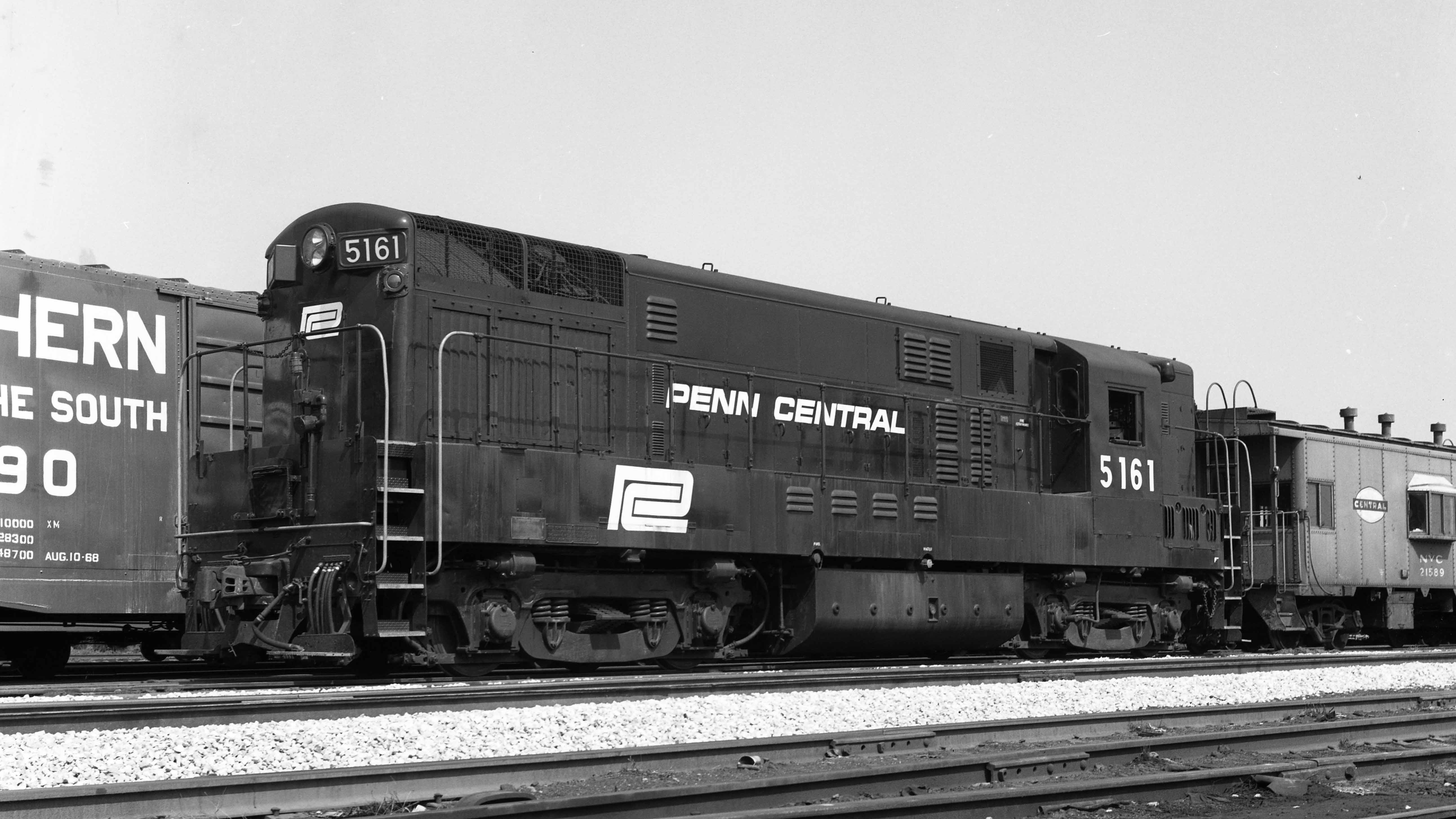 Representative of both the PC’s menagerie of motive power and the third entity to join Penn Central is ex-New Haven Fairbanks-Morse H16-44 5161, which began its life as NYNH&H 1601 in 1956 and joined the PC fleet with the merger of New Haven into Penn Central in December 1968. In a simply extraordinary roster, Penn Central called upon more than 90 different diesel and electric locomotive types constructed by five builders! Photo: Dolzall collection. 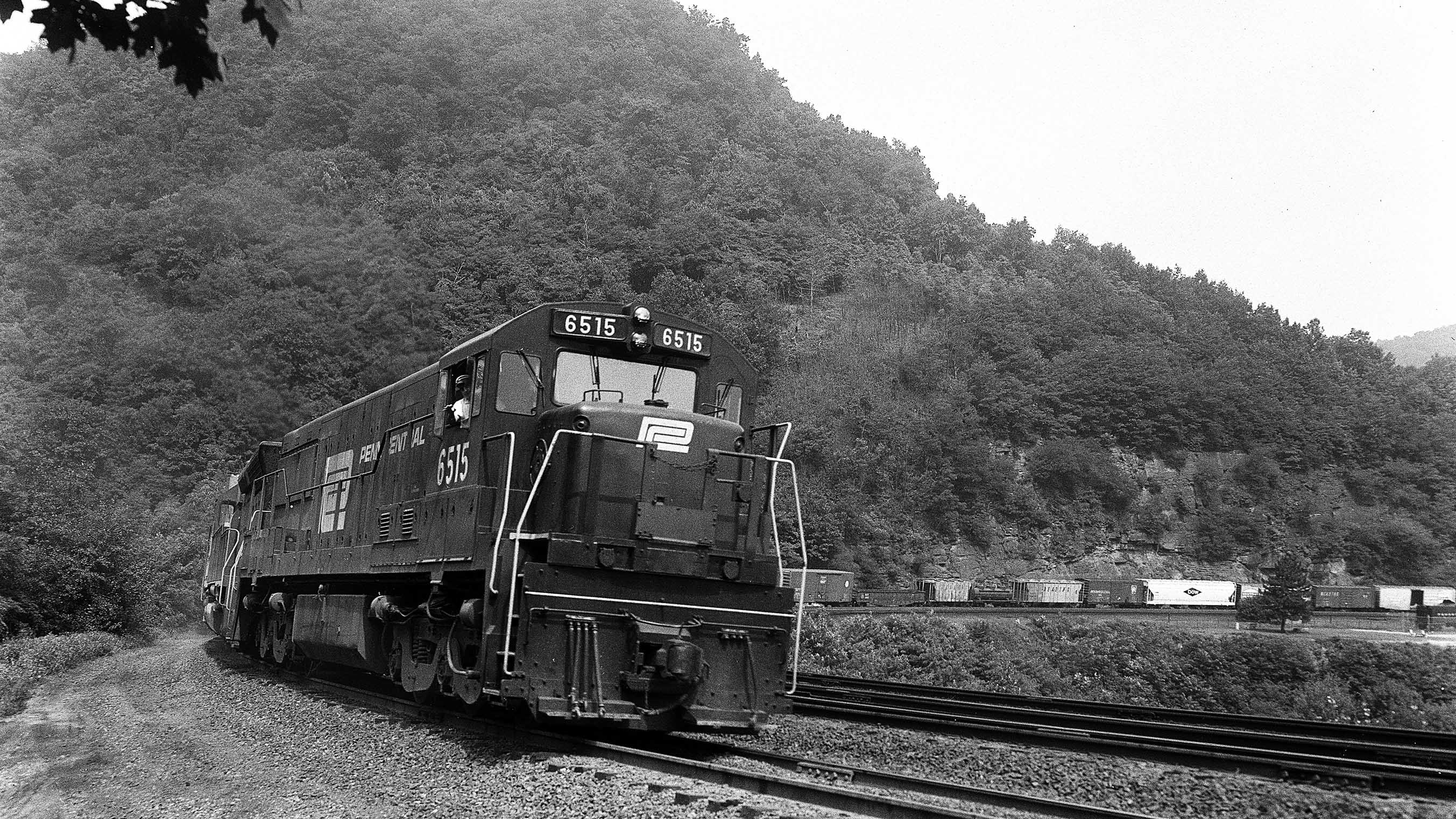 In August 1969, a rare General Electric U25C is leading a westbound manifest freight making the westbound climb of the Alleghenies at legendary Horseshoe Curve. The six-axle, 2,500-horsepower GE was one of 20 U25Cs purchased by the PRR in 1965. 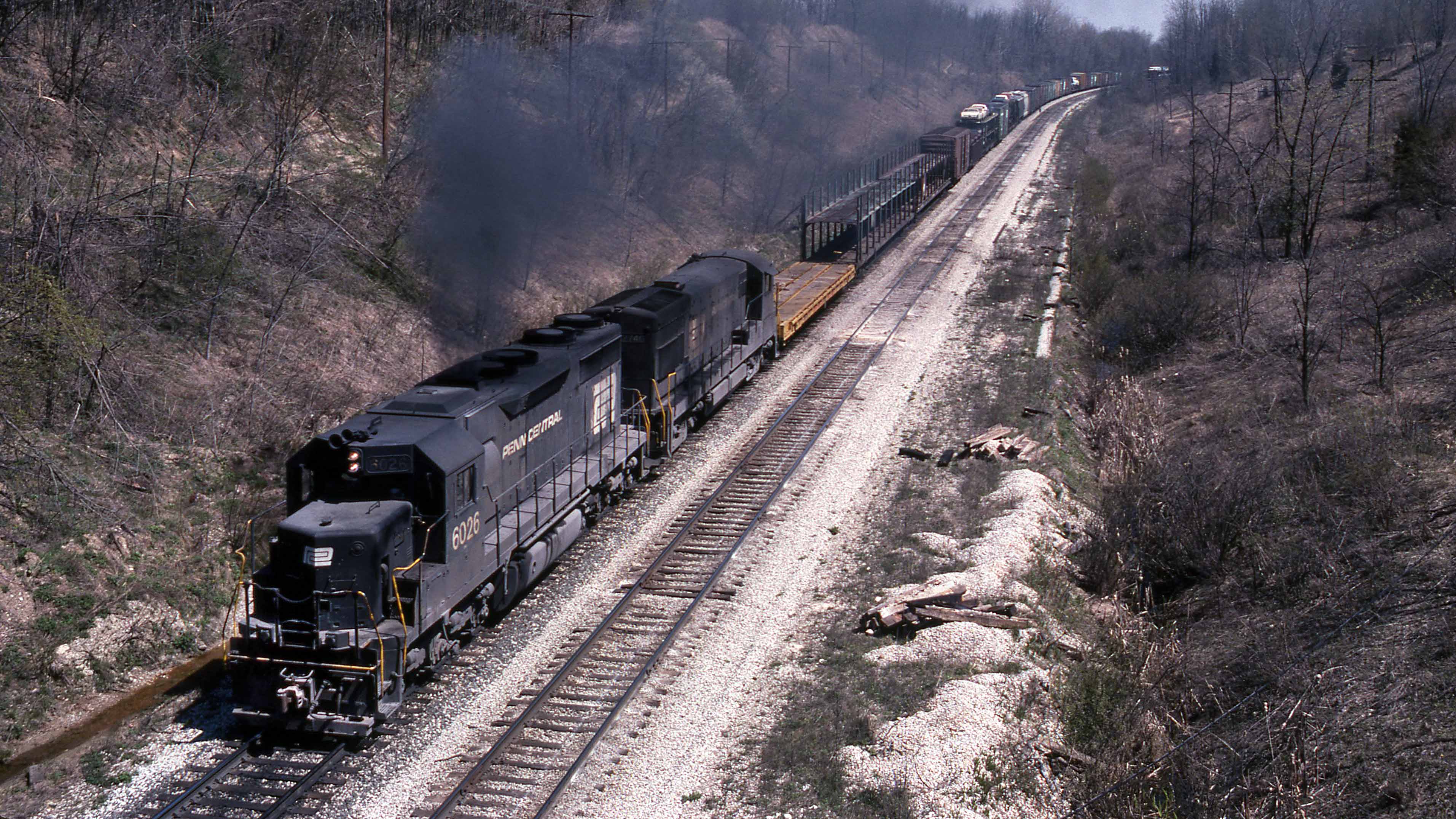 The author’s home state of Indiana was a spiderweb of Penn Central trackage, allowing countless opportunities to experience the troubled titan. A favorite haunt for train-watching was PC’s ex-New York Central main line west of Indianapolis, which, despite the railroad’s troubles, was always bustling with activity. Near Danville, Indiana, in the spring of 1976, a smoky EMD SD35, along with a GE U-boat, is leading a westbound manifest. 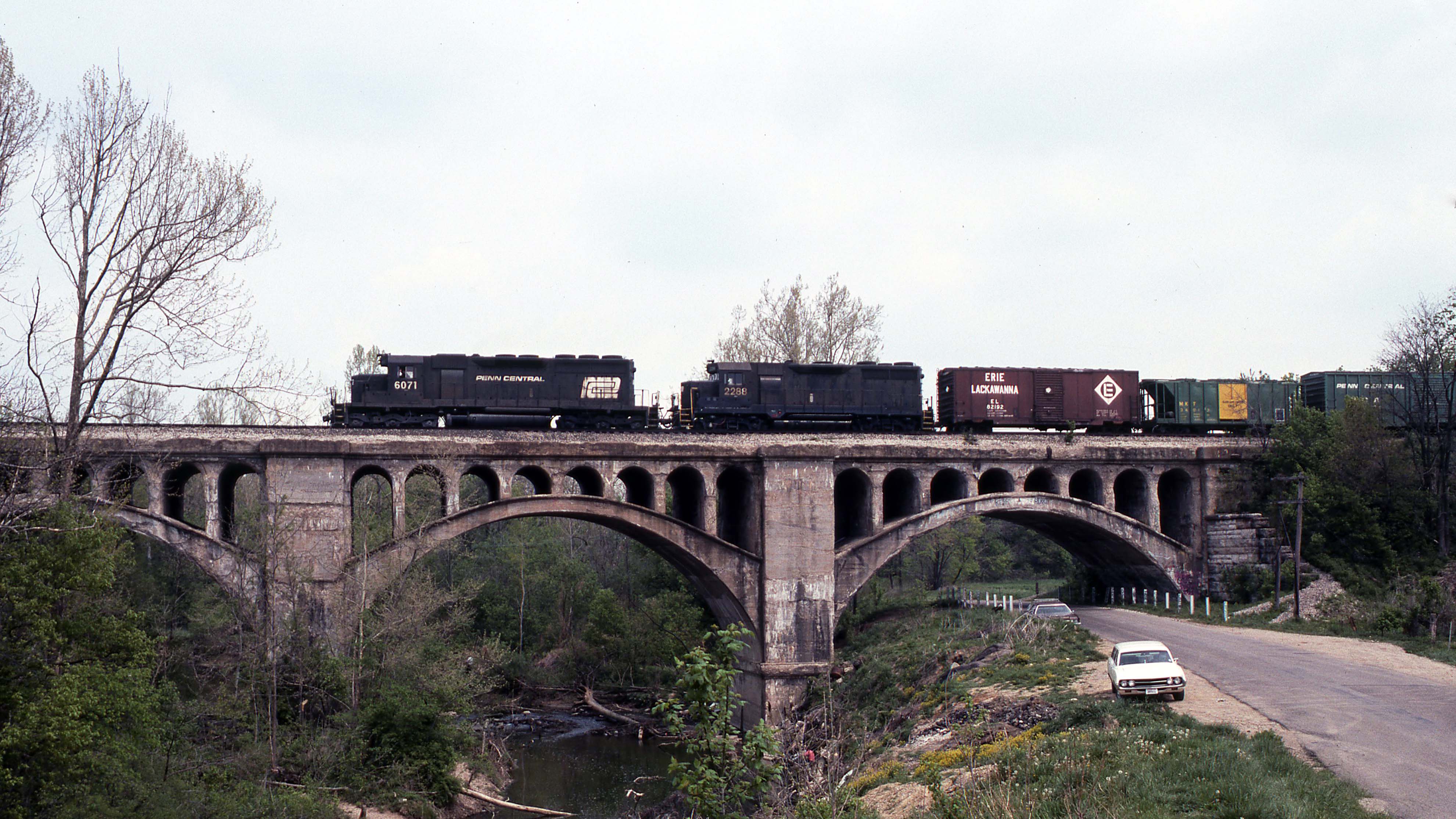 Penn Central SD40 6071 and GP35 2288 ride across White Lick Creek atop a concrete arch bridge near Danville. Both diesels began their careers in the service of the PRR (above). At Greencastle, Indiana (below), a trio of veteran Electro-Motive Geeps are toting eastbound tonnage. PC 7417 is an ex-New York Central GP9. 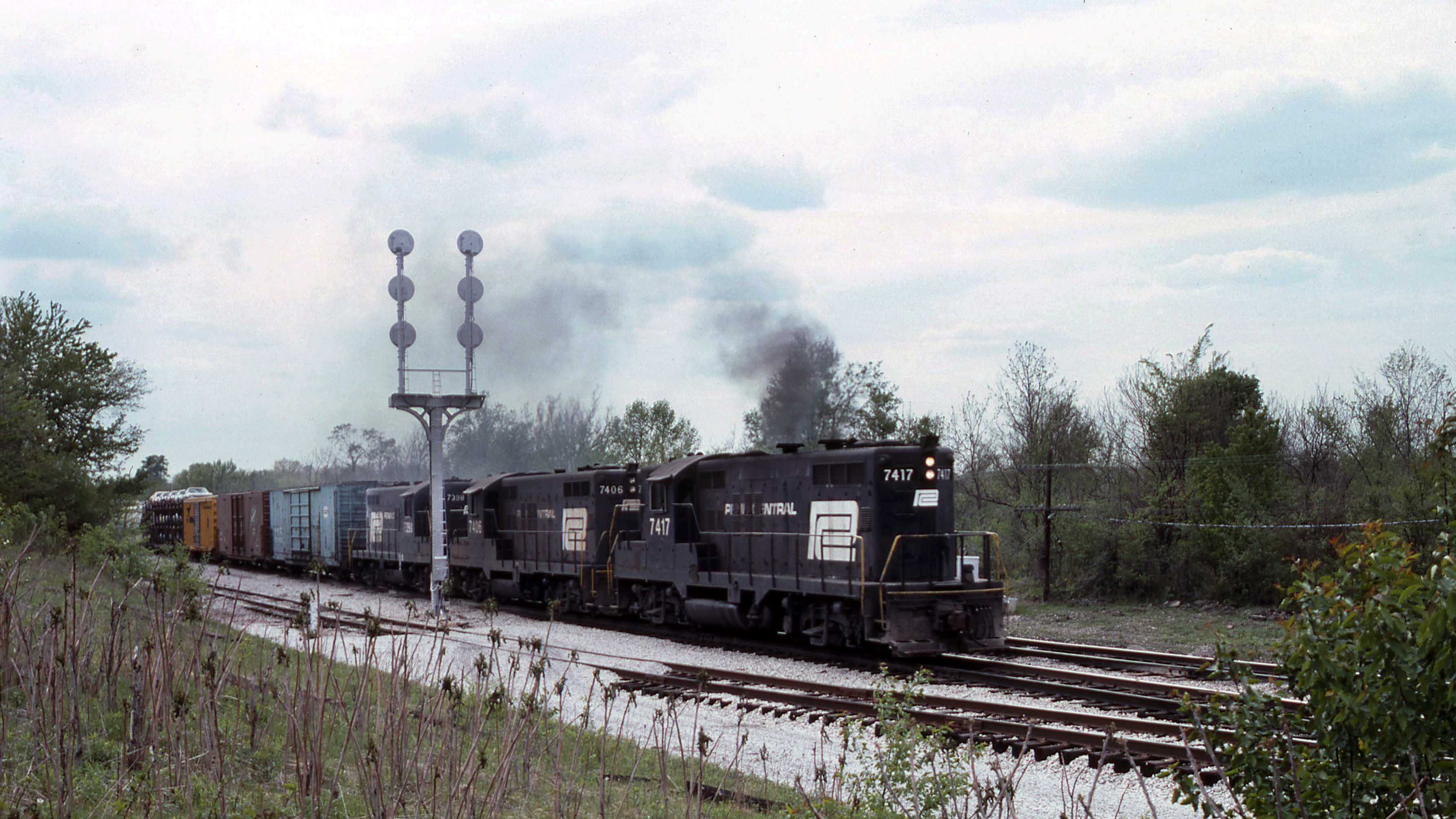 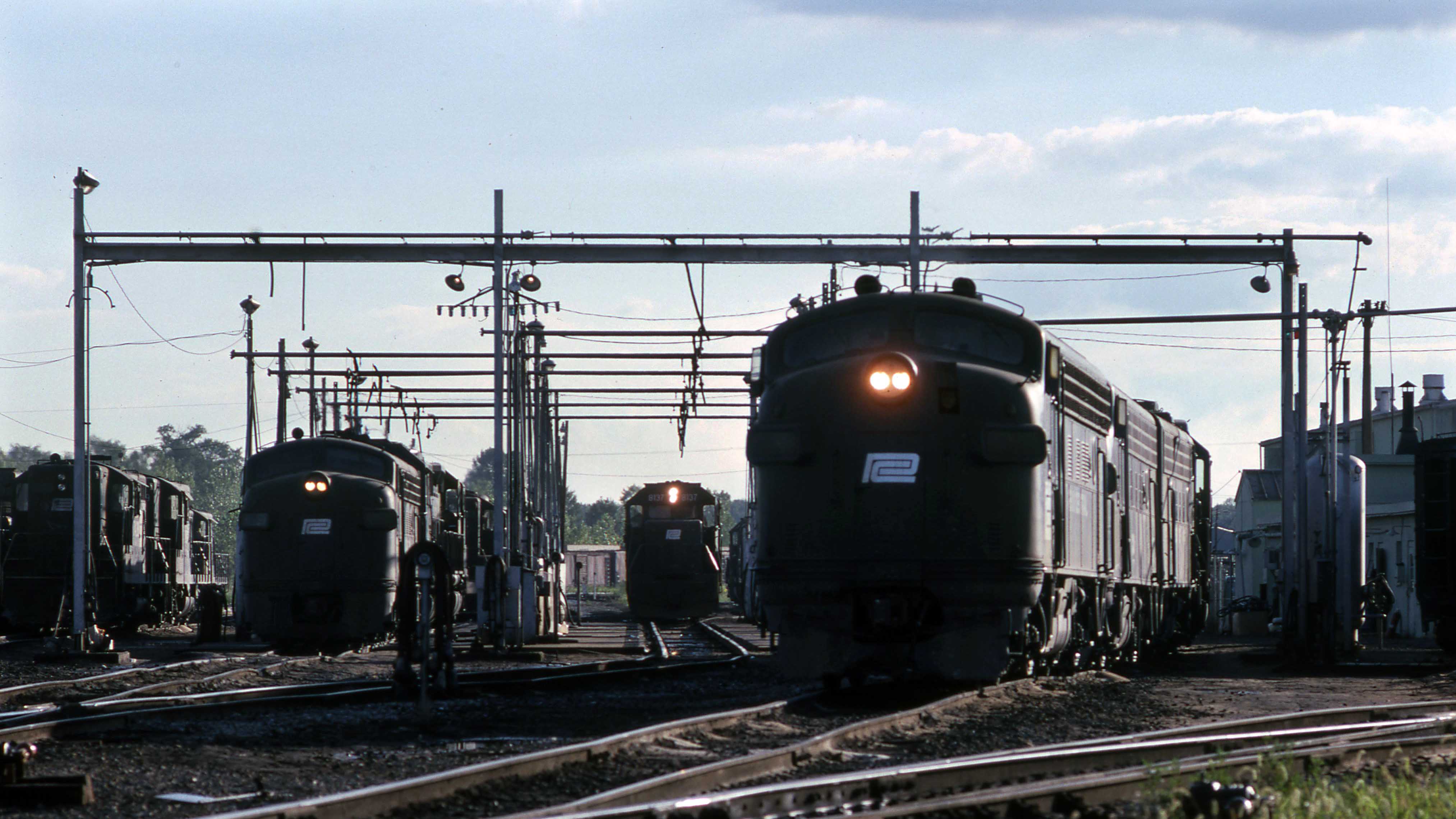 In the Penn Central era, a visit to the engine terminal of the railroad’s sprawling Big Four Yards at Avon, Indiana, was certain to be compelling. On a late summer afternoon, classic PC F7s dominated the scene (above), while on another blue-sky day (below), big ex-PRR Alco C630 was the highlight. Also on hand is PC 2109, a rare ex-NYC GP20 and several Geeps. 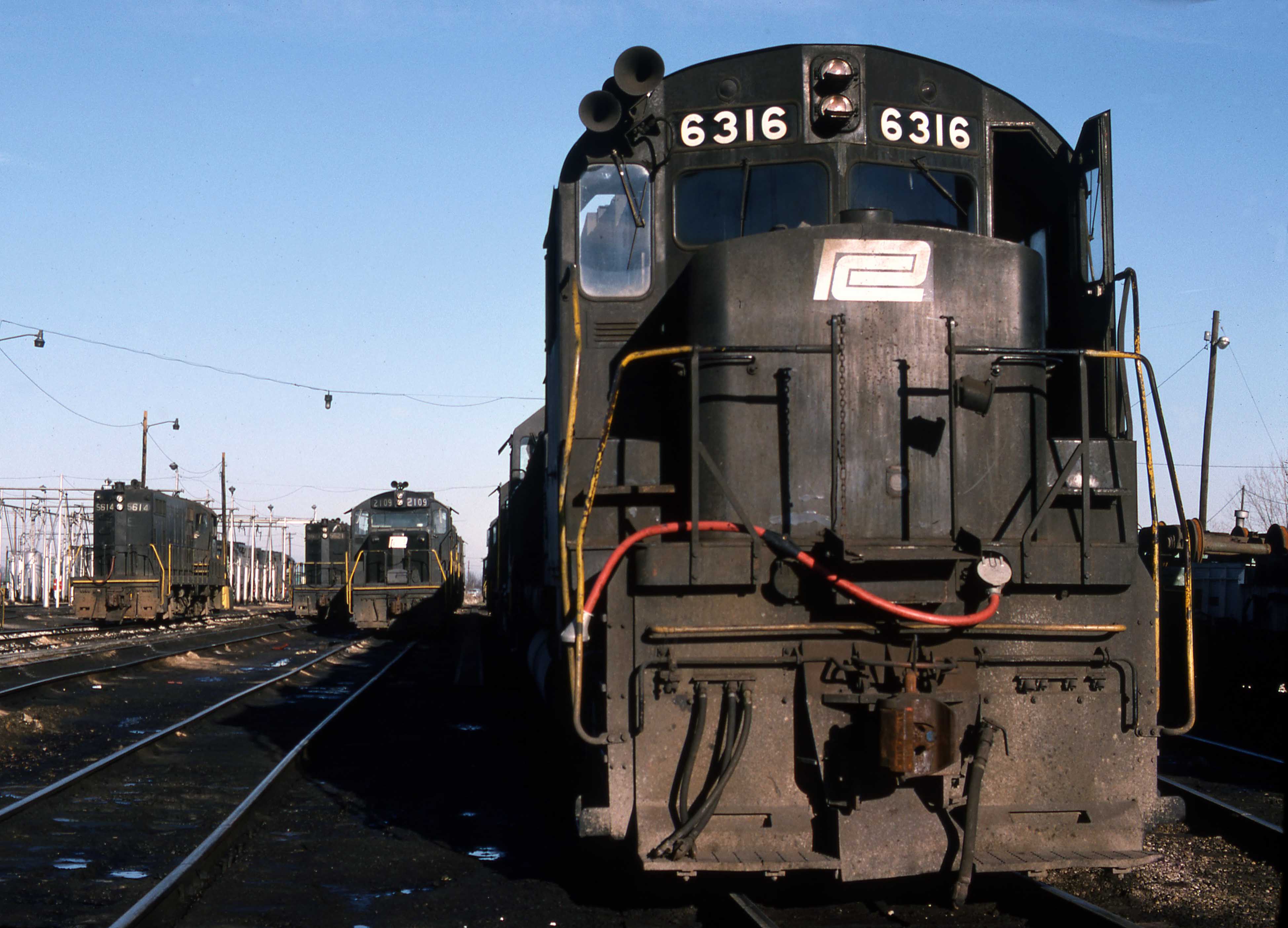 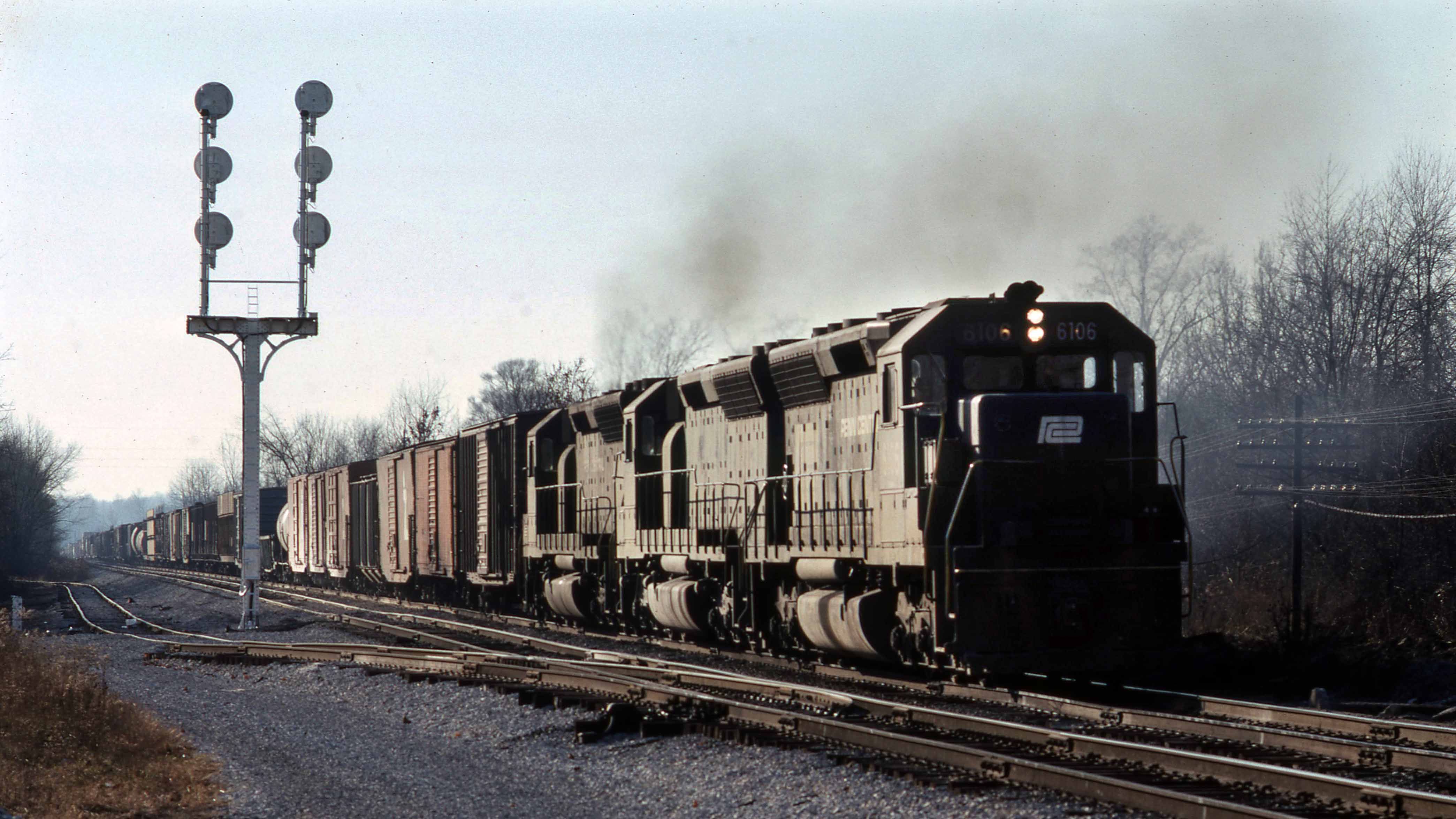 Belying the troubled existence of the Penn Central, the railroad puts on a show of dramatic, big-time main line railroading as a trio of EMD SD45s totaling 10,800 horsepower have tonnage rolling eastbound at Greencastle, Indiana, on a November eve in 1975. The Penn Central was a troubled titan, but for the train-watcher, it was assuredly a compelling experience.