The Pennines: Trains in the Landscape

Railfan and photographer David Hayes looks back at his past and displays examples of his craft from his latest book - The Pennines: Trains in the Landscape.

Born in Nottingham in the mid 1950s, and living less than 400 yards from Beeston station, it was almost inevitable I developed an early fascination for trains – not least because I was taken down there as a toddler to keep me amused! By the age of six I was making my own way there and school holidays would often find me sat on the station footbridge overlooking the signal box and level crossing keenly watching proceedings and collecting numbers. It was a fascinating time – steam was still plentiful and coal traffic substantial with trains often held in the local passing loops waiting for a path.

But times were changing. Diesels were becoming increasingly common, and it wasn’t unusual to see recently built locomotives not yet listed in the Ian Allan ‘Combines’ – including the first Brush Type 4s, and a couple of Claytons out on test runs! Number collecting becoming a more serious pursuit facilitated by parental clearance for train journeys to then exotic destinations of Trent Junction, Derby and, later on, Sheffield. Steam was still around but, by this time, becoming scarce.

It was in 1967, by way of a birthday present, that I found my way into photography. The Kodak Instamatic had its limitations but still produced a few passable shots and some of my most treasured ones too. Take up was a slow-burn however, partly because pocket money didn’t run to supporting spotting trips, a model railway and photography costs, but also because my earlier snapping efforts were discouragingly poor.

By 1973, with an income of sorts, I took more of an interest in the way the railway scene was evolving, and made a conscious effort to try capture those changes on film. The Instamatic was ditched and I borrowed my Dad’s Agfa Billy Zero folding camera. It was quite a step up and made for a steep learning curve trying to master the technical aspects of photography. It had its disadvantages though, including the viewfinder standing away from the lens, and the 127 film being only 8 exposures. If these weren’t irritations enough its demise was assured when I failed to wind on the film after snapping the Blue Pullman arriving at Paddington – the resulting double exposure captured the Pullman and one of the soon to be withdrawn Westerns. Ouch!

From there I moved on to a Zenit E, a massive advancement on the Billy Zero. Then three years later and now working full-time, a pair of Nikkormat FT2s – one for slides and the other for black and white. By now travelling all over the country in my spare time, it’s fair to say I’d become pretty obsessive about the whole rail photography lark, and the years 1974 – 1980 were my most productive yielding a few thousand slides and negatives.

The early 1980s though saw my interest start to wane and I began to feel ‘I’d done my bit’. Other commitments came along and, when family and work responsibilities took over, rail photography ground to a halt. Several years living in Europe and the US didn’t encourage me to get involved again, and I all but lost touch with the UK scene. It was only a return to the UK in 2010, with retirement on the horizon, that prompted me to dip my toe in the water again and I made a few trips out with the camera from our new location in Cheshire. I quickly became enthused and soon figured the part-frame digital camera acquired in the US couldn’t deliver the quality I was after. It was when I retired that, as a present to myself, I bought a full-frame Canon EOS 5D Mk3 along with 16-35, 24-105, and 100-400 lenses. The kit is heavy and a day trekking around the hills can be tiring, but I couldn’t be happier with the images produced. All the photographs in my book The Pennines: Trains in the Landscape were taken using this set up.

To accompany the article I’ve chosen seven images – three from the 1970s, and four which appear in the book – I hope you enjoy them! 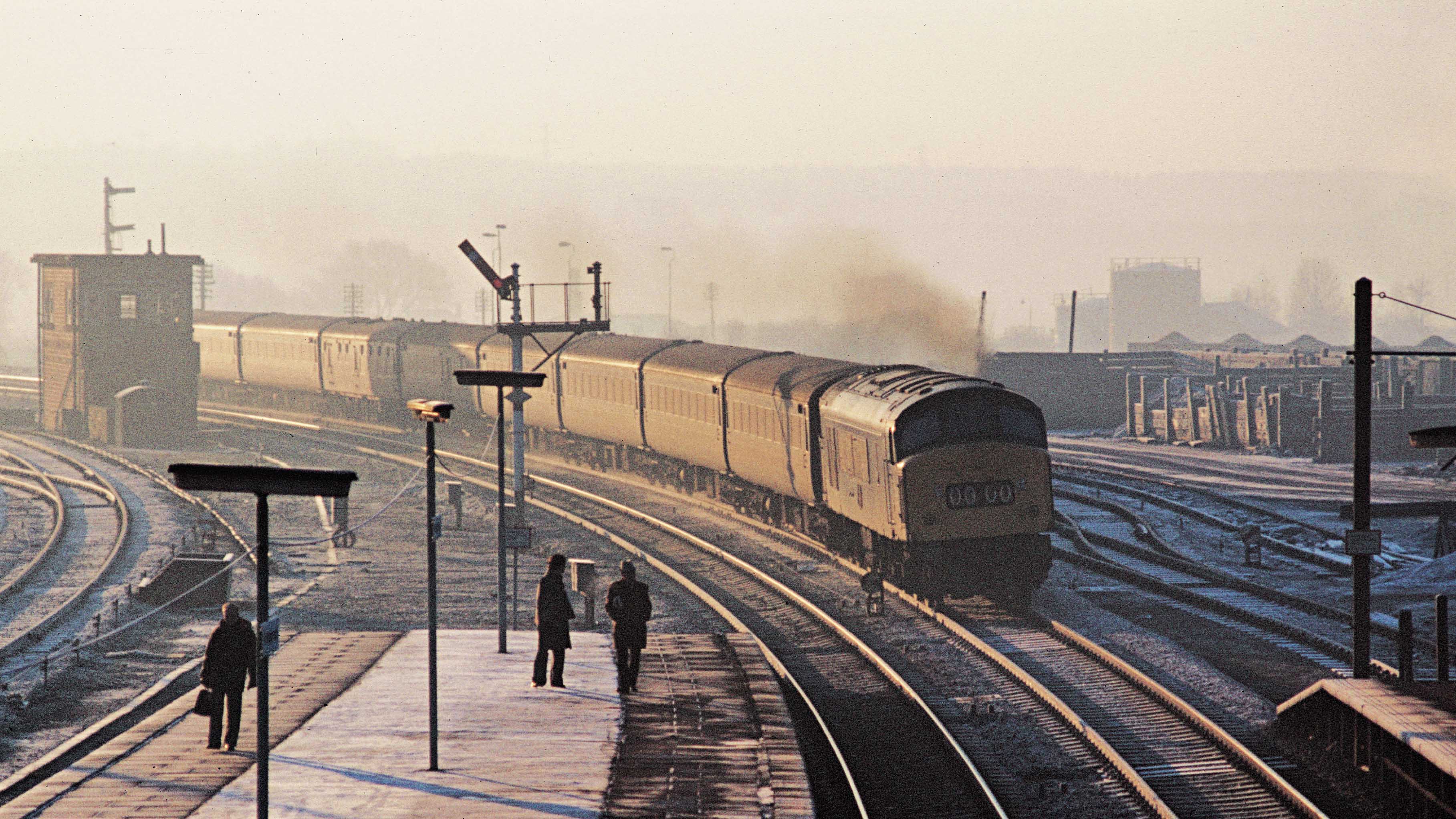 Mainstay of the Midland Mainline through the mid-70s and into the 80s were the class 45/1 ‘Peaks’. Fifty were converted to service the air-conditioned Mark 2 carriages cascaded down from the other regions, and which seriously enhanced passenger comfort. Seen at Wellingborough on a bitterly cold winter’s day is unit 45114 speeding north with a London to Sheffield service. 10th December 1976. 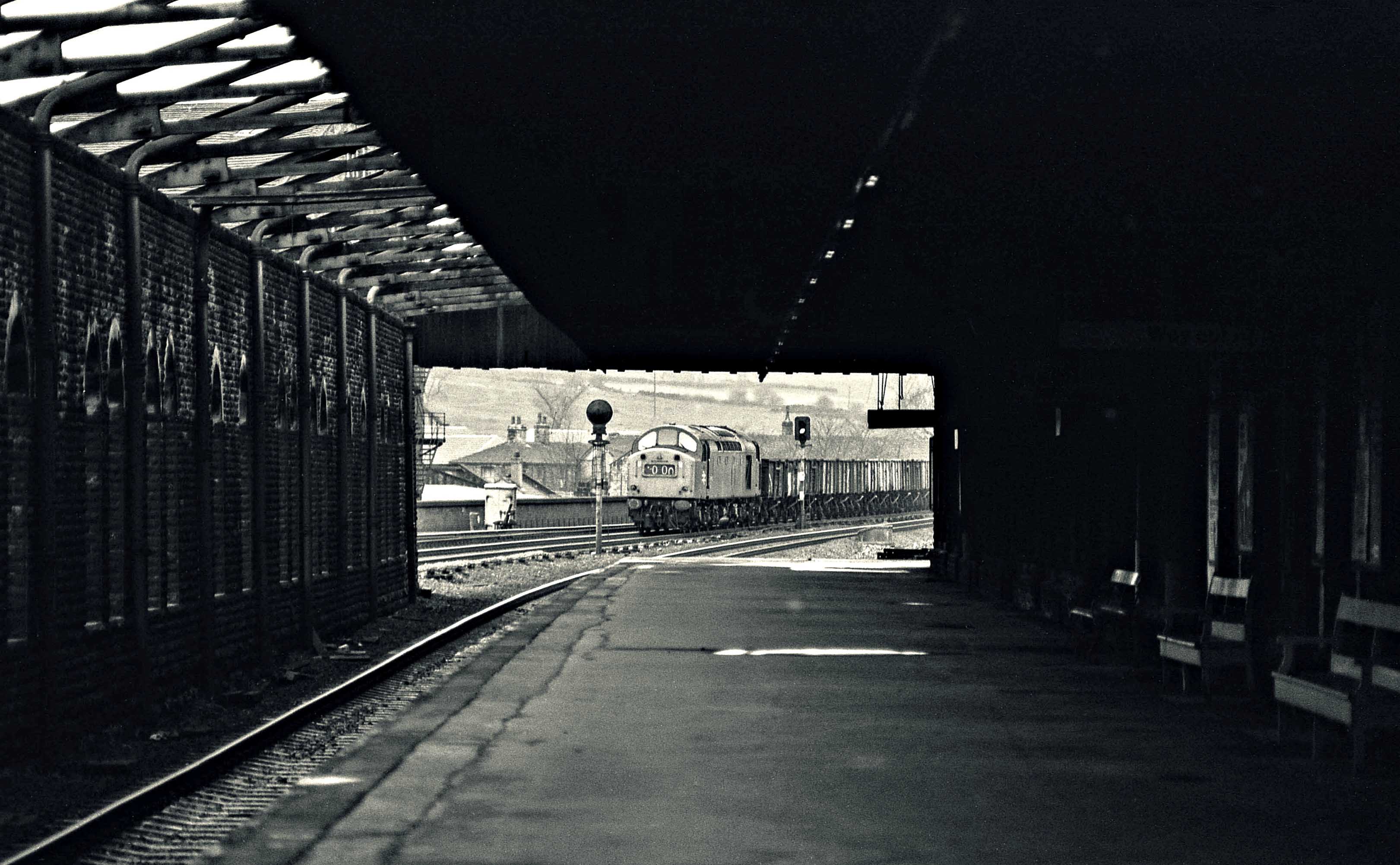 From the gloomy, spartan interior that defined Mirfield station in the 1970s a brief ray of hope for the railway photographer appears in the form of class 40 no. 40156 heading a passing freight. 12th April 1977.

An overnight photography session on Crewe station captures class 47 no. 47539 awaiting signals. It was raining heavily and I almost didn’t bother venturing out from shelter to captures this – it took a 23s exposure to land it, and me and the camera gear got a soaking. It was worth it! 21st January 1978. 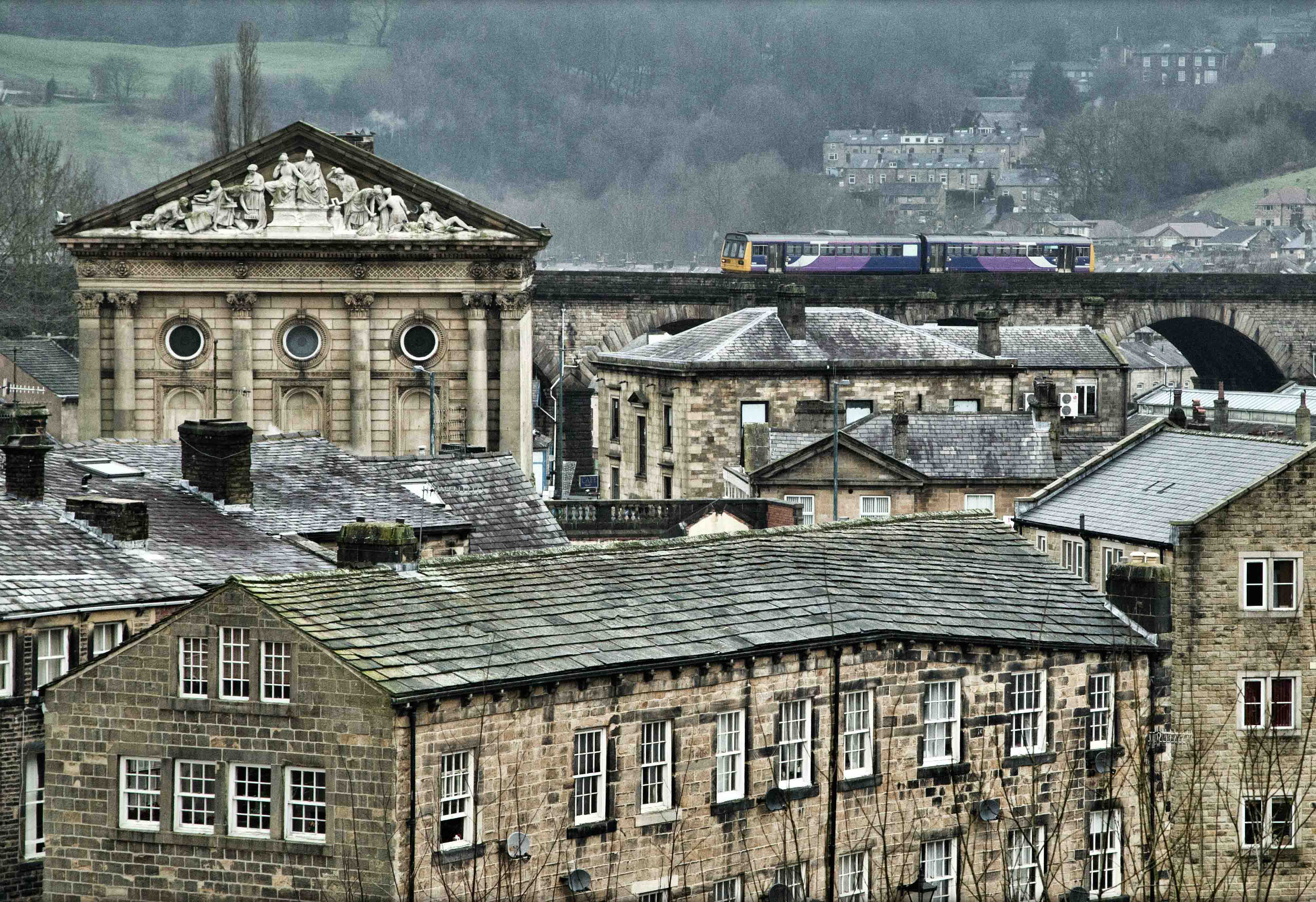 The driver of Northern’s 2.20pm Blackburn – Wigan service is getting a grandstand view of the characterful Todmorden rooftops as the train crosses the viaduct and approaches the station. The splendid building taking centre stage is Todmorden Town Hall. 17th January 2017. 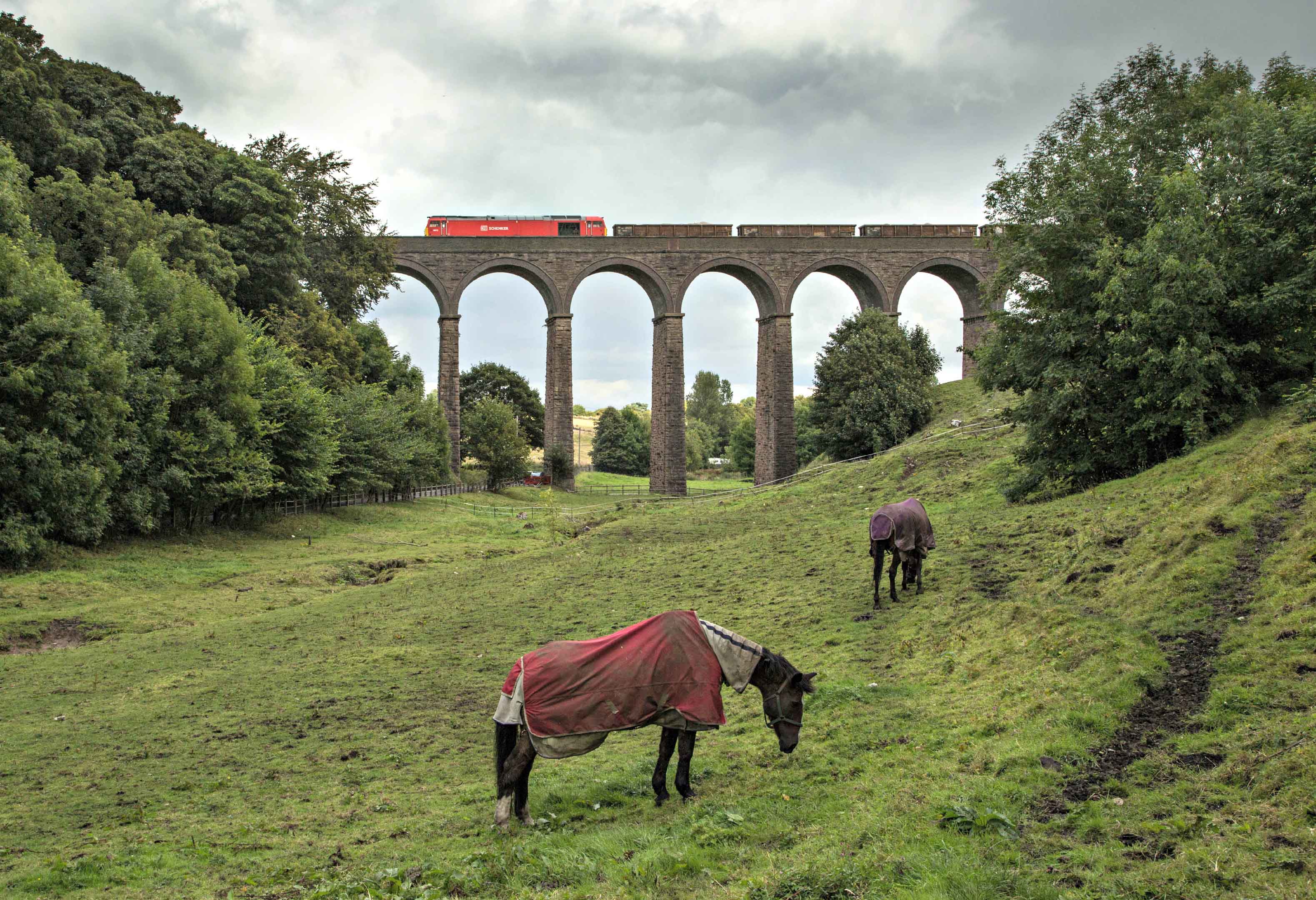 With rather more horsepower than our two friends, ‘Tug’ 60015 rolls effortlessly over Duke’s Drive viaduct in Buxton with a limestone train from Dowlow Quarry destined for Manchester. 18th August 2014. 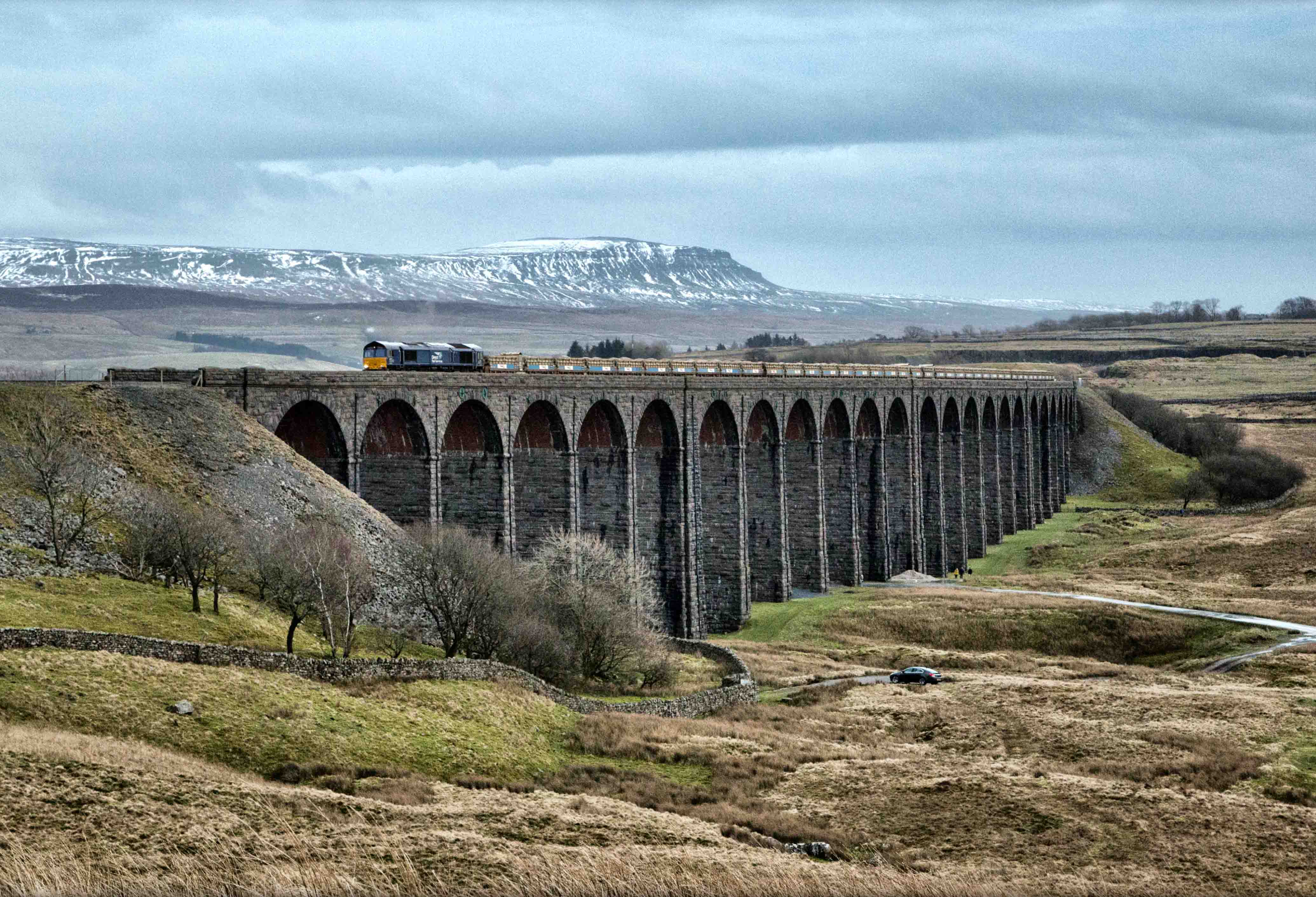 A light covering of snow on the summit of Penyghent forms the backdrop to ‘Shed’ 66302 riding high over Ribblehead viaduct hauling a ballast train from Mountsorrel to Carlisle Yard. 16th February 2018. 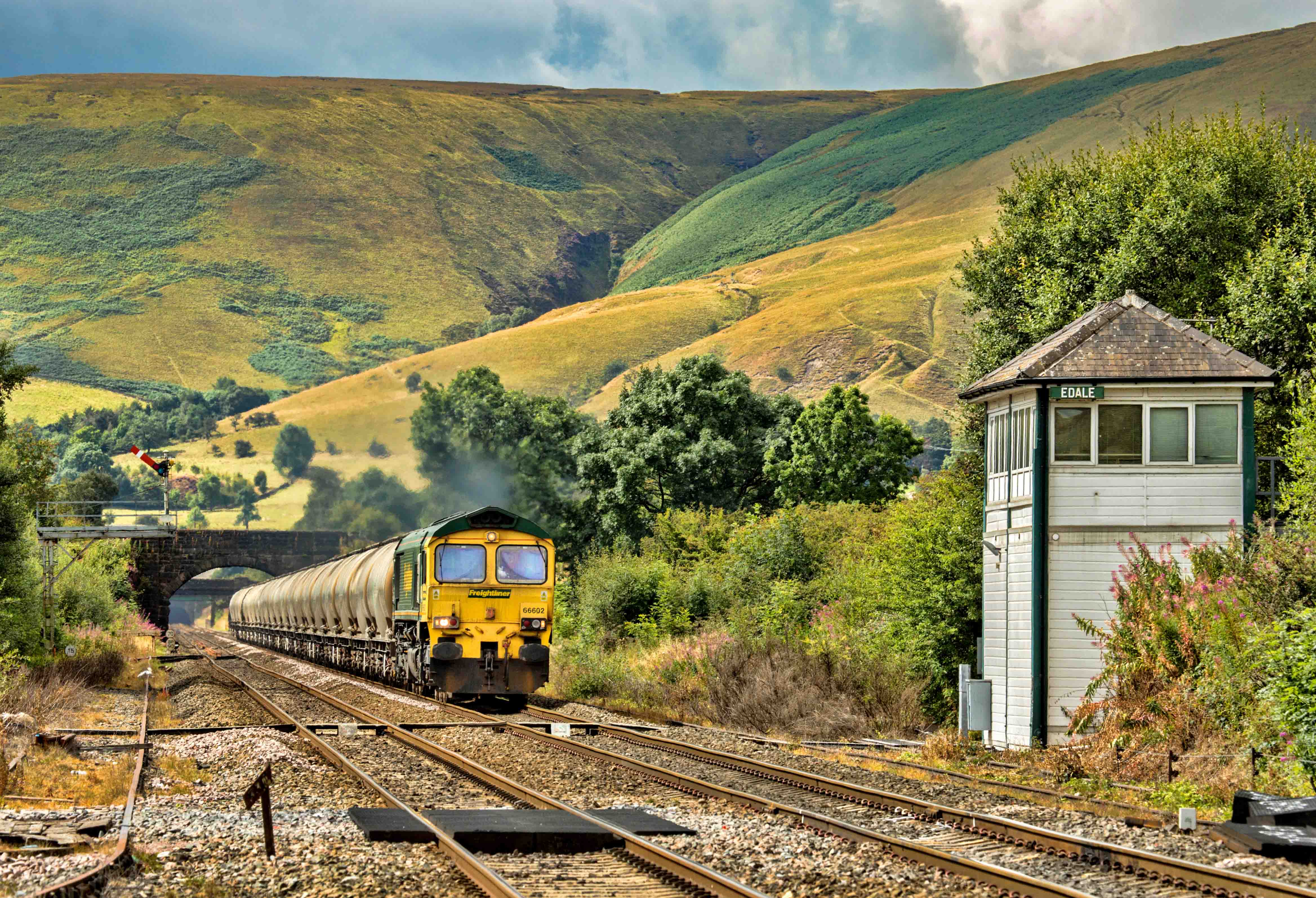 The cover of my book and a personal favourite sees ‘Shed’ 66602 approaching Edale in the Peak District National Park with the lunchtime Tunstead Quarry – West Thurrock cement train. The village is the start of the 270 mile Pennine Way footpath along the backbone of England and the scenery here is up with the best the UK has to offer. 22nd August 2014

The Pennines: Trains in the Landscape can be purchased from Amberley Books: https://www.amberley-books.com/the-pennines.html