With the magic 150 years mark coming and going for the small but popular 'Terrier' Locomotives this year, many railfans will be keen to catch a glimpse of those examples that remain. Indeed 10 Terriers were saved for preservation and a number of these still run on heritage railways in the South of England, where they would have originally operated by the London, Brighton and South Coast Railway (LB&SCR) and later the Southern Railway.

Below we list the locations of each of the 10 remaining. 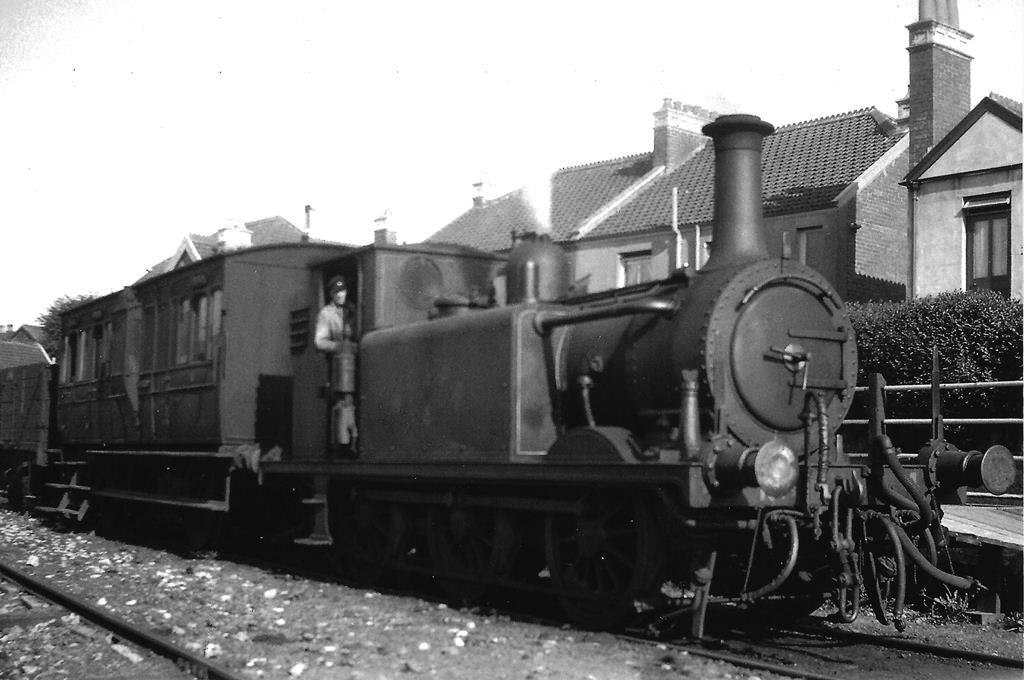 The Weston, Clevedon and Portishead Light Railway's former 'Terrier' 0-6-0T number 4 at the Ashcombe Road terminus in Weston-super-Mare, Somerset. It was built in 1875 but sadly scrapped in 1948 and is not one of the ten survivors. Public Domain image, part of the Geoff Sheppard Collection.

Since being rolled out back in 1878, Brighton has been seen at some curious places including a trip to Paris for demonstration runs shortly after completion. But after 40 years on the Isle of Wight and the majority of its mainland service in Hampshire, Kent and East Sussex, withdrawl and preservation saw W11, since renamed Newport in 1923, head to Pwllheli Holiday Camp in 1963 where it remained static for 10 years under the ownership of Sir Billy Butlin. It was not until 1989 that W11 was first put back into steam, courtesy of the Isle of Wight Steam Railway who had taken it from Butlin's in 1976. The resteaming took place where it had spent a considerable part of its life. Today Newport remains in service on the Isle of Wight Steam Railway but is planned for an appearance at the Bluebell Railway in 2022.

Joining Newport on the Isle of Wight is W8 Freshwater, originally named Newington upon completion in January 1877. South London was its original home, being allocated to Battersea, before a period of use down in East Devon and Dorset began under contract between the LB&SCR and the LSWR. Branch lines in this area to Exmouth, Budleigh Salterton, Sidmouth and Lyme Regis, were short and in the case of the latter, steep and sharp in its ascent to Combpyne from the town of Axminster. Terriers were ideal for this working and 46 (as no.734) operated in this area until 1913. From then, it too became an Isle of Wight loco until 1949. Since then it saw yet more use on the mainland in and around Hampshire but in preservation was taken back to the island where it was restored to steam initially in 1981 and most recently in 2009. It is currently undergoing its latest overhaul. 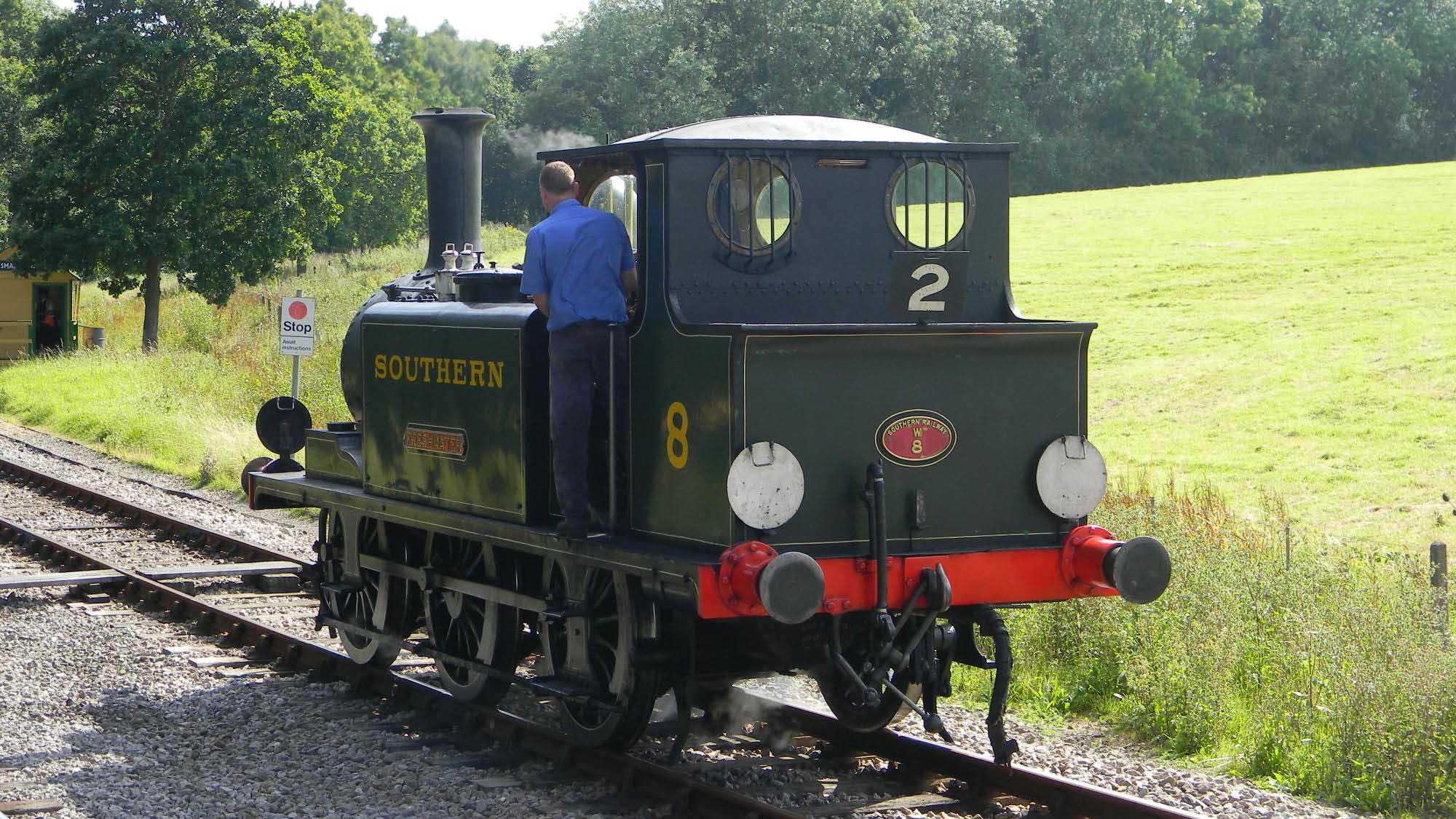 W8 Freshwater running round its train at Smallbrook Junction Railway Station on the Isle of Wight Steam Railway in 2011. Photo by Joe Rogers.

Sutton, once Fishbourne, originally Whitechapel, like other A1 members was put into use along both the Hayling Island branch line and worked on the Isle of Wight at various times between its construction in 1876 and withdrawal in 1963. Its post-preservation service took place on the mainland at the Kent & East Sussex Railway between 1974 and the 1990s before being sent over to the Spa Valley Railway in 2004. Since then work has slowly been done to restore the locomotive to running order and though it was originally hoped that this would be done in time for the 150th anniversary, 2023 offers a more realistic prospect for completion.

54 Waddon remains the furthest flung A1 Terrier, residing at the Canadian Railway Museum in Saint-Constant, Quebec after it was gifted to the CRHA by British Rail. In service the loco ran on the LB&SCR as well as the Sheppey Light Railway, continuing the theme of this Class being used on island branch lines. Today the locomotive is still on static display in Canada though recent rumour suggested that the museum might be looking to dispose of Waddon in the future. Only time will tell if this is the case.

For fans of the Rev W Awdry series Thomas the Tank Engine, Stepney is a familiar character having been featured in both the popular TV series and The Railway Series in book 18: Stepney the "Bluebell" Engine. As a result the actual locomotive, built in 1875, is now a popular attraction as a static display at the Bluebell Railway but in service worked down in Hampshire at Fratton and at the Woolmer Military Railway. 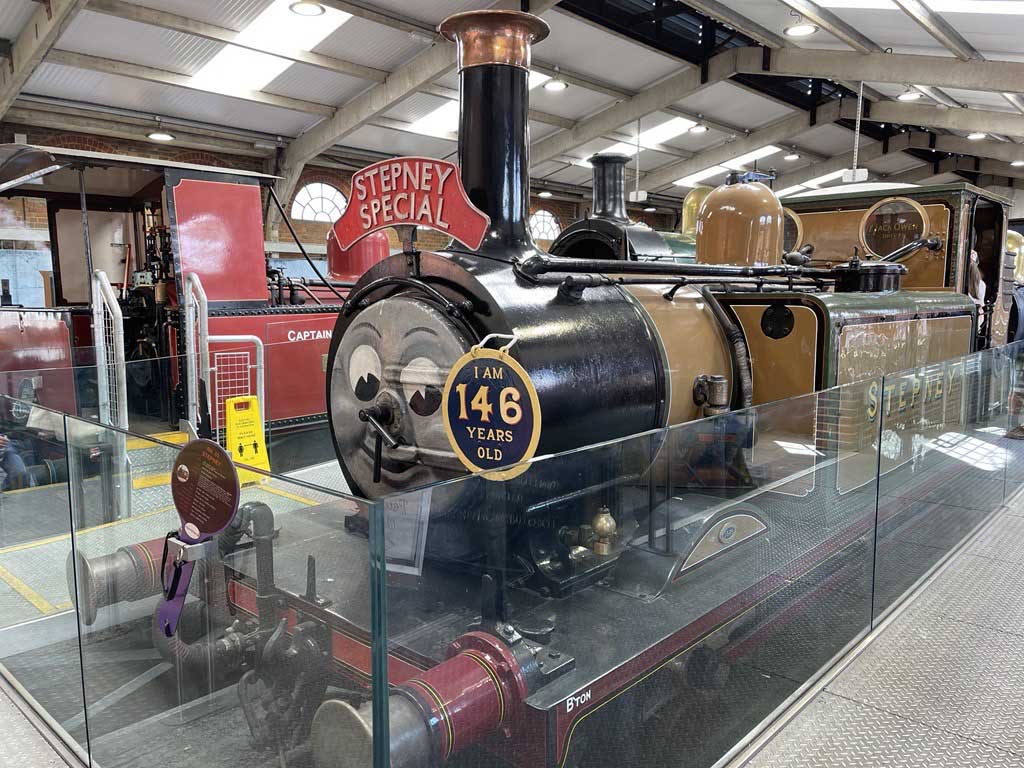 55 'Stepney', photographed at the Bluebell Railway in 2021. Though the Class reaches its 150 years this year, 'Stepney' was built later and therefore is not 150 years old. Photograph by Jamie Ringwood.

62 Martello's service duties from 1875 largely follow that of others in its class, both on the suburbs of London and into Hampshire and on branch lines on the south coast, such as the Hayling Island Line but like W8 Freshwater, also visited Devon and Dorset by working the Lyme Regis branch line which connected to the mainline at Axminster. Another connection to a classmate was its move to a Butlin's site like W11 Newport but this time in Ayr, Scotland, for static display. From 1971 it has been a feature of Bressingham Steam and Gardens with the occasional visit elsewhere, such as the Kent & East Sussex Railway. Today B662 remains in service at Bressingham. 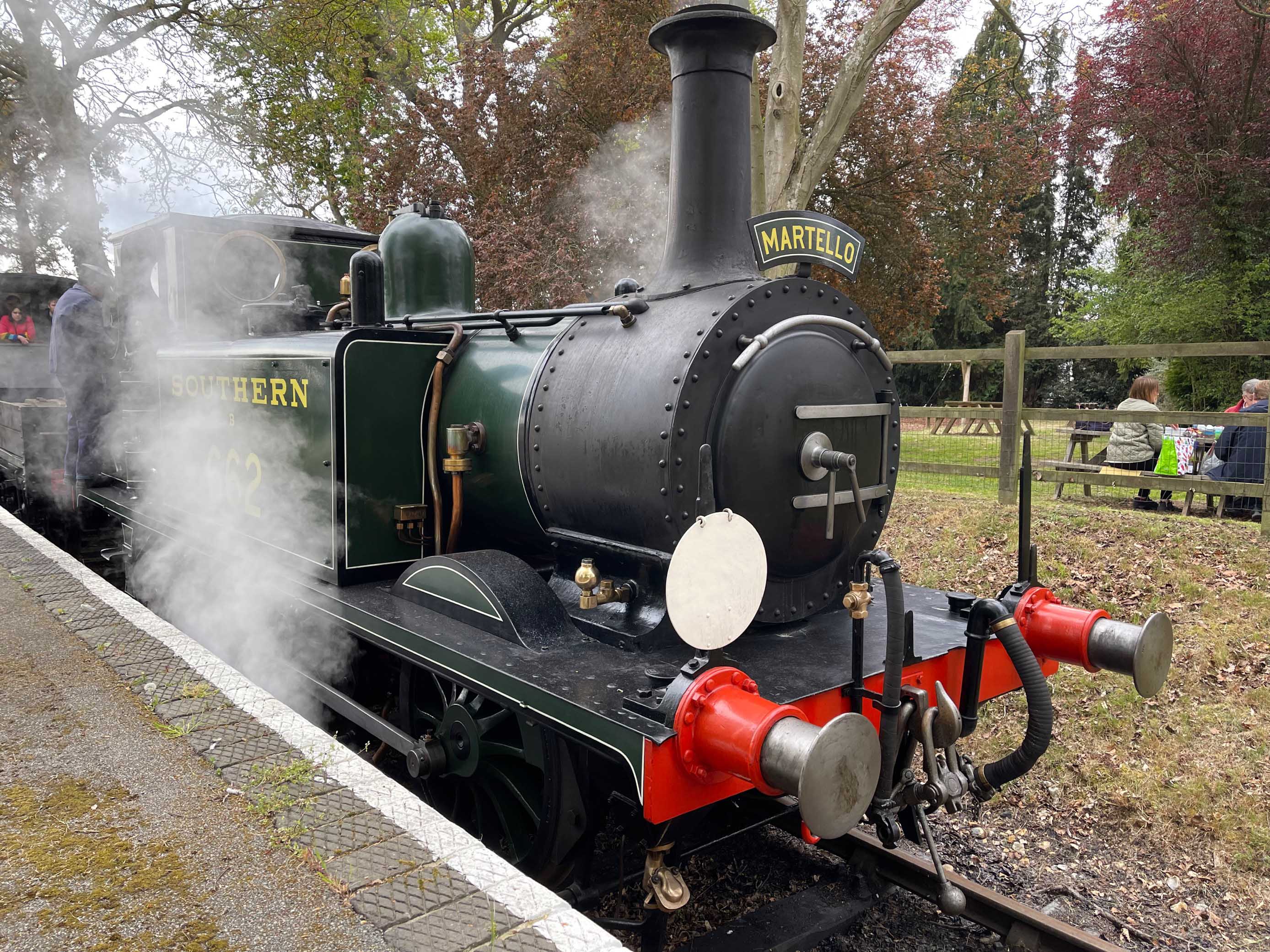 Despite other Terriers having earlier numbers, 70 Poplar is thought to have been the first class member to be ordered and built back in 1872 - 150 years ago. After the turn of the 20th century, the locomotive was renamed Bodiam and worked along what is now the Kent & East Sussex Railway until its later life when it featured (as did others) on the Hayling Island line. It was then withdrawn in 1963. Since then, Poplar has remained 'at home' in preservation but made a special visit to London's Docklands Light Railway earlier this year. It also featured at the Bluebell Railway for the 150th anniversary celebration.

Joining Stepney at the Bluebell Railway is 72 Fenchurch but though Stepney is confined to static display, Fenchurch has seen running as recently as 2011. The intention, as with other Terriers, was to have its latest overhaul completed ready for 2022 so that it could join planned visitors Newport and Poplar for the 150th anniversary celebration but a lack of parts meant that this wasn't able to happen. Before preservation, Newhaven was the home of Fenchurch and under its BR number 32636 was for a time the oldest locomotive running on British Railways. 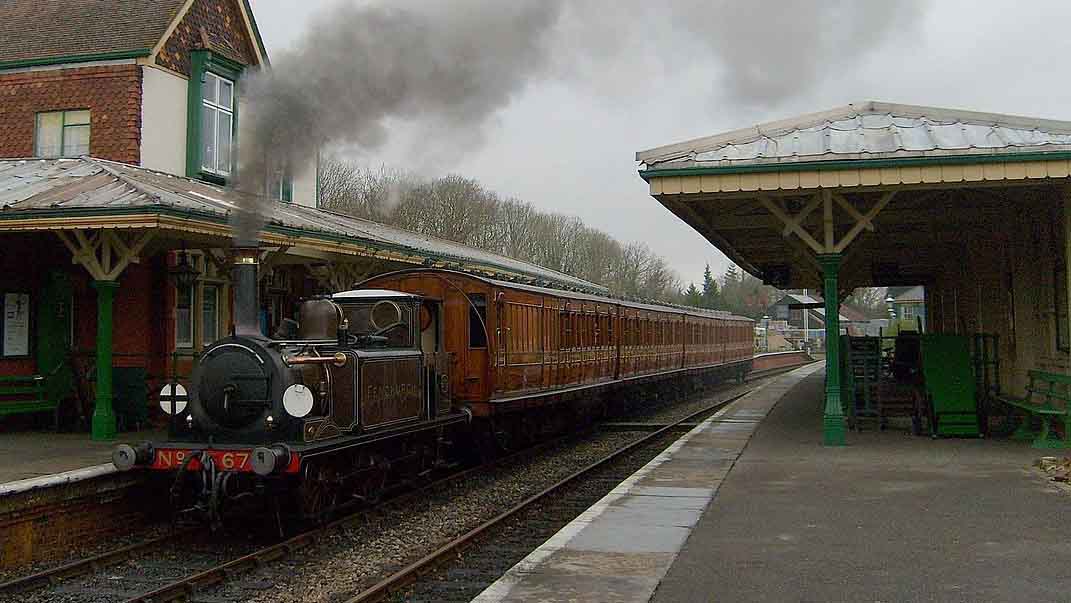 The last of the Terriers left the factory in 1880, some 8 years after the first were built. Knowle was one such locomotive to be completed in this final year. As with other Terriers, the Isle of Wight became the home of this locomotive, which for a time was renamed Bembridge, before it went to join the other regular haunts of the class on the mainland at Newhaven, the Kent & East Sussex Railway and the Hayling Island branch. Knowle was yet another example to eventually make its way to Butlin's, this time at Minehead in Somerset which forms the end of the West Somerset Railway where it has since guested in preservation. Though it has appeared at a number of other heritage railways, Knowle remains on the Kent & East Sussex Railway.

Also one of the later 1880-built Terriers, Boxhill spent much time as a shunting locomotive at the birthplace of the class: Brighton. For a time in preservation, Boxhill joined Stepney at the Bluebell Railway but after ventured up north on static display in Scotland and eventually the National Railway Museum in York. As a result it is seen by many of the museum's national and internationl visitors along with other famous steam and diesel locomotives.

Read more about the 150th anniversary of the Terrier Locomotive over on the offical Terrier 150 website, or via the Terrier Trust. You can also find out more information about specific locomotives from each of the heritage railways where they feature: