What is the most famous diesel locomotive in the history of railroading? Arguably, the classic Electro-Motive “F-unit” can lay claim to the title.

The Electro-Motive “F-unit”: Born in the autumn of 1939, it would be produced, in eight different models, until 1960 and would number more than 7,500 strong. More than any other locomotive, it would be the force that “dieselized” the railroads of North America. Constructed by the Electro-Motive Division of General Motors at La Grange, Illinois and by General Motors Diesel at London, Ontario, Canada, fabulous F-units would serve in every corner of the United States, Canada, Mexico, and elsewhere around the globe.

Designed to haul tonnage (“F” stood for “freight”), the Electro-Motive F-unit proved equally adept at conveying passengers, and could be found on the point of many of North America’s greatest passenger trains, such as the Super Chief, Empire Builder, California Zephyr, and Canadian.

Once ubiquitous, the F-unit, as it approached its retirement and became rare in everyday railroading, became a cherished discovery for a new generation of railfans and is today the crown jewel of many railroad museums and tourist lines. And how many enthusiasts can say that in youth they did not have a Christmas tree model railroad with a classic EMD F-unit, more often than not in Santa Fe’s timeless and magnificent red-and-silver “Warbonnet” livery?

It was under a gunmetal gray sky on a day in November 1939 that the locomotive which would forever change railroading rolled out at Electro-Motive’s La Grange plant. The newcomer, liveried in olive green and cream, was Electro-Motive FT demonstrator 103, and it was the locomotive that delivered proof positive that diesels could tote North America’s enormous volumes of freight tonnage and do so faster, more efficiently, and at lower cost than even the finest examples of 20th century steam locomotion. Indeed, years later renowned Trains Magazine Editor David P. Morgan would label FT 103 as “The diesel that did it.”

Electro-Motive, founded in Cleveland, Ohio, in 1922 and acquired by General Motors (along with diesel powerplant supplier Winton Engine Company) in 1930, had by the mid-1930s already become a force in producing diesel-electric yard switchers and passenger locomotives. Electro-Motive’s plant at La Grange (about 15 miles southwest of Chicago) was built in 1935. But the “big market” – that for road freight locomotives – remained the bastion of steam power.

Richard M. Dilworth, Electro-Motive’s legendary Chief Engineer, went to work to change that. On Dilworth’s drafting tables took form a cab-and-booster design with the then-new, but soon to be renowned, Electro-Motive 567-series V-16 diesel powerplant at its heart. In each unit, the 567-series powerplant would provide 1,350 horsepower. The new design, riding on a pair of two-axle trucks and dressed in a streamlined carbody that was a pug-nosed variation of Electro-Motive’s elegant “E” passenger units, was envisioned as being able to operate in two-, three-, or four-unit sets, the latter (an A-B-B-A lash-up) capable of delivering 5,400 horsepower and competing head-on with the biggest of steam.

But how to prove it? The answer came in the form of a demonstration tour by Electro-Motive 103 that lasted from November 1939 through October 1940, stretched across 35 states, hauled tonnage (and some passengers) for 20 different railroads, and ran up a total of 83,764 miles. Across those 83,000 miles, FT 103 took on the toughest territory and heaviest tonnage the railroads had to offer, working on the Baltimore & Ohio’s Allegheny grades over the B&O’s historic “West End,” Rio Grande’s Moffat Tunnel mainline, Western Pacific’s Feather River Canyon, Boston & Maine’s Hoosac line, Great Northern’s Marias Pass, Southern’s “Rathole,” and Santa Fe’s Tehachapi Loop route, to name just a few. Following its service as a demonstrator, Electro-Motive 103 went on to serve a long career for the Southern Railway.

Produced throughout World War II, the FT in production form would garner orders from 23 U.S. railroads, and its final production count came in at 1,096 units. Following the war, EMD briefly produced a transitional, 1,350-horsepower F2 (104 units built), then debuted the capable 1,500-horsepower F3, of which 1,807 examples were built through early 1949. Next in line came the most successful “F-unit” of them all – the marvelous F7. From February 1949 to December 1953, 3,858 F7s were constructed for 55 buyers that represented a veritable “who’s who” of U.S., Canadian, and Mexican railroads. An elongated version of the F7 cab unit – the FP7 – was also constructed (376 units), with its extra length allowing the locomotive to carry more water for the steam generator while serving in passenger service.

Eventually, it was only the railroad’s increasing preference for versatile “road-switcher” designs that brought an end to the remarkable reign of the Electro-Motive F-unit (indeed, the EMD “Geep” was, mechanically, largely the same as an F-unit, but in road-switcher dress). In 1954, EMD transitioned to the 1,750-horsepower F9 and sold only 208 units in North America (while 79 FP9s were also constructed for service in Canada and Mexico) through 1959

In a somewhat remarkable twist, it was left to the New Haven – one of the few major North American railroads not to roster standard F-units – to close the book on production of the classic F-unit, as the NNH&H, in 1957-1960, received 60 of the distinctive dual-power FL9 diesels, many of which carried on in regular commuter service for successor Metro-North until 2009.

Today, 81 years after FT 103’s debut, there remain a small handful of F-units in regular service on short lines such as California’s Fillmore & Western and West Virginia’s Durbin & Greenbrier Valley. But for railfans, the marvelous discovery of Electro-Motive F-units still awaits, from Maine to California (or shall when the Covid-19 pandemic subsides), at scores of railroad museums and tourist lines. Many of the remaining F-units are operational and beautifully restored in original liveries, and among the survivors is landmark FT 103, preserved at the St. Louis Museum of Transportation. The memorable experience of the fabulous Electro-Motive F-unit, arguably railroading’s most famous diesel, is surely not to be missed! 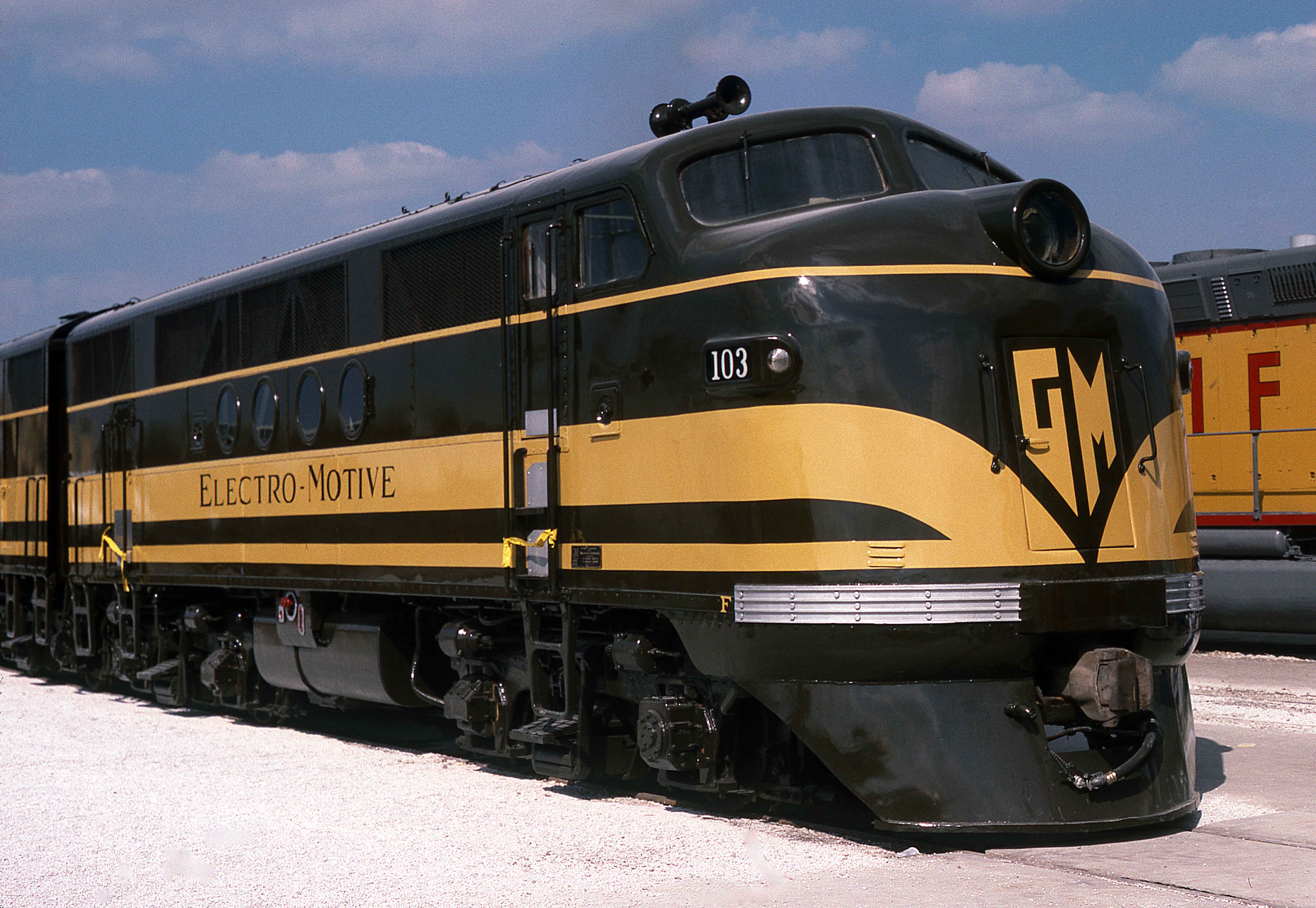 “The diesel that did it.” Electro-Motive FT 103 made its debut at La Grange, Illinois, in November 1939, and with its historic 83,000-mile U.S. demonstration tour in 1939-1940 forever changed railroading. Depicted as the guest of honor at Electro-Motive’s 50th Anniversary celebration at La Grange in 1972, the 1,350-horsepower landmark locomotive today is preserved at the St. Louis Museum of Transportation. Photo: Gary Dolzall collection. 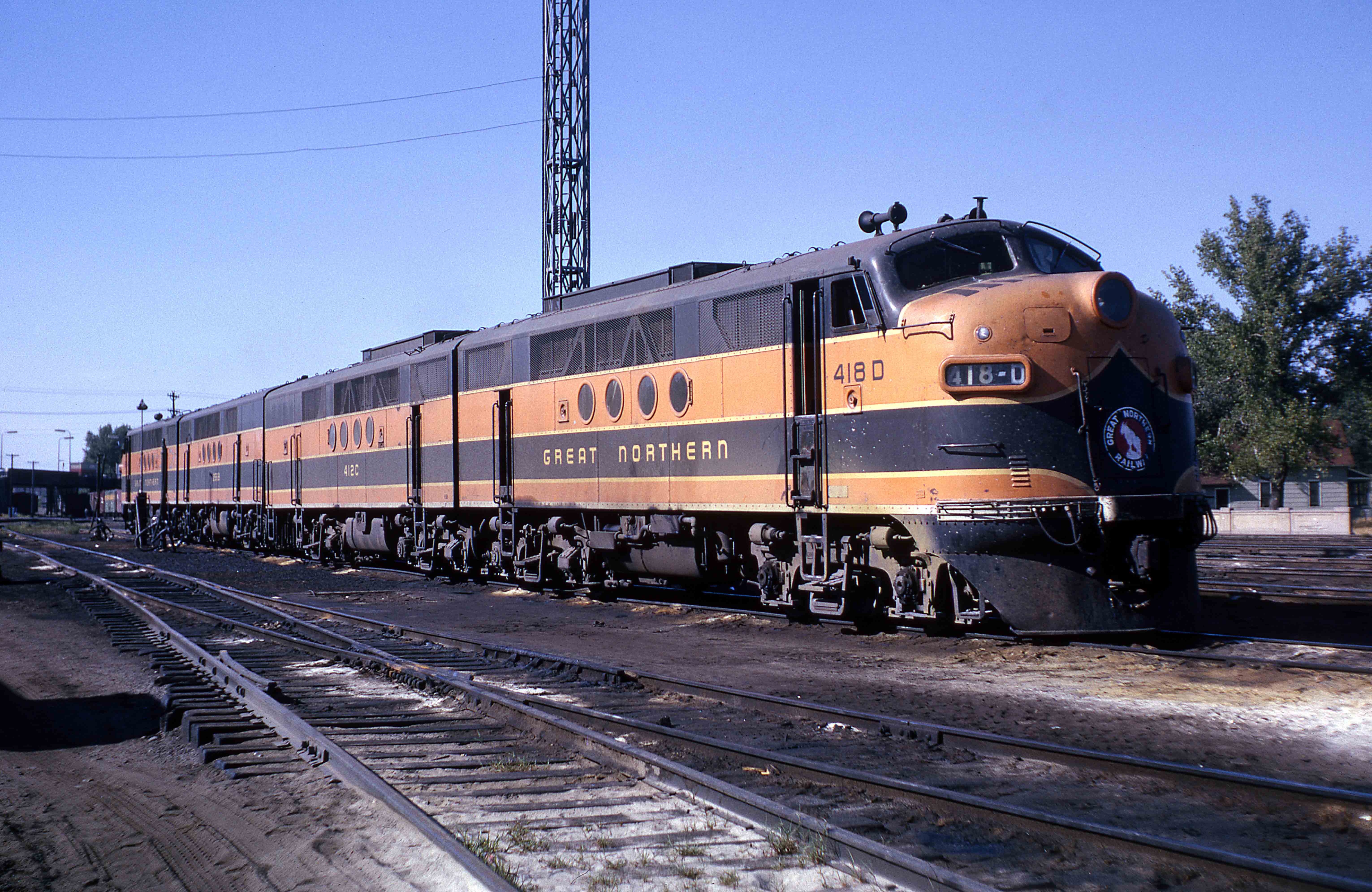 Throughout World War II, Electro-Motive churned out more than 1,000 FTs which went to work for 23 U.S. railroads. Great Northern 418-D and kin, awaiting duty at Minneapolis Junction, Minnesota, in 1964, were among 96 FTs on the GN. The most notable “spotting” feature for the FT was its four side portholes along with, for units equipped with dynamic brakes, a boxy roof housing. Photo: Tom Start; Gary Dolzall collection. 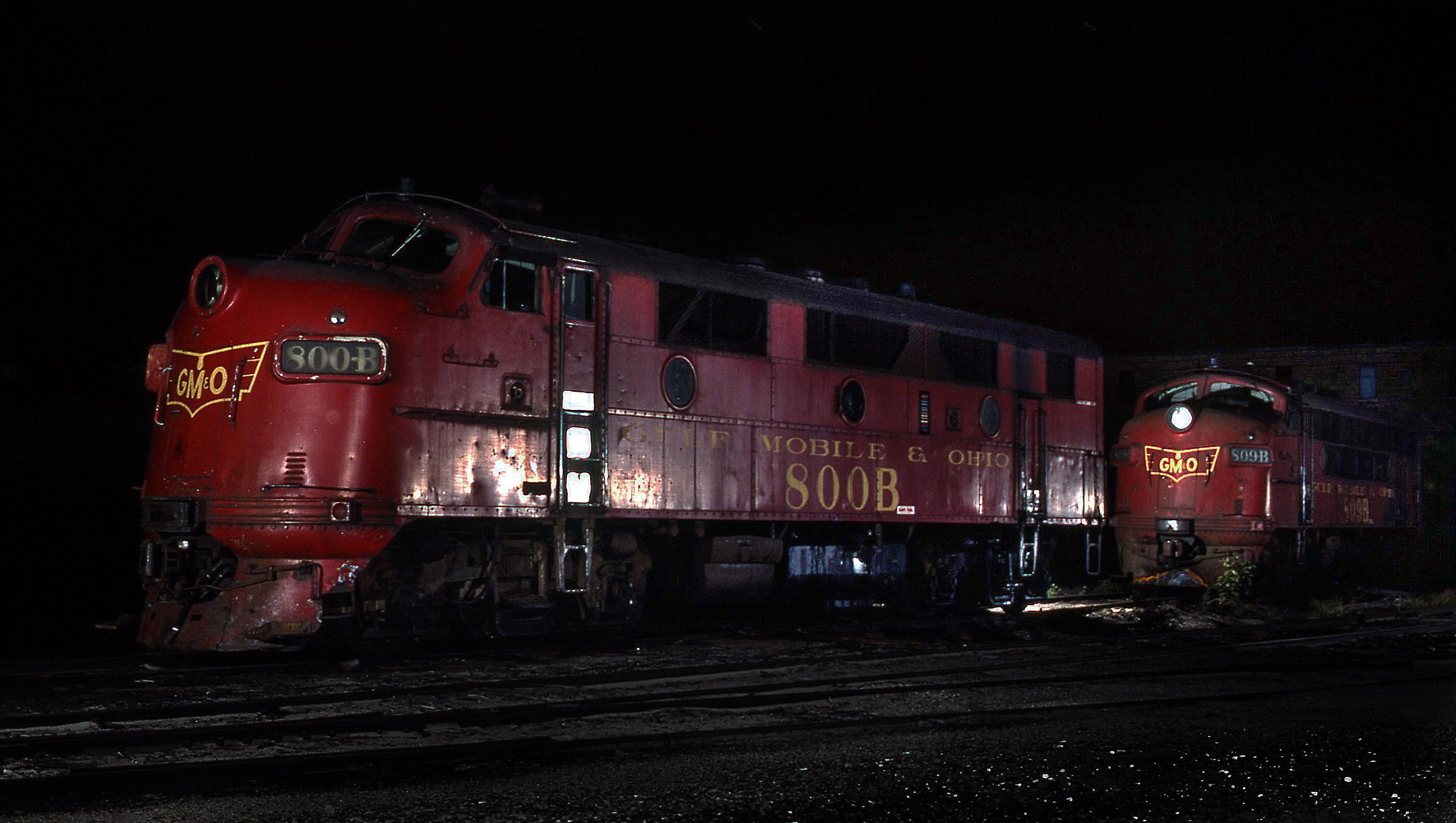 With the F3, introduced in 1945, the horsepower rating of the Electro-Motive F-unit was upped to 1,500-horsepower. The Gulf, Mobile & Ohio (which was merged with Illinois Central in 1972) was among the last major operators of the F3, and on a November night in 1976, F3 800B and sister 809B, still wearing GM&O colors, huddled at the railroad’s Bloomington (Illinois) shops. Photo by Gary Dolzall. 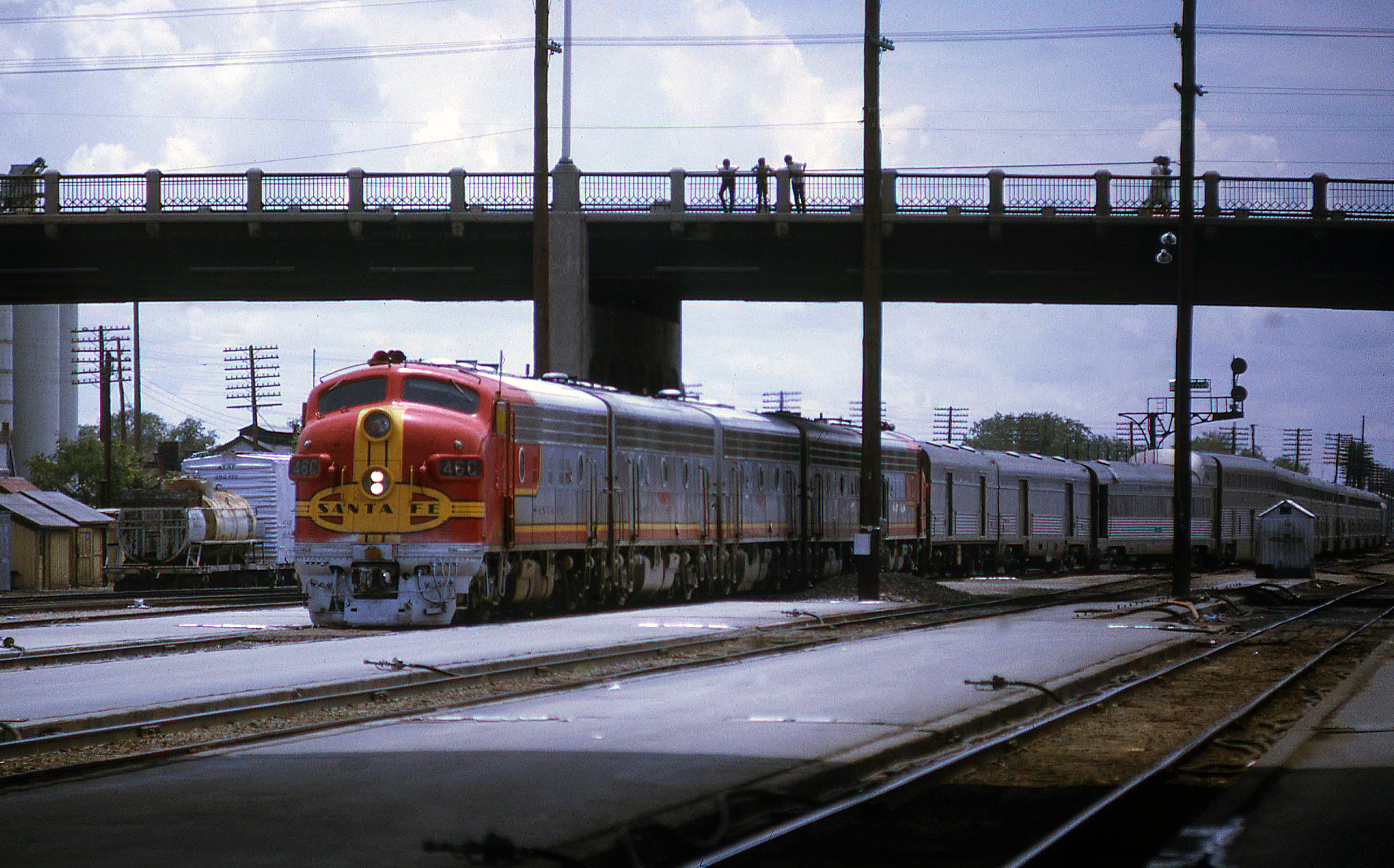 The 1,500-horsepower EMD F7, produced from 1949 through 1953, was the most successful of all the remarkable F-unit series, with 3,858 units constructed for 55 buyers. Among those buyers, none dressed the F7s in a more striking and memorable livery than the Santa Fe with its “Warbonnet” scheme. Lucky indeed are the three young men bending over the overhead bridge railing to witness a five-unit set of Santa Fe F-units arrive at Albuquerque, New Mexico, in 1968 with AT&SF’s magnificent hi-level El Capitan, the coach sister of the fabled Super Chief. Photo by Gary Dolzall. 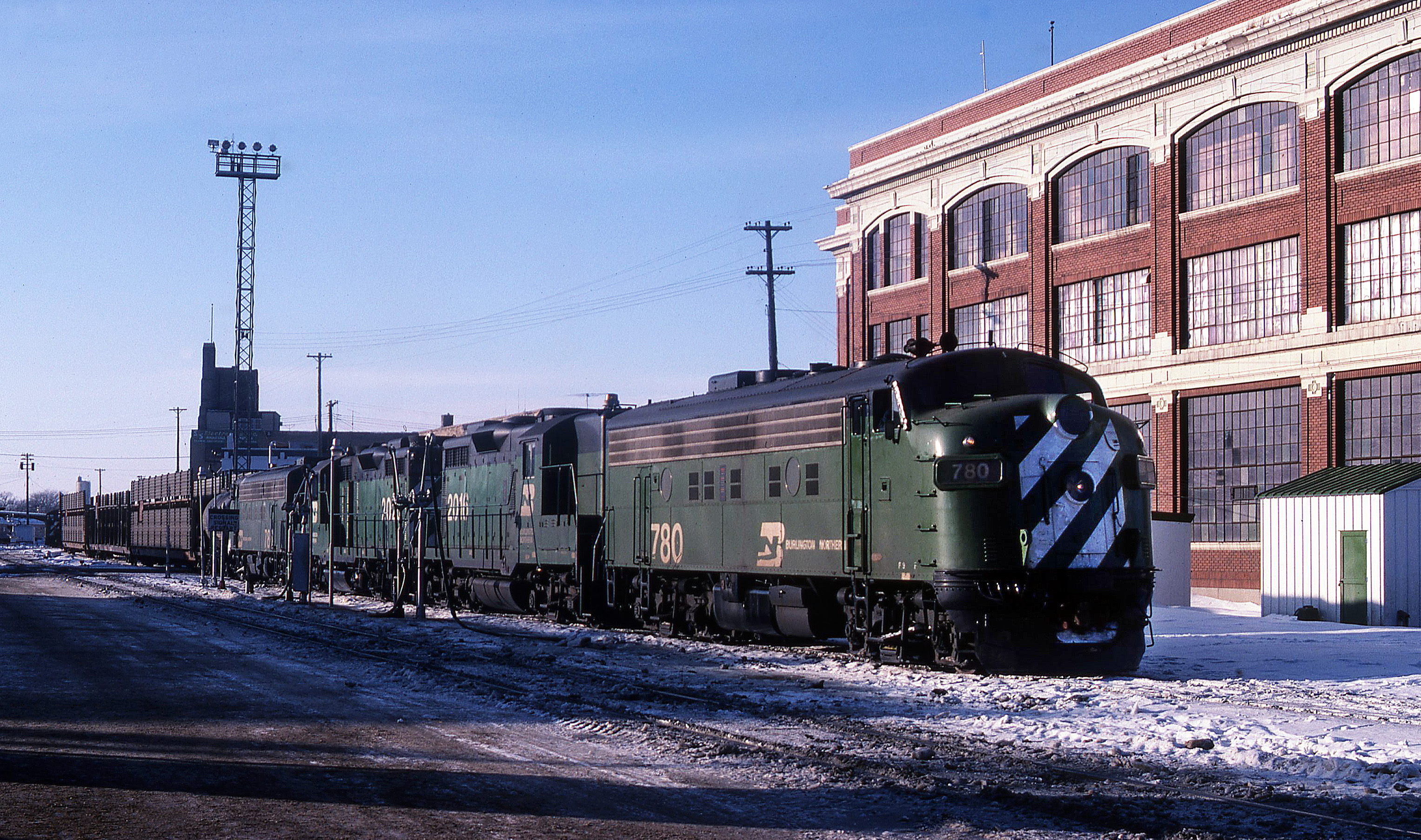 It is New Year’s Day 1978 at Fargo, North Dakota, and the Fahrenheit temperature is well below zero as Burlington Northern F9 780 and a fascinating lash-up of BN F-units and GP20s totes tonnage. Burlington Northern 780 began life in 1949 as an F7 serving the Northern Pacific and was remanufactured into a 1,750-horesepower F9 in 1956. Photo by Gary Dolzall. 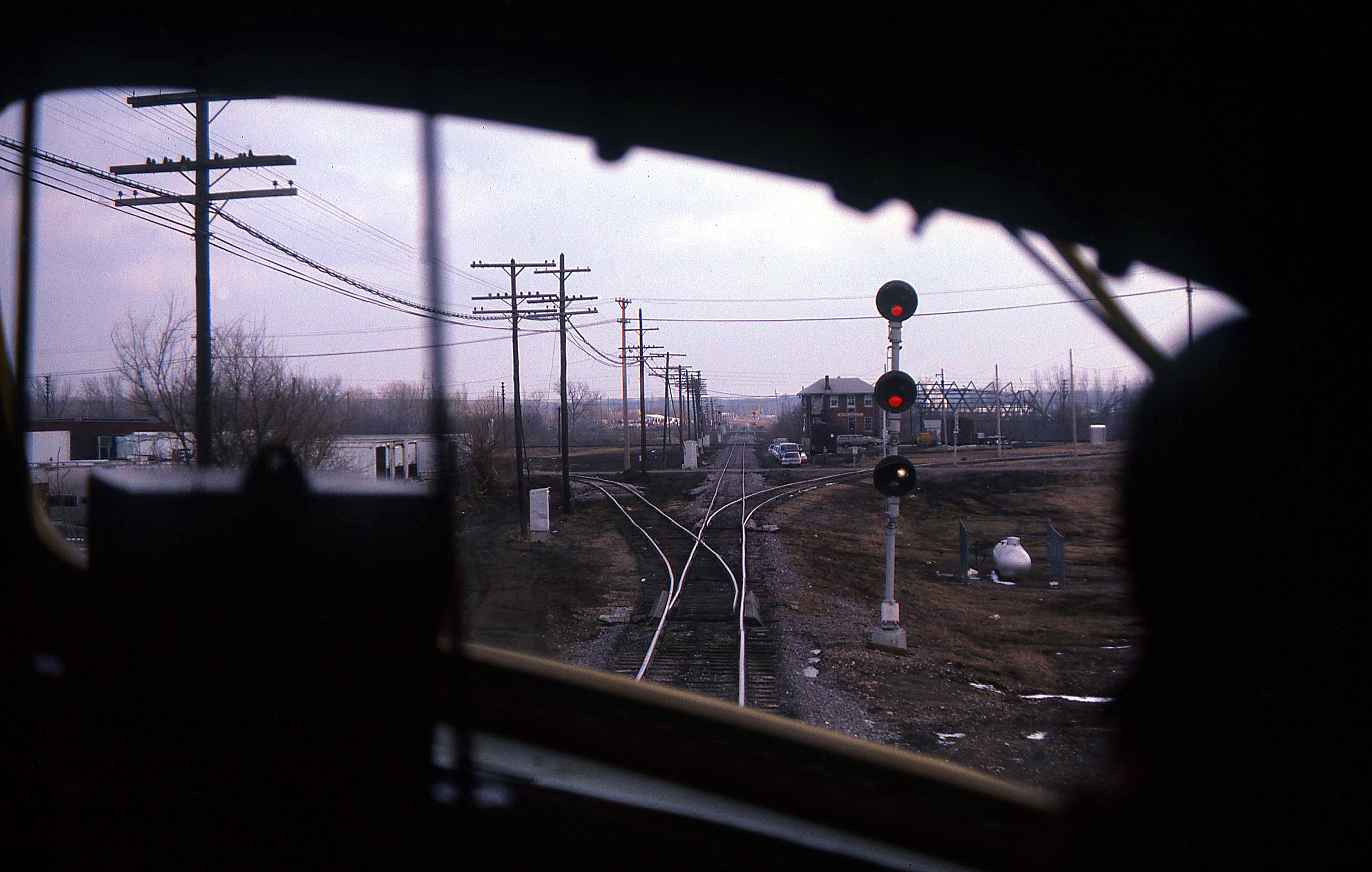 View from the cab: For decades, railroad engineers climbed aboard able F-units to peer through the distinctive curved windshield of the famous EMDs. The author was aboard Chicago & North Western F7 401 as it headed a 1984 C&NW executive inspection train over the C&NW’s Spine Line in Minnesota and Iowa (above). Coming to a stop at Short Line Junction in Des Moines, Iowa (below), stylish C&NW 401 had spent much of its career in Chicago commuter duty. Both photos by Gary Dolzall. 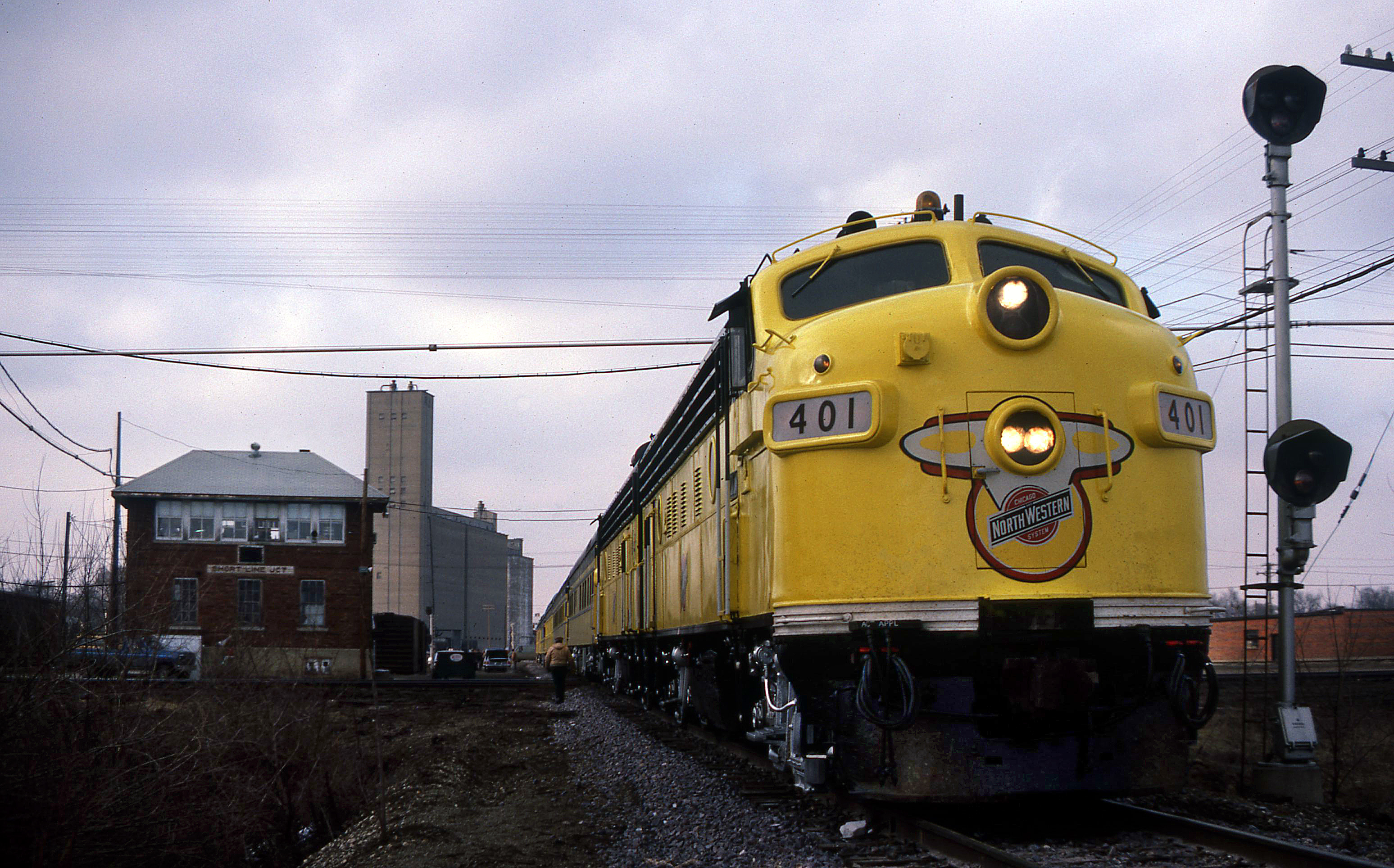 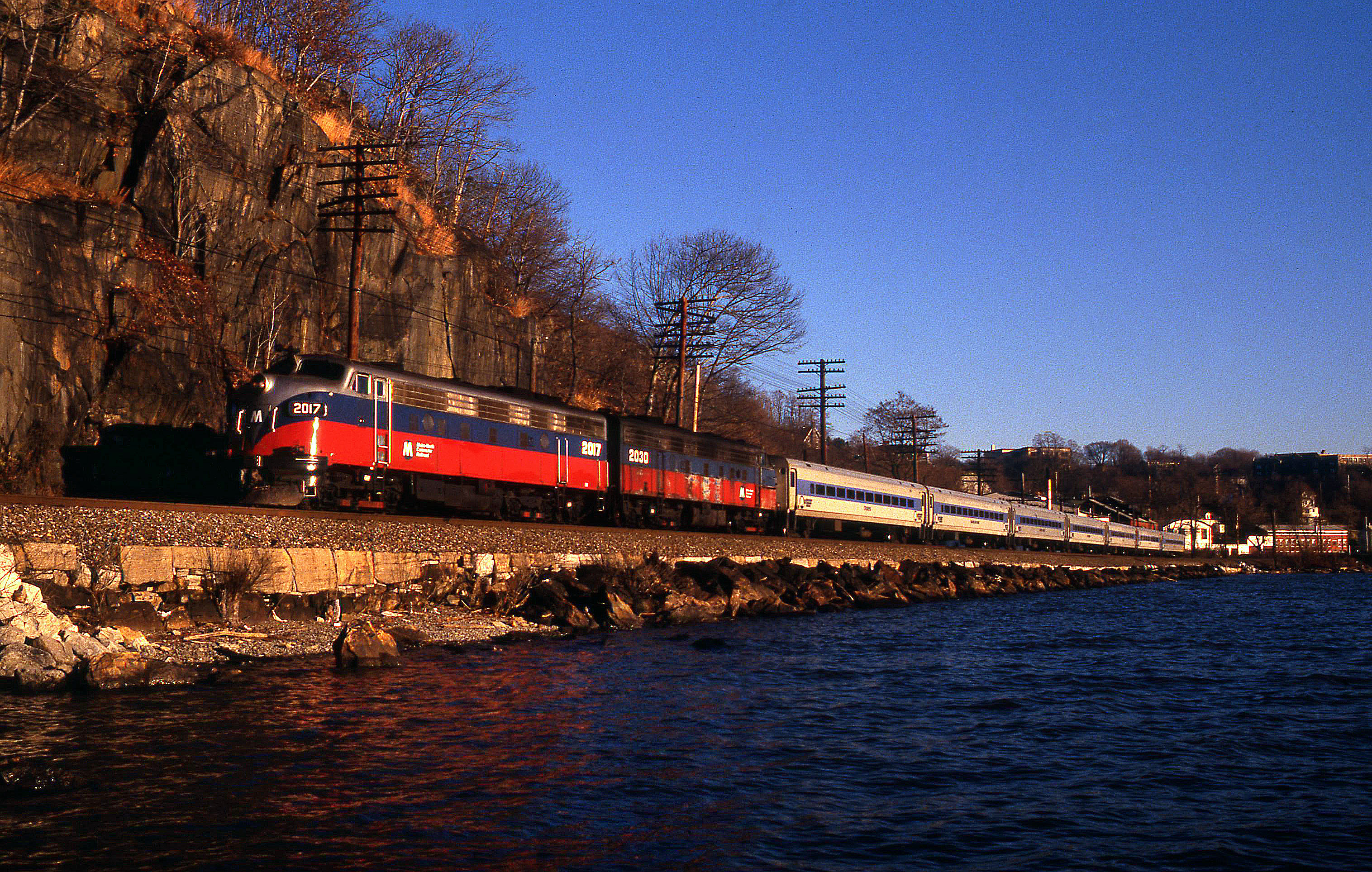 Last of the line. The final rendition of the fabled EMD F-unit was New Haven’s distinctive dual-power FL9. NYNH&H acquired 60 of the diesels in 1957-60 and the units went on to serve Penn Central, Conrail, Amtrak, and Metro-North. Amid the golden late afternoon light of a crisp winter day along the Hudson River at Peekskill, New York, a duo of MNCR FL9s are leading a northbound commuter train. Metro-North operated its last FL9s in 2009. Photo by Gary Dolzall.