The LSWR, as its name suggests, built railways from the London terminus of Waterloo to the south west of England at Portsmouth, Southampton and Bournemouth. They also sought to compete with the Great Western with their own route to Exeter and from there they inhabited mostly the largely sparsely inhabited areas of north and mid-Devon and North Cornwall.

The up and coming, at least at the turn of the 19th century, transatlantic ocean liner terminal of Southampton was serviced by express boat trains and these too competed with the GWR’s version which had been established at Plymouth. The whole point was to land passengers and mail the quickest; given a departure from New York. The GWR was the nearer by sea but further by rail from London. However the GWR had the advantage in that it took longer to do the extra sea distance to Southampton than it took the GWR to do the extra 100 miles or so by rail. The GWR 4-4-0 locomotive ‘City of Truro’ claimed the first 100 mph by railway in 1904 on an ocean mails special.

However the prestigious shipping line Cunard chose to build their superb art deco terminal at Southampton in the 1930s as the latter gave better access to Le Havre on the French coast. Plymouth’s ocean liner importance waned and eventually extinguished as a consequence.

In later steam days Bullied Pacific locomotives handled all the crack express trains with the Lord Nelson 4-6-0s featuring on some of the Southampton boat trains. The 4-6-2s even ended up on single coach express trains split up from the multi-destination Atlantic Coast Express.

In later years, with the electrification on 750 V DC third rail to Bournemouth in 1967, the commuter network from London was effectively extended into the county of Dorset. Later on it would be extended even further to Dorchester and deny the class 33s from working along that coast to Poole.

The LSWR branched out at Salisbury to go across more sparsely inhabited country through Axminster, of carpet fame, to Exeter. From Exeter Central station the LSWR took a route across Dartmoor through Okehampton to Tavistock and then Plymouth at their own station at Friary.

This route has recently been resuscitated as far as Okehampton and there are hopes it will re-united with Plymouth via Tavistock again. Interest in this route has been re-kindled since the GWR’s route on the south Devon coast was washed out by storms. North Devon was serviced with a branch line to Barnstaple and Ilfracombe. The former has survived and the latter gone. The GWR’s Barnstaple branch did not make it either. The north Cornwall towns of Padstow, Wadebridge and Bude saw LSWR services but submitted to the cull in the 1960s of unprofitable branch lines.

The London and South Western Railway was absorbed or ‘grouped’ into the Southern Railway on the 1st January 1923 and as a result of the investment in electrified 3rd rail infrastructure a good deal of the semaphore signalling of the 19th century was modernised with colour light technology, however pockets survive and a good deal of LSWR architecture has been re-purposed for the 21st century.

Freight has seen a decline across all railways in recent years with the move away from coal fired power stations but much freight traffic has been generated by infrastructure track ballast requirements and the growth of Southampton as a container depot. Marchwood, near Southampton, is that rare beast of a military port, and the signalling infrastructure is from a bygone age. A particular feature was made of Marchwood in the book.

The preserved heritage movement is represented by the Mid Hants or Watercress Line and the Swanage Railway. Both railways represent the later Southern Railway scene but there is plenty of the LSWR to see as well.

All pictures by the author Allen Jackson except where indicated. 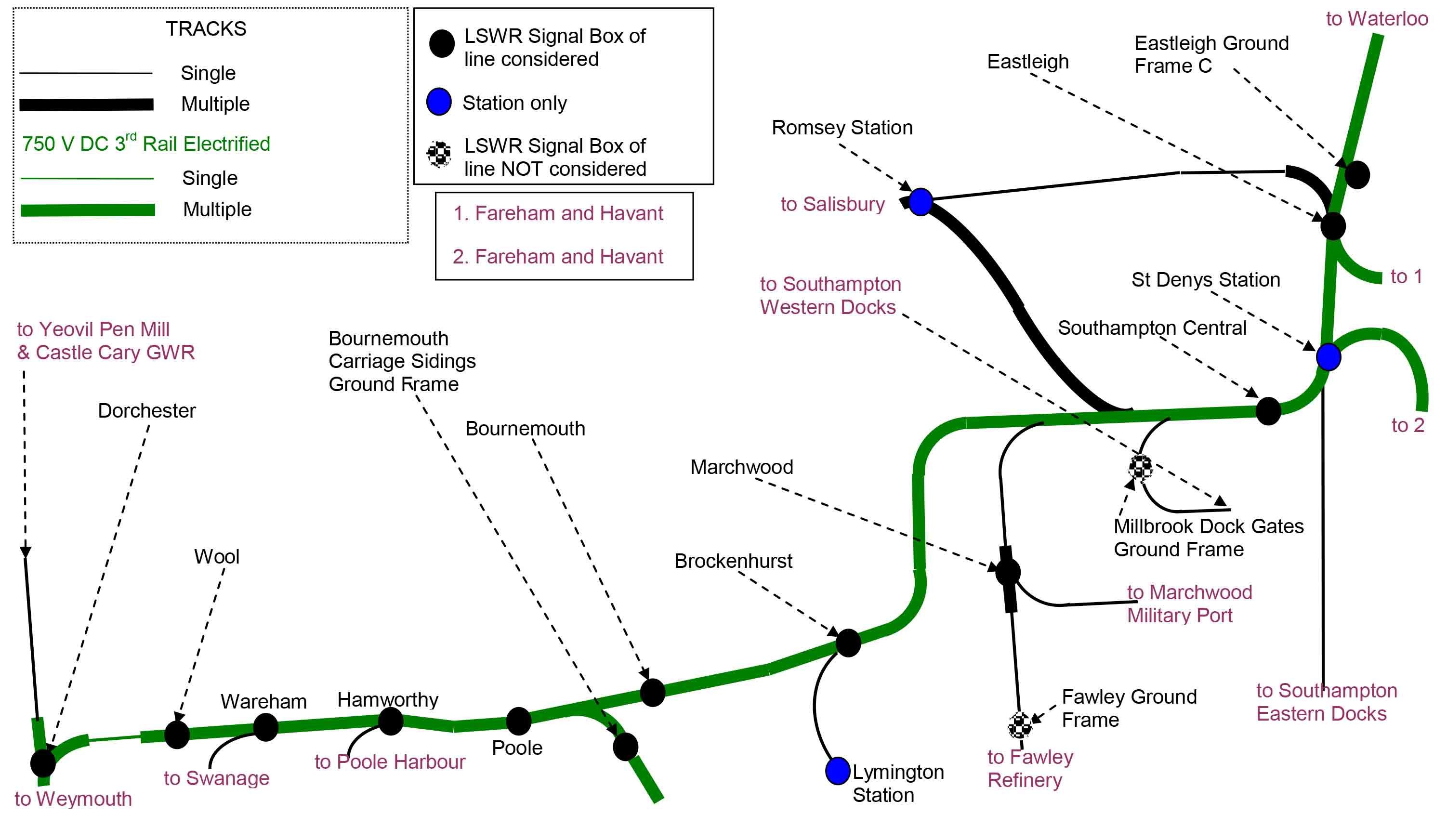 Figure 1. is part of the former LSWR network brought up to the 21st century. Eastleigh and Southampton are considerable freight hubs and Marchwood is the military port with semaphore signalling. Lymington is a surviving branch line from the cull of the 1960s. The LSWR line goes west as far as Dorchester where it has to share the city with the former GWR.

Figure 2. Railtrack and its successor Network Rail developed the concept of the virtual quarry. A massive pile of ballast with a rail connection. Trains of already crushed and graded rock from a real quarry turn up at the virtual one and discharge the contents of the monster box wagons (or similar) into a heap until someone says stop or the heap gets too big.

This operation attracts locomotives in numbers and here the list consists of: 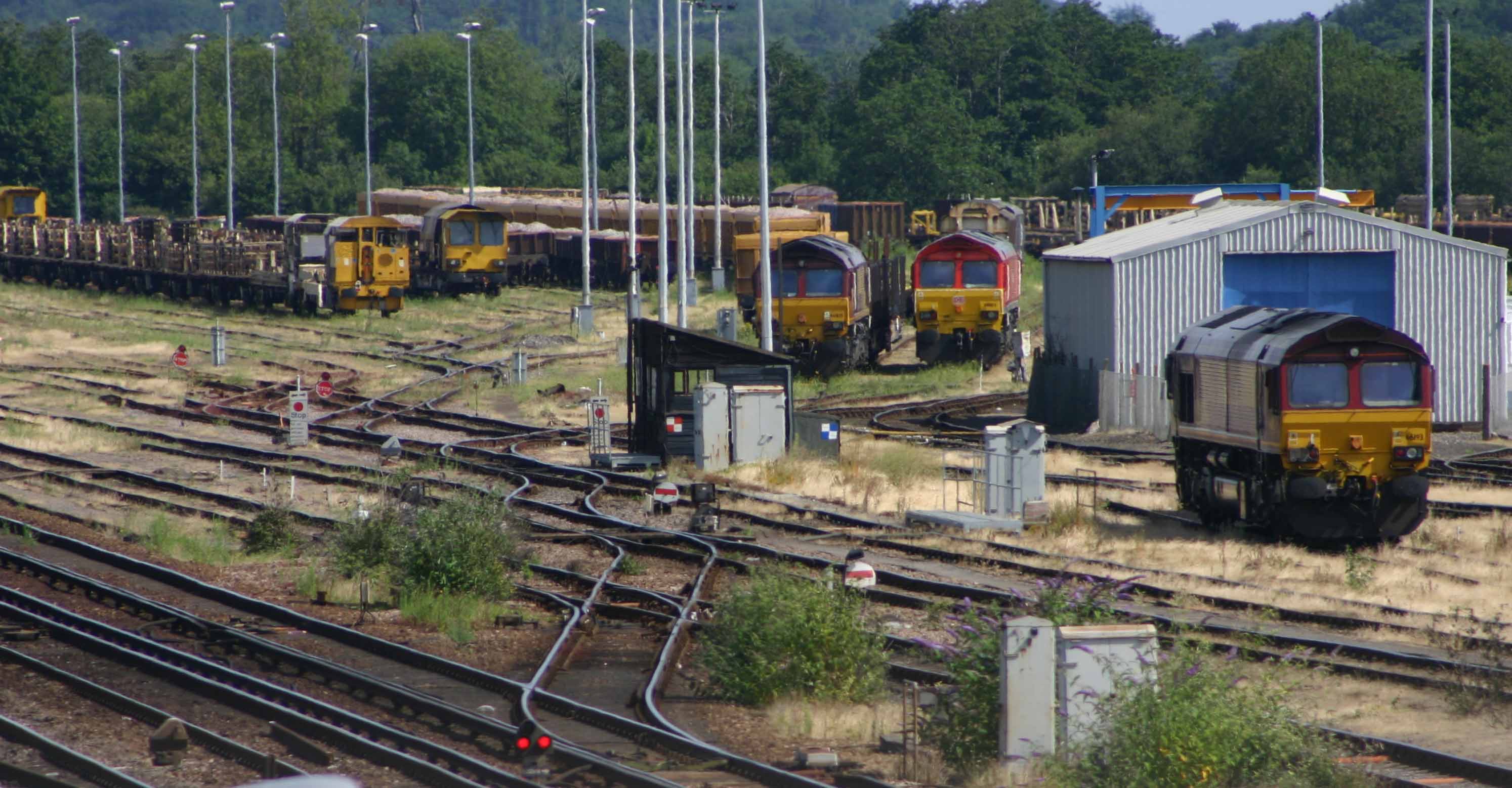 Figure 3. Eastleigh had its own electronic signal box in 2015 which resembles a low-rise block of social housing. However opposite the concrete building is this wooden hut which is a ground frame controlling the yard around it. Ground frames control yards or sidings as opposed to signal boxes that control running lines mostly. It even has mechanical signalling in the shape of ground discs local to the signal box/tower. The yard freight consists of track panels, red building sand and other aggregates. The locomotives on show that can be discerned are, nearest 66193, far left 66345, far right 66031. July 2015. 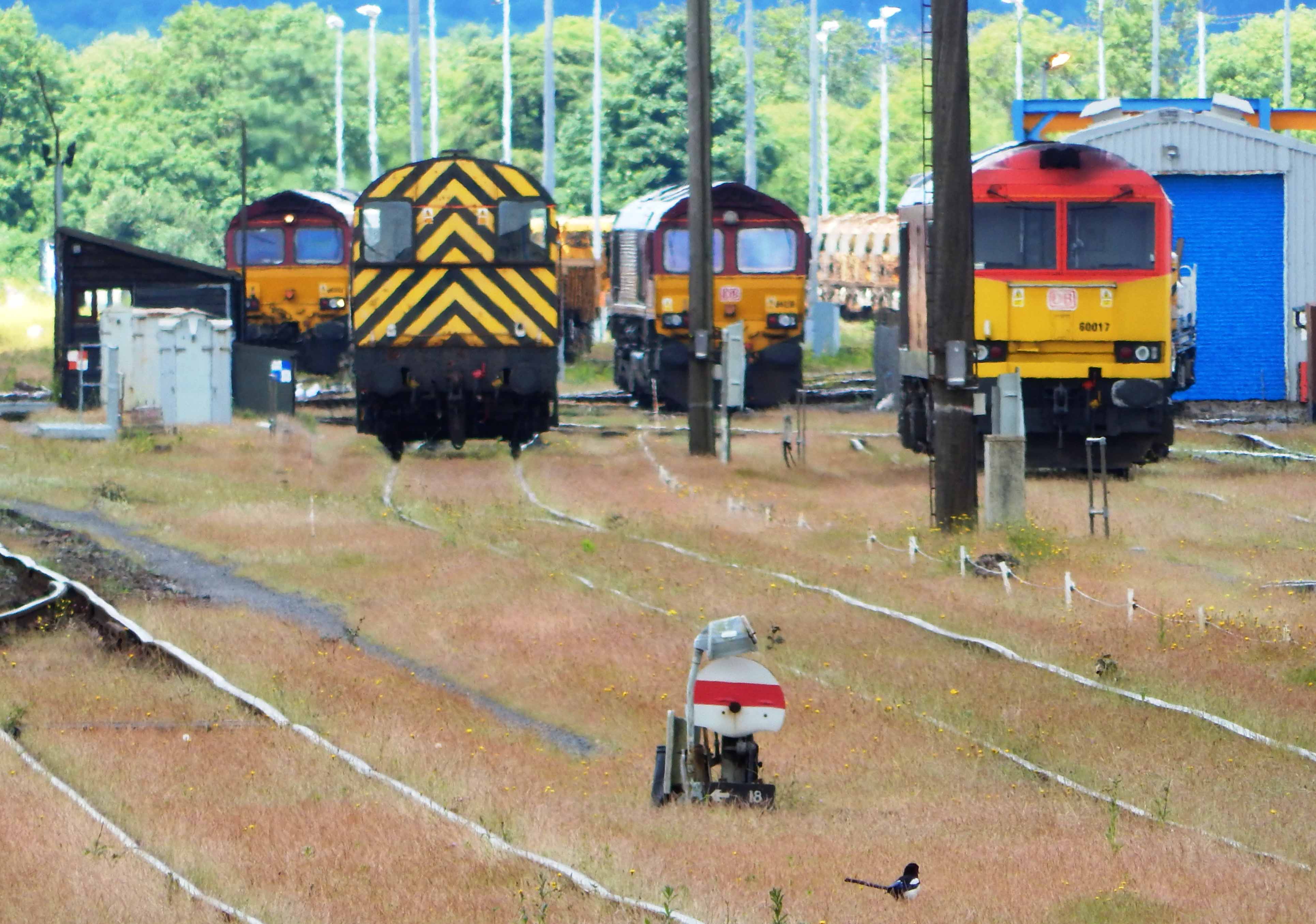 Figure 4. The view is towards Winchester, Basingstoke and Waterloo and the ‘goods yard’. There are Tilcon building sand hoppers in the yard.

The red and white chequer board warns of Limited Clearance and the blue and white No Refuges. Note the signal wire and white posts for the ground signal. The class 60 is 60017 and the local chat was that this was a rarity. The class 08 is believed to be 08 495 which was resident hereabouts at this time. The ground signal in the foreground is unusual in that it has a lamp to illuminate the signal face rather than a coloured spectacle. These are considered ever older hat. June 2016. 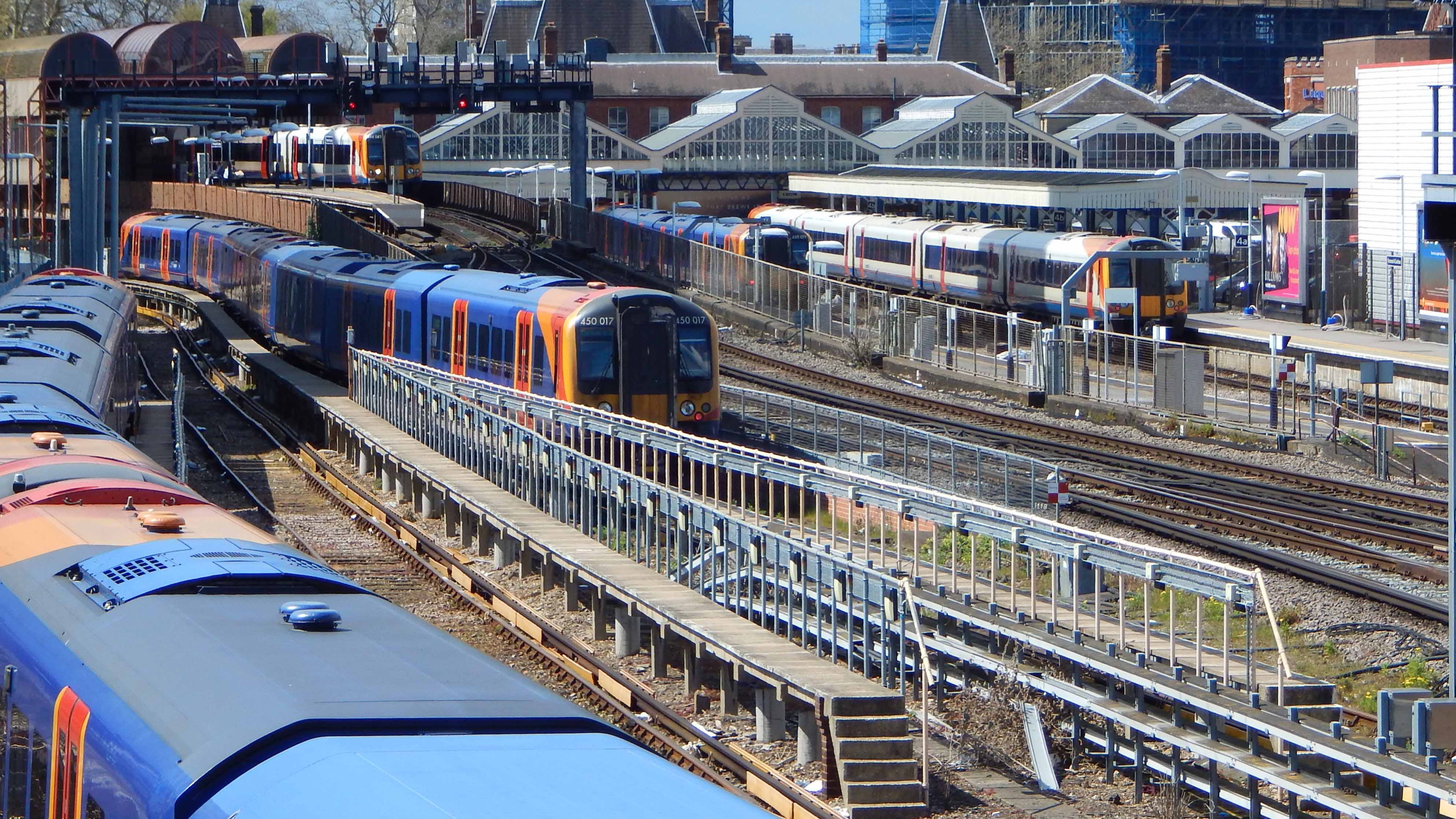 Figure 5. If it is passenger action that you favour then this shot shows the multi-level nature of Portsmouth and Southsea station, just down the coast from Eastleigh.

The carriage sidings, referred to as the ‘Down Sidings’ on the left (450 017), the elevated through platforms to Portsmouth Harbour station in the middle (444 043) and the much truncated two platform terminus station named Portsmouth and Southsea on the right with the period awnings (450 019 in the blue livery). All now controlled by Basingstoke signalling control centre. April 2016.

Figure 6. The signal box at Marchwood is more of a platform mounted frame inside part of the now closed station building. The box was established in 1925 with 5 levers as a non-block post and then converted to a 24 lever Stevens frame in 1943 which it still has. Note the point rodding and signal wires emerging and the step down to the key token platform for the left hand loop line. The gates are hand operated by the signaller and the direction is towards Totton Junction and the main line. 2015. 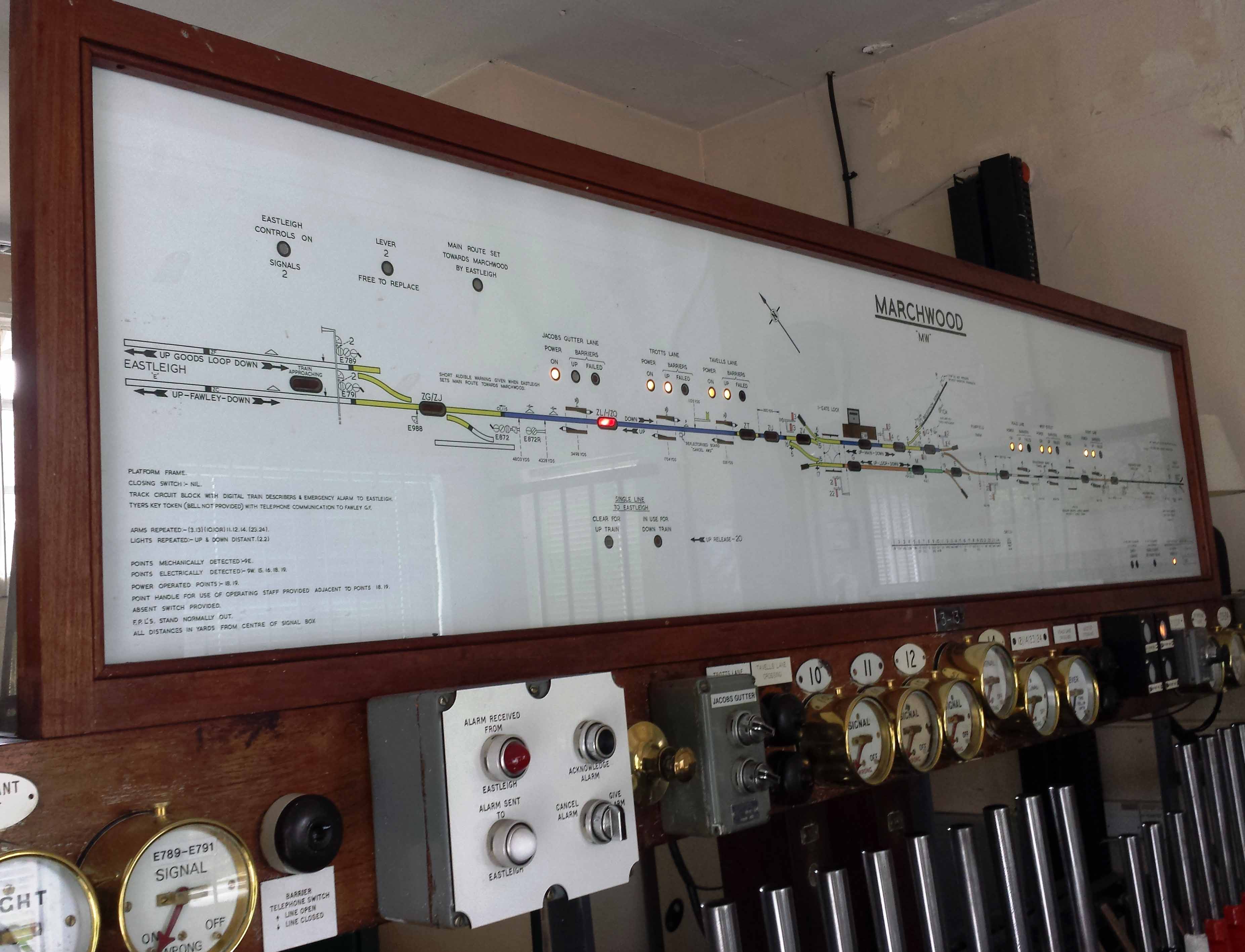 Fig. 7 is the interior of Marchwood signal box and the signalling diagram. The red light on the blue track circuit is a train we shall see later. From the left the line is controlled up to the commencement of the single track by Eastleigh and the status of some of Eastleigh’s signals is displayed in the box albeit on moving coil meter indicators from the semaphore era. There are then three crossings before the loop, which is bi-directionally signalled and the black line to the top of the diagram is to Marchwood Military Port and straight on to the right to Fawley which is the site of an oil refinery. The station building, platform and signal box appear as a series of black rectangles above the running loop lines.

Note: There is a useful summary of the signal box functions on the bottom left of the diagram and they are reproduced below with some explanatory notes for those not familiar with the older technology in lower case. 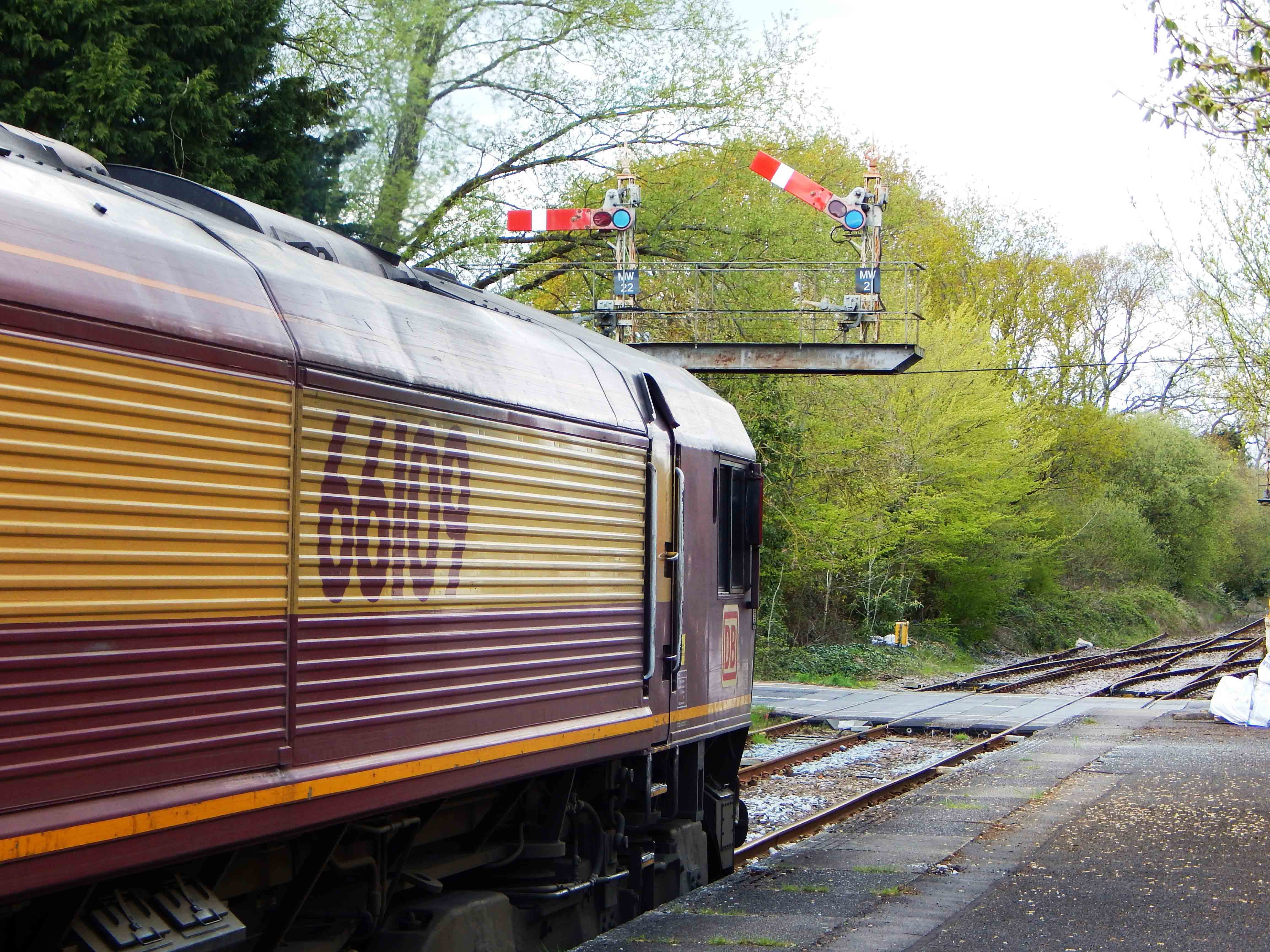 Figure 8. The driver of EWS branded but DB Schenker labelled class 66, 66 109 has the off from signal MW 21 as a starter for the journey to Totton Junction and a Ministry Of Defence (MOD) establishment, originating out of the port. First he must physically hand in the single line token in his possession. When the machine has issued a token to a driver it acts as the driver’s authority to proceed on that section of track. It also locks the token machine to prevent any further tokens being issued at either end of the section. The token machine can also act as a train describer with its own bell system. No doubt, with the present invasion of Ukraine, Marchwood has got busier as Britain supplies defensive weapons to the Ukraine. 2016. 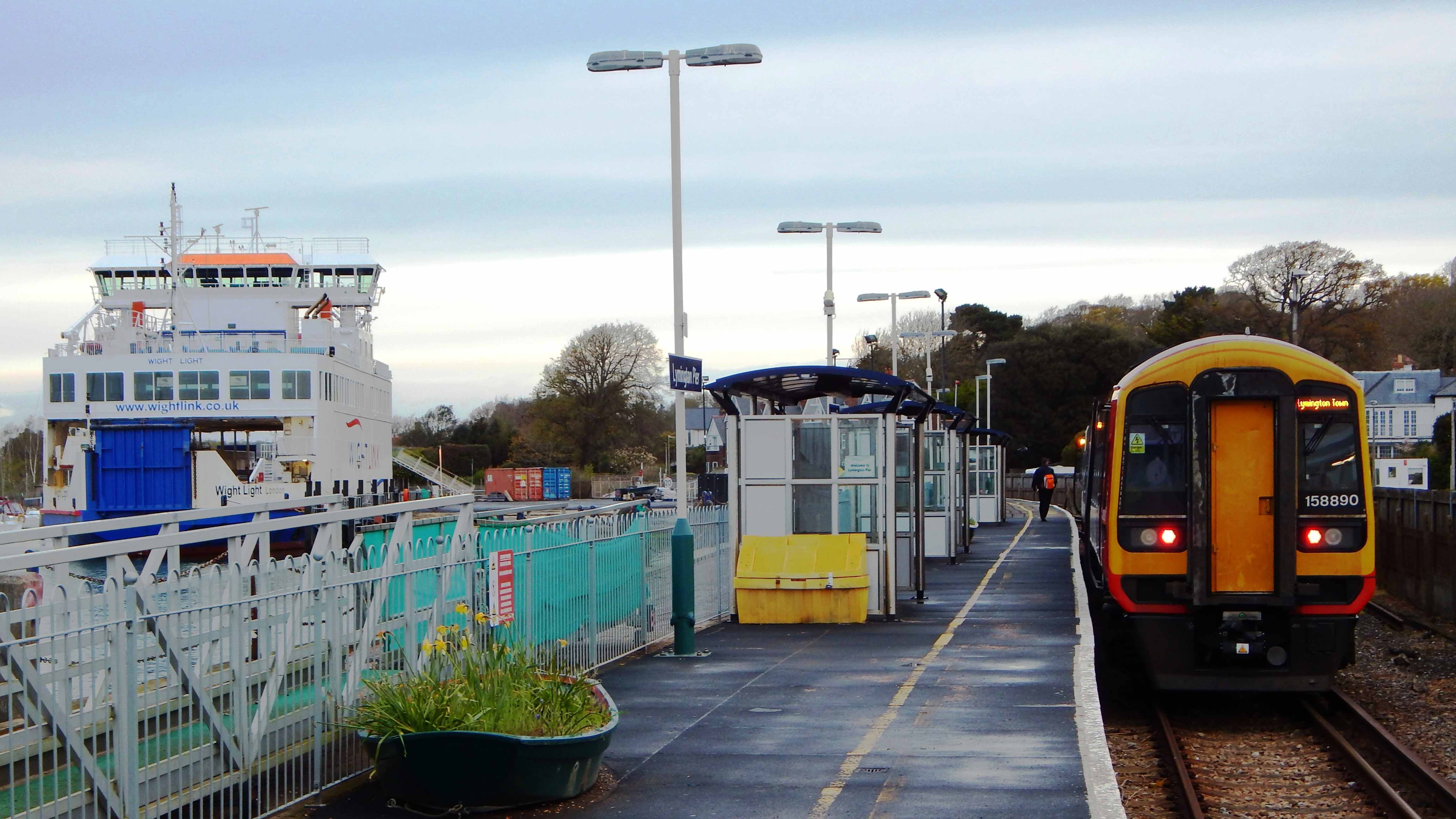 Figure 9. The DMU class 158, 158 890 is at Lymington Pier station. The destination of Lymington Town on the DMU was the location of the steam shed until 1967 which used Ivatt 2-6-2 tank engines at the end. The Wightlink ferry on the left claims to offer the fastest crossing to the Isle of Wight to Yarmouth. The Lymington branch is signalled One Train Staff with track circuits. This means that a physical token is issued to the driver but the integrity of one train in the section only is maintained by track circuits. A train must operate two contiguous track circuits on its way out of the section before the system will permit another entry. All signals are locked in the opposite direction until that event takes place. April 2016. 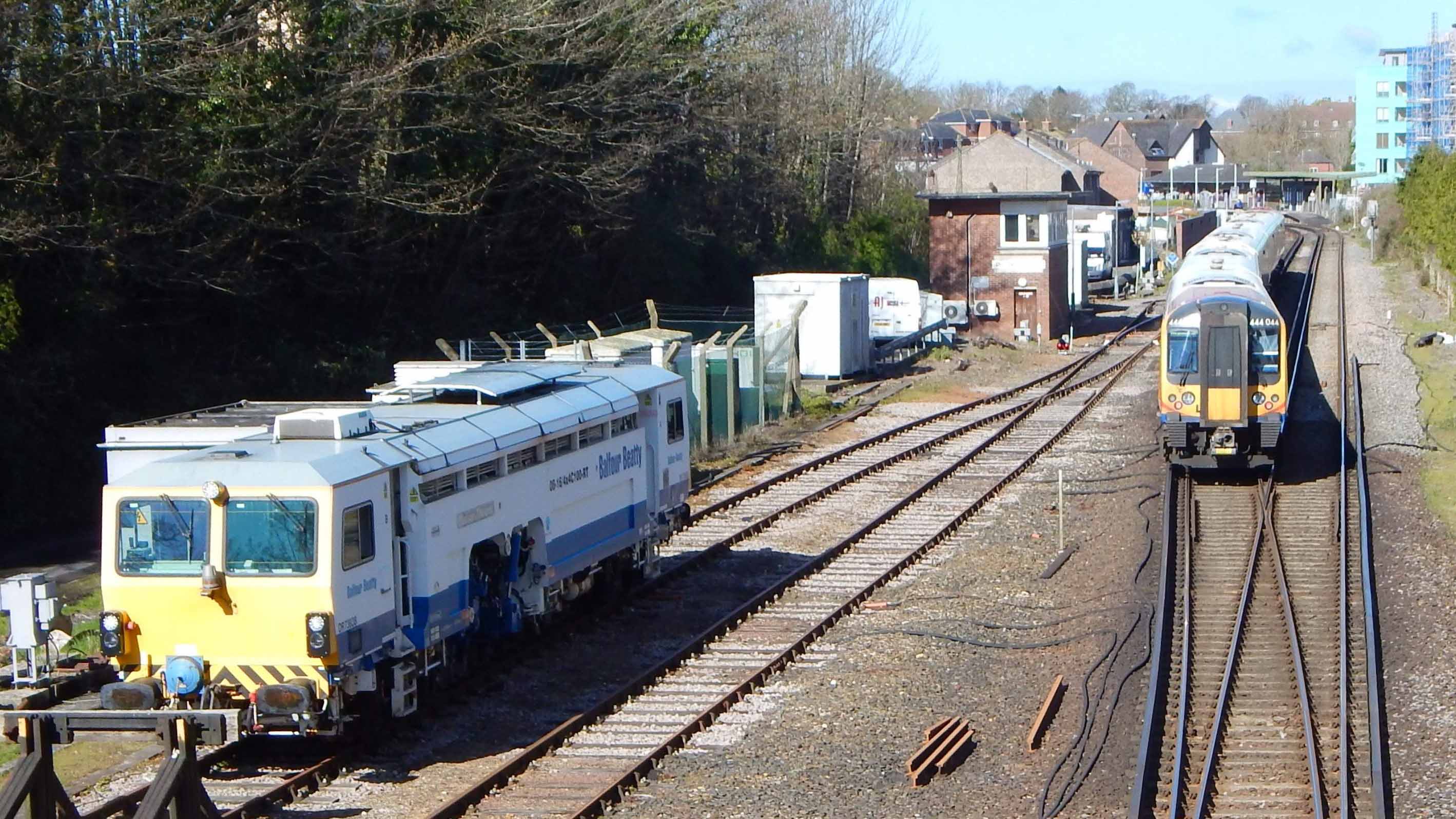 Figure 10. As far as we are going on our LSWR journey at present. Class 444 044 EMU drifts over the crossover to platform 2 at Dorchester South station, past the signal box. The small yard on the left used to see some stone traffic from a quarry at Wool, please see Figure 1. A class 66 used to arrive with empty wagons at Wool and because the train was too long for the siding at Wool, the loco would park the extra wagons at Dorchester until the first lot had been loaded then swap them over until both sets were loaded whereupon the train could depart for south west London near Heathrow airport. April 2016. 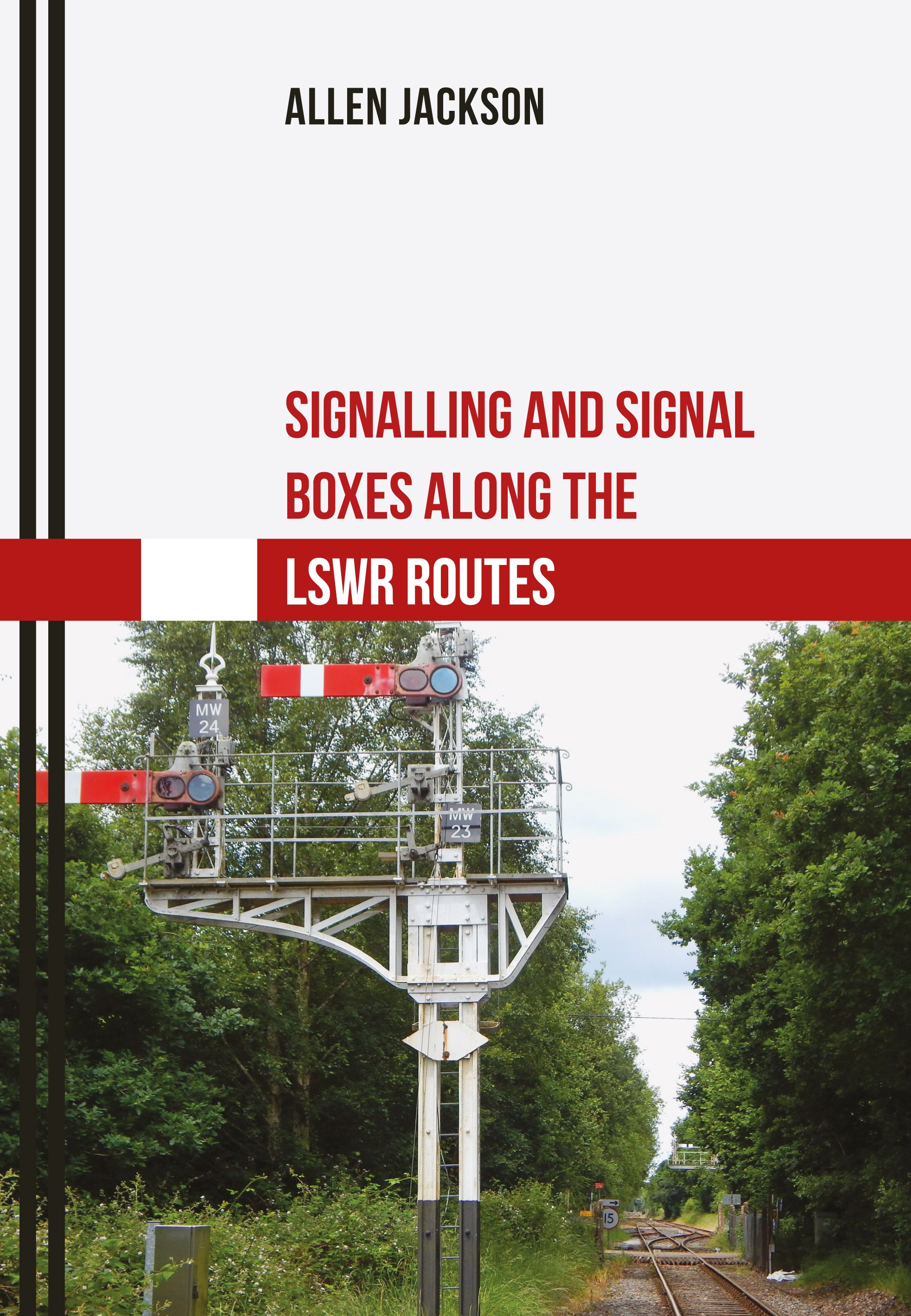 Signalling and Signal Boxes Along the LSWR Routes by Allen Jackson is available from Amberley Books: https://www.amberley-books.com/discover-books/local-history/area/berkshire/signalling-and-signal-boxes-along-the-lswr-routes.html