Like the wider Northwest of England, the end of steam was nigh at Liverpool Lime Street in the early 1960s. In a continuation of our look at this fascinating time of British railway history, Hugh Hollinghurst shares with us his knowledge of the era, covered with the wider history of Liverpool's railways in his Amberley Books title: Liverpool's Railways Through Time.

All photographs by Roger Golder. 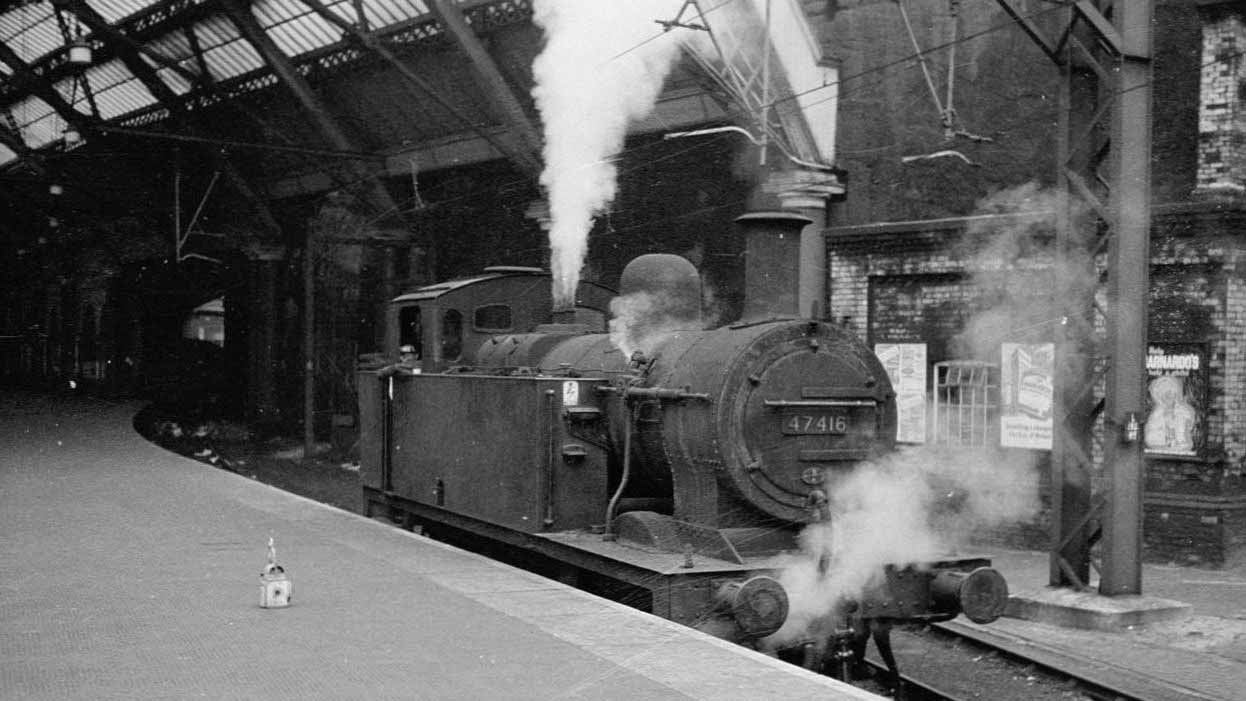 Station pilot Jinty 0-6-0 47416 awaits its next call of duty behind platform 1 at Lime Street station on 3 September 1965. It is well prepared with a good head of stream to blow off but it is also sprouting leaks because of poor maintenance at this time. This and the opposite side of the platform were much used for parcels traffic. The lamp on the platform is intended to show anyone that the train is actually standing there! The driver or fireman is looking back from the cab to see when his mate is going to come back from the ‘fresher’ with a new can of tea. In the circumstances, it is difficult to see whether the posters would gain anyone’s attention but they tended to be plastered anywhere. 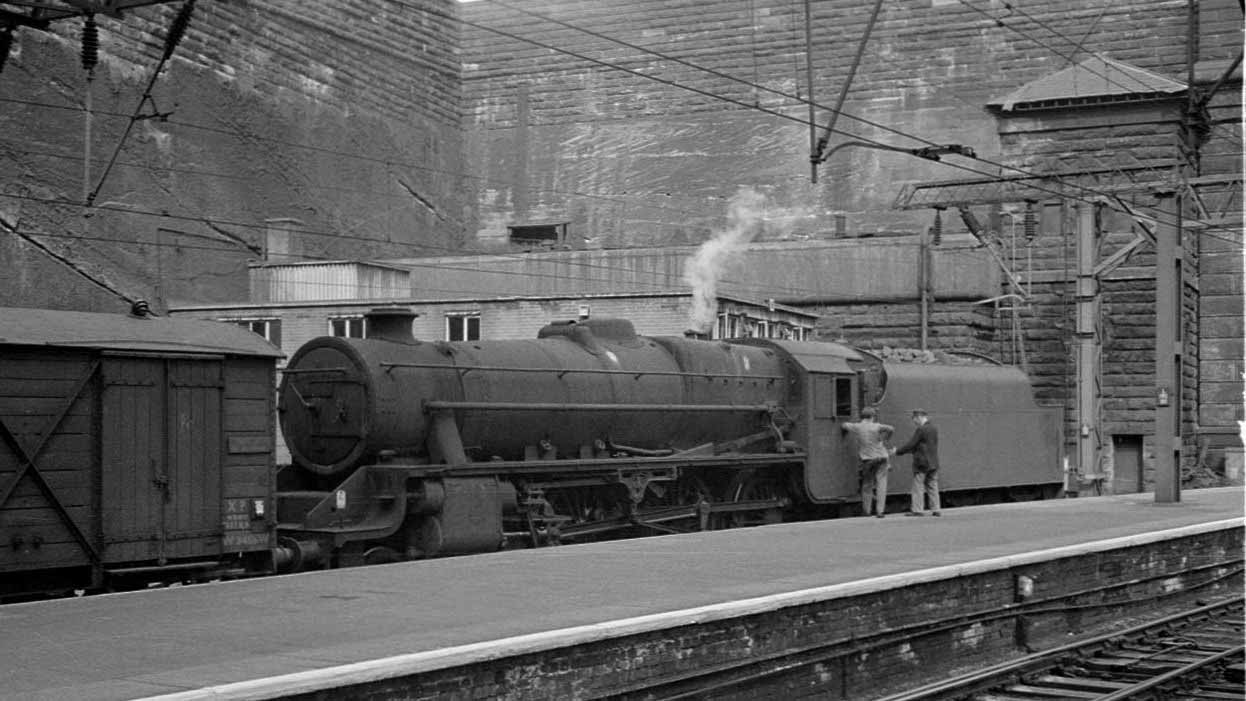 ‘Black Five’ no. 44864 acting as station pilot is resting with some parcels traffic at the end of platform 2 in June 1965. The crew are taking it easy until the next call of duty. The engine is one of the most numerous class (842 in all) of any owned by one company in the land. It formed the largest contingent at Edge Hill shed at the time as it was so versatile in reducing the numbers and variety of steam locomotives. Five is one of the grades of power used to assess the power of the machine, nine being the highest and these locomotives were painted black, hence their sobriquet. The building behind is the locomen’s booking point after Edge Hill MPD (Motive Power Depot) closed in May 1968. Before that, there was a booking-on point up in what is the now restored North Western Hotel. 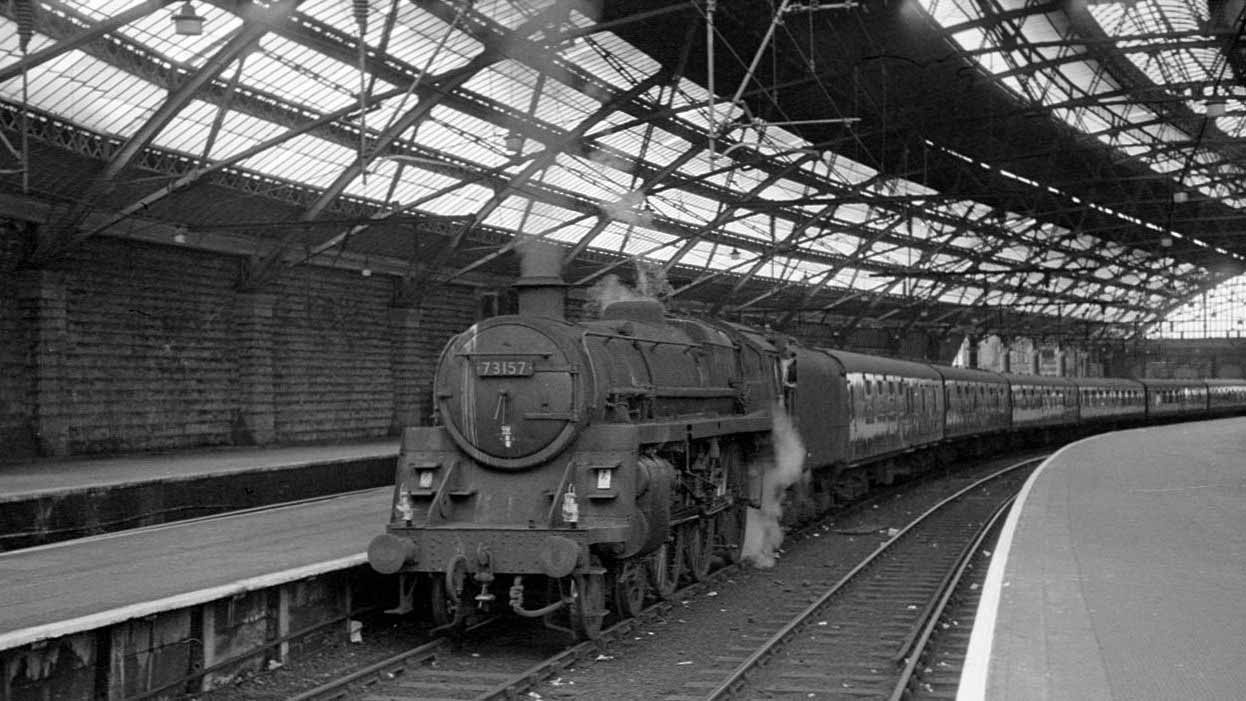 The 4.30 Liverpool to Llandudno train is preparing to leave platform 9 on 17 June 1965. It will stop at Chester at 5.11 and arrive at Llandudno at 6.32, after four further stops at North Wales resorts. On Thursdays like this there are a limited number of coaches but on summer bank holidays the load amounts to twelve. With stops and starts at six stations, the fireman would then be shovelling six tons of coal into the firebox. Now, this journey would take half an hour longer via Merseyrail changing at Chester. Based at Chester, locomotive no. 73157 is one of the British Rail’s Standard Class Five locomotives. The design was based on the ‘Black Fives’ of the London Midland and Scottish Railway (LMS) after trials to see which of the four constituent companies’ comparable engines were the best. The platforms on the left have been converted into a rather cramped car park. The wide platform on the right is a relic of the old carriage way. Notice the splendid curving roof. 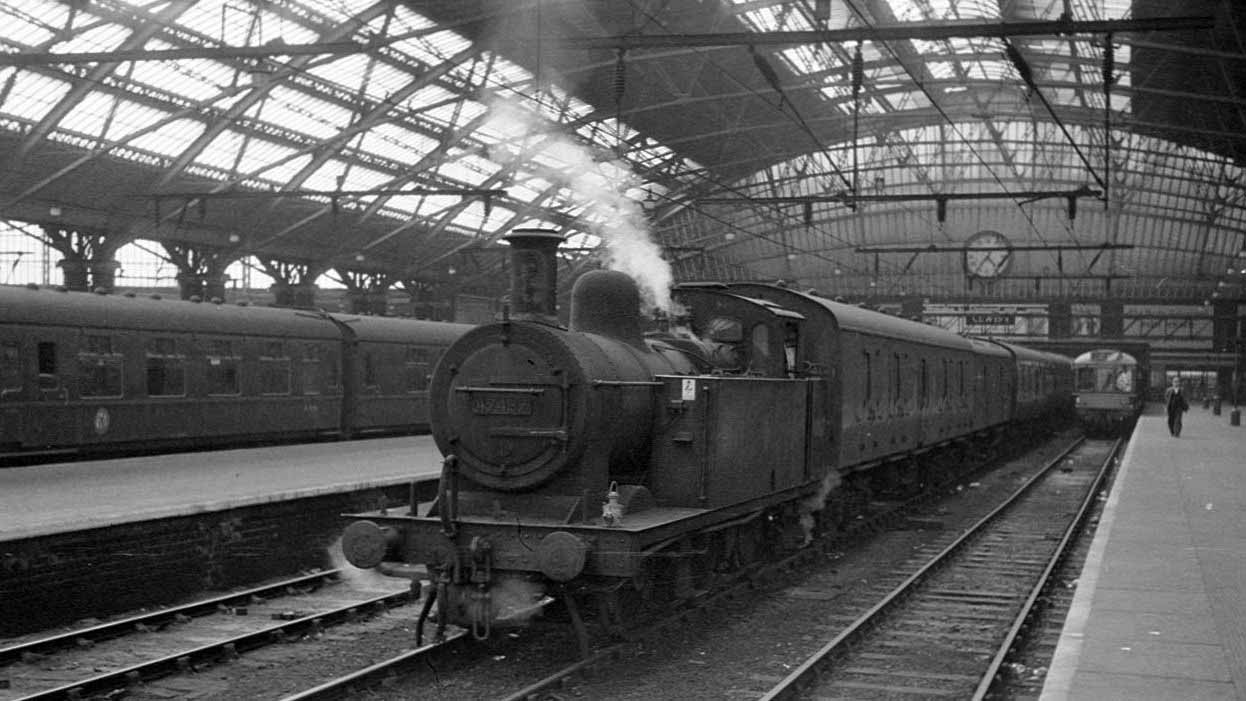 Awaiting its next call, 47416 simmers in one of the spare carriage sidings, useful in 1965 for empty sock. Three of them were set between platforms 1 & 2, 3 & 4 and 5 & 6, known as ‘one and a half’ etc. This one is standing in three and a half’. The class of tank engine, nicknamed Jinty (no one knows why) was ideal for shunting duties as ‘station pilot’. On the right is one of the pioneer DMUs (Diesel Multiple Units) while on the left a carriage displays the attractive original British Railways emblem on its side. The carriage siding is now useless and unused with the advent of the DMUs. For a while it was useful for storing ‘leckies’ and diesels, as below! 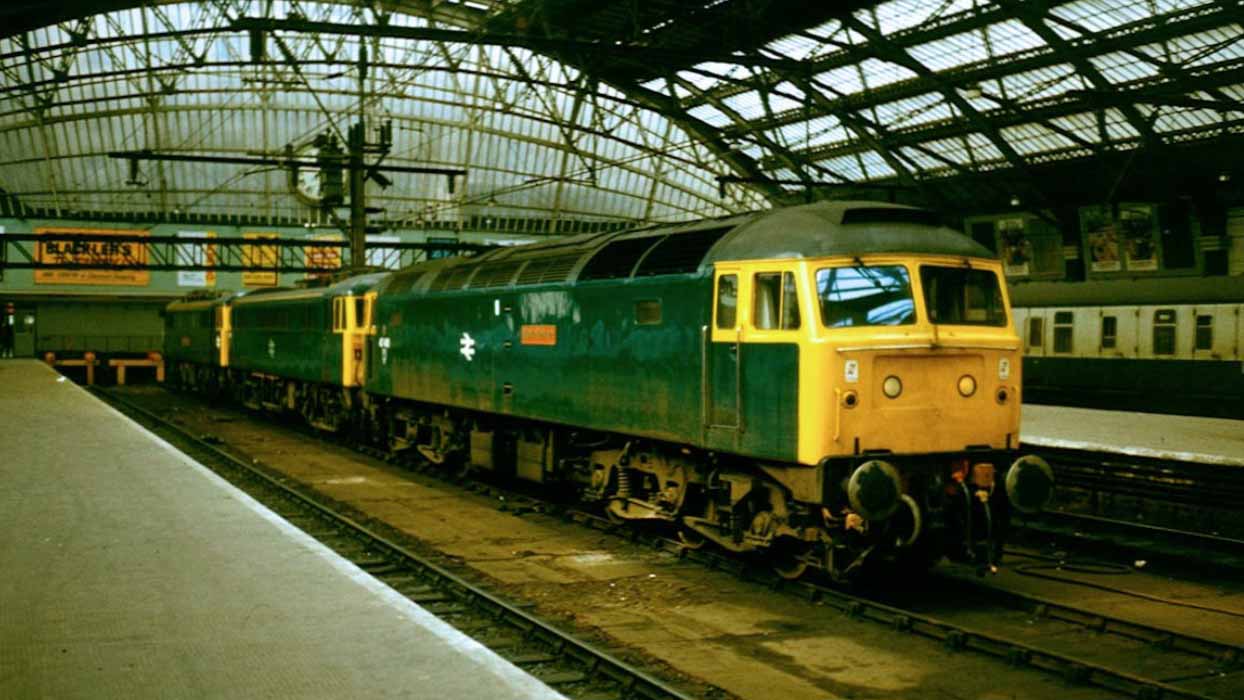 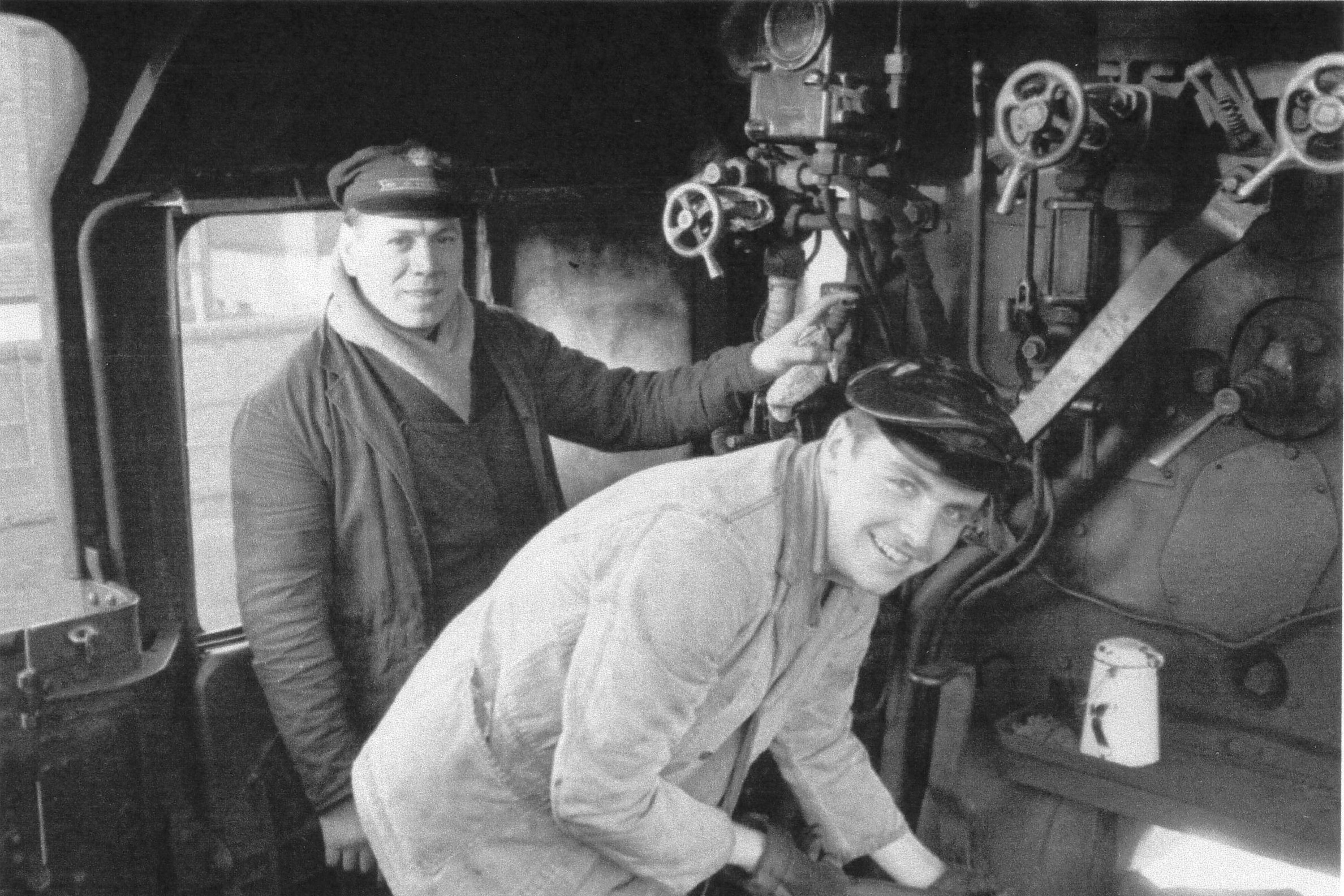 Wally Reynolds and Georgie Newton, crew of 2-8-0 no. 48746 are extremely cheerful and in good shape as they prepare to work a pre-fab train (with prefabricated track) from Fazakerley to Blackburn (returning light engine to Edge Hill). In fact, the work could be physically harsh, dirty, unhealthy and dangerous, even lethal. The 2-8-0s were designed for heavy freight work and 849 were built in total for the London Midland and Scottish Railway and the War Department for military service. At this time 18 worked from Edge Hill shed, the most ever, when, in the twilight of steam, they had been relegated to mundane mixed traffic duties. 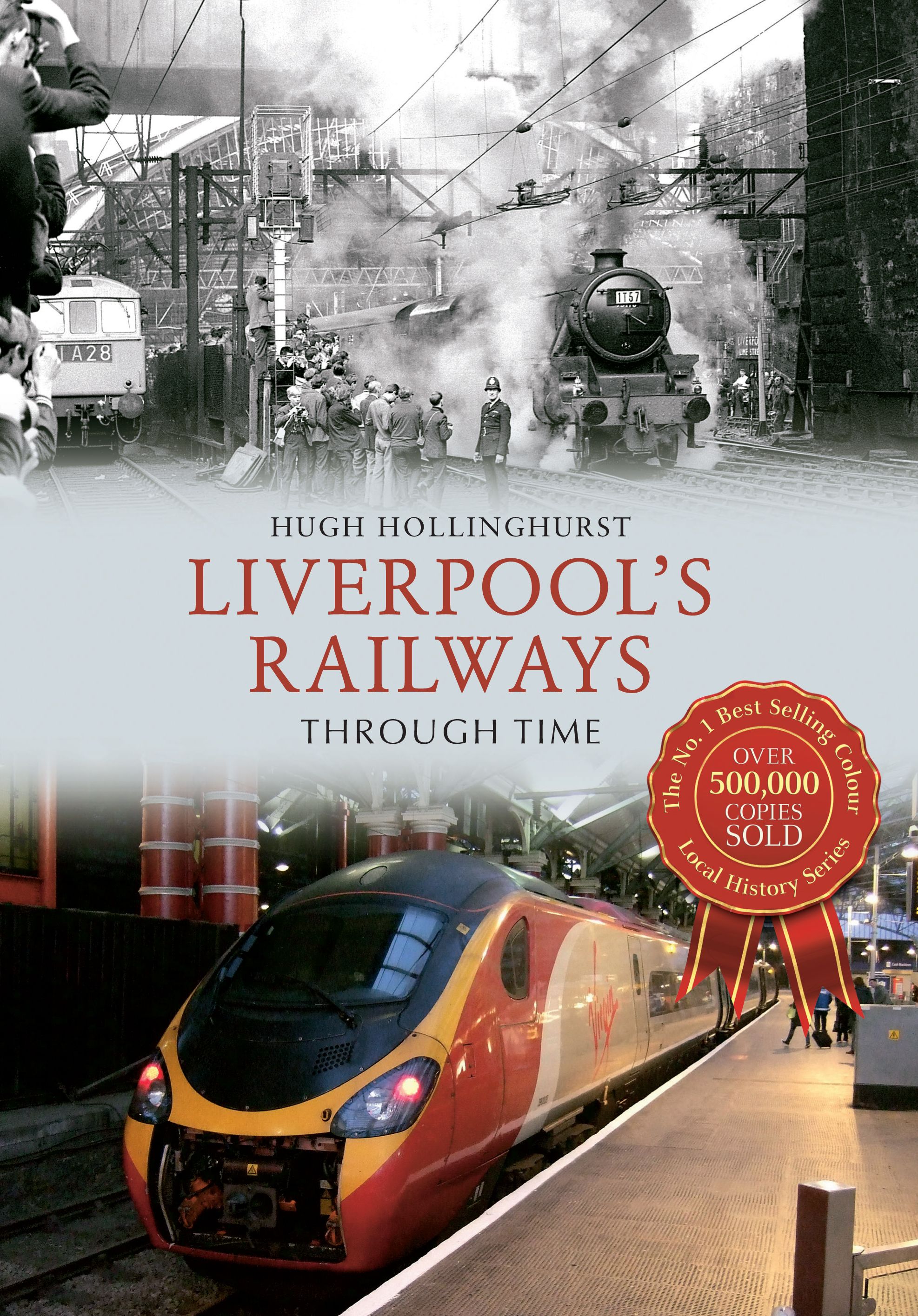