Though many people remember well the countless celebrity faces that have claims to being railfans in their spare time, rarely are railfans themselves remembered for their feats and acheivements. Rod Stewart is well known for his model making, President Joe Biden for his fondness of Amtrak and Pete Waterman is probably the best-known example of a notable person who regularly and candidly shares his passion for railways with other railfans through various appearances and collaborations.

But the story of Roger Puta is very different to those above. His railfan fame did not come from politics, music or movies, but from railfanning itself. And though he may not be someone known to everyone in the street, to railfans his is something of a legend. Today, the Roger Puta Collection is cited frequently across the internet, in magazines and books about railroads and railfanning. Today's railfans will no doubt have seen his material, in the form of photographs spanning a wide range of trains and locomotives both within the US and beyond and even readers of We Are Railfans articles will have seen the occasional use of his photographs.

This is because Roger Puta's collection of railway and railroad photographic slides are mostly in the public domain, thanks to two of his friends Mel Finzer and Marty Bernard who have curated a large number of slides since his untimely passing in 1990. Until then, Roger had spent a number of years working on the railroads, namely the Santa Fe and Western Pacific and this exacerbated his passion for taking transport photographs. He also served time in the US Navy and later co-ran a tourbus company. Anecdotes of other railfans meeting Roger are commonly recounted in various railfan internet forums and websites, as is much about the man himself. It's clear from those accounts that he was not only well respected as a prominent railfan, but happy to share that passion with others whom he met along the way.

The collection available online today encompasses a wide range of US railroad stock, stations, yards and locomotives as well as those in neighboring Mexico and Canada. From the standard and expected, to the one-off and rare, intimate shots of E and F-Units, Amtrak services and even the Flying Scotsman on US soil make up thousands of high quality railfanning shots that we can all aspire to in whatever country we live in. As a result, the impact that Roger Puta has had on the world of railfanning, particularly in the USA, is profound. A fitting legacy for someone whose passion for railroads is mirrored in so many of us.

You can view the online collection here.

Below are a selection of images depicting the breadth of subject matter in Roger's photograph collection. Though these images are in the public domain, courtesy of Mel Finzer, use is under the condition that they are correctly attributed to him and in each caption, we have linked to the source, which is Marty Bernard's Flickr account. 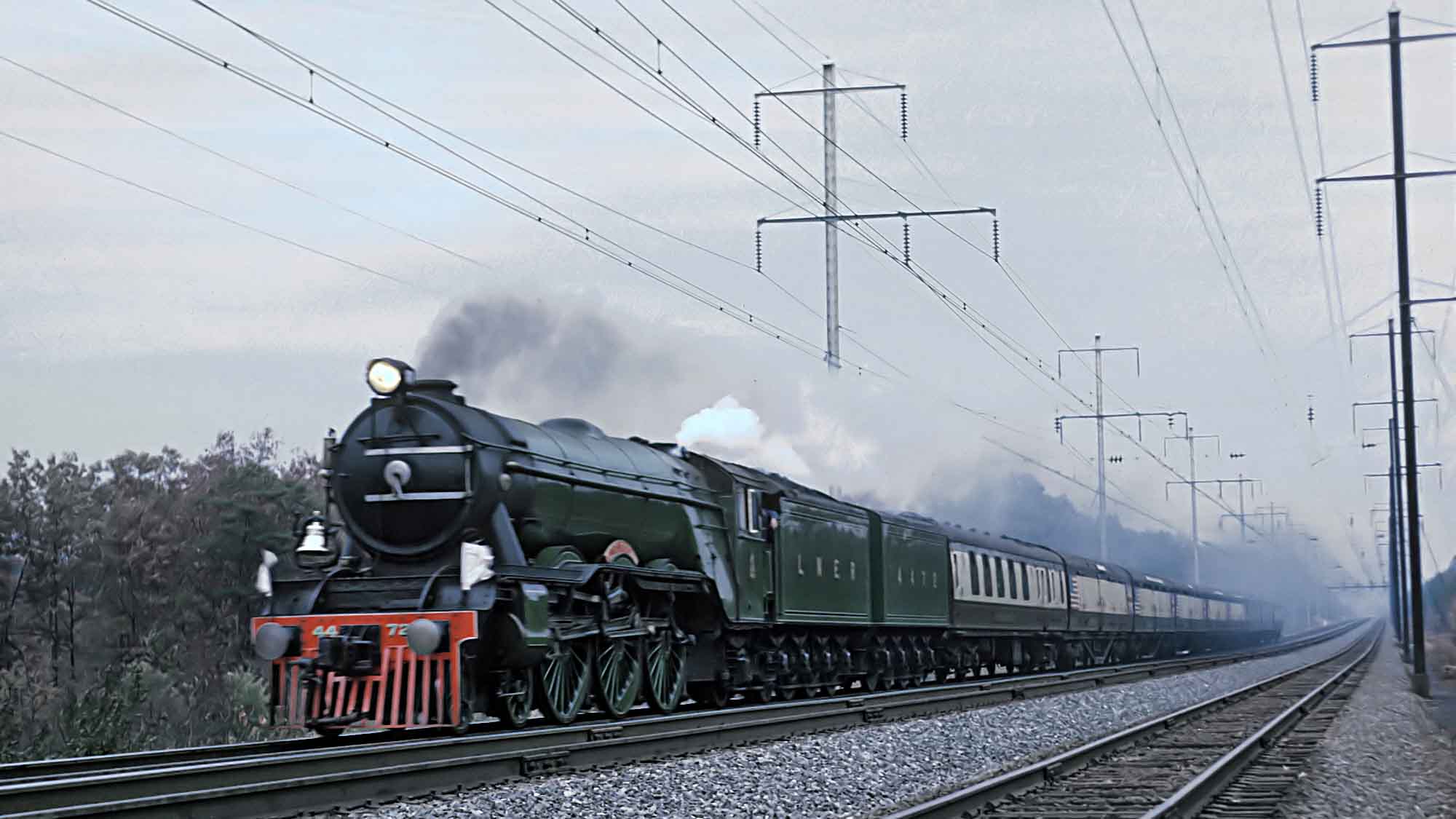 'Flying Scotsman' at Glenndale, MD on October 25, 1969. A Roger Puta photograph. This iconic and popular locomotive was in its first year of an extensive US tour back in 1969. It left the USA in 1973, eventually going to Australia in 1988 and '89. Today it remains much loved in its native UK, drawing railfans from far and wide when on the mainline or heritage railways. 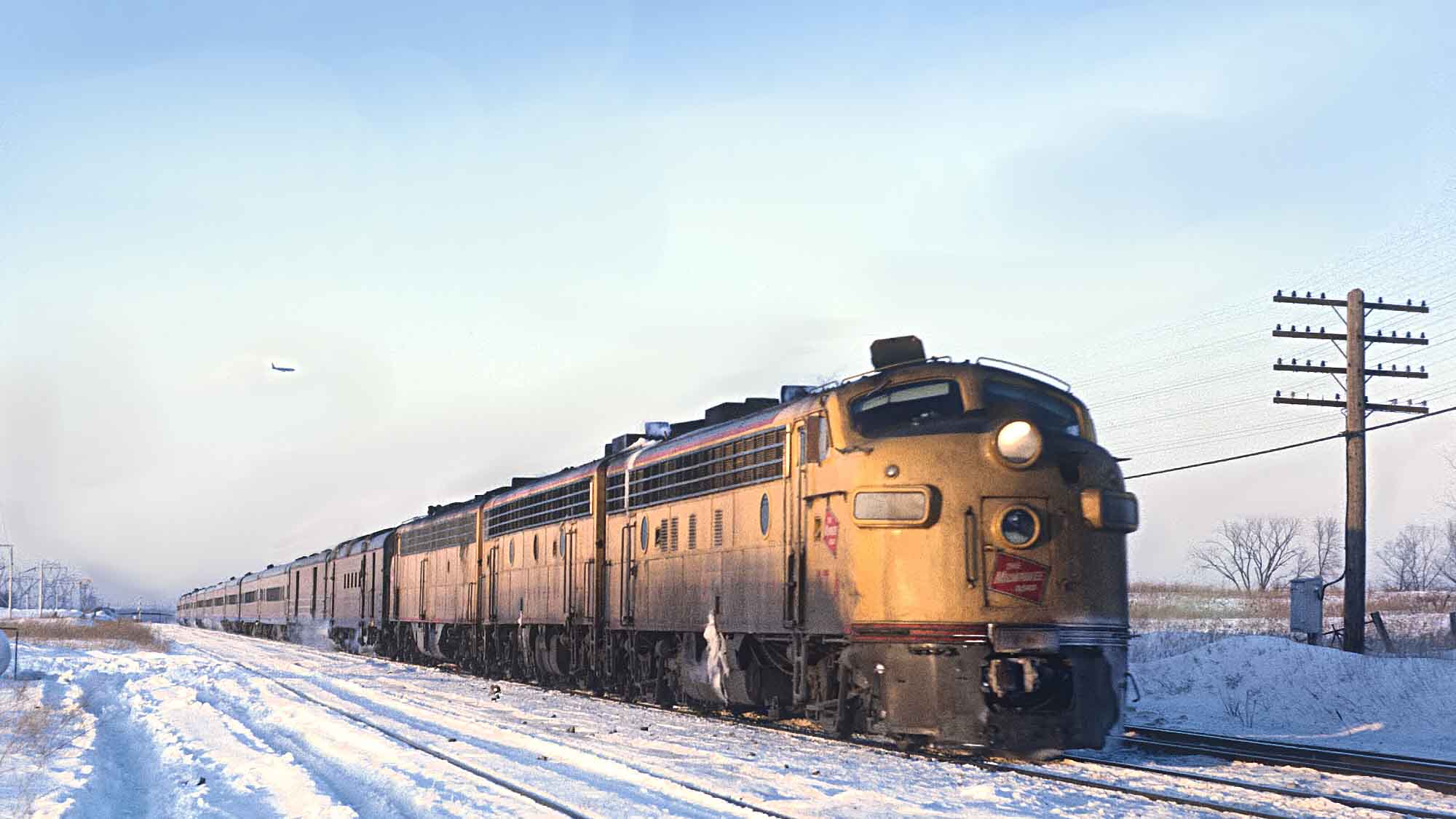 'The Morning Hiawatha', running almost 5 hours late with no dome at Lake, Wisconsin. at sunset headlight off to meet a freight on January 29, 1966. A Roger Puta Photograph. 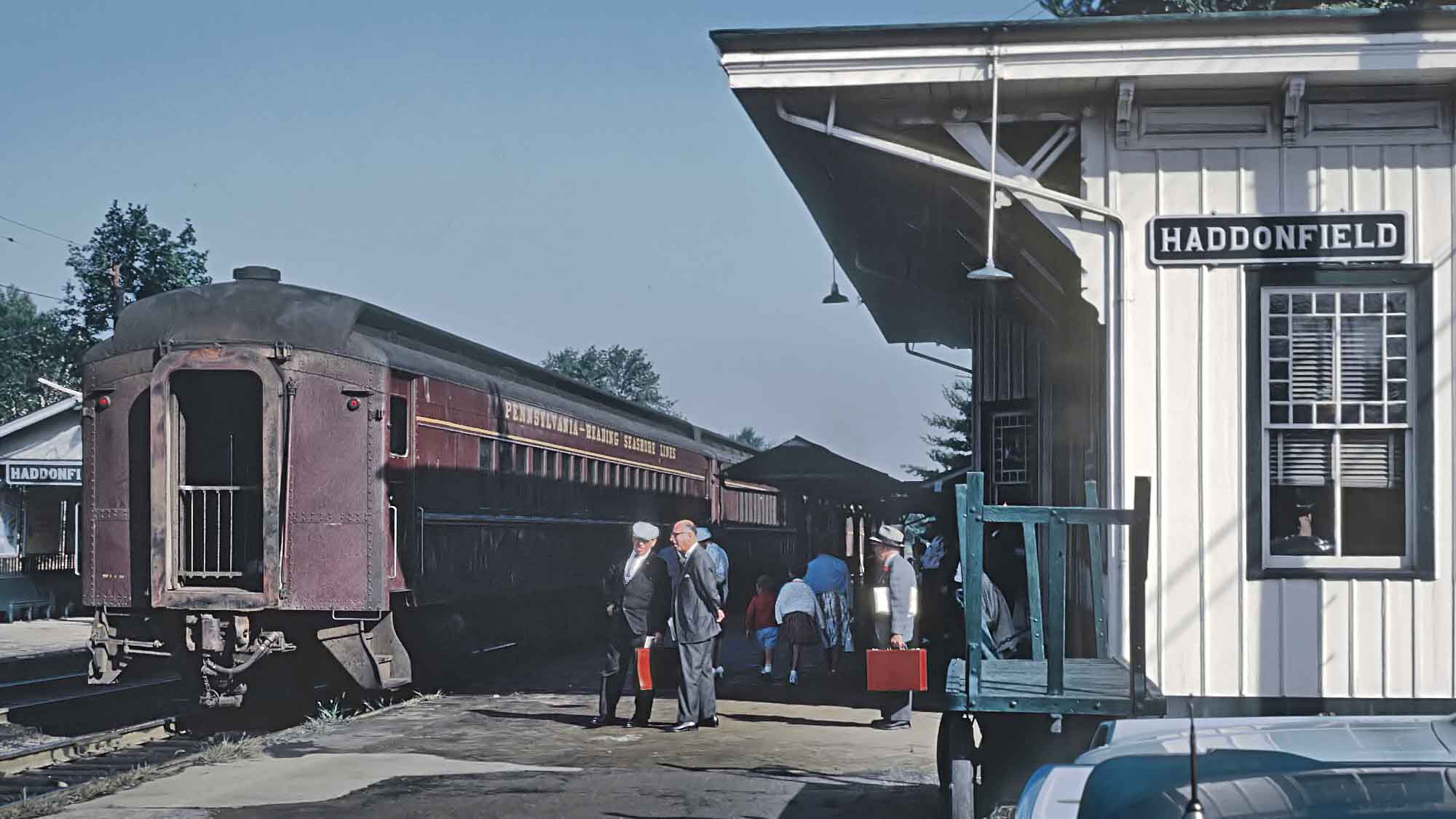 Train 1008 stopping at the Haddonfield, NJ station on September 2, 1965. A Roger Puta Photograph. Though the photographs of locomotives and trains garner the most attention from Roger's collection, beautifully shot images of stations, passengers and empty lines are also worth viewing and depict something of an artform. 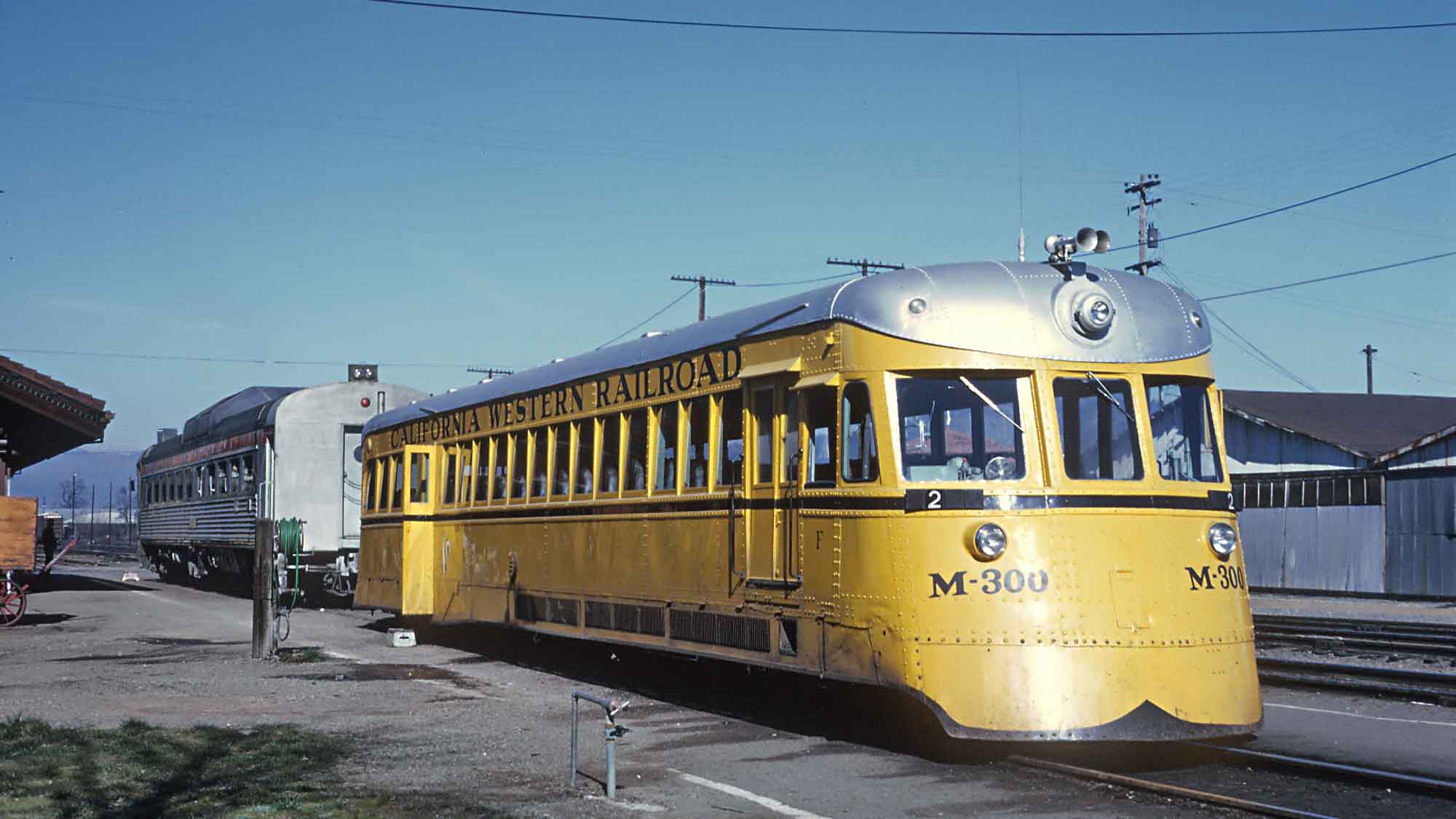 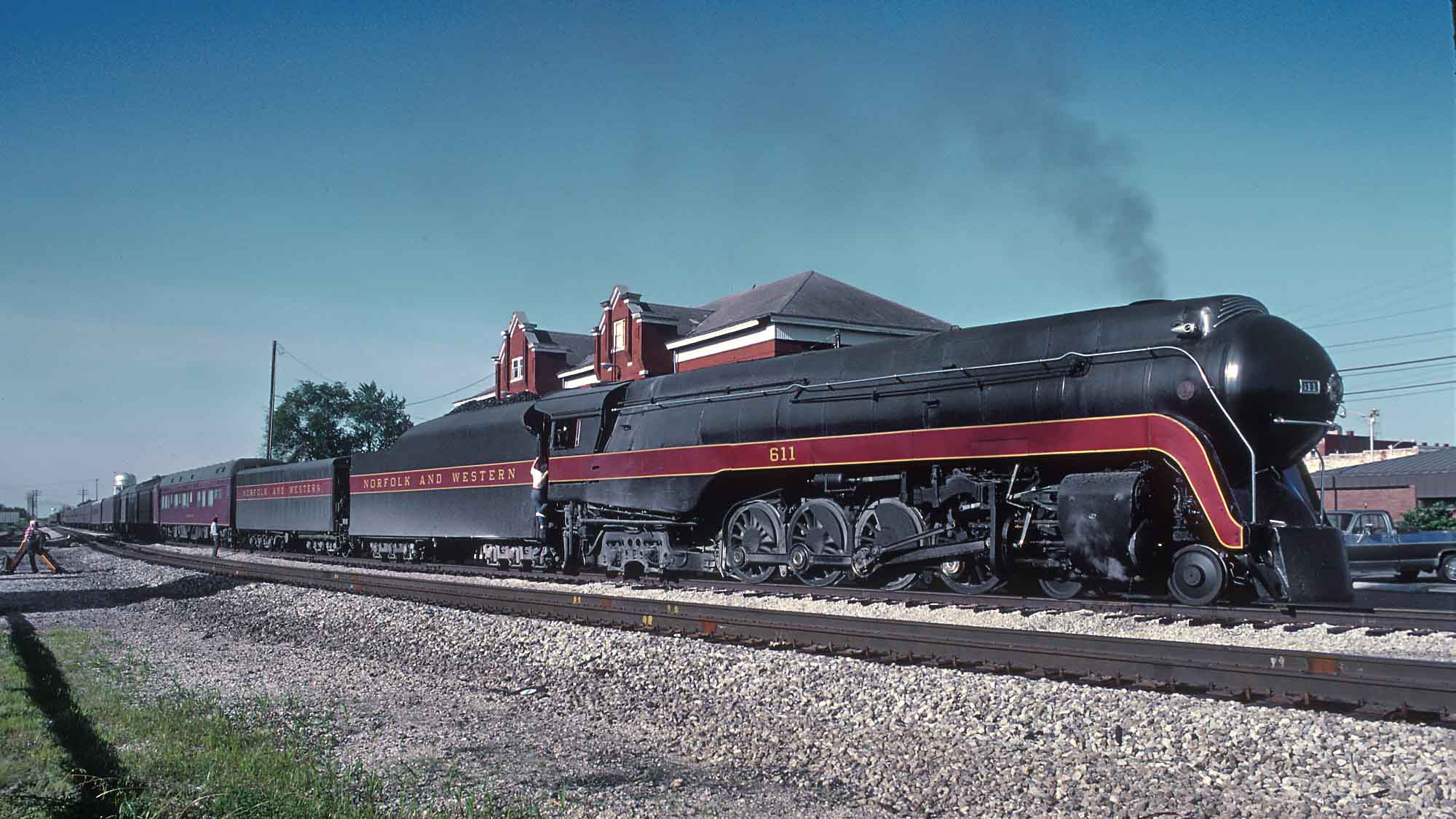 NW 611 in Moberly, MO the morning of June 18, 1985. A Roger Puta Photograph. We covered 611 in a previous article about 'sole surviving locomotives' and this is certainly one of the most popular on US excursion trains. It will no doubt continue to be photographed by railfans for many years to come. 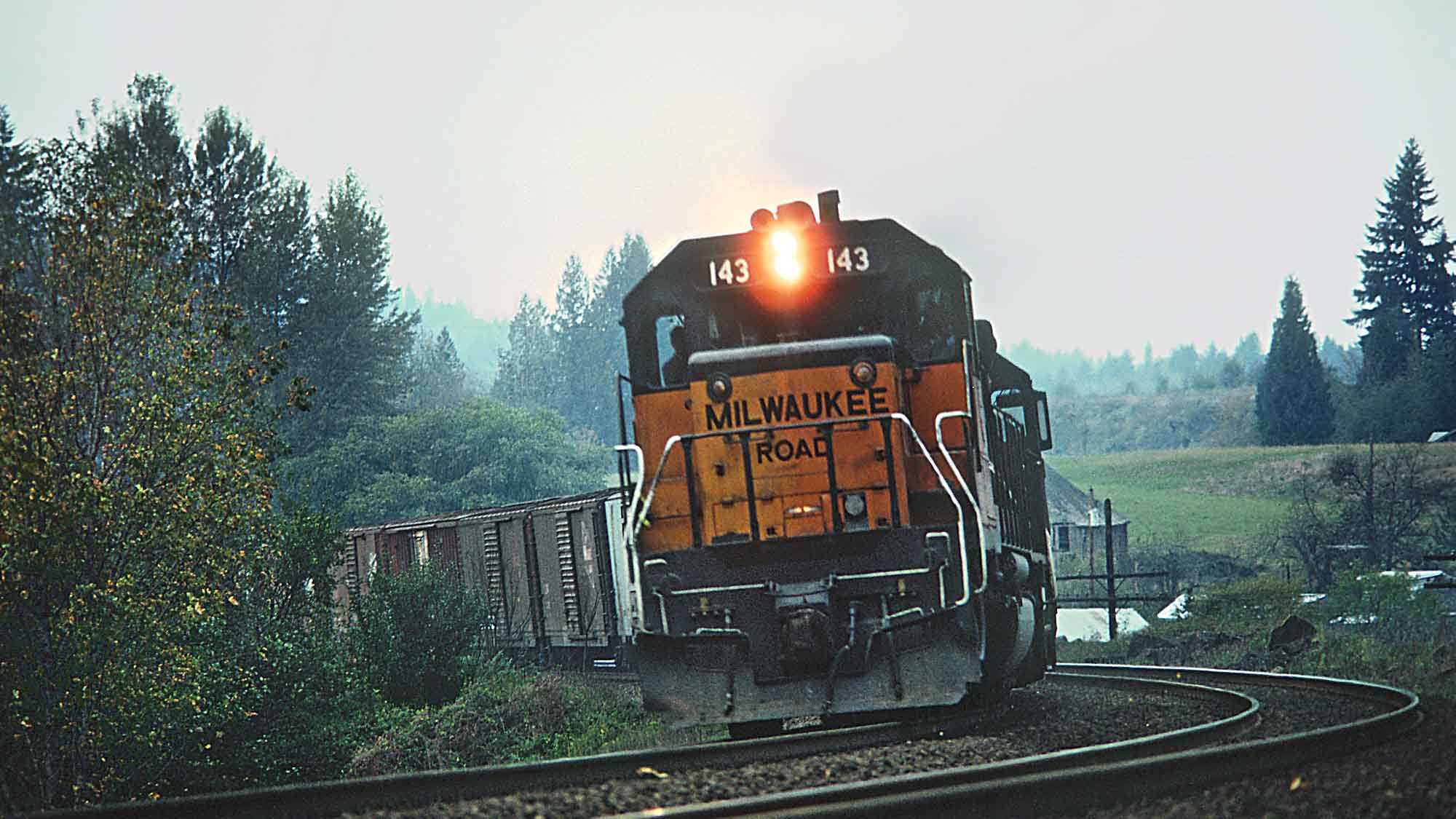 MILW 143 southbound on the BN passing the Laughlin Round Barn built in 1883 north of Castle Rock, WA in October 1978. A Roger Puta Photograph. From the spectacular to the ordinary. US freight is captured just as well through Roger's lens as special steam and passenger services. 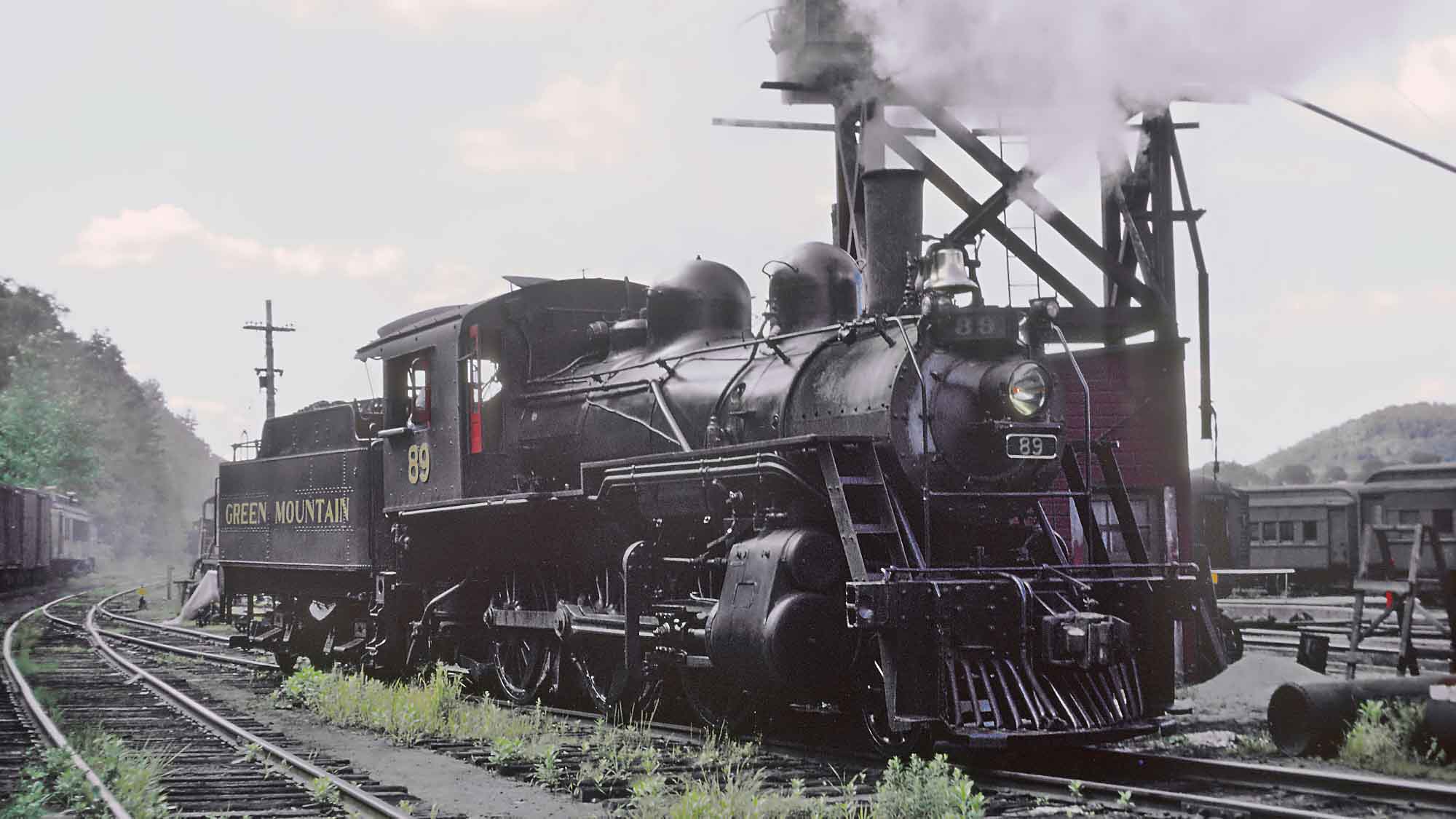 Green Mountain RR Strasburg 89, North Walpole Yard. A Roger Puta Photograph. Heritage was also captured by Roger. This locomotive, a fond favourite of its owner F. Nelson Blount, resided here in the 60s after been retired from service in the late 1950s. It was originally built in 1910 for the Grand Trunk Railway (as 1009).