Author Gary Dolzall has visited famed Horseshoe Curve many times over the decades and reflects on the experience.

Words and Photographs by Gary Dolzall

My first visit to the Pennsylvania Railroad’s magnificent Horseshoe Curve came in the form of a birthday present. I was a young teen, and my parents, succumbing to my constant pestering to visit the legendary place, loaded up our car and we traveled 500 miles from southern Indiana to Altoona, Pennsylvania. The time was August 1968, and the timing was fortuitous, for the Pennsylvania Railroad the prior February had merged with long-time rival New York Central to form Penn Central. But that notwithstanding, little had thus far changed on the Pennsylvania’s famed Pittsburgh Division, allowing me a first (and last) glimpse of Horseshoe in its traditional Pennsy dress.

During my first visit, and another the following summer, I had little idea that in the decades ahead I would visit the grand location numerous times. And I certainly never dreamt of the profound railroading changes to come – that Penn Central would fall to bankruptcy and be replaced by Conrail; that after a troubled beginning, Conrail would rise Phoenix-like to become a beacon of American railroading success; that an entity called Amtrak would carry passengers around the curve; that beautiful PRR K4 4-6-2 1361, which stood on display at the curve in my early visits, would one day be replaced by a Pennsy EMD GP9; and that, finally, a behemoth named Norfolk Southern would lay claim to American railroading’s most famous curve.

Across the United States, Canada, and indeed the entire world, there are many examples of instances where railroads have used a horseshoe-shaped trackage arrangement to lift their rails over steep terrain while maintaining a reasonable gradient, which was in fact the reason PRR’s great engineer, J. Edgar Thomson, marked out the curve at Kittanning Point in the 1850s. Such locations as Tehachapi’s magnificent Caliente horseshoe, Pritchard Creek Horseshoe on the Union Pacific in Oregon, Southern Railway’s “Loops” atop the Smokey Mountains in North Carolina, the Gilluly curves on the Rio Grande in Utah, Catara Loop on Southern Pacific’s Mount Shasta Line, and Canadian Pacific’s Jackfish Bay horseshoe in British Columbia are just a few examples to be found in North America. And yet, the fame of the curve standing below Kittanning Point, six miles by rail west of Altoona, is so renowned that to simply say the words “Horseshoe Curve” to a railroad enthusiast evokes one place first. And so it was with me.

Over the decades since my first visit to “Horseshoe,” I’ve had the joy of many visits and each, regardless of era, has been captivating and memorable, whether witnessing Pennsy Brunswick green SD45s climb the curve with piggybacks or today’s potent Norfolk Southern GE diesels lift unbelievable long and large double stacks up the daunting 1.85 percent grade of the Allegheny east slope (within Horseshoe Curve itself, the gradient is reduced to 1.32 percent to compensate for the tight 9 degrees of curvature). And yes, thanks to Amtrak’s Broadway Limited, I had the opportunity on several occasions to “ride the curve” as well. Perhaps the biggest change to my experiences has simply been one of personal exploration. In those early visits as a teenager, I was happy to witness the action right at the curve (whether from the adjacent park or hiking a bit around the hills), whereas in later years I explored the environs further … venturing to remote and famed MG Tower, to the summit at Gallitzin and its tunnels, to Cresson, and to historic South Fork.

Given the limitations of space, and this being a reflective piece, I’ll limit the following images to my earliest visits to the curve, and to my favorite, which occurred in October 1988 when Conrail was at its zenith and the Allegheny Mountains were ablaze in fall foliage colors under a magnificent blue sky. But rest assured, the experience today is no less enthralling – and now one can ride a funicular to the park at the apex of the curve, a rather more relaxed endeavor than racing up (dare one miss a train) the 194 steep steps with camera in hand that my earliest visits required! 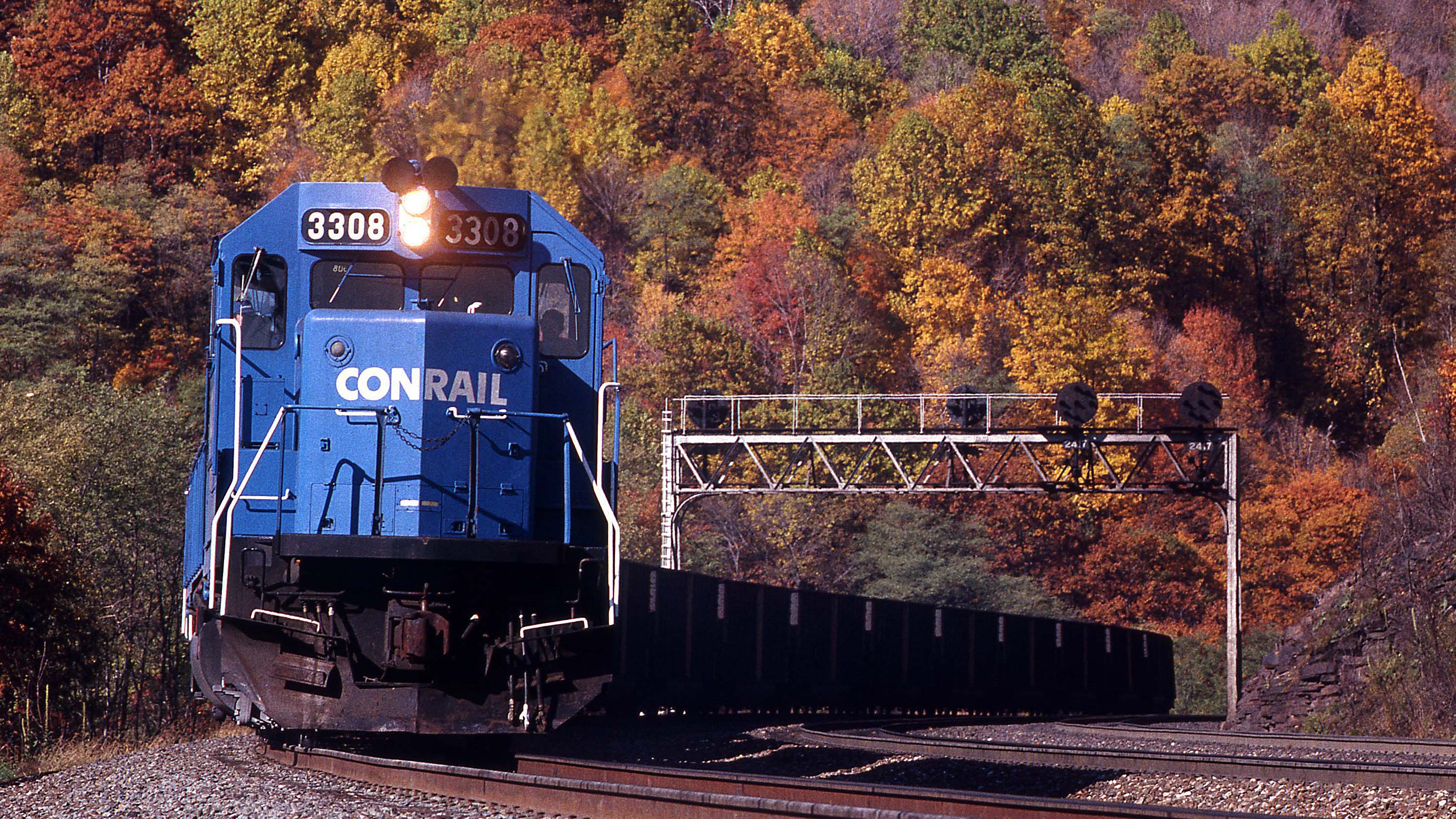 Magnificent Horseshoe Curve! Against an absolute blaze of fall foliage in October 1988, Conrail EMD GP40-2 3308 is swinging about the east leg of the legendary curve as it descends the Alleghenies with a heavy coal train. The Pennsylvania Railroad heritage of the famous line is recalled by the signal bridge and distinctive PRR-style position light signals. 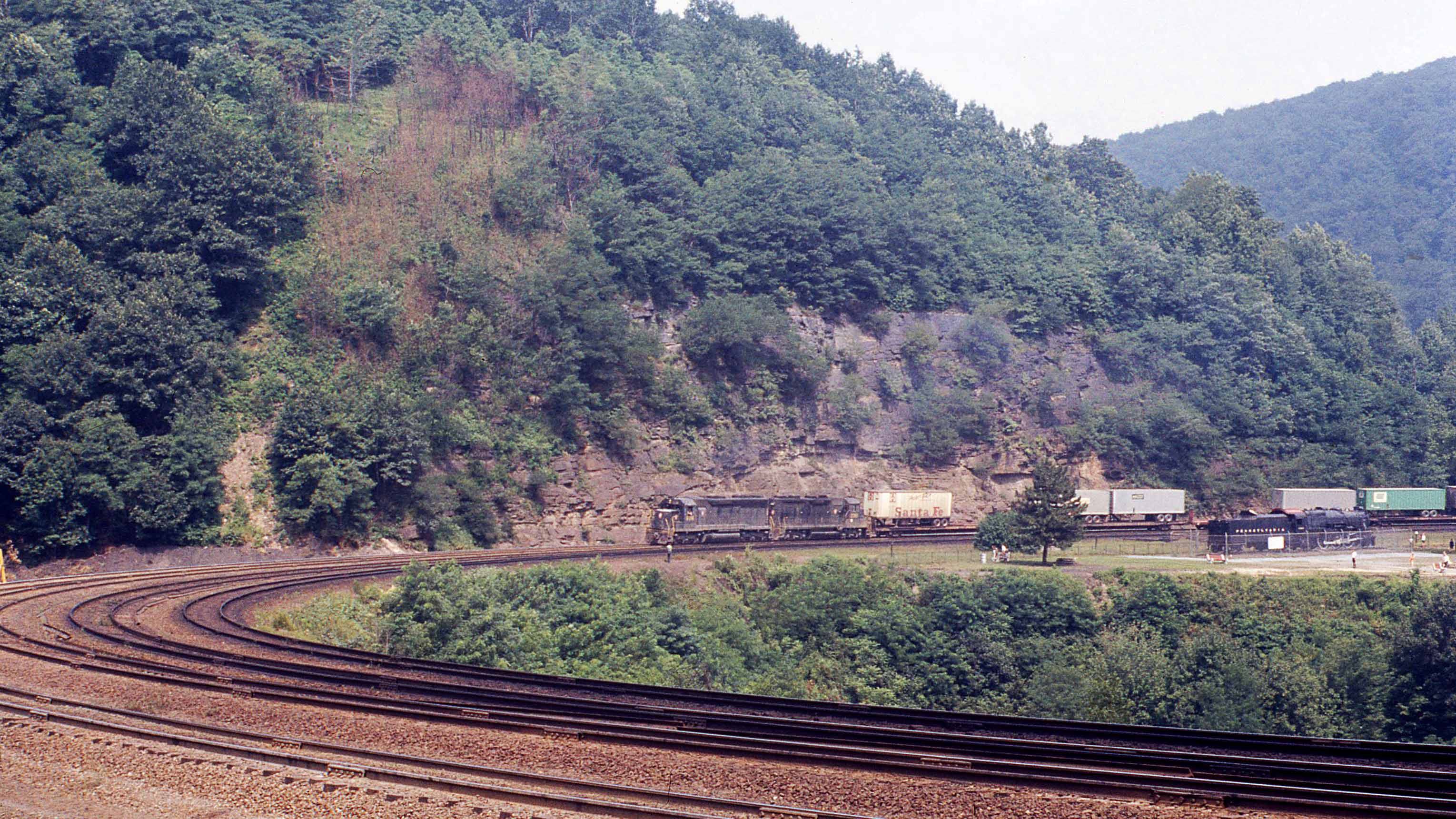 I have visited Horseshoe Curve numerous times over the decades, the first visit being a 1968 birthday present visit as an early teen. In a scene recalling the long tenure of the Pennsylvania Railroad, EMD SD45 6186 and GP35 2361 lead a piggyback (“trailer train” in Pennsy terminology) through the apex of the curve and past PRR K4 4-6-2 1361 standing vigil in the park (above). As the duo of EMDs curled up the west leg of the curve, I switched to my old, sturdy (and heavy) 4x5 press camera to take a black-and-white image (below). 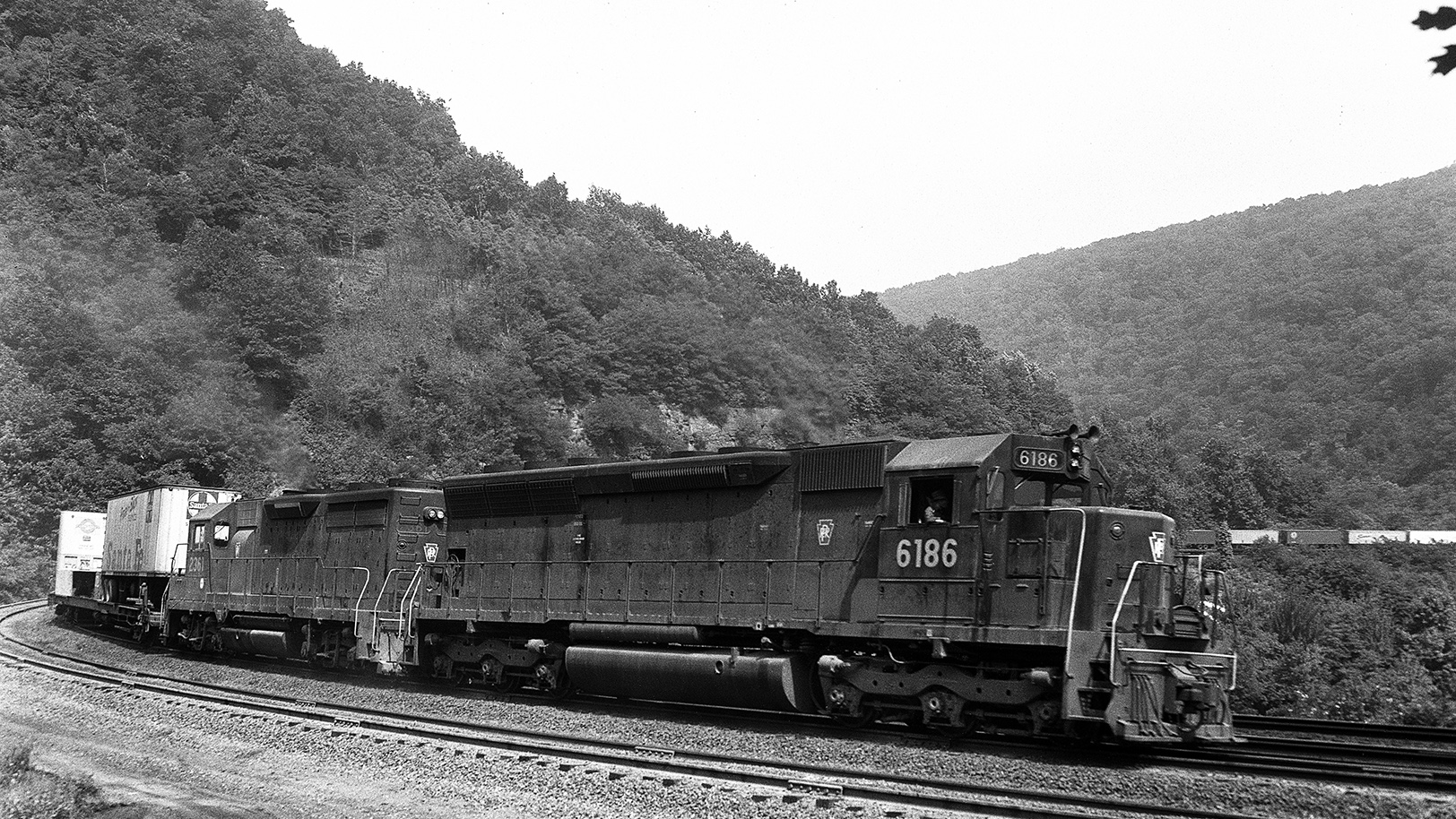 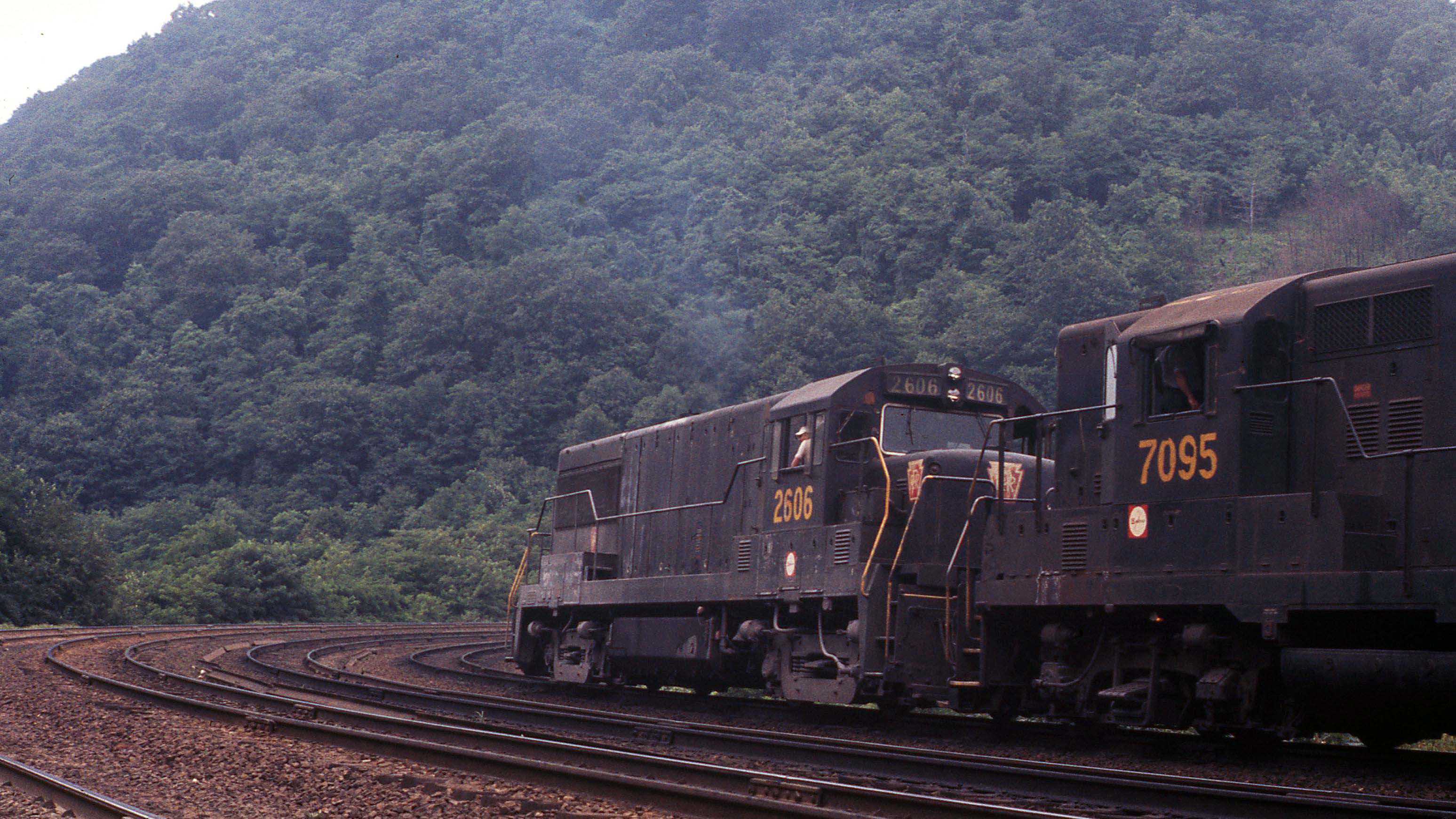 The Pennsylvania Railroad (and then Penn Central) operated a simply extraordinary menagerie of diesel locomotives, but even by PRR standards, the site of a Brunswick Green PRR General Electric U25B (running long hood first at that) teaming up with a Pennsy Electro-Motive GP9 to bring a freight down the curve was uncommon. 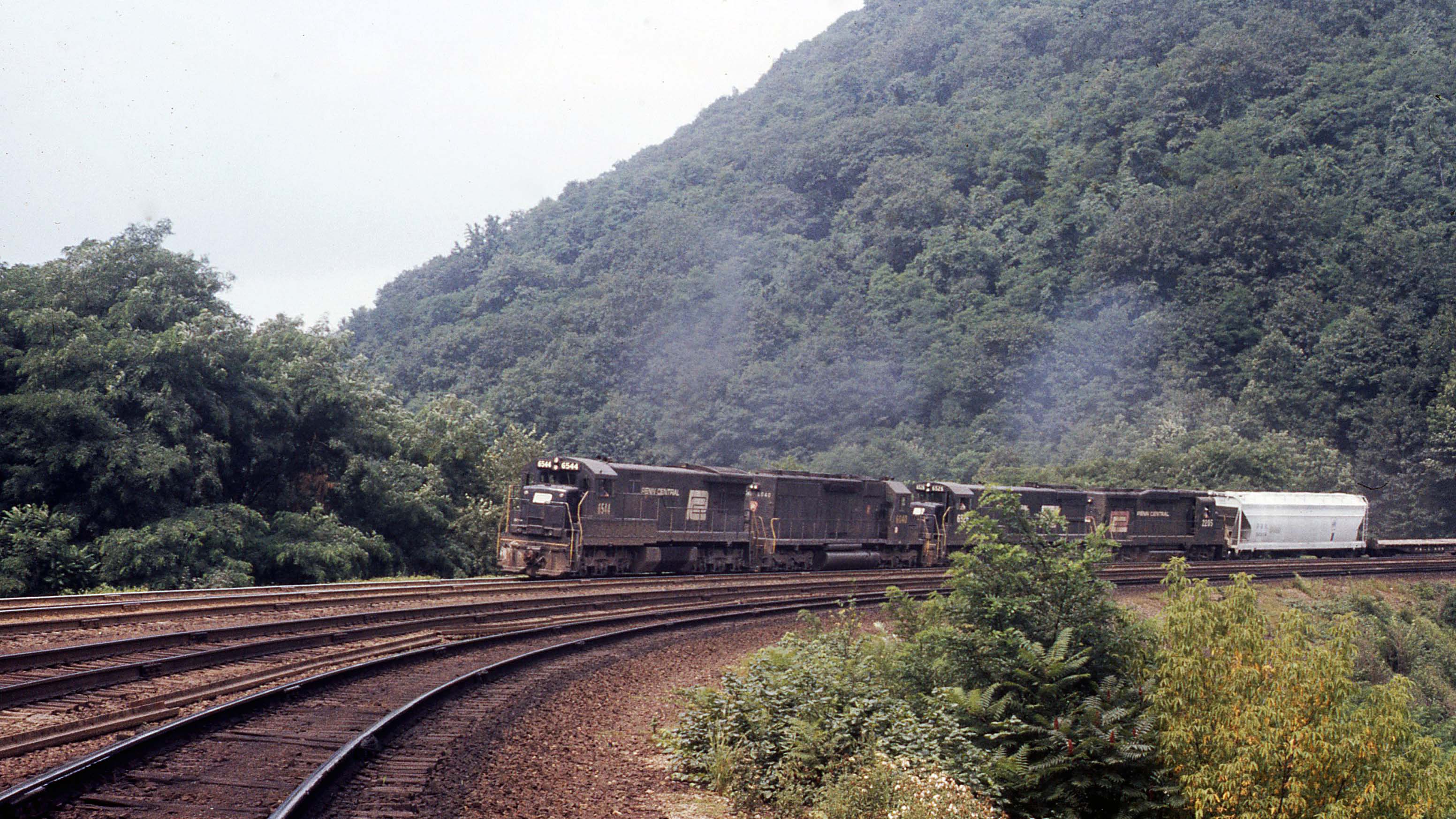 When I made my second visit to Horseshoe Curve – in August 1969 – the impact of the merger of rivals Pennsylvania and New York Central into Penn Central was on full display. Penn Central GE U33C 6544 is on the point of a manifest climbing through Horseshoe Curve. The U33C had been ordered by the Pennsylvania shortly before the merger and was delivered in PC livery. The last unit in the fascinating lash-up, an EMD GP30, wears the relatively rare version of the Penn Central logo with a red “P.” 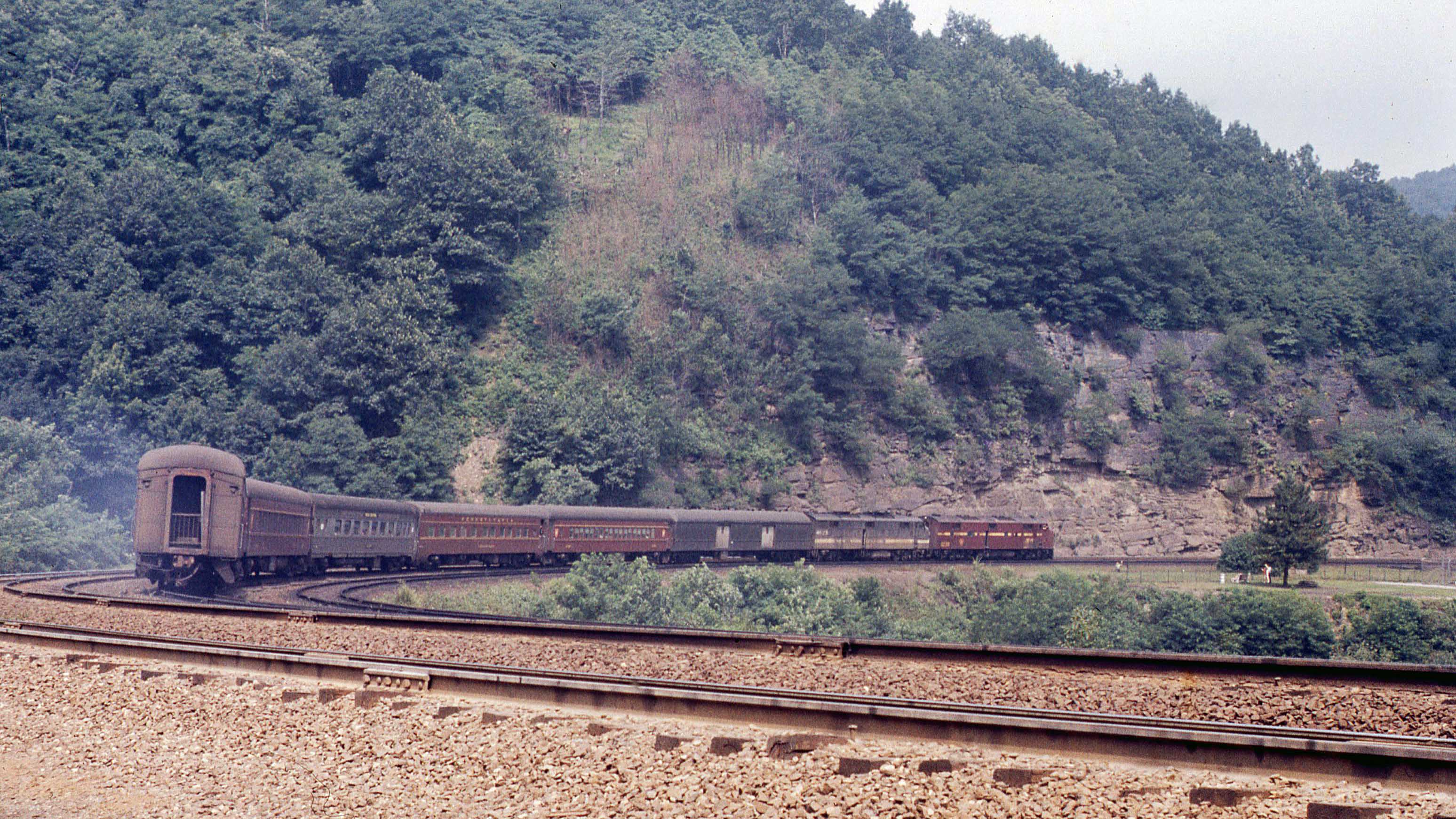 The early days of the Penn Central merger made for sometimes strange bedfellows, and such is surely the case in August 1969 as EMD E7s dressed in Pennsy and New York Central colors lead eastbound Train 54 through the curve. Barely visible in the distance, that’s my father, who kindly drove me 500 miles for the visit, at the park exchanging waves with the train’s engineer. 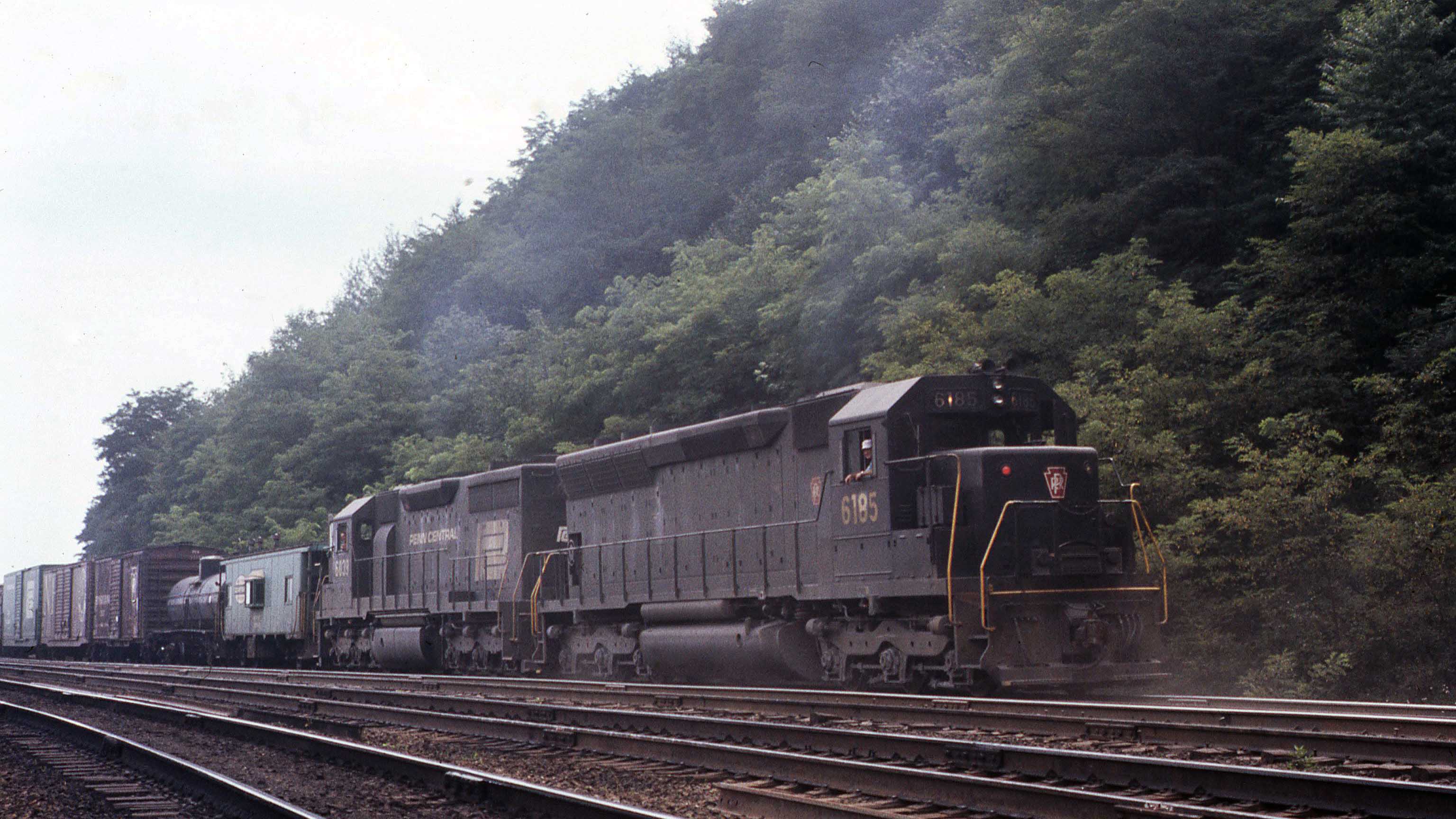 A captivating part of train-watching at Horseshoe Curve has always been the helper operations, an experience that included witnessing rear helpers howling at full throttle and spitting sand as they pushed trains upgrade, then almost silently dropping back down to Altoona for their next assignment. The red class lights of PRR SD45 6185 are alight as it and a PC SD40 shove hard on an ex-New York Central bay-window caboose (above), and another set of helpers – both burly EMD SD45s – drop down around the curve bound for Altoona (below). 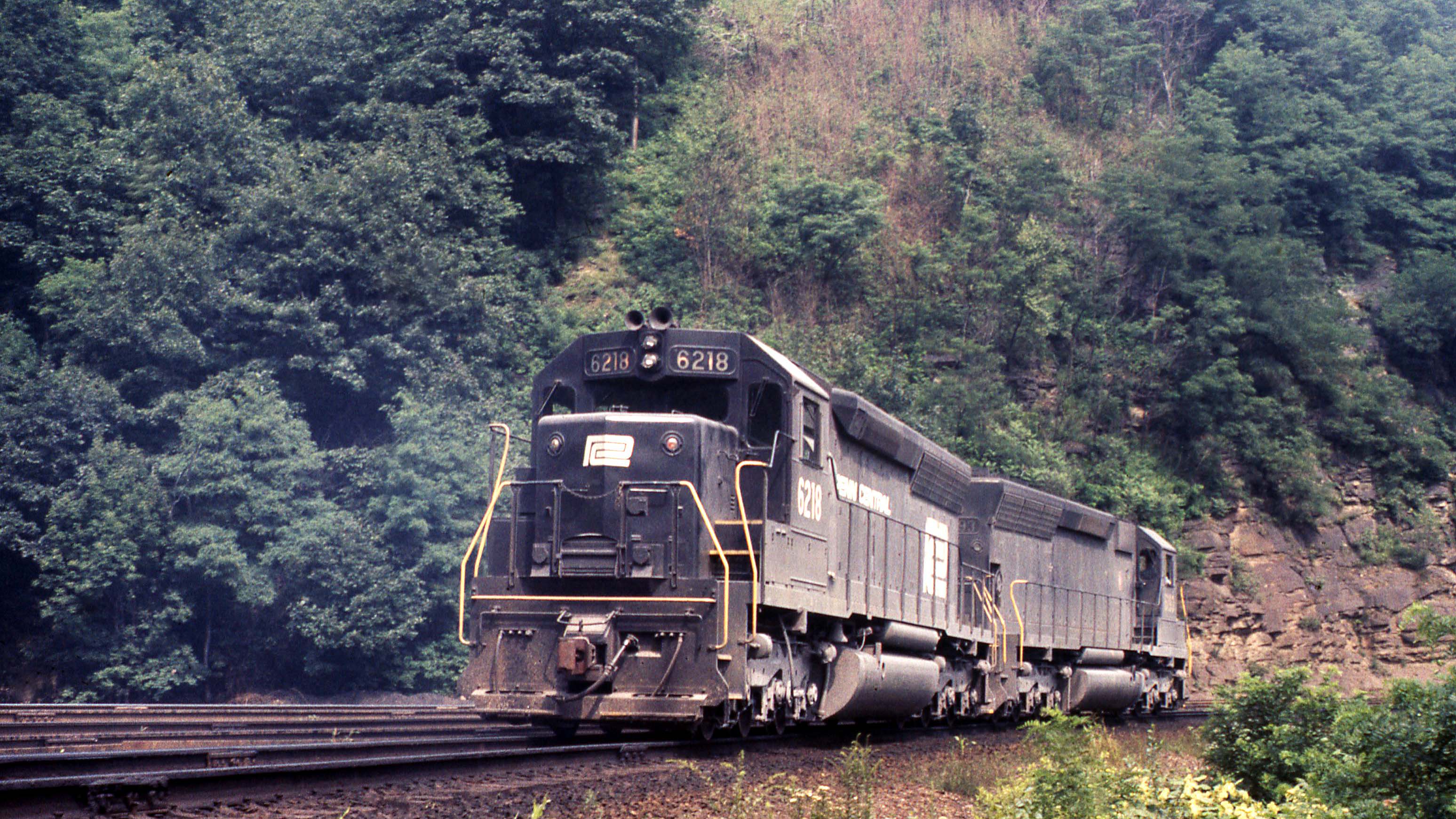 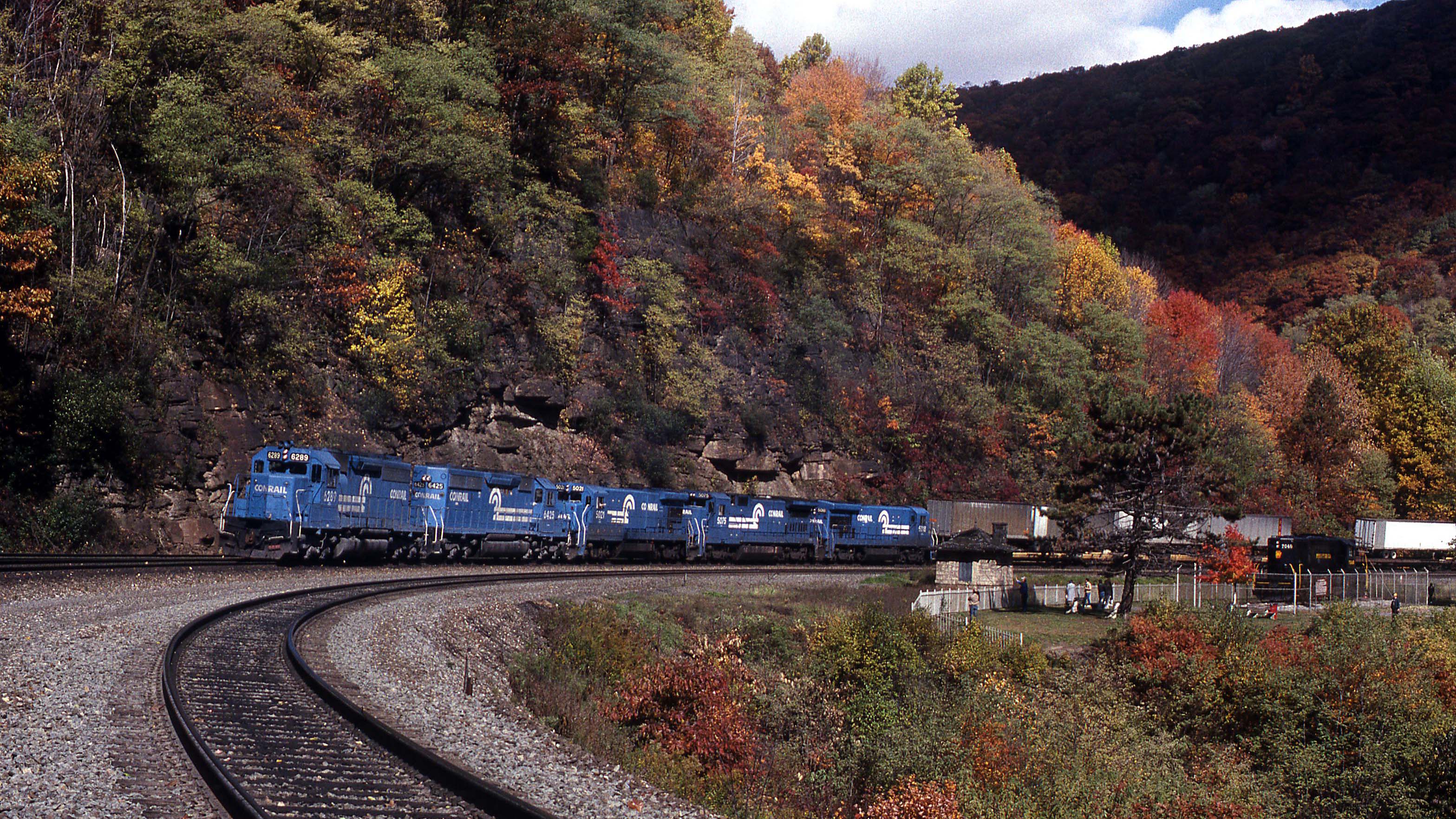 Fast forward two decades – to 1988 – and a Conrail piggyback climbs around the curve with a pair of EMD helpers placed on the head-end of the three GEs serving as road power. Conrail blue has replaced Penn Central black, four tracks have become three, and Pennsylvania Railroad EMD GP9 7048 stands in the place of PRR K4 1361. The K4 was removed from the park in 1985 for restoration and served a brief term in excursion service; it is currently undergoing another restoration for future service. 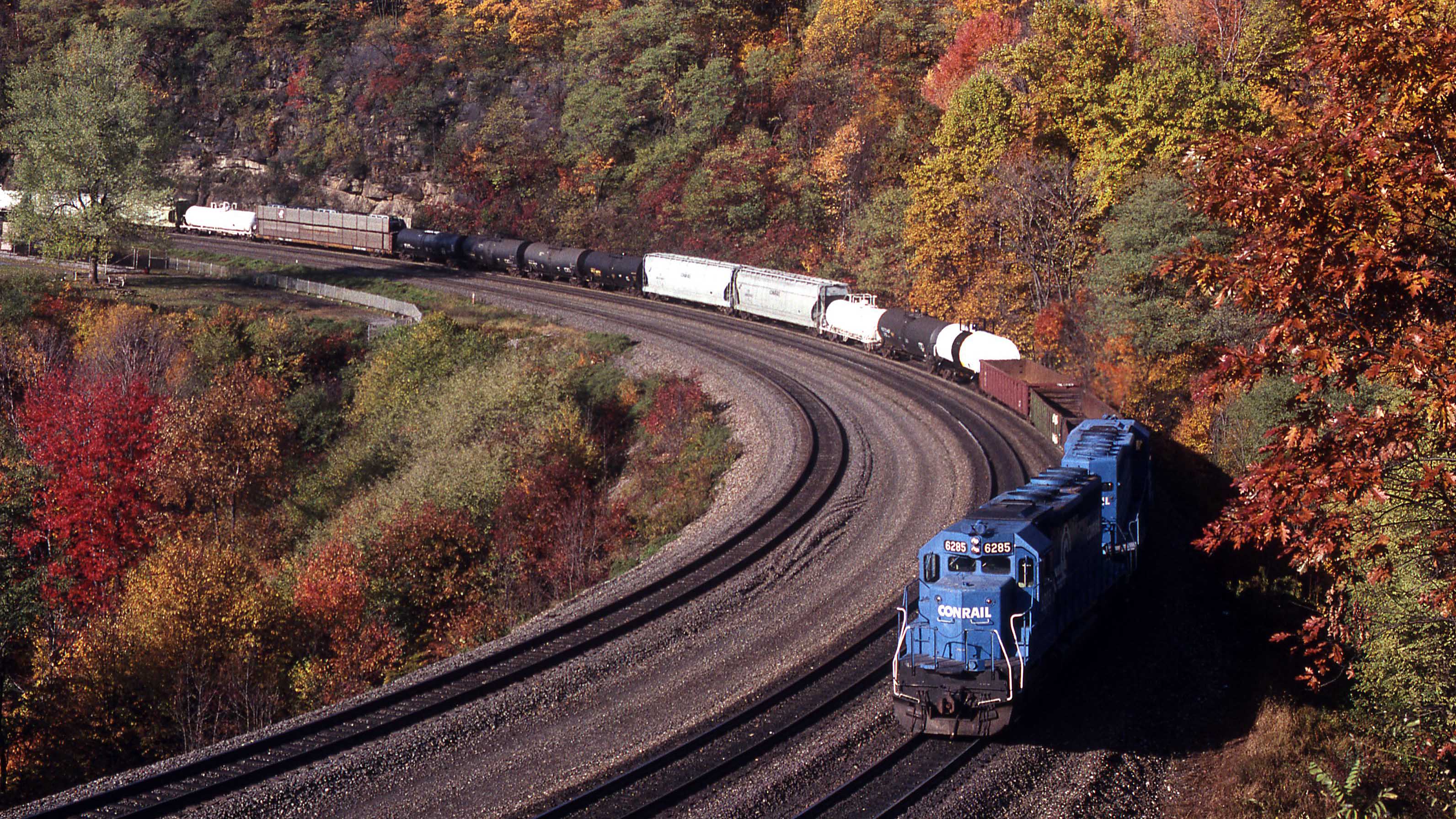 Among my many visits to Horseshoe Curve, a visit in October 1988 amid absolutely brilliant fall foliage and under blue autumn skies is a favorite. Conrail SD40 6285 and a sister are shoving hard on a westbound manifest; remarkably, the veteran SD40 began life serving the Central Railroad of New Jersey (Jersey Central Lines) more than two decades prior to this photograph. 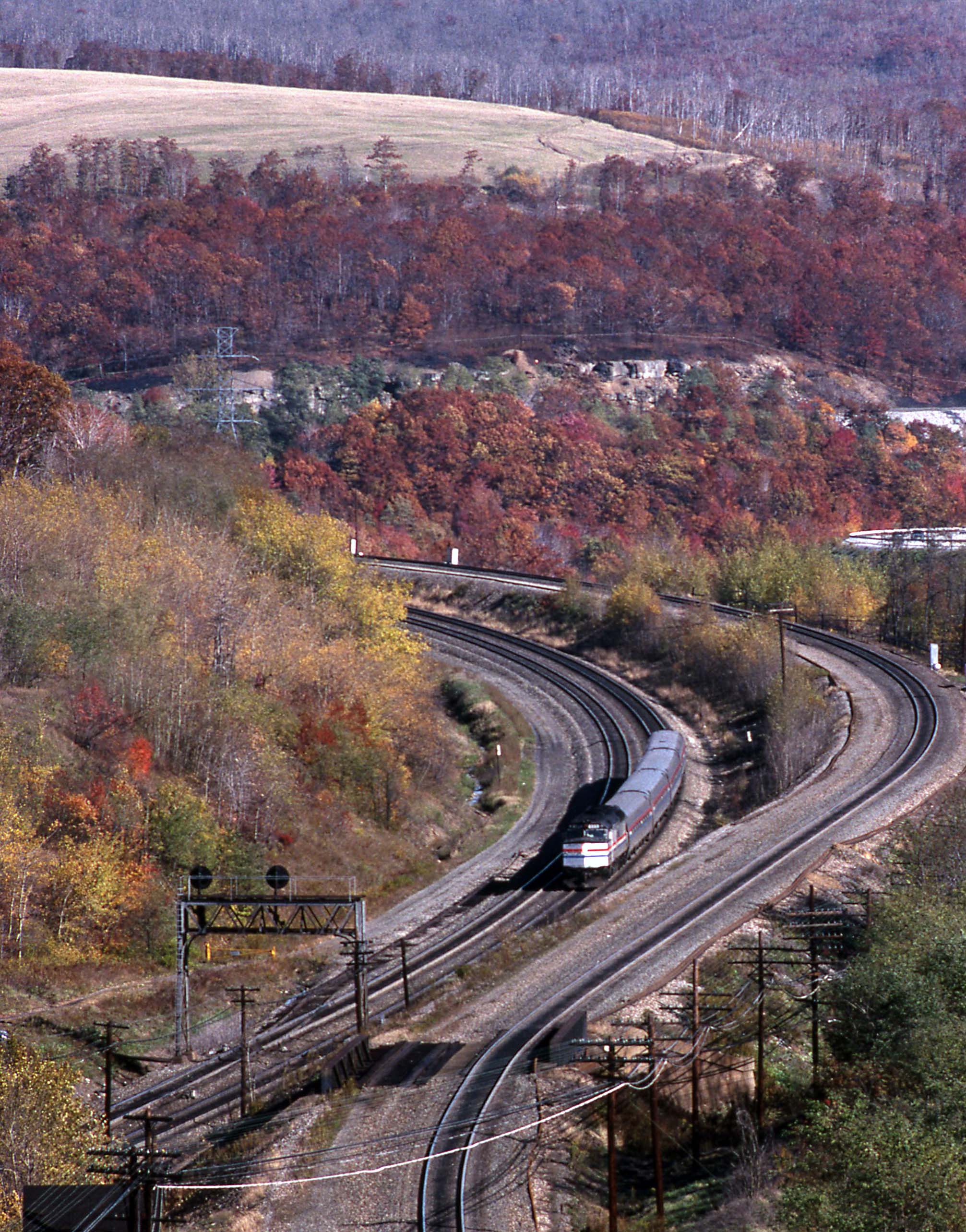 In my earliest visits to Horseshoe Curve, I wandered little from the famed curve itself, but in later years explored more fully the grand sites of the railroad’s crossing of the Alleghenies. In an October 1988 photo taken from the summit at Gallitzin, Amtrak’s Pennsylvanian is dwarfed by the mountains. The track on the right, used primarily for eastbound trains, is nicknamed “The Slide” and is the steepest trackage on the east slope with a gradient of 2.28 percent (above). At Gallitzin, Conrail SDs have emerged from Allegheny Tunnel. Since this photo was taken, the bore on the right has been enlarged and double-tracked and the bore on the left closed. Change on the railroad is a constant, bur regardless of era, Horseshoe Curve is unforgettable. 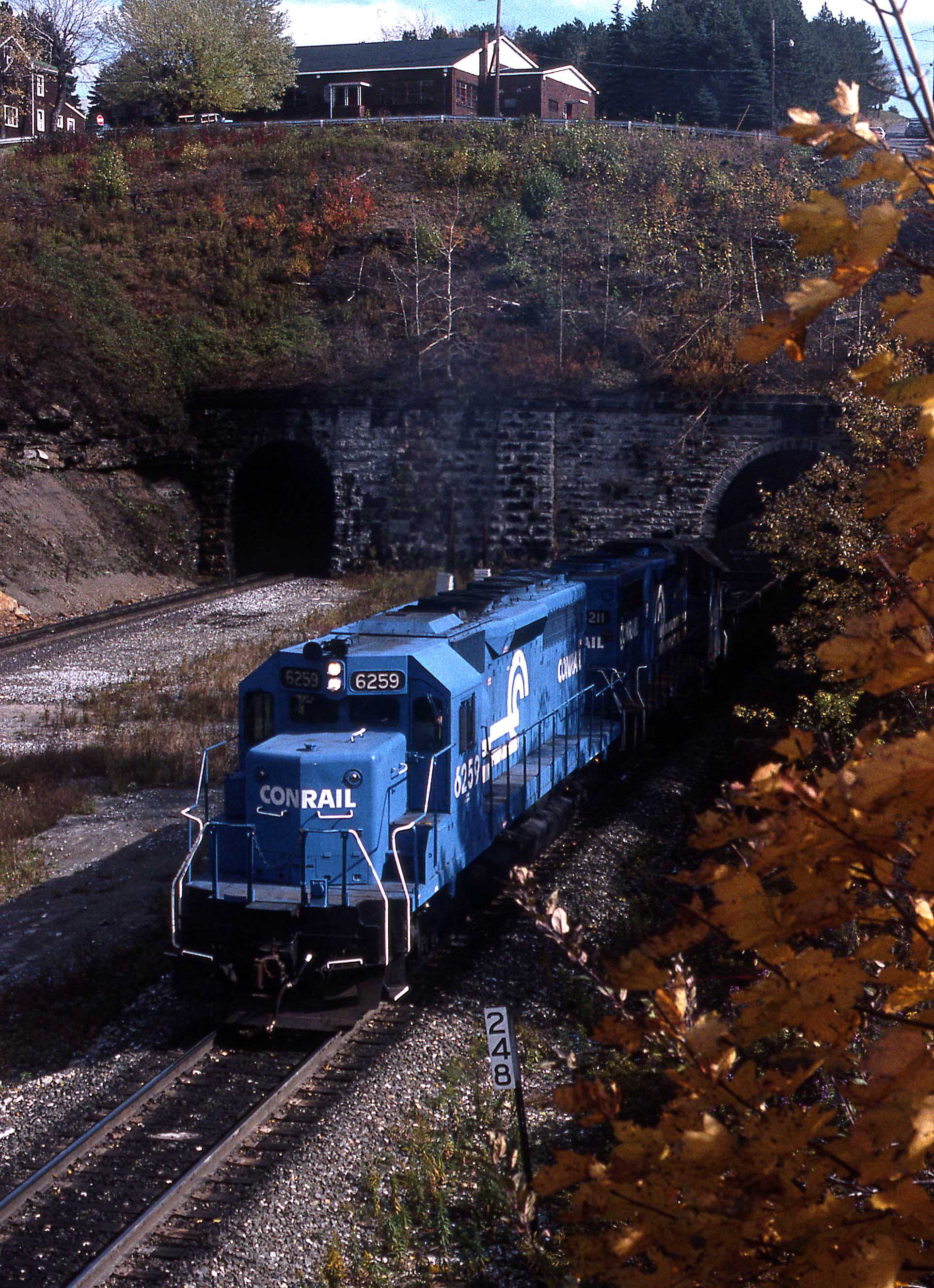