Raised in the American Heartland, author Gary Dolzall recalls, and shares, the compelling spirit of its railroading.

Words and images by Gary Dolzall

Railroading in America’s Heartland: It calls to mind small, comfortable towns and miles of open, rural country under a brilliant blue sky, fields dressed in the plantings of spring or the harvests of autumn, and yes, steel rails, sometimes mirror-bright and humming with the passing of endless trains, other times a bit uncertain and rusty, but always stretching away to the distance.

“America’s Heartland” is a term that can be defined either by geography or by spirit. On a map, the Heartland is most often considered the Upper Midwest of America, stretching from Ohio to Kansas, from Minnesota to Missouri. The region’s great cities, and there are many, notwithstanding, it is a part of the nation bonded together by its rural nature, its rolling farmland, and its warm, often friendly spirit.

I was born and raised in the Heartland – in Indiana – and thus to me it has a special calling and the feel of home, a touchstone that is little changed by the fact I have long lived elsewhere. And as a lifelong railfan, railroading in the Heartland also, always, tugs at both mind and heart.

Like most everything, railroading in the Heartland is diverse – it can take the form of a long grain train gliding through the farmlands from which its cargo grew, a hot intermodal hustling on a transcontinental journey, the spirited passage of an Amtrak train, or a meandering short line local with but a handful of cars. If there is a single essence of Heartland railroading, it is of railroads serving the land, by hauling corn, wheat, soybeans, and other agriculture commodities from point of origin to market. This railroading – granger railroading if you prefer – is part of the fabric and history of the Heartland, and recalls railroads the likes of Chicago, Burlington & Quincy or Milwaukee Road, Rock Island or Chicago & North Western, Soo Line or Illinois Central. Today, in the era of giants BNSF and Union Pacific and Canadian National, et al., that connection between the railroads and the land is not in the least diminished. Each year, American railroads haul more than four million carloads of farm, food, and agriculture products.

For the train-watcher’s mind, such statistics are reassuring, and suggest that Heartland railroading is, and will remain, alive and well. And for the heart there are scenes as timeless today as in the past, of cows or horses munching grass in a field little caring about the passage of the daily freight, of standing alongside the high ballast and polished rails of a main line where the trains pass with an urgency quite unlike the leisurely pace one might discover at the nearby small town, of relaxing trackside on a summer day, listening to the chirping of birds and the rustling of corn stalks in the breeze, little concerned how long it may be until the next train appears. In the images that follow, I invite you to sample railroading in the American Heartland – and hope you, too, will discover that it does, indeed, call to the heart. 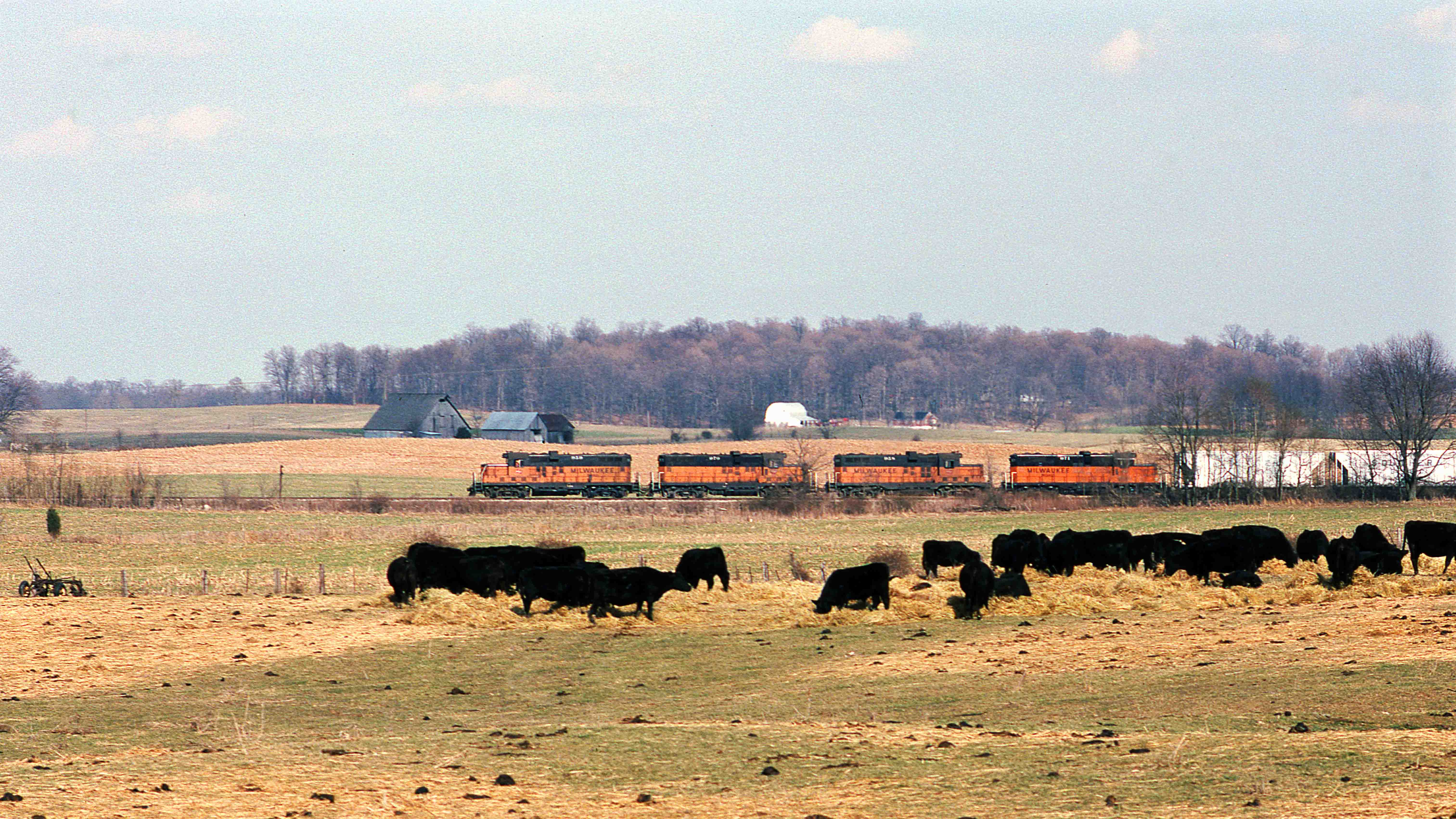 The timeless elements of railroading in the American Heartland – rolling fields, barns in the distance, grazing cattle, and a passing freight – all come together as a Milwaukee Road freight powered by a quartet of rebuilt EMD Geeps makes its way through southern Indiana. 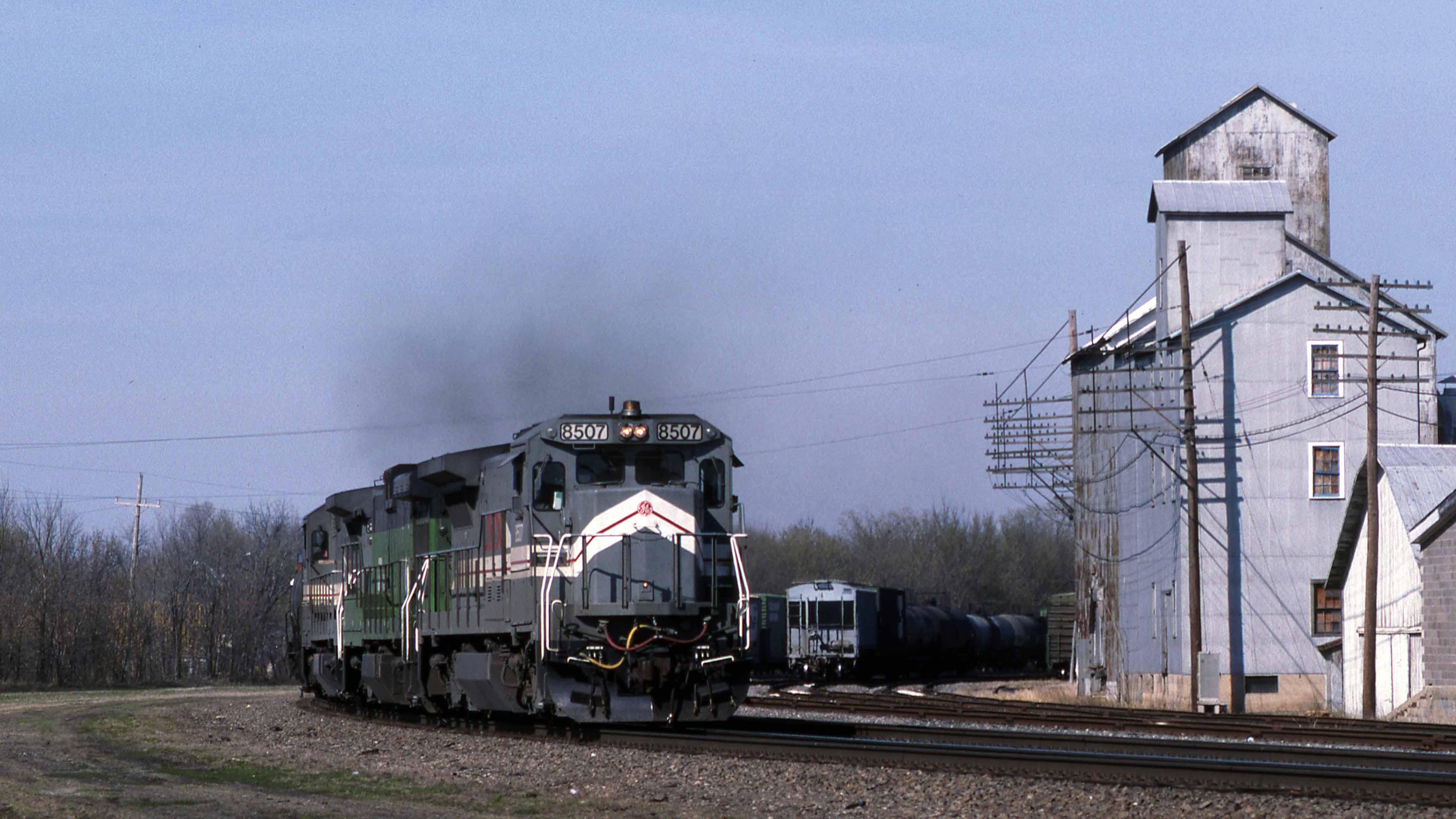 Burlington Northern train 161, led by LMX General Electric Dash 39-8 8507, curls its way past the grain elevator at Mendota, Illinois, in November 1988. The rails here once belonged to the Chicago, Burlington & Quincy (“the Burlington Route”), which was one of America’s greatest and most cherished “granger” railroads. 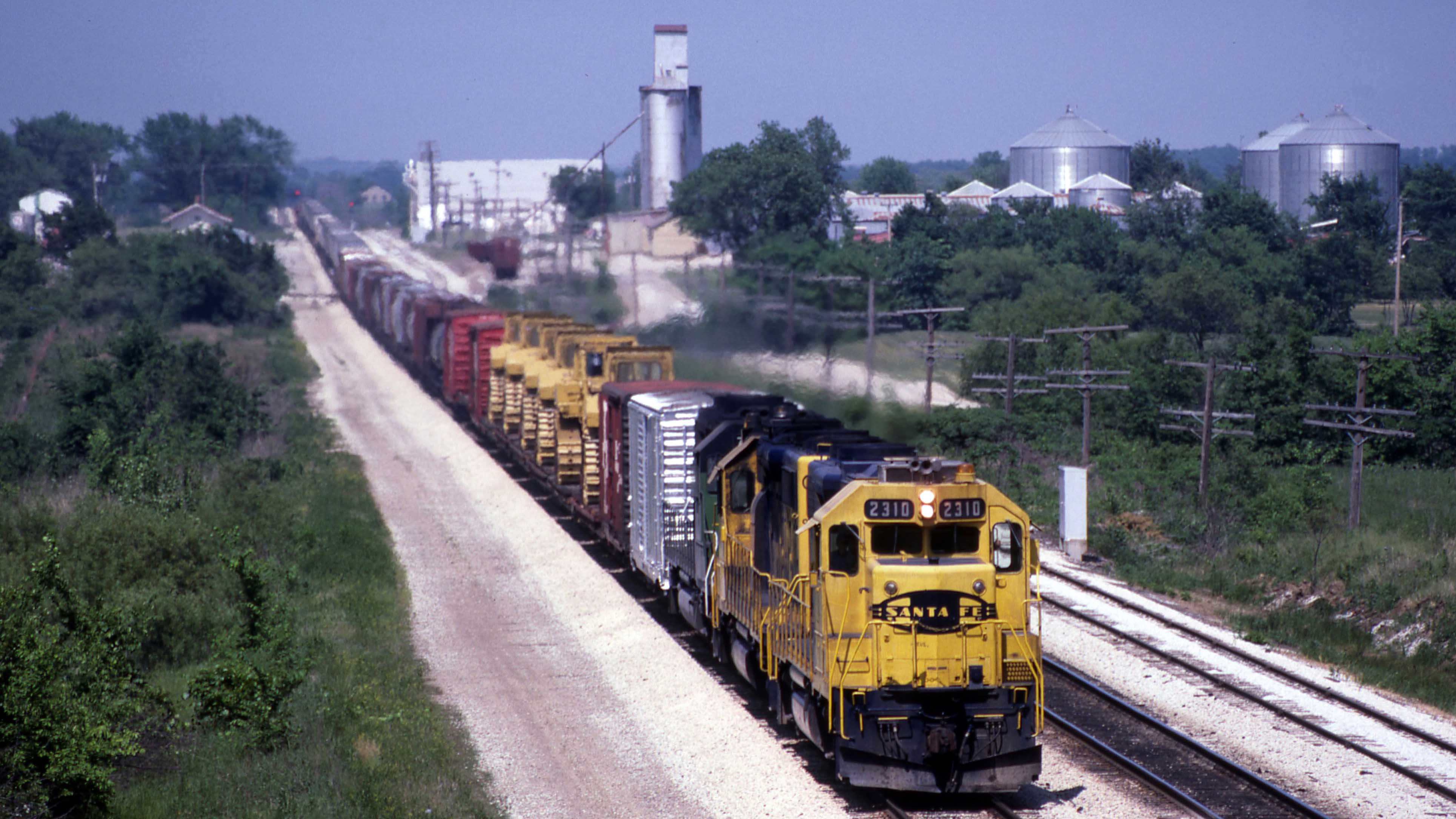 On a scorching hot May afternoon in 1987, Santa Fe EMD GP38-2 2310 rolls westbound past the grain elevators of Baring, Missouri. The scene is on the Marceline Subdivision of AT&SF’s legendary transcontinental main line route linking Chicago with the West Coast. 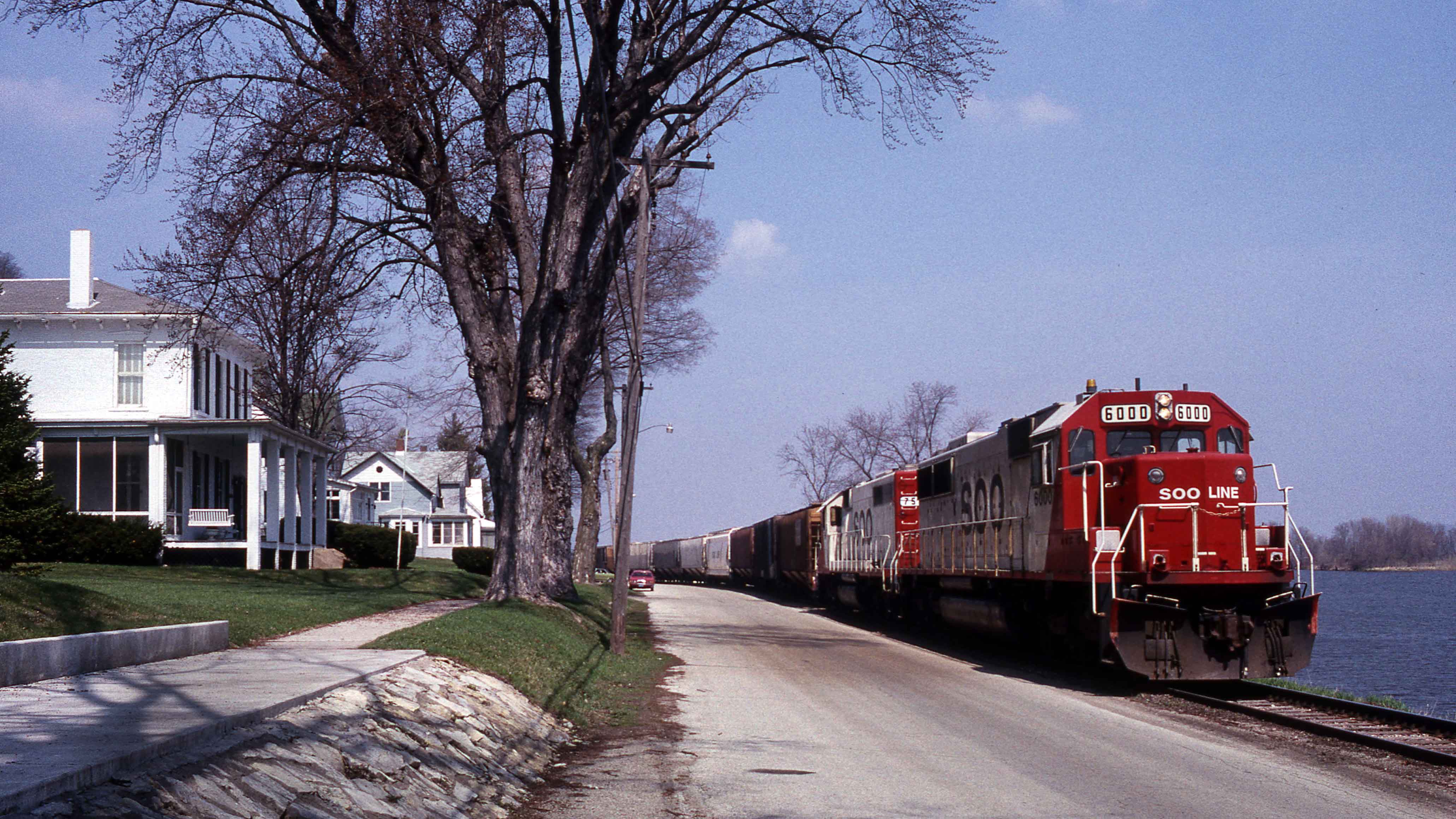 Sandwiched between lovely homes and the waters of the great Mississippi River, Soo Line EMD SD60 6000 and a sister lug a grain train south through Lansing, Iowa, in 1990. Today, this line, which hugs the west bank of the “Father of Waters,” is part of the Canadian Pacific Railway. 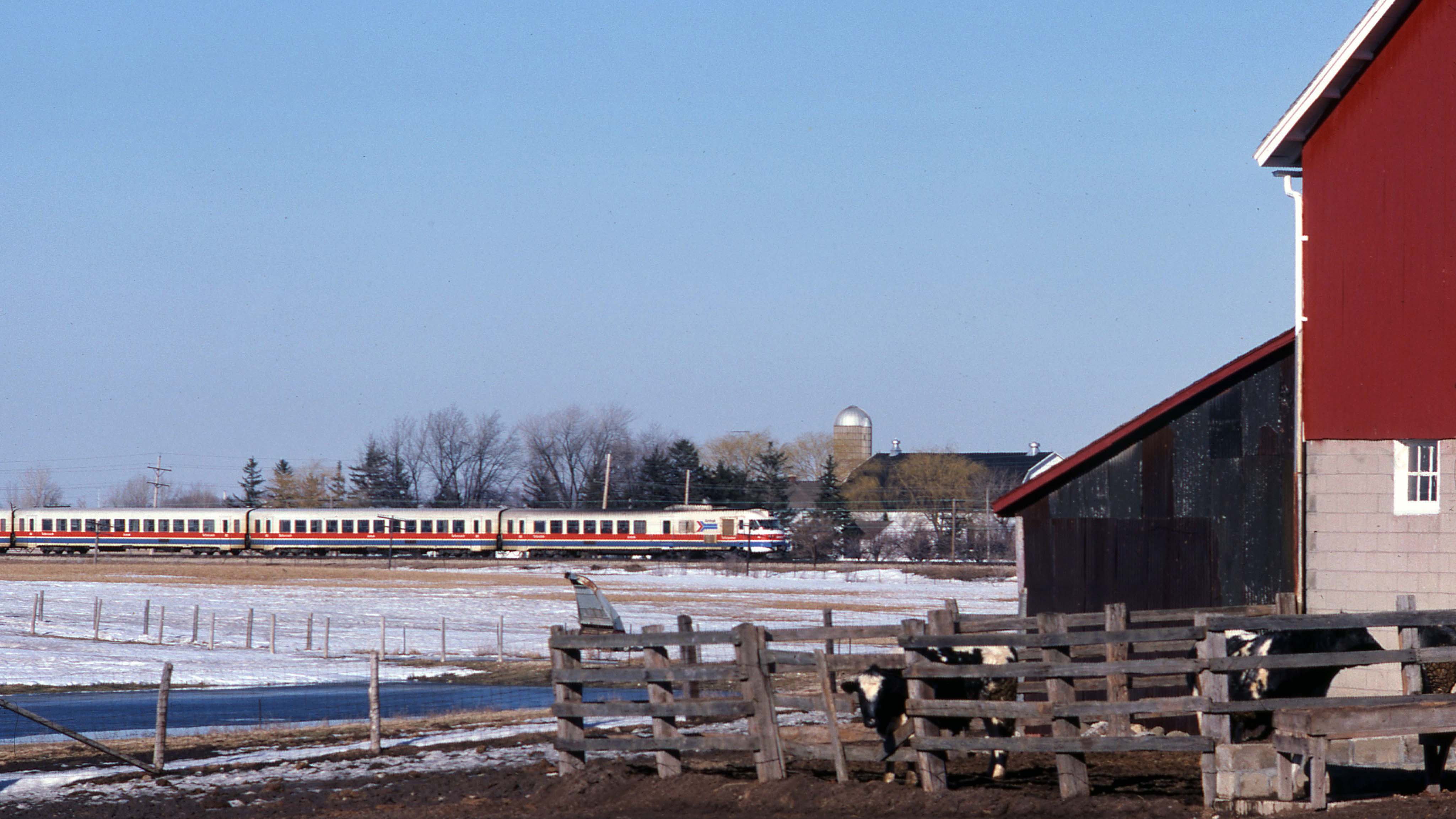 Surely a bit incongruous is this remarkable April 1978 scene of a French-built Amtrak Turbotrain racing through southern Wisconsin farm country near the town of Sturtevant. The cow seems to have found the photographer a more curious sight than the passing train. 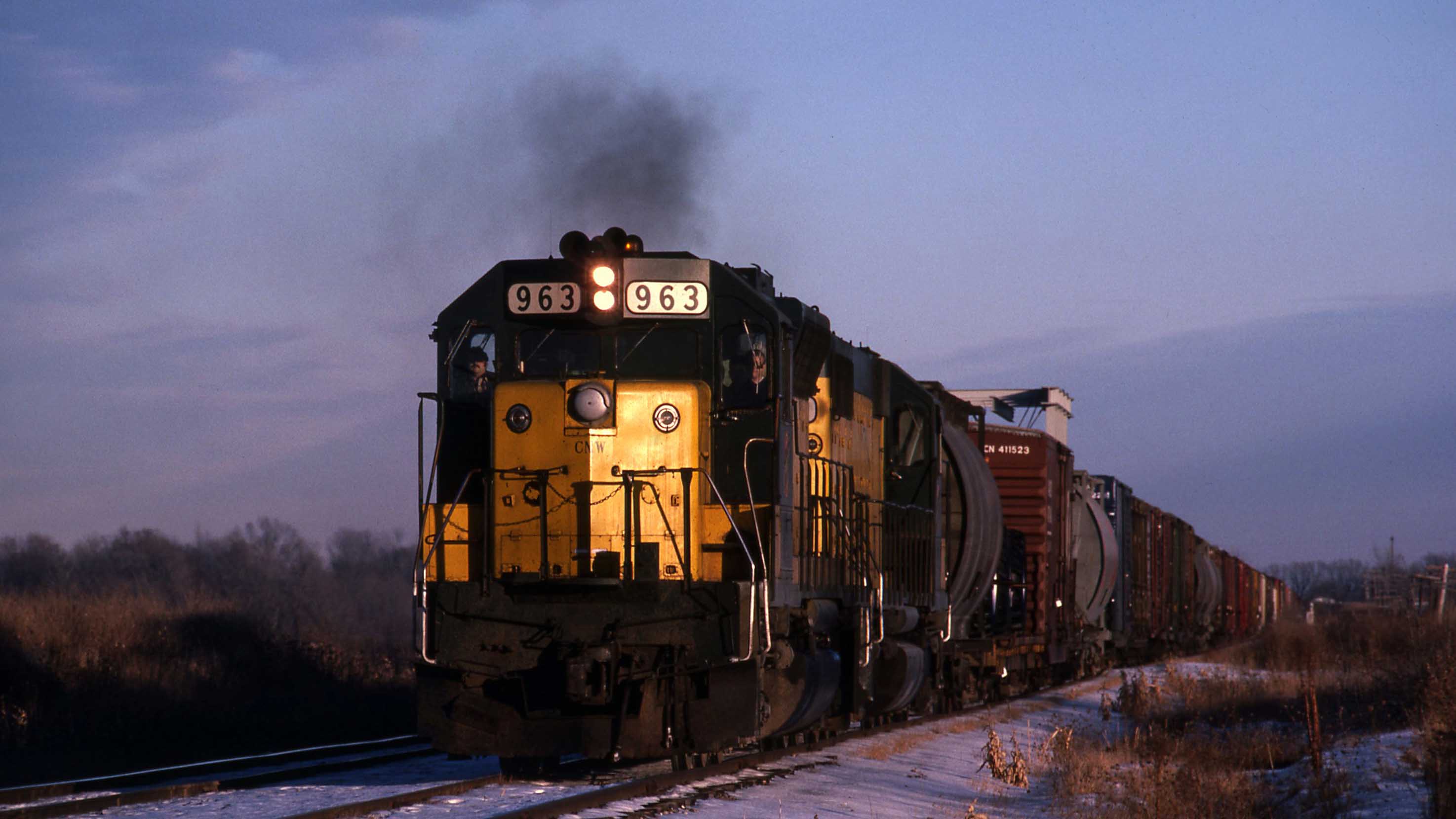 In the golden last light of a winter evening, burly Chicago & North Western SD45 963 leads a freight westbound on C&NW’s Adams Subdivision in central Wisconsin (above). That Heartland railroading can take on a verve and urgency equal to any is left in no doubt at 11:40 am on June 17, 1989, as a Conrail stack train blasts through Stryker, Ohio (below), on what was once the main line of the New York Central and the route of the renowned Twentieth Century Limited. 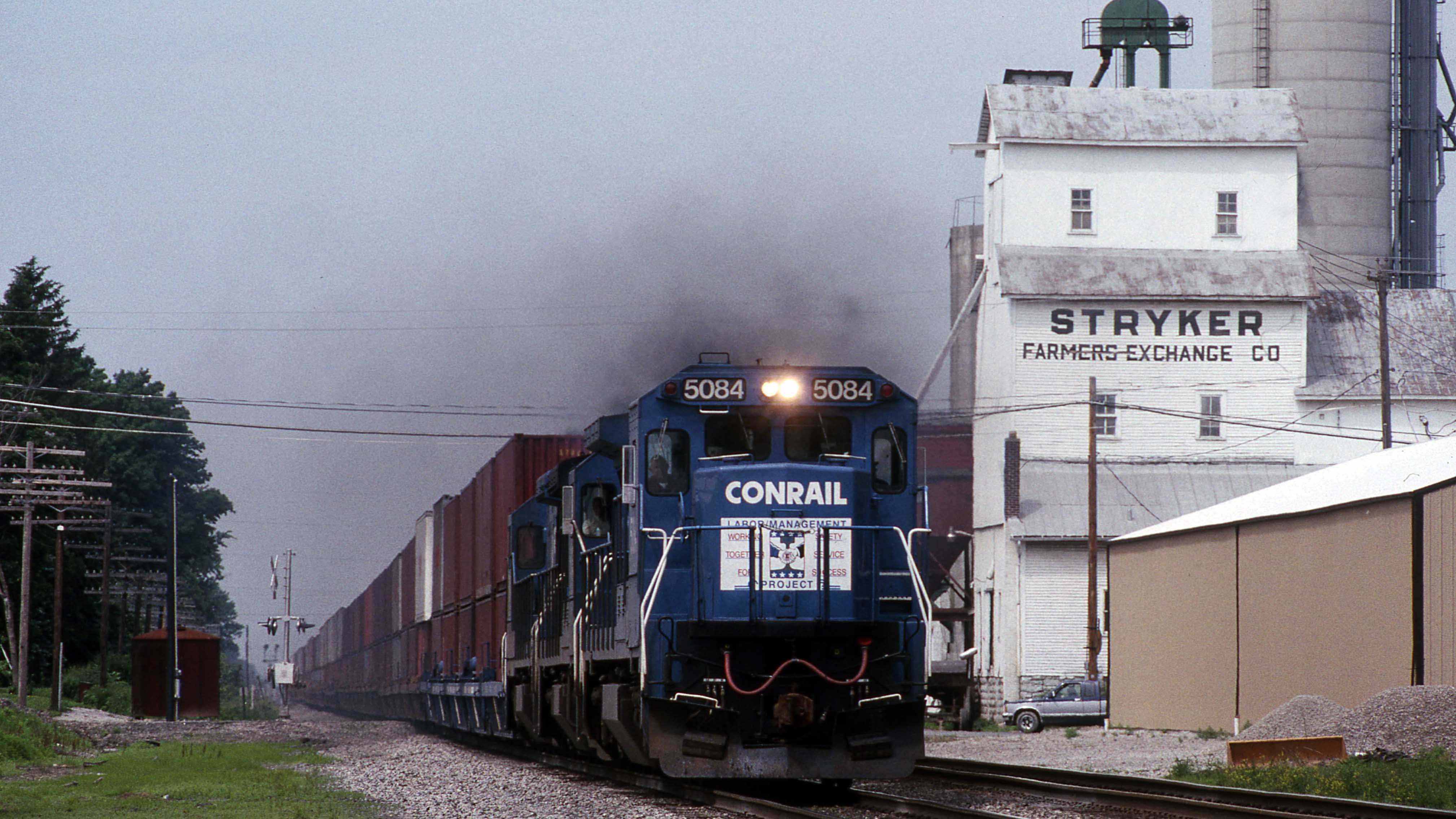 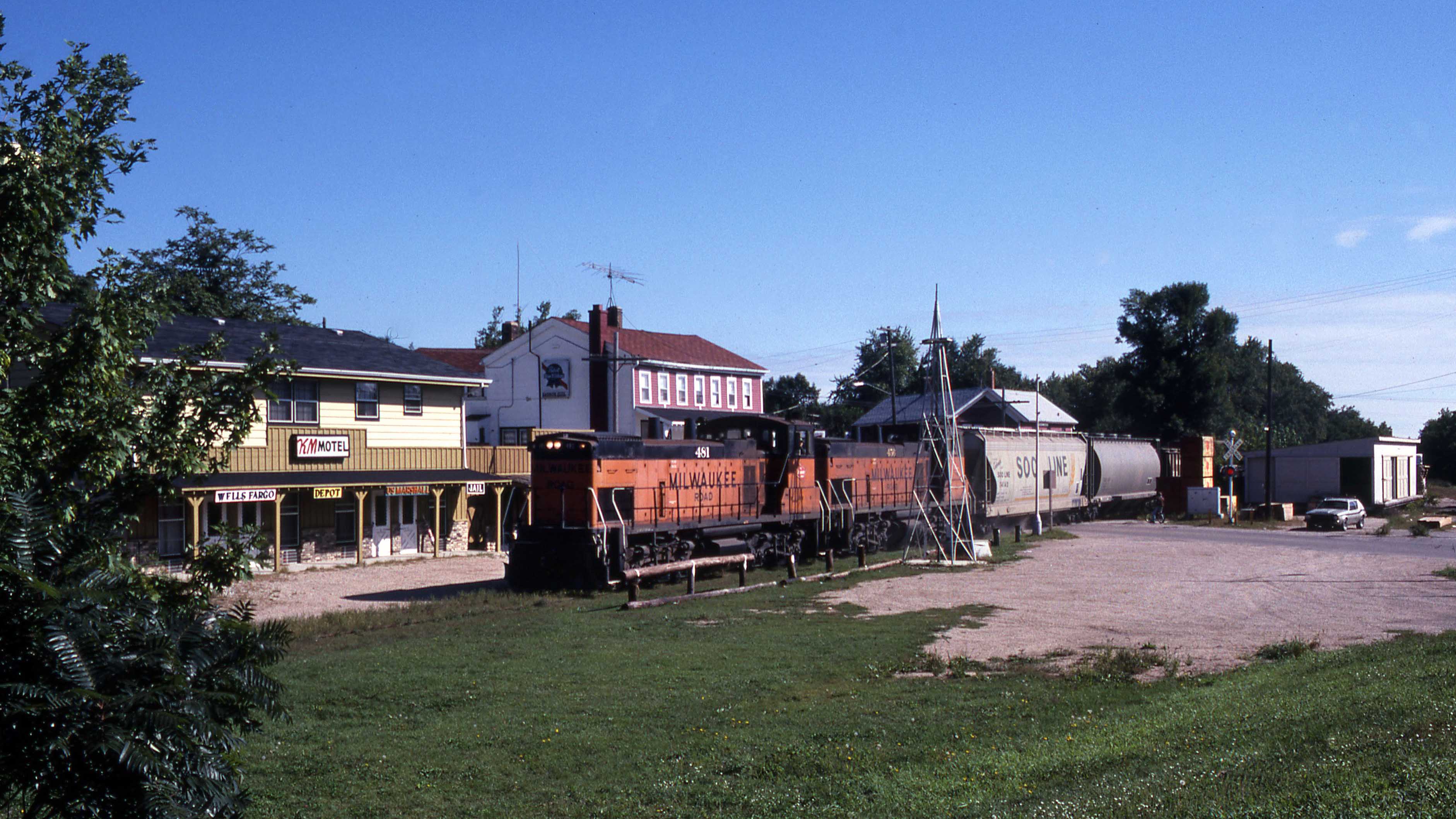 Small towns and seldom-used branch lines have always been a part of the enduring charm of railroading in the Heartland. In September 1979 at rustic Eagle, Wisconsin, a pair of Milwaukee Road EMD MP15ACs draw the grain cars of a westbound local over tracks barely visible in the summer grass. Surely, the diminutive KM Motel visible in the scene offered a close-up look at the line’s very-occasional passing train. Remarkably, this rail line lives on (and in better condition) today as part of the regional Wisconsin & Southern Railroad. 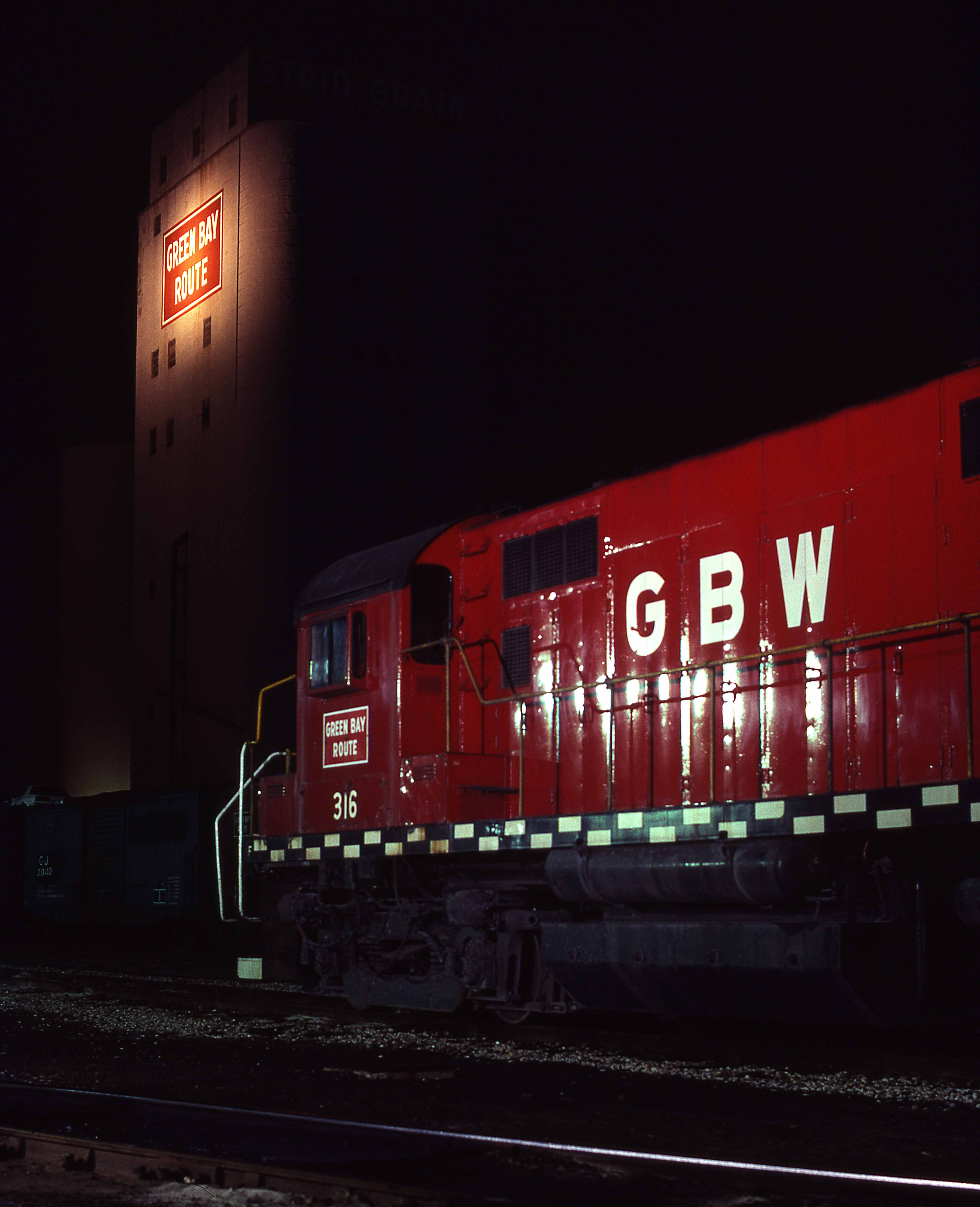 Another memorable day has come to its end in America’s Heartland as Green Bay & Western Alco RS27 316 shimmers in the lights of the Green Bay (Wisconsin) engine terminal as a giant grain elevator, bedecked with the railroad’s slogan, stands watch on an April 1978 eve.