Historic Trains and Trams of Mallorca

Last year, We Are Railfans collected a set of photographs from an anonymous railfan. These photographs depicted trams, buses and trains from across the globe and we displayed the first set of these from Cairo in a previous We Are Railfans article. Some were later displayed at an exhibition in the city, courtesy of the Egypt Exploration Society.

The next set we've chosen to share comes from the island of Mallorca off of the east coast of Spain. In the past, this has been a holiday destination for tourists elsewhere in Europe and many British holiday-makers will be familiar with its beaches, warm climate and historic locations such as Palma Cathedral and Bellver Castle. But though the island is only 3,600 square kilometres (comparable with somwhere like Rhode Island, USA) a number of railway routes work to ferry tourists and locals between major towns and the city of Palma. Of these, two are themselves historic and often serve also as tourist attractions.

As with other sets of photographs from this collection, they were thought to have been taken in the early 1990s and the cars in the background seem to tie in with this time period. If you have any suggestions as to when they were taken, or by whom, please get in touch! 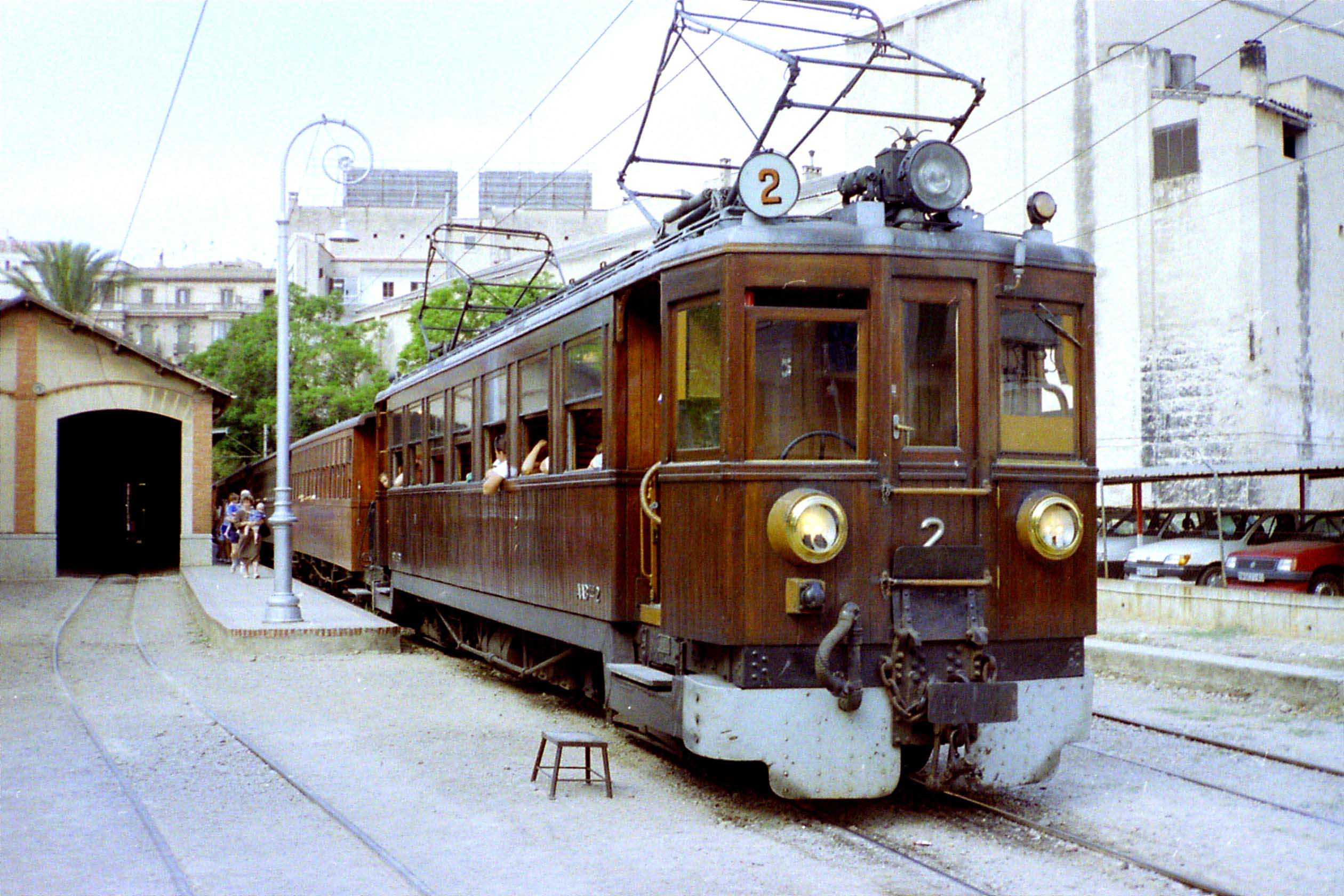 The origins of the Ferrocarril de Sóller lie in the orange and lemon trade and the railway line, connecting the island's city of Palma to the northern town of Sóller, was constructed back in 1911. The first two photos (above and below) depict the terminus at Palma, where a more contemporary railway also takes passengers to elsewhere on the island. 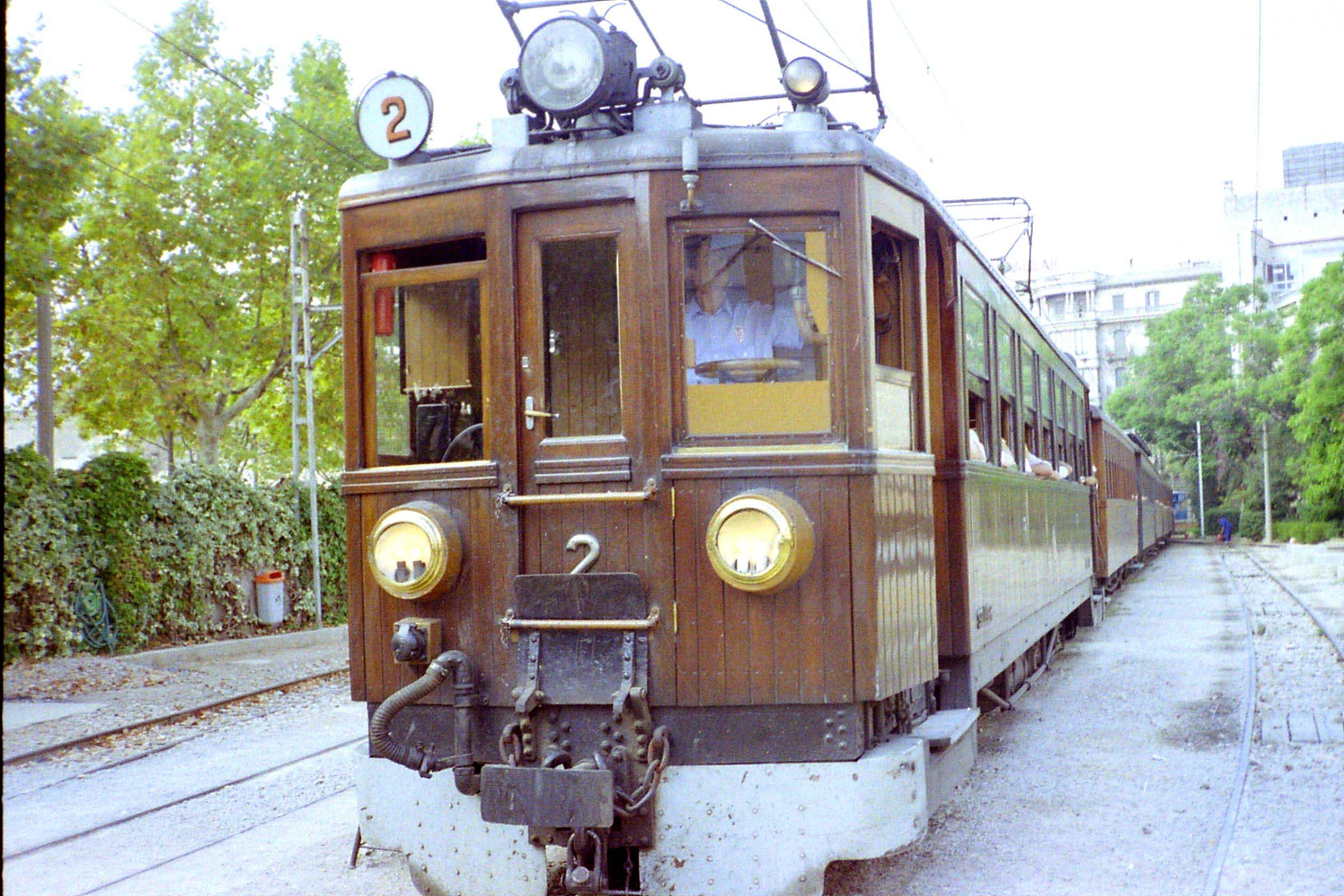 Official inauguration of the railway took place in August 1912, with locomotives nos. 1 and 2 present for the first service and no. 3 in motion shortly afterwards. They were manufactured by Maquinista Terrestre y Marítima. No.2, 'Palma' is seen (above) still in use after more than a century. 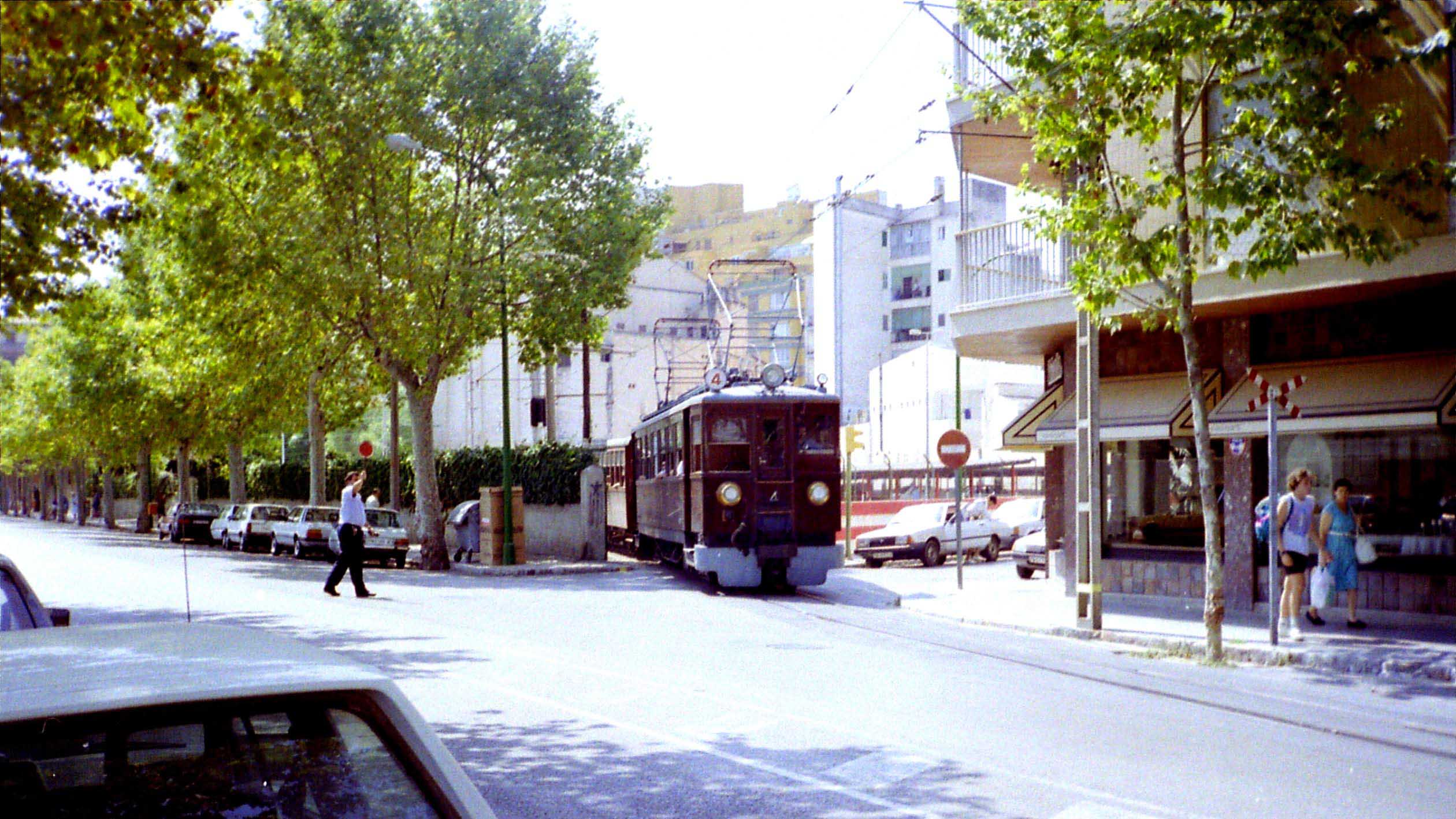 Leaving Palma sees the railway merge with road traffic on the Carrer d'Eusebi Estada. A crossing guard is seen waving a red paddle, presumably to warn cars of the approaching train. 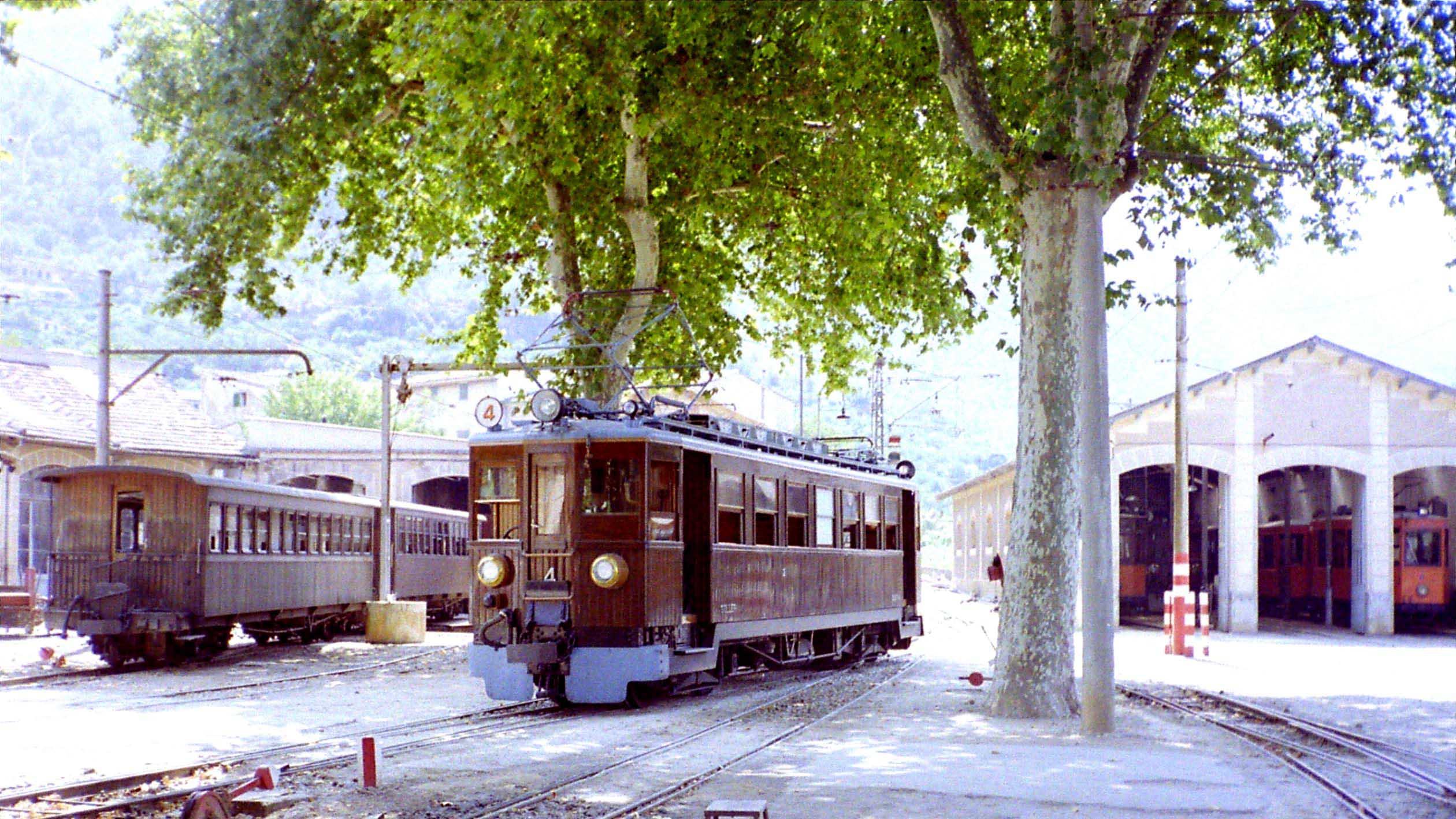 At the other end of the line, in Sóller, lies a more substantial depot where the trams of the Tranvía de Sóller carry on to the Port de Sóller by the coast. Combined tickets ensure passengers and tourists can easily make use of both. In one area the electric locomotives and carriages are stabled and no.4 'Son Sardina' is seen here (above) which arrived in 1913. A tram, no.2 (below), is seen stabled on the other side with two open cars behind it. The tramway and trams also date from 1913. 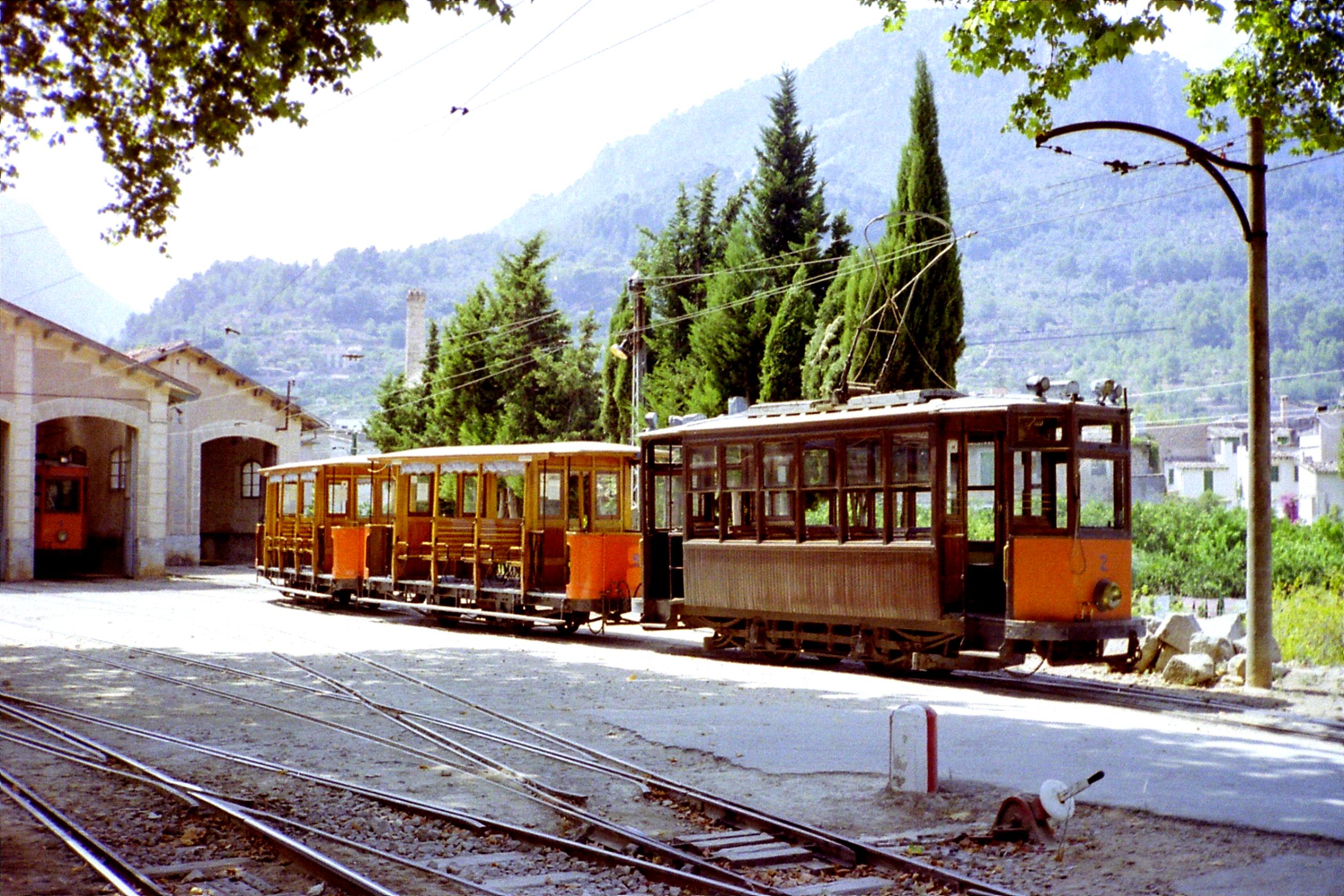 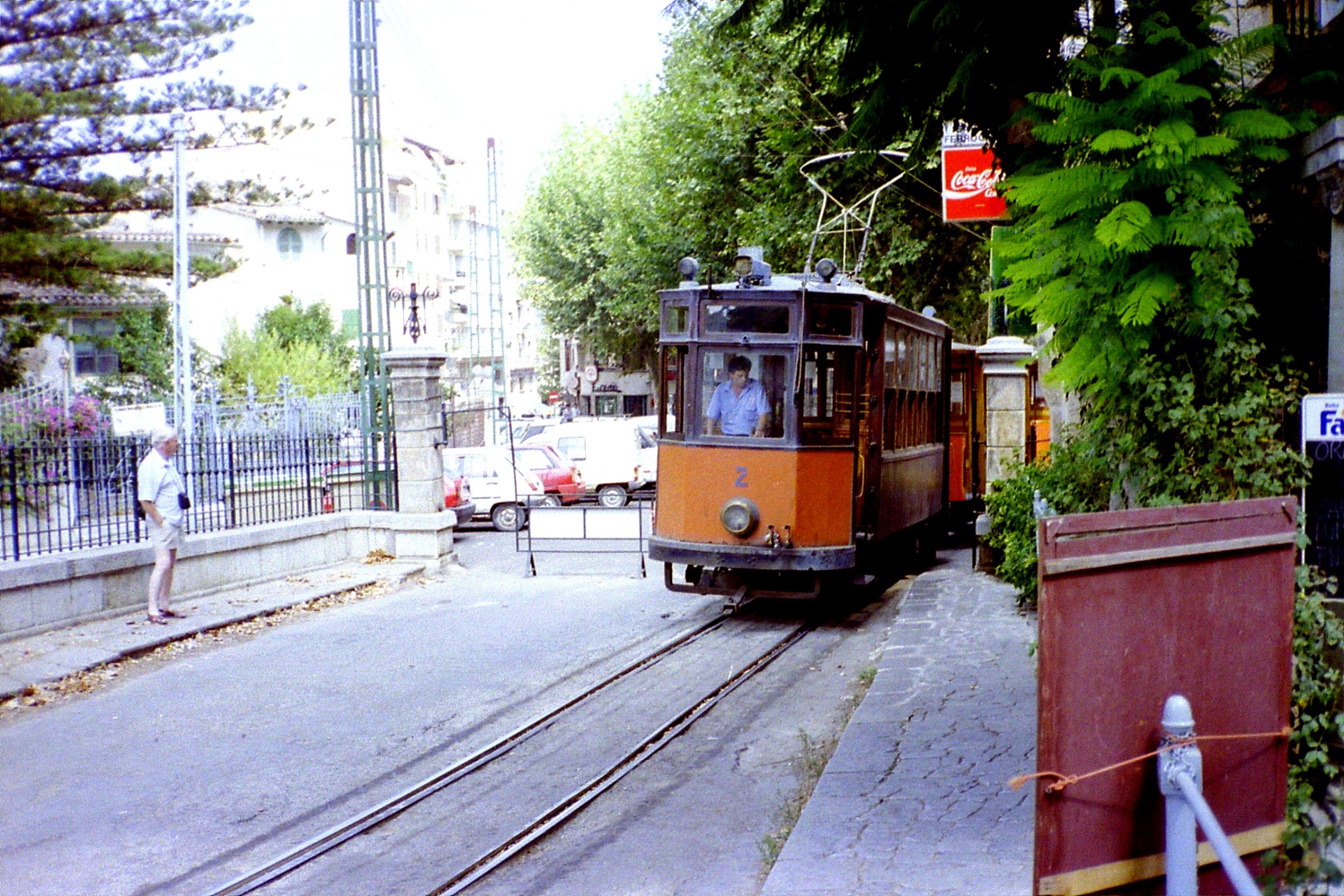 The trams too merge with road traffic for part of the route towards the Port, but this time negotiating tight alleyways and parked cars. Two stone gate posts denote the entrance / exit of the depot (above) whereas elsewhere plenty of 'No Entry' signs ensure cars aren't tempted to use the tramlines as short cuts. 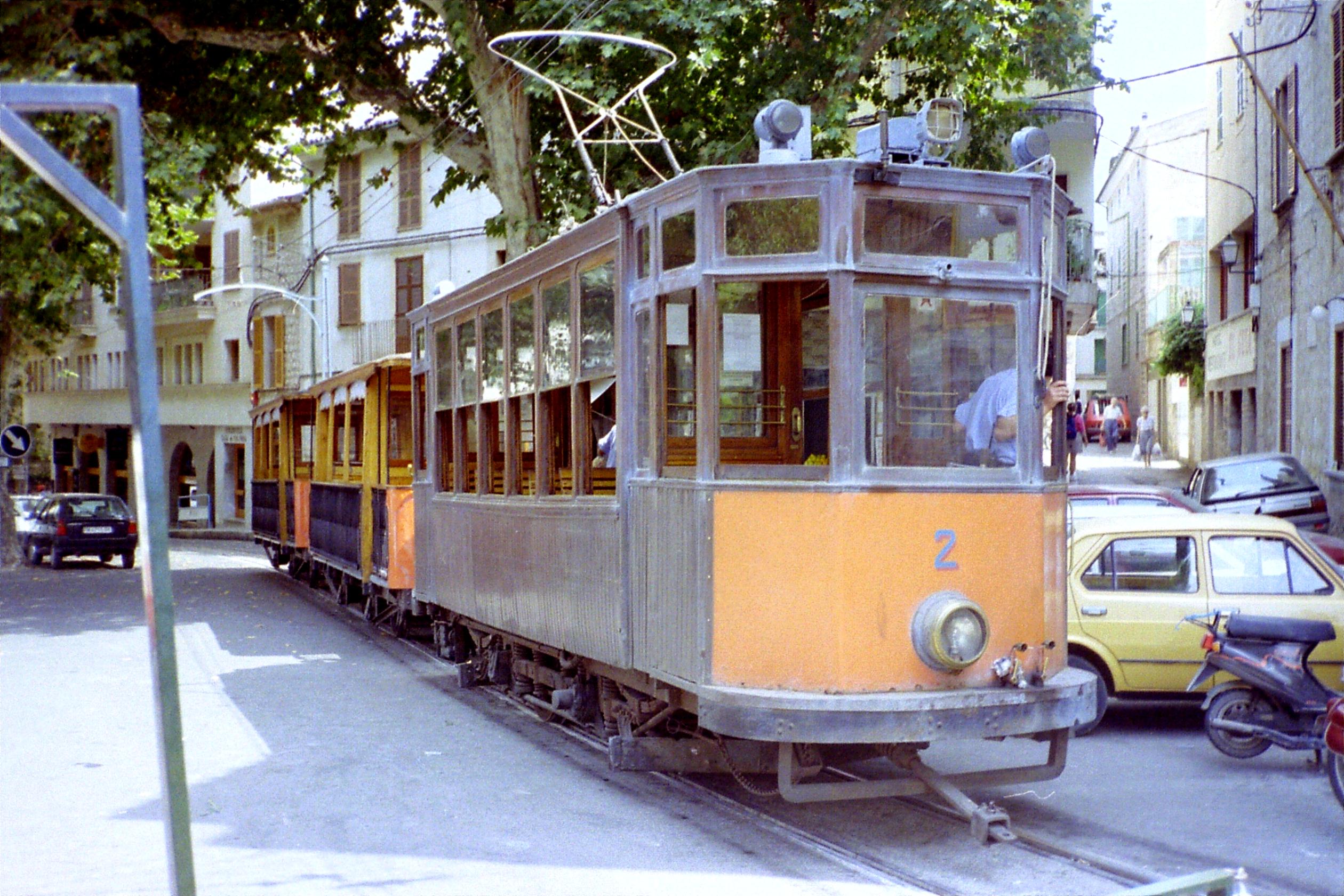 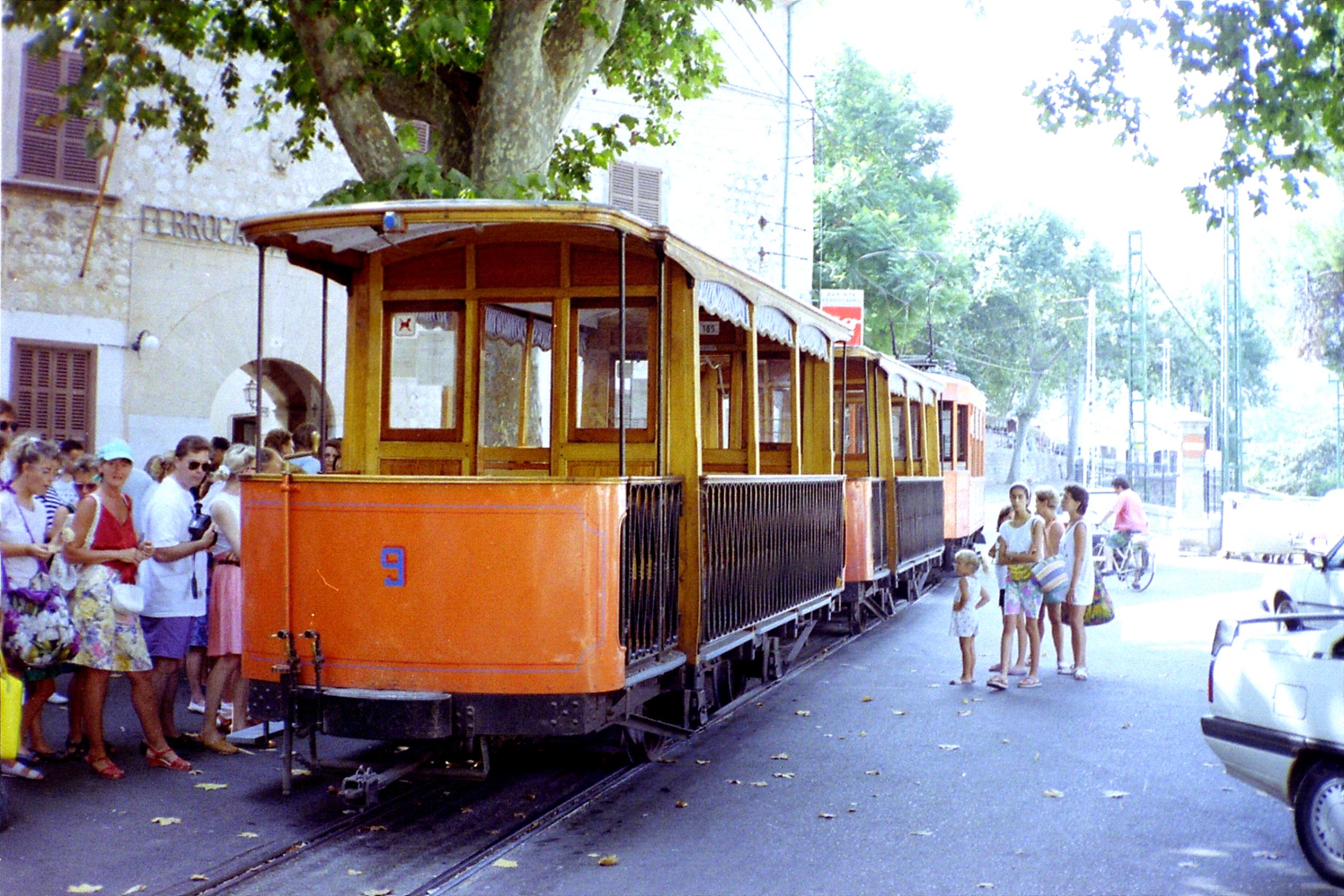 The open trailer cars (above) hauled by the tram at the front date from as early as 1890 and were originally in use around the city of Palma prior to the building of the railway. They were acquired for the trams in 1954. Other items of rolling stock have been acquired from Bilbao on the Spanish mainland and Lisbon, across the border in Portugal. No.4 (below) came from Bilbao in May 1958 but was built in 1932 using parts from a previous vehicle. It was retired in 2000. 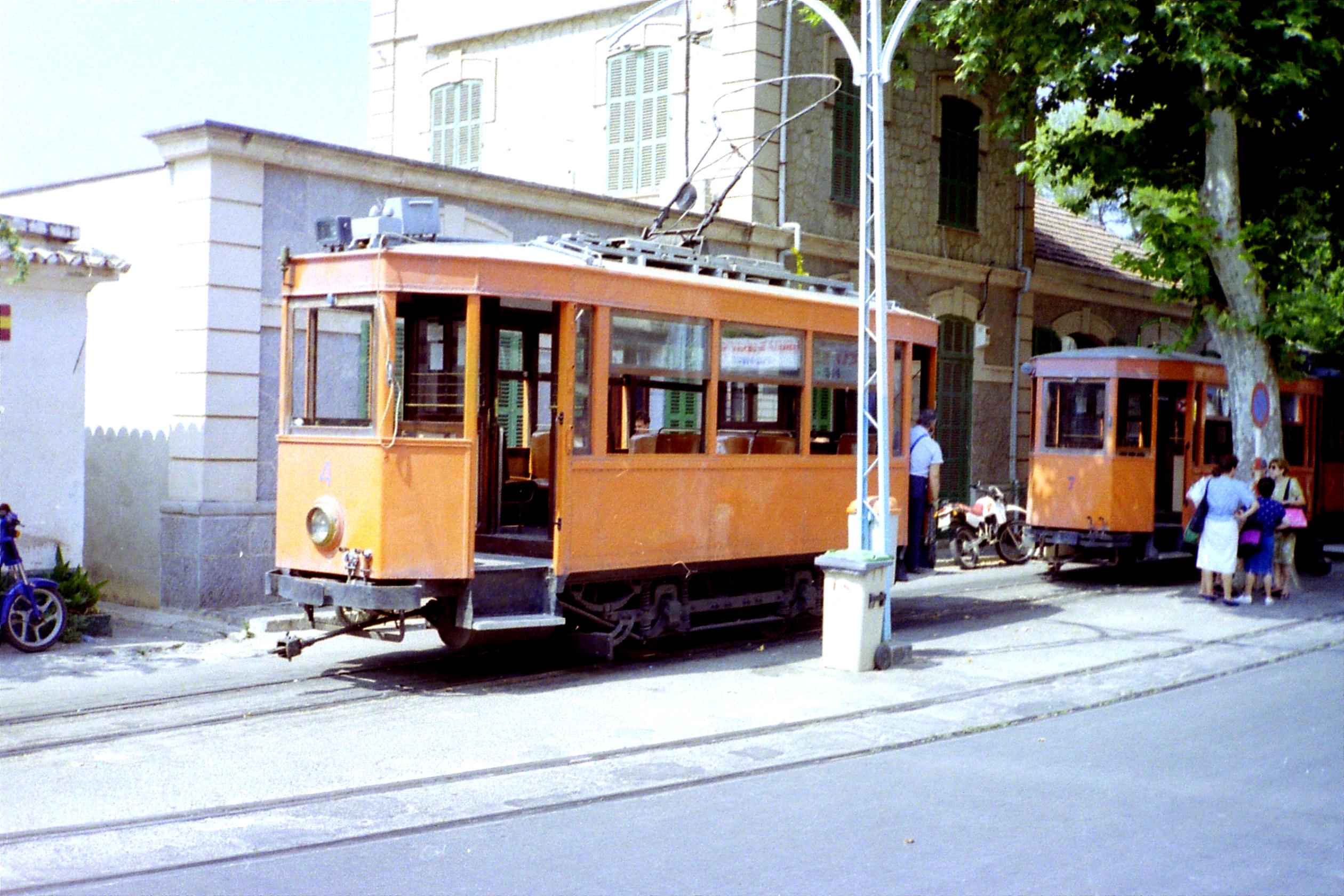 Learn more about the Ferrocarril de Sóller over on their website: https://trendesoller.com/eng/