The weekend of the 21st & 22nd May 1892 was a monumental date in the history of railways in Britain. Up until that point, Isambard Kingdom Brunel's Great Western Railway had been built to his specified gauge of 7 ft 1⁄4 in (2,140 mm), but as time progressed and other parts of the UK preferred the use of what would become Standard Gauge at 4 ft 8+1⁄2 in (1,435 mm), it was decided through the Gauge Commission that the rest of the country should follow. On that fateful weekend, broad gauge was abolished and an immense effort took place to ensure that this impactful conversion to a uniform system was done so as quickly and smoothly as possible. 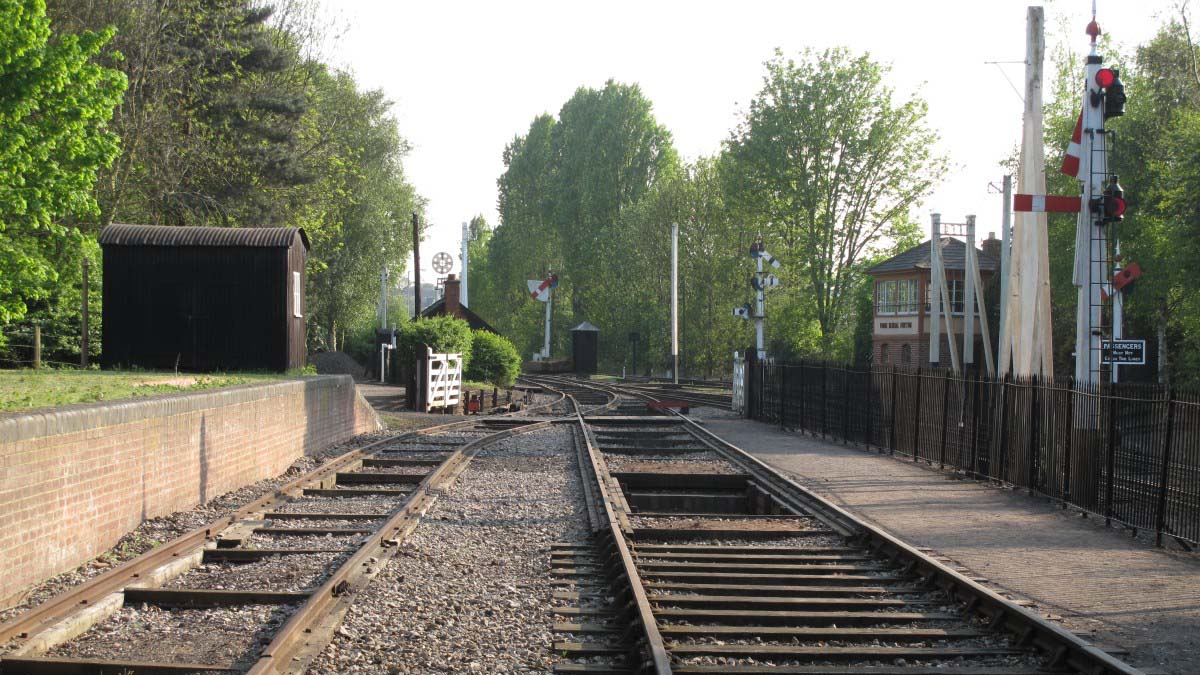 But since then, the concept of Brunel's broad gauge has garnered a number of admirers who have done well to chart its history and in some cases hold on to small sections of broad gauge track to educate railfans today. Most significant is the rebuilt section of broad gauge track at the Didcot Railway Centre which was lifted from the Burlescombe area in the late 1970s after discovery of rail dating from the 1870s in remarkably good condition. A complex operation took place of cutting, lifting and moving the rails from the site, near Westleigh Quarry, with the intention of relaying in conjunction with Didcot Transfer Shed some 130 miles away, which acted to move goods between broad and standard gauge trains. This work was carried out by the Great Western Society and members of their Taunton Branch were responsible for the initial discovery and moving of the rails to the present Didcot location. 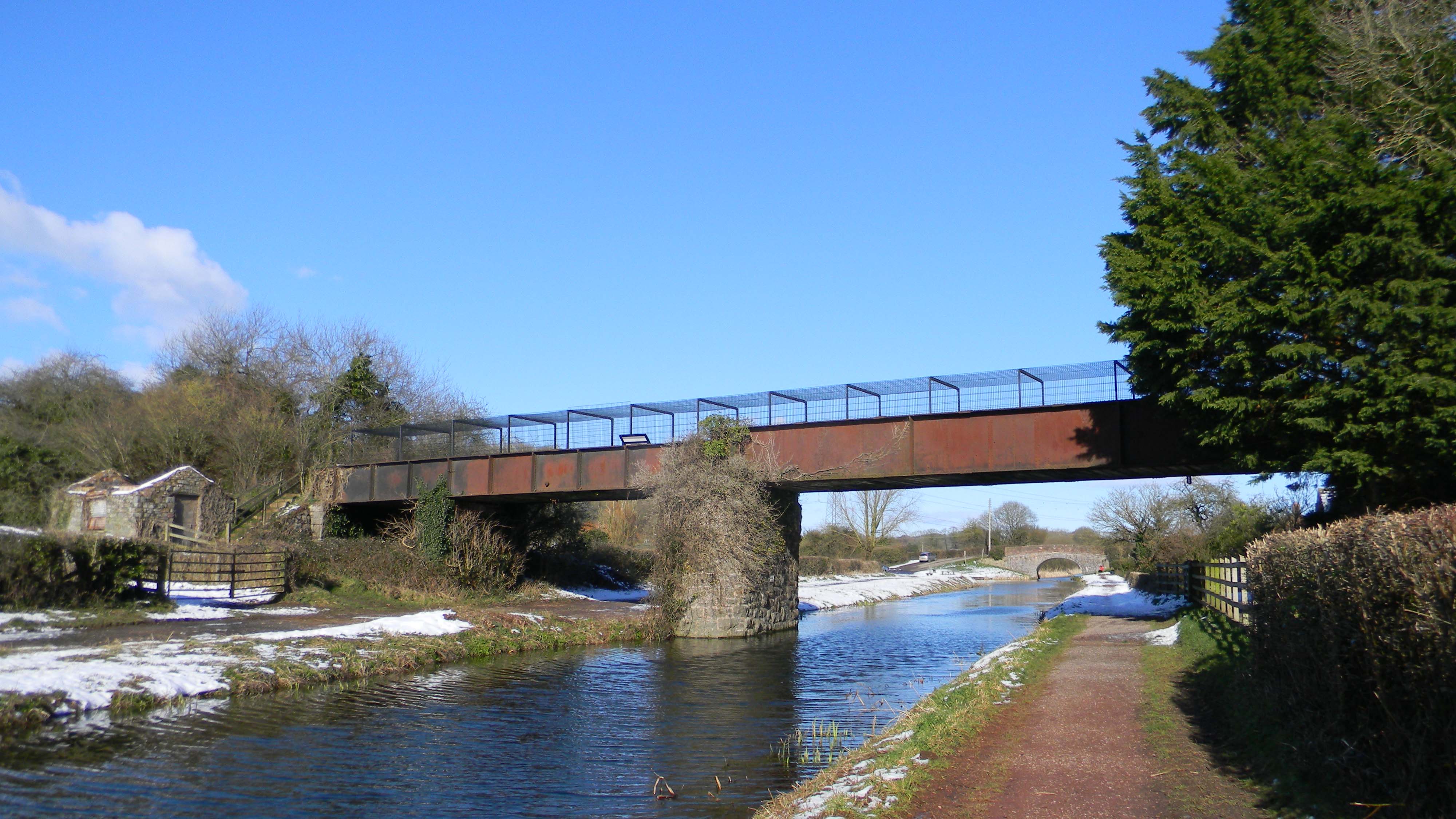 The girder bridge over the Tiverton Canal at Burlescombe that once would have carried the Westleigh Quarry branch line off of the Bristol & Exeter Railway. Photo by Joe Rogers.

But of course to aptly demonstrate how broad gauge once operated, a working locomotive was required. Obtaining and restoring such a locomotive dating from as early as the 1840s was never really a viable option and so the first of two replica broad gauge locomotives was built in 1985 - the 4-4-2 engine Iron Duke. Original engines of this type were built from 1847 and this contemporary replica was built to represent the first batch of these. Iron Duke ran during events marking 150 years of the Great Western Railway in 1985 including along a short stretch of track laid at Kensington Gardens in London. After a tour of the UK and stay at the National Railway Museum (whose collection it forms part of) Iron Duke ended up at Didcot where it was cosmetically restored for static display. 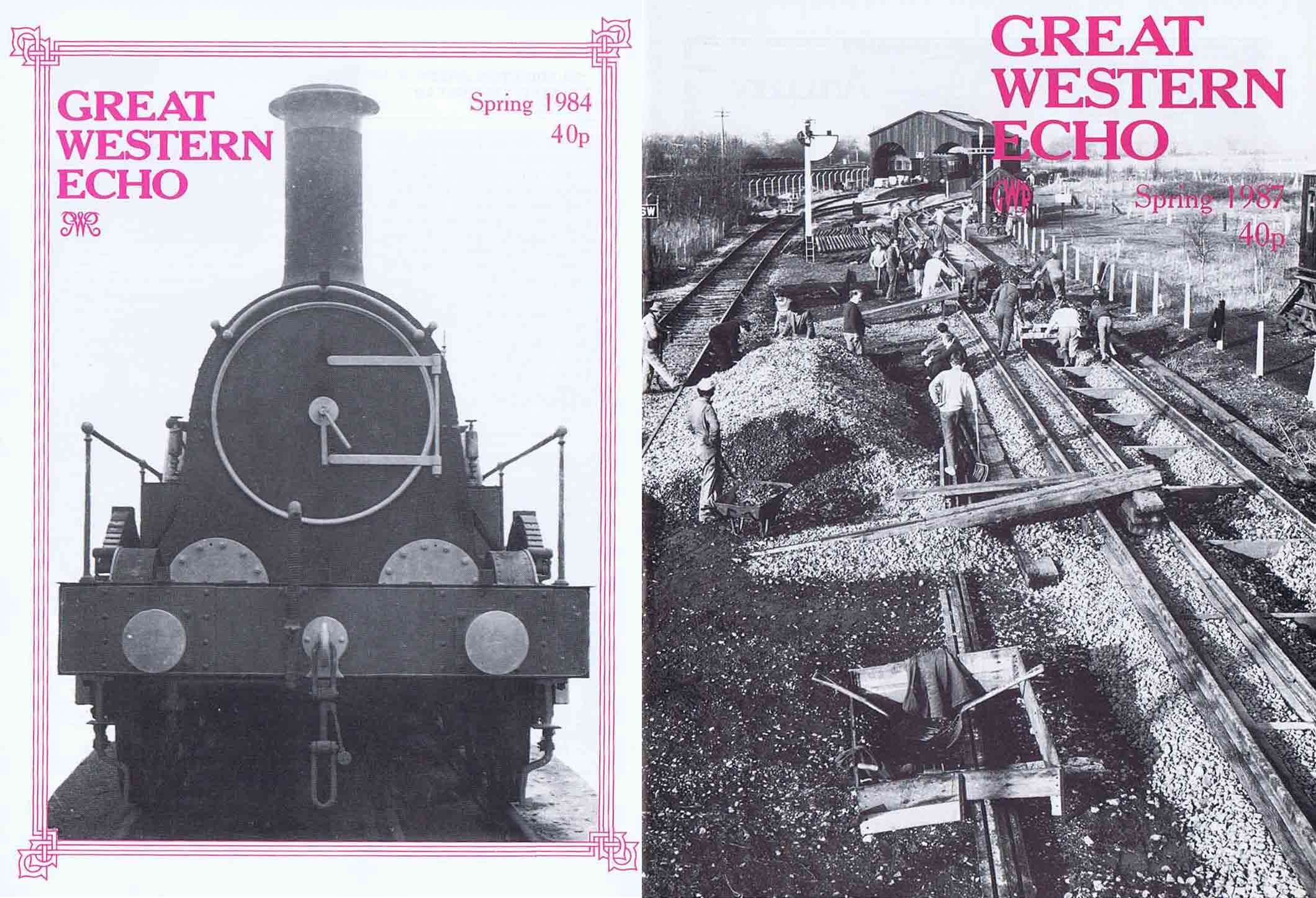 'Iron Duke' poses for the cover of the Spring 1984 issue of 'Great Western Echo' (left). The scale of the work carried out to recreate a broad gauge railway at Didcot can be seen on a later cover of the same publication from Spring 1987 (right).

The building of Iron Duke was a massively engaging tool in bringing the bygone broad gauge to life and in 2005 another locomotive, Fire Fly was built at Didcot by The Fire Fly Trust with the aim of running on the re-instated track described earlier. In order to accommodate this and standard gauge traffic, the series of costly, complicated points, trackwork and signalling had to be recreated but allowed visitors to ride behind a broad gauge steam train - a rare thing indeed. Eventually Fire Fly was handed to the Great Western Society and currently is awaiting an overhaul to allow it to return to service. 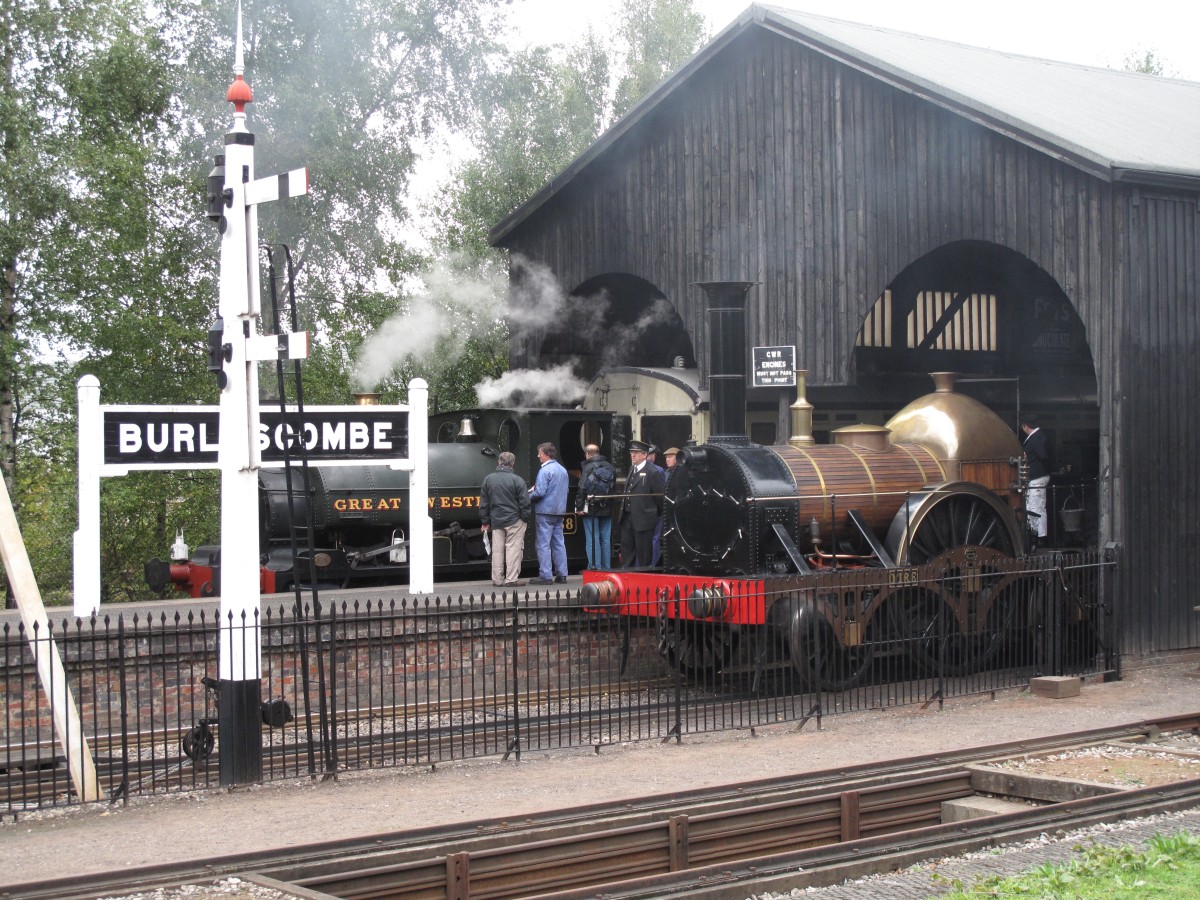 'Fire Fly' leaves the transfer shed at Didcot and through 'Burlescombe Station'. The original Burlescombe Station was of course many miles west in Devon but was closed in 1964. Nothing remains of the buildings or platforms.

But elsewhere relics of the GWR's broad gauge also remain as brief reminders of the changes that took place to create the uniform railway system Britain continues to use today. Bishops Lydeard's Gauge Museum on the West Somerset Railway, a few miles east of where the Didcot track was lifted from, itself hosts a number of interesting items from GWR's past, including items from the line between Taunton and Minehead prior to broad gauge's abolition. Further along the line at Crowcombe Healthfield, a short stretch of broad gauge track adorns the down platform with a plaque describing it to visitors of this picturesque and culturally important station. 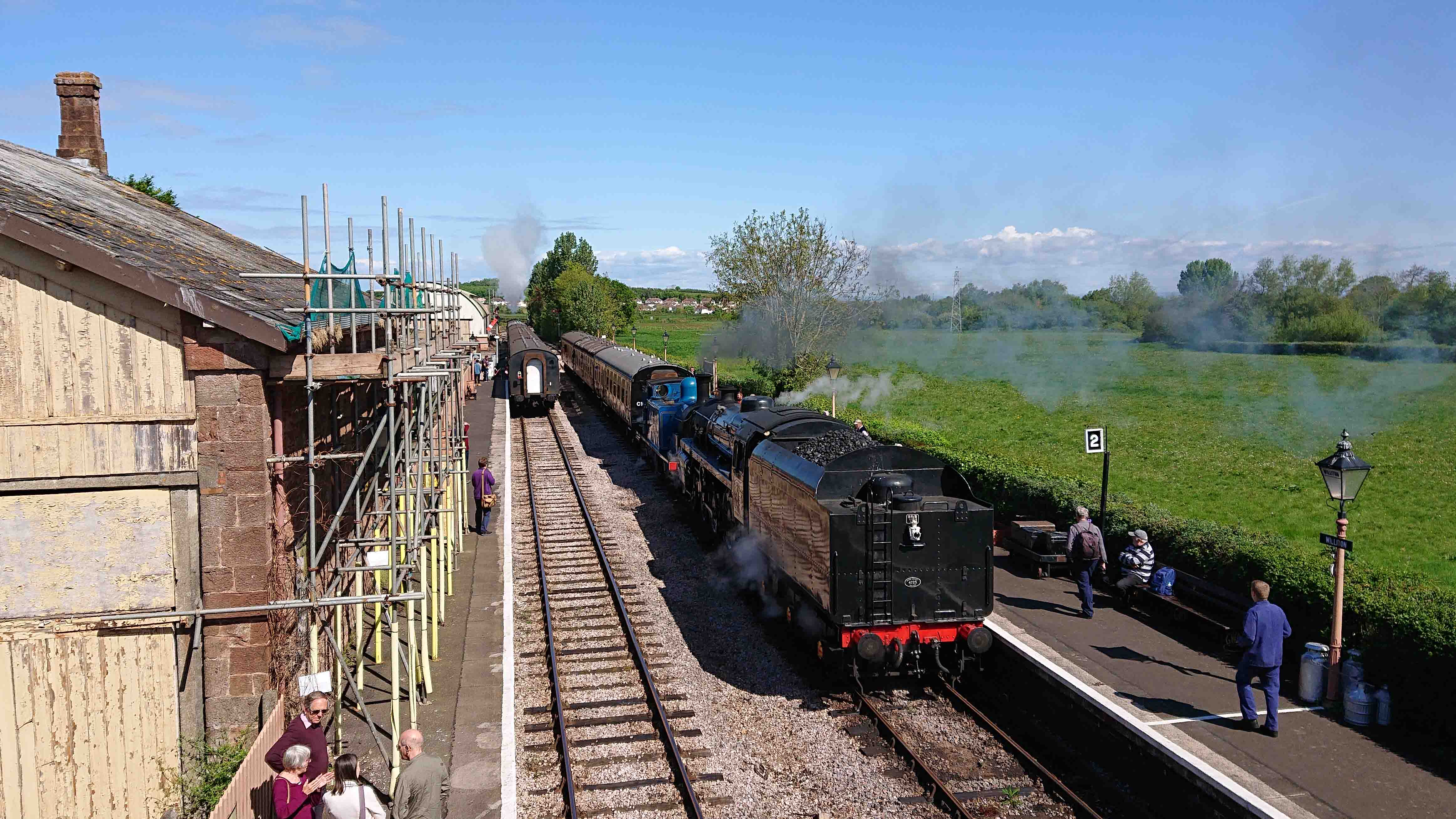 Williton Station on the West Somerset Railway is another location holding onto a legacy of Broad Gauge. The gap between the two platforms and lines is wider than usual as this station which formed part of the original broad gauge line from Taunton to Watchet. 4MT no.75069 and Caledonian no.419 double-head a service from Minehead for 2022's Spring Steam Gala and can be seen in the Up platform. Photo by Joe Rogers. 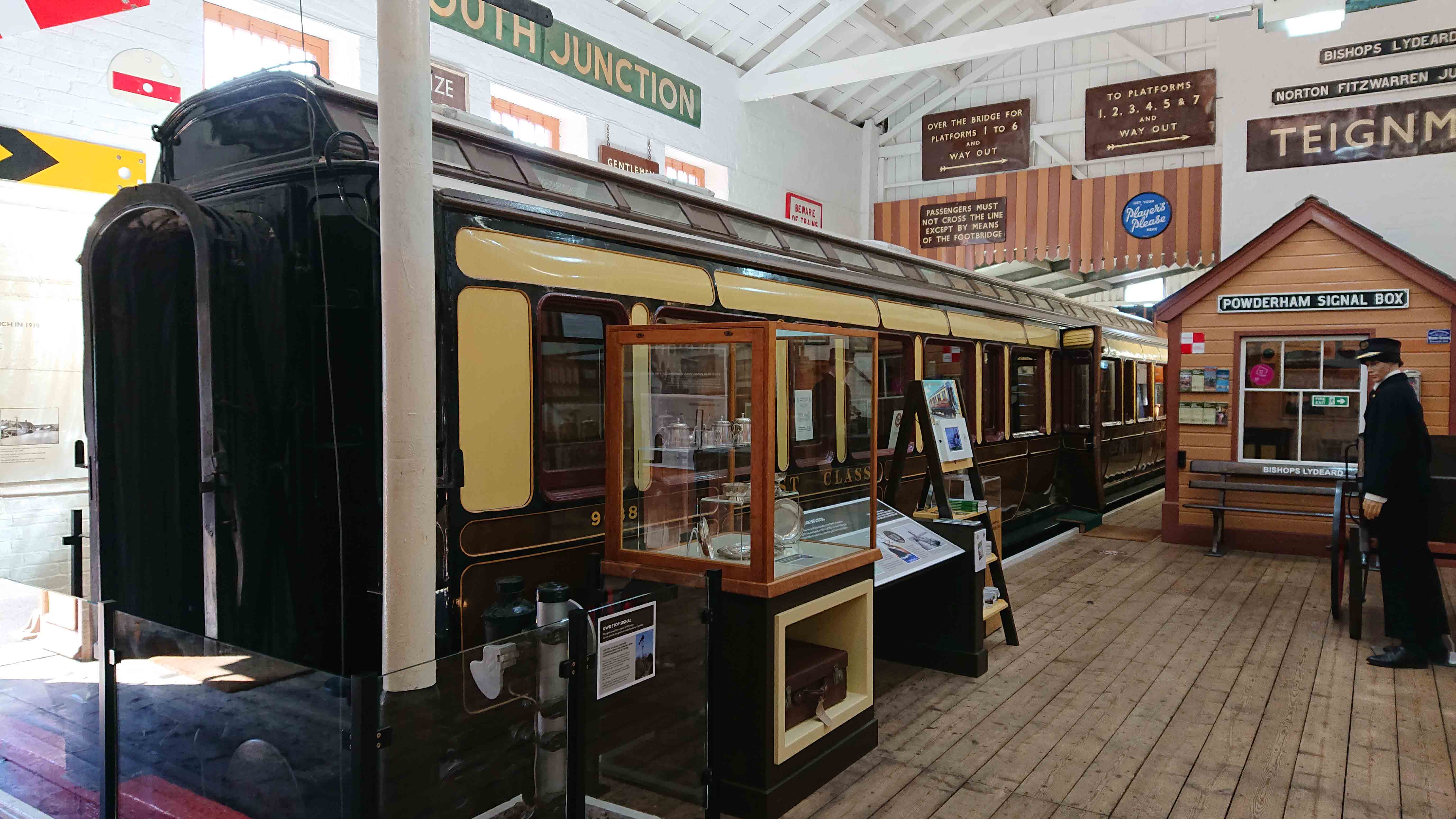 The Gauge Museum as Bishops Lydeard, run by the West Somerset Railway Heritage Trust, has recently made a learning resource free to obtain for schools on the subject of Broad Gauge until the end of this year, to mark 130 years since it was abolished. You can find out more here. Photo by Joe Rogers.

Further south at Buckfastleigh, the South Devon Railway hold onto Tiny which is the only remaining original locomotive in the world to exist from Brunel's broad gauge. Its unusual vertical boiler and use along a harbour line in Plymouth is atypical and very different to the larger passenger and freight locomotives depicted in the Iron Duke and Fire Fly replicas. Nevertheless even though only a static locomotive, Tiny is another small piece of the broad gauge's past that exists to educate today's railfans and rail passengers. 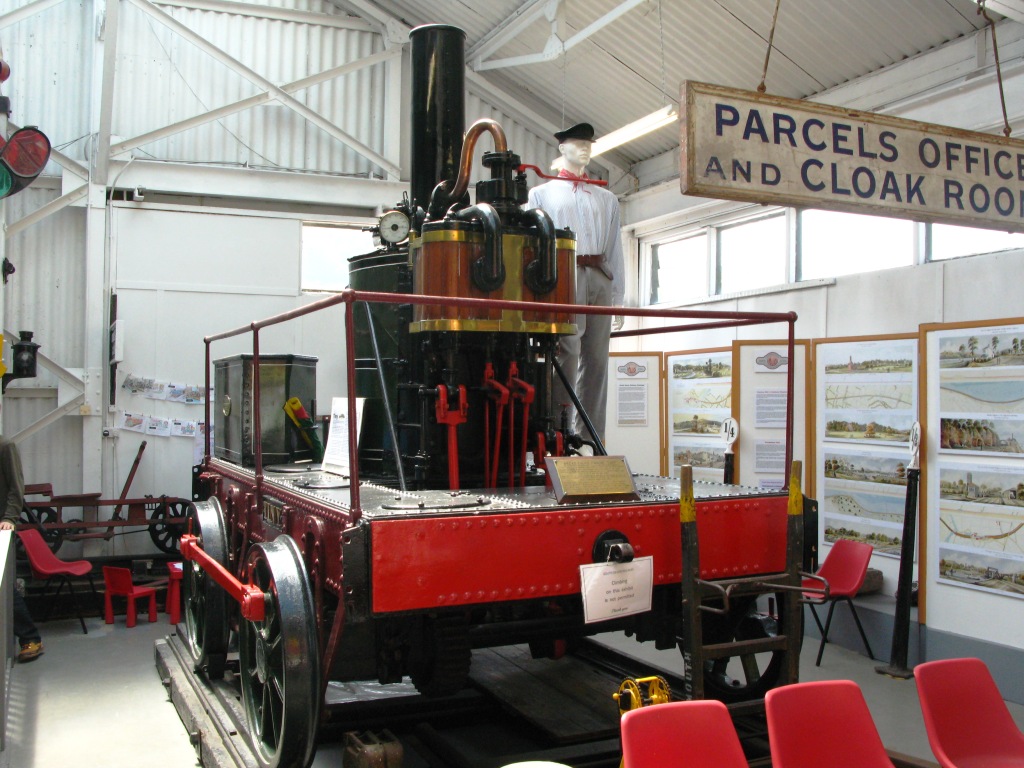 The work done to highlight and remember broad gauge by the Great Western Society, the Didcot Railway Centre and the West Somerset Railway has ensured that this system, which defined the origins of the Great Western Railway, is not forgotten and though the 21st May will be always be remembered as the day it was abolished, it should be used also to recognise its importance in modernising British railways in way we can all appreciate on today's tracks.

For more on the locations mentioned in this article see the below links: