Britain has an eclectic variety of railway stations spread across its landscape, from large bustling termini, to country halts and coastal platforms. But perhaps one of the most intriguing elements of today's network are request stops. These stops, often rural and out of the way, receive fewer passengers than most, sometimes more sporadically and therefore do not warrant the stopping of a regular service. As a result, to make certain services more efficient, passengers are required to 'request' that the train stops there either by alerting the Guard on board (if wishing to alight) or by getting the attention of the driver through a clear, solid single-armed signal from the platform. 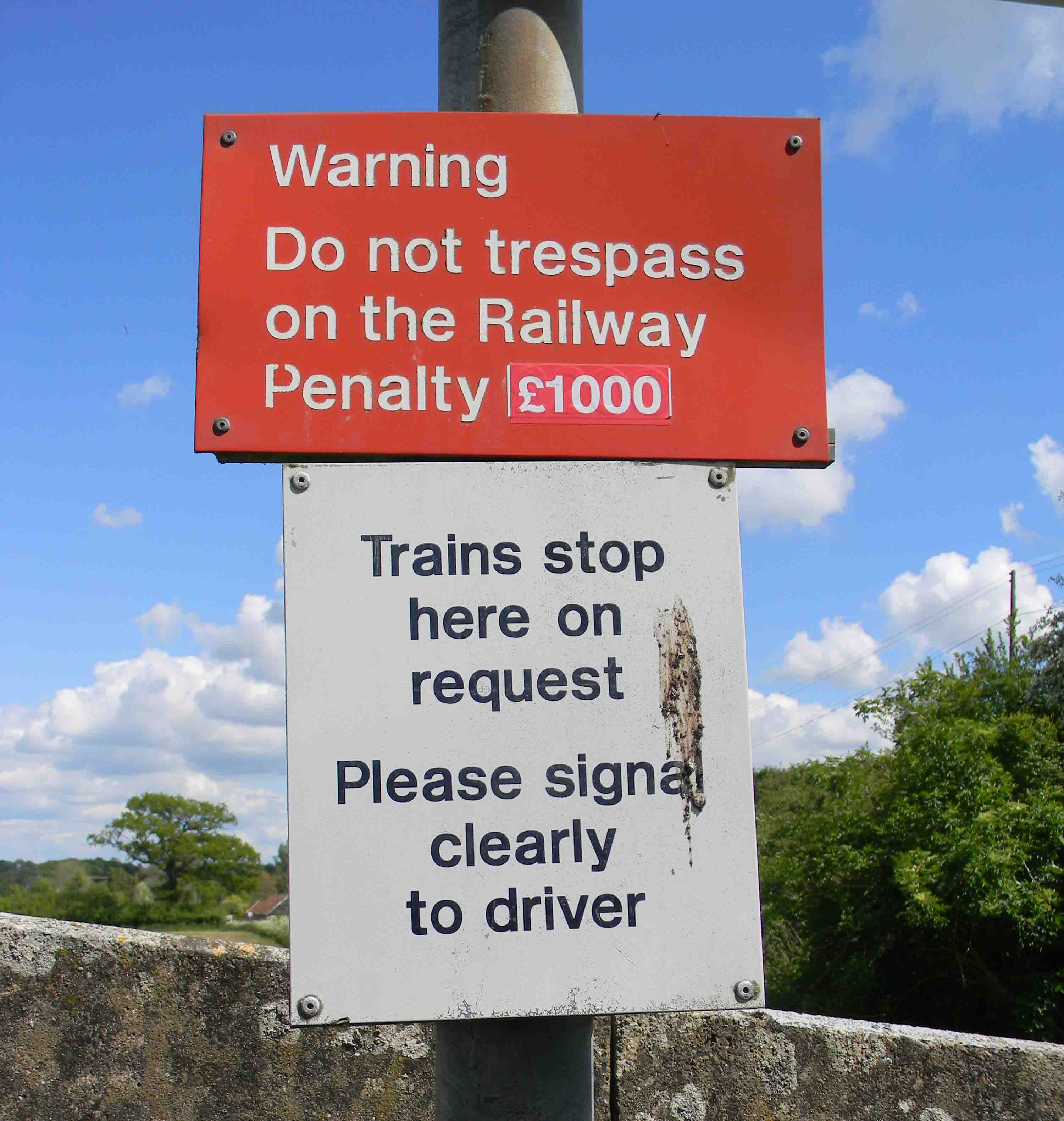 "Trains stop here on request. Please signal clearly to the driver." For first-time passengers at a request stop, the process can seem daunting but the reality is rather simple. Hailing a cab or a bus warrants a similar sort of action.

One such station is Chetnole in deepest Dorset. This neck of the woods was the realm of author Thomas Hardy, whose Wessex Tales were based on an altered version of the historic county. The Heart of Wessex railway line runs through from north to south starting many miles away at Bristol Temple Meads, before cutting through Somerset (and briefly Wiltshire) before passing through Dorset on its way to the coastal port of Weymouth on the south coast. Work started on the line during the 1850s, through to the 1870s and included a change in gauge from the originally intended Broad Gauge to the current Standard Gauge. Chetnole Halt, as it was called on opening, was built much later in 1933 and consisted of a wooden platform between Yetminster and Maiden Newton. 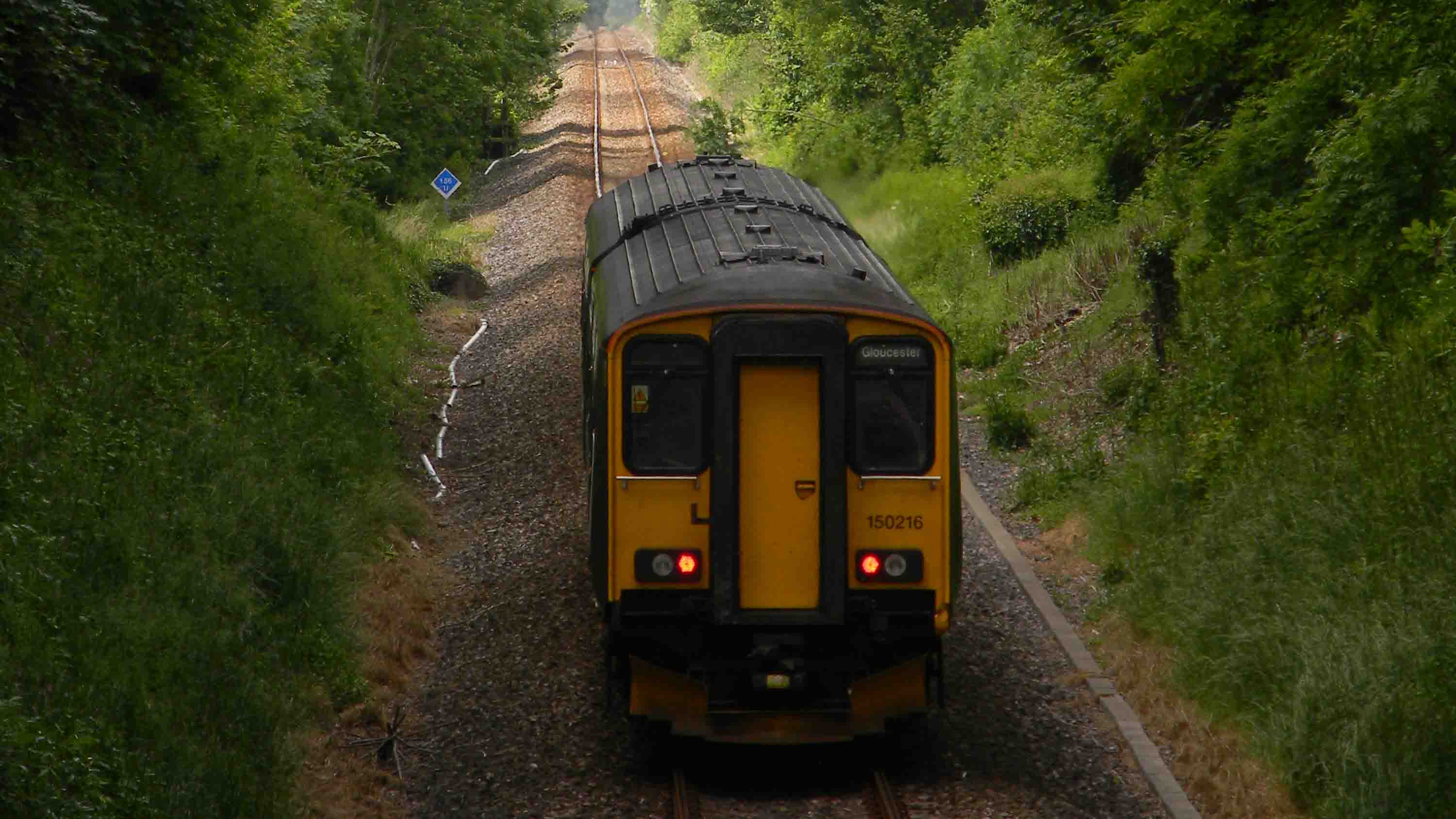 Class 150 no.150216 trundles north towards Maiden Newton and Chetnole having just exited the Frampton Tunnel. Heritage rail tours sometimes use this scenic line for services from London via Yeovil and Weymouth but otherwise it is just these DMUs that pass through the isolated Dorset villages. 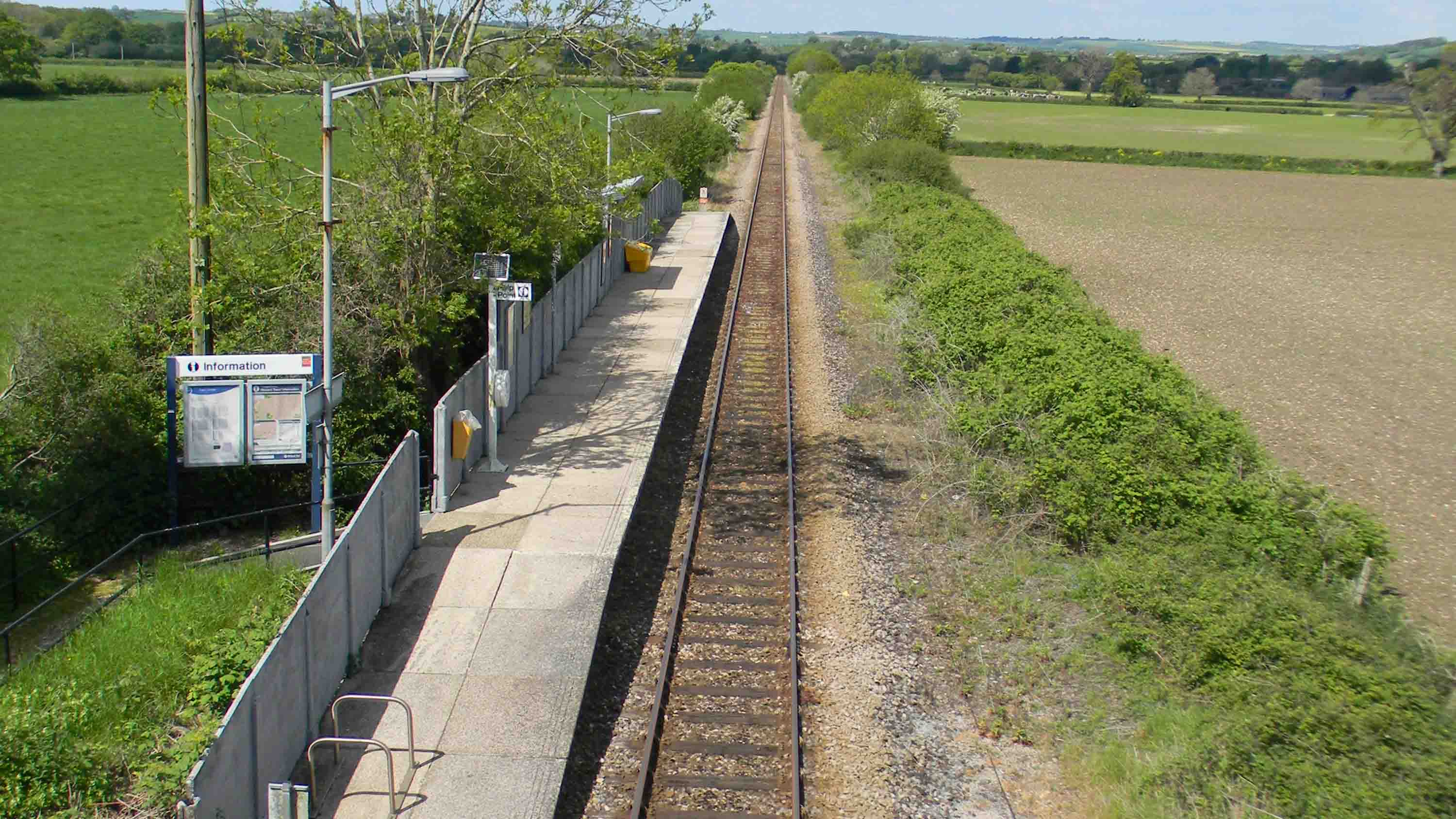 A lonely platform in the middle of nowhere. Chetnole Station is a prime example of why some stations do not feature regular stopping services.

The village of Chetnole itself highlights why such a station might not warrant the full attention of every passing train service. With a population of around 350 in around 130 houses, it is hardly the busy focal point that most railway stations require to keep them in regular use. The story back in 1933 may have been slightly different, but today's car ownership even in rural English villages makes the case for a railway station even less convincing. Even for visitors and tourists, the area offers little beyond some inspiring scenery and countryside walks. The only notable attractions being the village church, with origins in the 13th century, a pub and the grounds of Melbury Park to the west. Beyond that, farms and hamlets occupy the landscape. As a result, annual passengers numbers rarely break 3000 which works out to an approximate average of only 8 passengers per day or 0.5 passengers per service (on days with 16 services).

Chetnole House is a mid-18th century property in the Queen Anne style. A very attractive country home, as many are in this part of England.

In many ways the argument for such a station today is not 'why?' but rather 'why not?' With the Guard able to use descretion and stop only when required, GWR, who run the current services between Weymouth and Gloucester, have the best of both worlds in a station with little running costs (no staff / facilities) that on occasion brings in a modest fare or two from those taking a trip north to Yeovil and beyond or south to Dorchester and Weymouth. The expense being a minute or two lost from the schedule which may well be made up by other request stops being missed on the line at Thornford and Yetminster.

The procedure for stopping a train is rather like that of hailing a taxi or bus service on the road. The driver of the train may well use the horn / whistle to alert any waiting passengers who can then give a clear, raised single arm signal to the driver in return. In most cases, the driver will then use the horn again to acknowledge that they are to stop. Alighting is somewhat easier, with passengers simply alerting the guard so that they in turn can relay to the driver that the train is to stop at the request stop. 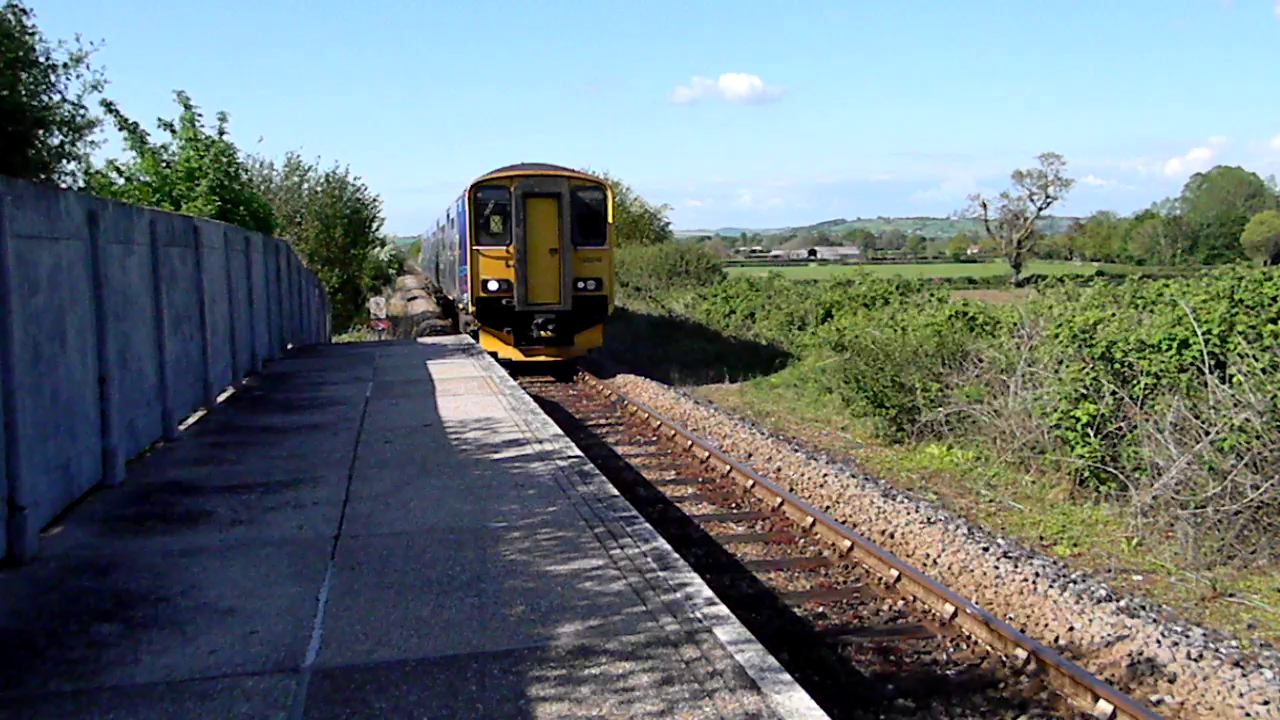 By the time the train is this close to the platform, the procedures have already taken place. Horn-hand-horn. Unsurprisingly, the train is a 2-car Class 150 but this time no.150246. 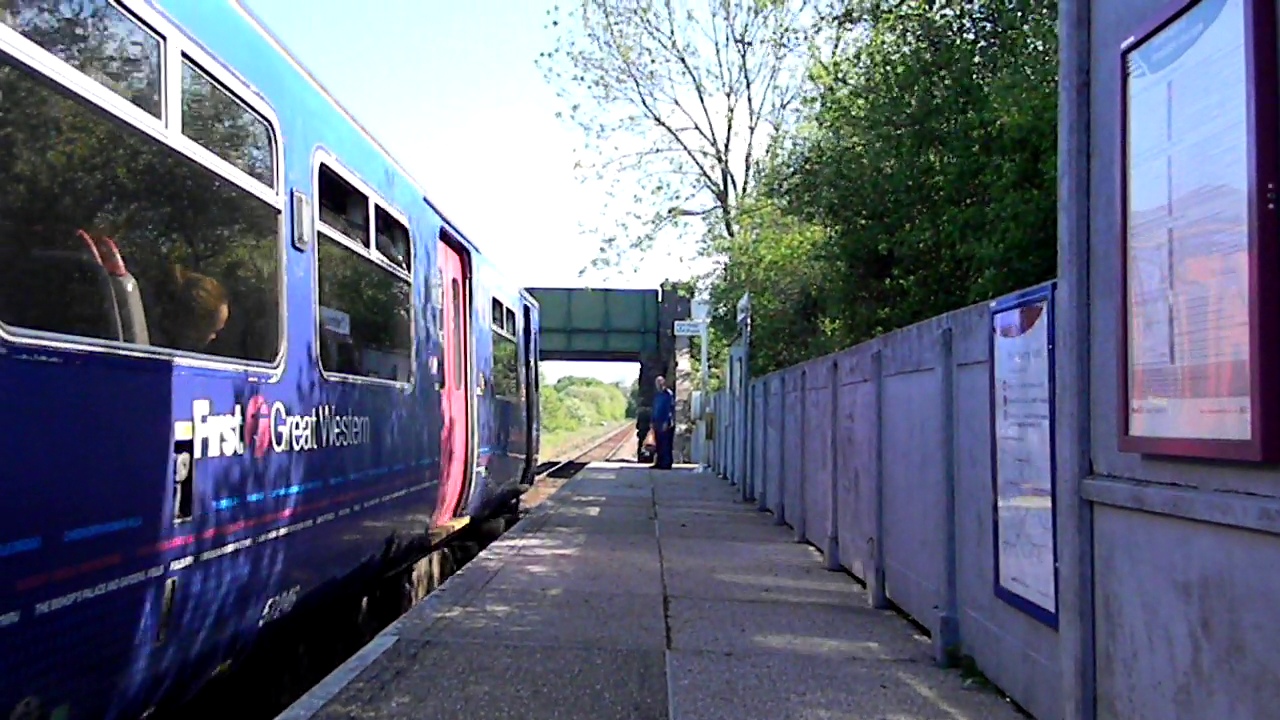 Success! After a stable, clear one-armed signal from the platform, we're able to board and continue on south to Maiden Newton and Dorchester.

Perhaps slightly more complicated, but uncommon due to the frequency of services, is what to do when you do not wish to board as a service approaches. Shaking a head or otherwise making movement can cause some confusion, as any signal might be misinterpreted as a 'request'. Generally, it is considered wise to exit the station altogether, to avoid any doubt. Remaining seated might also have the same effect.

Stations like this get very little 'air time' in the railway world, being rather unremarkable in terms of history, appearance and use but they are nevertheless important in one way or another to both the small, local populace and the Train Operating Company responsible for them. But being request stops themselves gives them distinction over other typical stations and for that reason can sometimes be an attractive prospect for railfans.

All photographs by Joe Rogers.