An Acquaintance with the Clinchfield

For author Gary Dolzall, a long-awaited chance to visit the legendary Clinchfield came during an Appalachian autumn.

It was a railroad name the mere mention of to me evoked magic: The Clinchfield. Thanks largely to family travels when I was a young boy and teenager, I had enjoyed the remarkable experiences of train-watching in locations from Maine to Florida to California. I had set foot at the likes of New York’s Grand Central Terminal, the Pennsylvania’s historic Horseshoe Curve, Burlington Route’s bustling Chicago “Raceway,” Rio Grande’s steam-powered Colorado narrow-gauge, and California’s daunting Cajon Pass. But somehow, I’d never made my personal acquaintance with the Clinchfield Railroad.

In November 1975, that changed. At the time I was a college student at Indiana University and, through the college railroad club, made friends with several fellow students with shared interests in both railroading and photography. And thus, on a late autumn long weekend, three of us climbed into a Volkswagen Beetle (yes, three gents and lots of camera equipment tucked in a VW bug) for the 340-mile journey from southern Indiana to Elkhorn City, Kentucky, northern terminus of the Clinchfield Railroad. A six-hour drive, begun after our last classes of the day, brought us to the eastern tip of Kentucky and the rugged Appalachians late in the night, but with dawn the next morning we headed straight to the CRR’s Elkhorn City yard office to have our first meeting with the fabulous Clinchfield.

What was it that made the Clinchfield such a siren for the train-watcher? The Clinchfield spun its steel rails across, over, and through America’s great Appalachian and Blue Ridge Mountains, hauled upwards of 20 million tons of coal a year, annually forwarded 6 million tons of manifest freight ranging from Florida citrus to steel and automobiles, generated outstanding profits, and operated with such verve and through such memorable and majestic scenery to be called the “Rio Grande of the East.”

It had been no simple task to build a railroad through the remote Appalachian and Blue Ridge chains. The oldest section of what became the Clinchfield was a 19-mile line laid down north from Johnson City, Tennessee, in the late 1880s by the diminutive but grandly named Charleston, Cincinnati & Chicago. The “Three-C” went no farther and a successor, the Ohio River and Charleston, added but another 14 miles of track. Then came George L. Carter, a man with a steel will that proved more than a match for the unforgiving mountains. With his South & Western (later to become the Carolina, Clinchfield & Ohio), Carter carved a superb railroad through the mountains at an average cost of $201,000 a mile. By 1909, the CC&O had reached Dante, Virginia, a tiny village tucked in the coal-rich country near Sandy Ridge. Carter soon extended his railroad with what was called the “Elkhorn Extension” 35 miles from Dante through the Breaks of the Big Sandy to Elkhorn City, Kentucky, thus tapping the coal-laden hills of northwestern Virginia and providing a connection with the Chesapeake & Ohio. Dressed for the occasion in a long-tail coat and derby hat, George L. Carter drove home the main line’s final spike 3 miles north of Dante in 1915. In the following decades, the railroad would add branch lines – the Fremont Branch, Nora Spur, Greenbriar (Haysi) Branch, and McClure Spur – to tap ever more coal mines, tipples, and loaders. Eventually, between Elkhorn City and Dante, the railroad would serve more than 30 coal-loading facilities. And in a final count, the railroad had hewn from the Appalachians more than 50 tunnels totaling more than 10 miles in length. Indeed, the relatively late construction of the CC&O paid off in full by the railroad being a superbly engineered rail line well suited to both hauling heavy tonnage and moving bridge traffic. For the duration of its life, George Carter’s railroad would, legally, be the CC&O, with the Clinchfield Railroad serving as its operating entity.

From its northern terminus at Elkhorn City, Kentucky, where it connected with the Big Sandy Subdivision of the Chesapeake & Ohio, the Clinchfield extended 276 route-miles south to Spartanburg, South Carolina, where it connected with the Charleston & West Carolina subsidiary of the Atlantic Coast Line (later Seaboard Coast Line), as well as the Southern Railway. The Clinchfield also had connections with the Norfolk & Western and Interstate Railroad (later a part of the Southern) at or near St. Paul, Virginia.

In 1924, the Atlantic Coast Line and Louisville & Nashville (the latter of which was itself largely controlled by ACL) gained control of the Clinchfield. In the steam era, the Clinchfield was, not surprisingly, famed for its big steam, which culminated with its roster of 4-6-6-4s, a group of which were largely copies of Union Pacific’s famed Challengers. The Clinchfield began to dieselize in the late 1940s, primarily with Electro-Motive stylish gray-and-yellow-clad F-units and versatile Geeps. In the second generation of the diesel era, the Clinchfield would call upon EMD and GE motive power, with a roster that included Electro-Motive SD40s, GP38s, SD45-2s, and (secondhand from parent SCL) SD45s, as well as burly General Electric U36Cs.

The Clinchfield that awaited us at Elkhorn City, and soon thereafter the coal-gathering hotspot of Dante, Virginia, 35 miles farther south, was one that indeed called upon big, modern second-generation diesels for much of its heavy work, but still rostered venerable EMD F-units. And CRR’s diesels could be readily spotted wearing the railroad’s original diesel-era gray-and-yellow livery as well as its later black and yellow scheme. It was common, too, for motive power from parent Seaboard Coast Line to make appearances on the CRR, and, at Elkhorn City, one could regularly find Chesapeake & Ohio power that had arrived via C&O’s Big Sandy Subdivision. Which is to say, in summary, a railroad every bit as captivating as its reputation promised. Over that long weekend, with autumn foliage still dressing the Appalachians, we experienced CRR’s workhorse SD40s lugging 100-car coal trains, GP38s working branch duty, and C&O six-axle power making the turn at Elkhorn City. We watched with awe as diesel emerged from Sandy Ridge Tunnel amid a torrent of swirling and angry blue exhaust and watched from a cliff at Breaks Interstate Park as a CRR southbound made its way through the wild and magnificent “Breaks of the Big Sandy” nearly 1,000 feet below us. We strolled the engine terminal at Dante on a rainy afternoon in company with veteran EMD F-units and GE U-boats, took night photos at Elkhorn City’s diminutive engine servicing facility, and chatted with crews in the nearby yard office (yes, the Clinchfield was, in the true sense, “railfan friendly”).

My acquaintance with the Clinchfield in 1975, happily, was not my last, and between 1975 and the railroad’s merger into Seaboard System in January 1983, more visits – and the chance to see the CRR’s equally remarkable “south end” – followed. For the opportunity of those visits – and especially so the chance to make my acquaintance with the Clinchfield in the Appalachian autumn of 1975 – I will be forever the richer. – Gary Dolzall 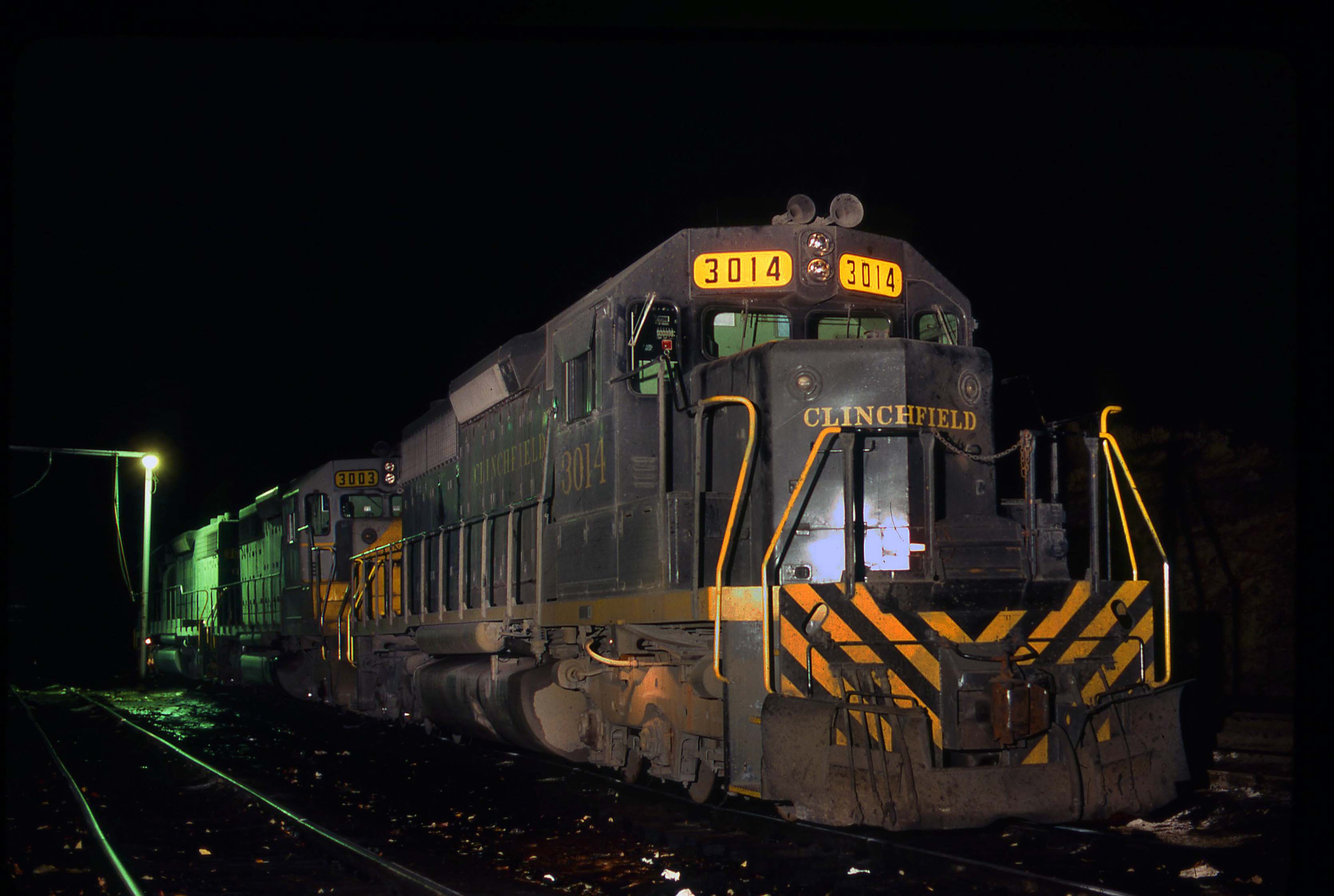 Workhorses in the night: At the diminutive engine servicing facility at Elkhorn City, Kentucky, a trio of Clinchfield Railroad’s second-generation workhorses – Electro-Motive’s 3,000-horsepower SD40 – pass the night in November 1975. Come the ‘morrow, there will be more coal to haul. 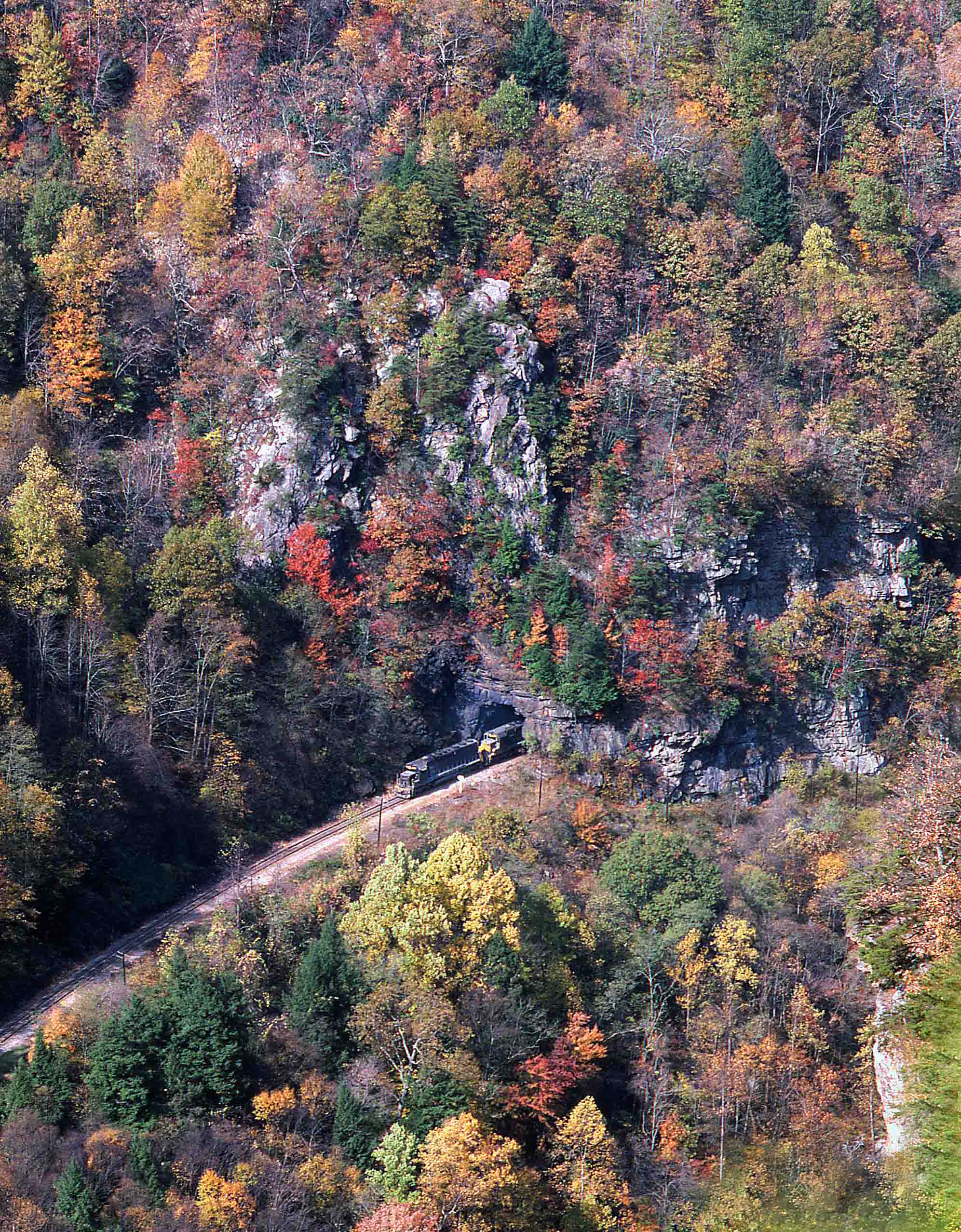 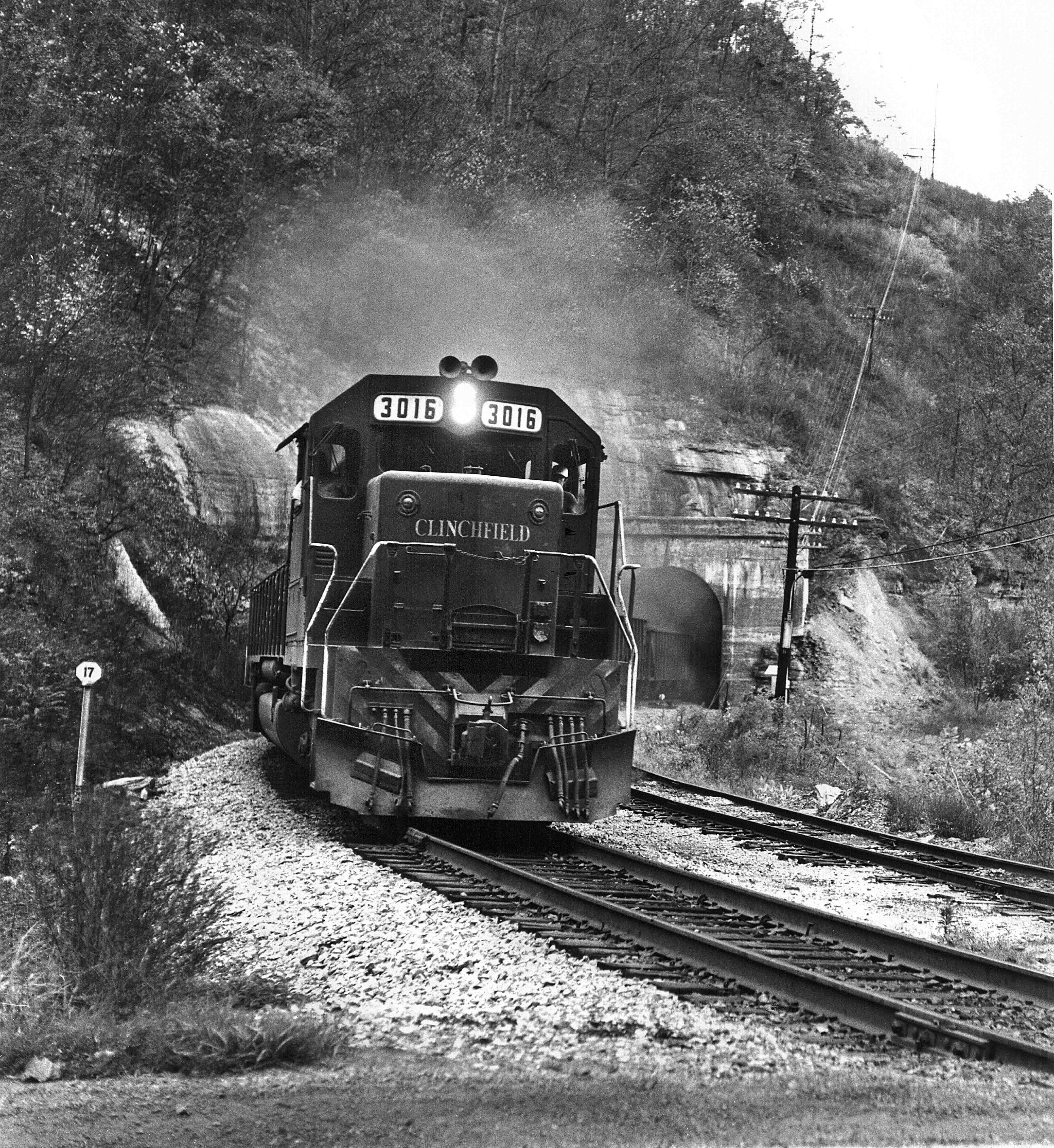 Moving the coal: Black-and-yellow Clinchfield SD40 3016 is on the point of a set of CRR EMD SD40s rolling coal tonnage south. At Milepost 17, the train emerges from Sykes Mill Tunnel No. 12 (above) and shortly thereafter crosses 2nd McClure Bridge (below). Clinchfield’s yellow number boards added a bit of panache to its locomotives. 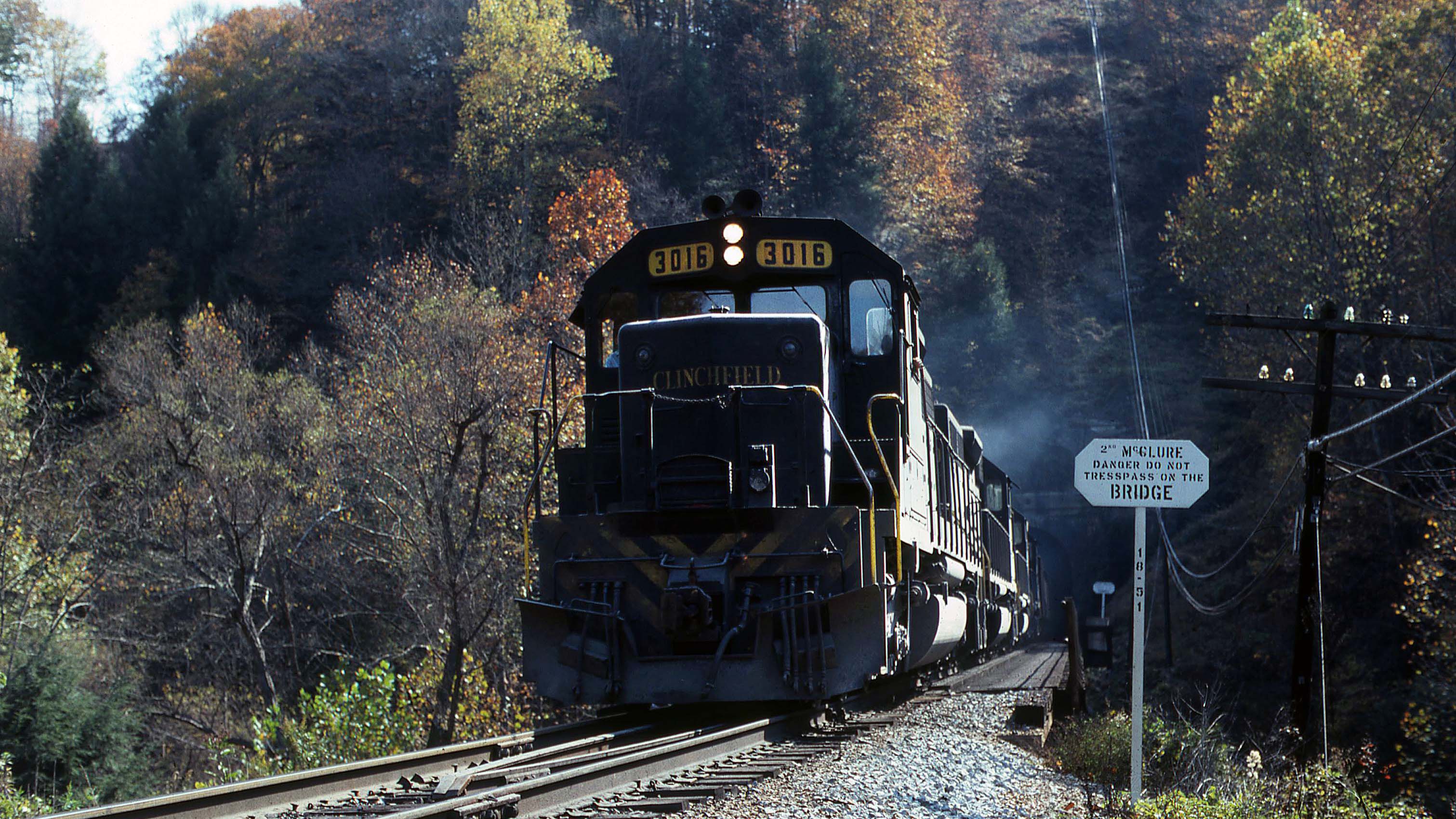 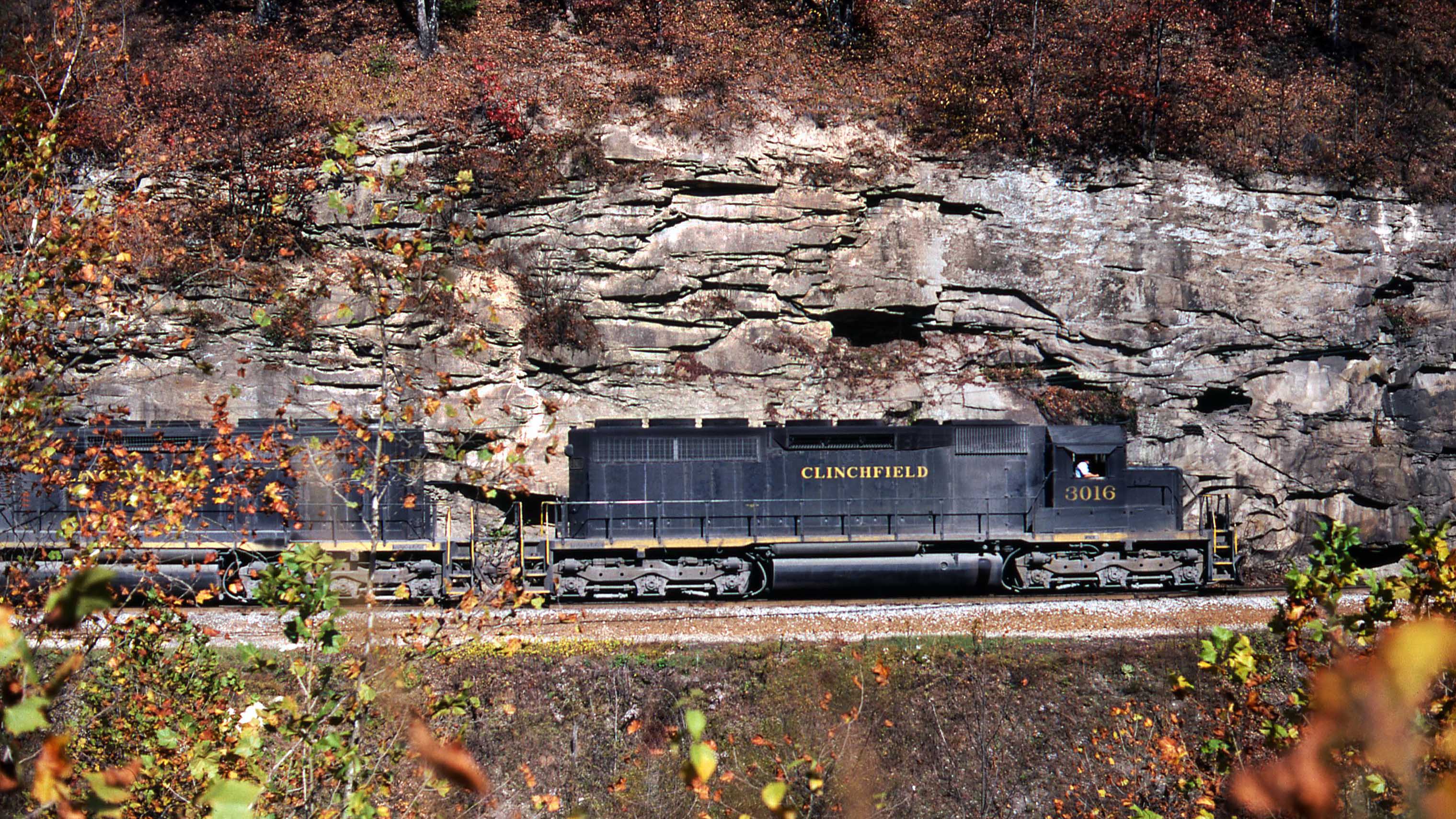 Framed by the lingering fall foliage of the Appalachians in November, Clinchfield SD40 3016 and kin roll beside rocky crags (above) that served as a constant reminder of the battle George L. Carter’s railroad faced in carving a path through the Appalachian and Blue Ridge Mountains. In a quintessential Clinchfield setting, a quartet of CRR SD40s roll past the wood clapboard depot at Fremont, Virginia (below). 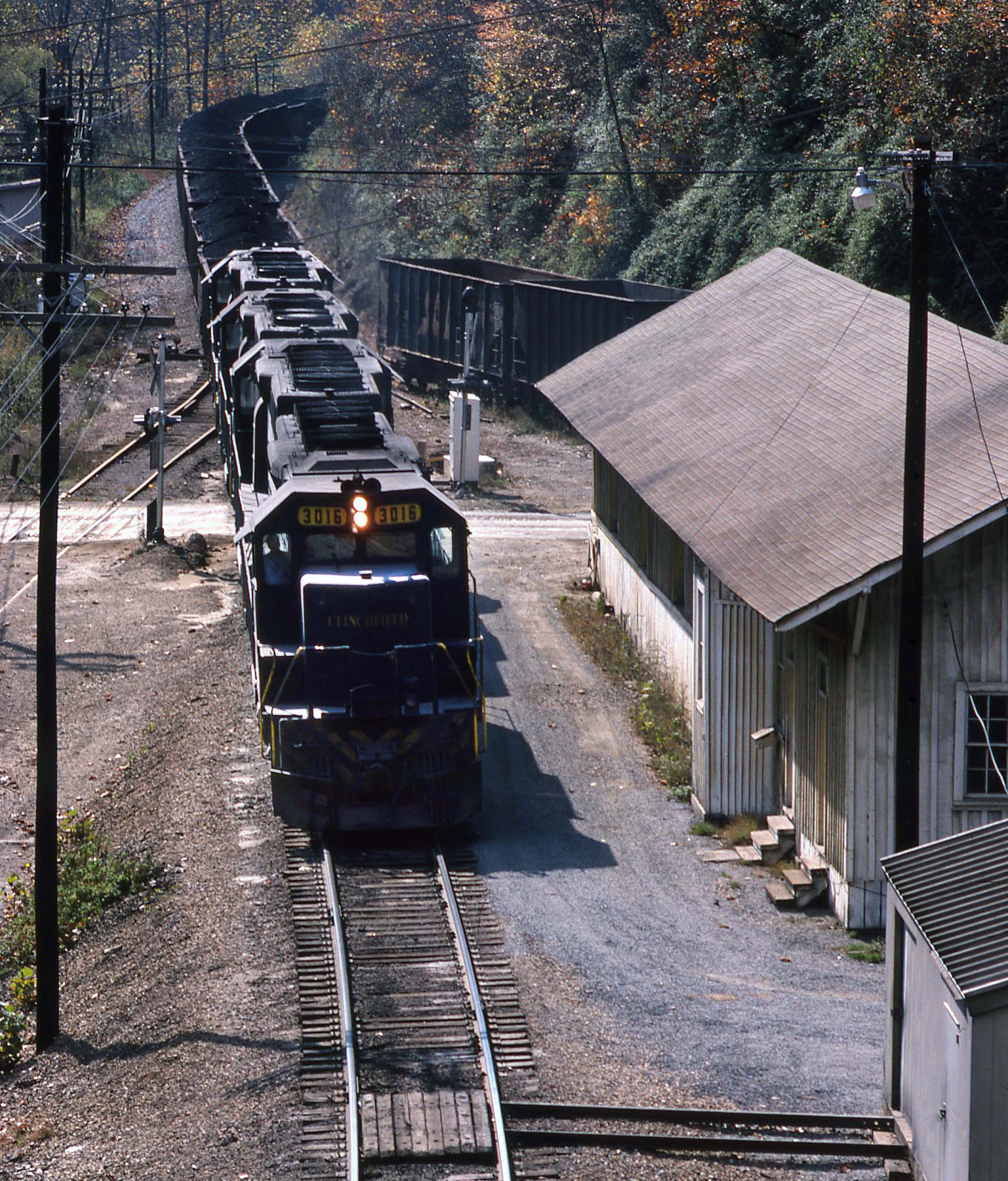 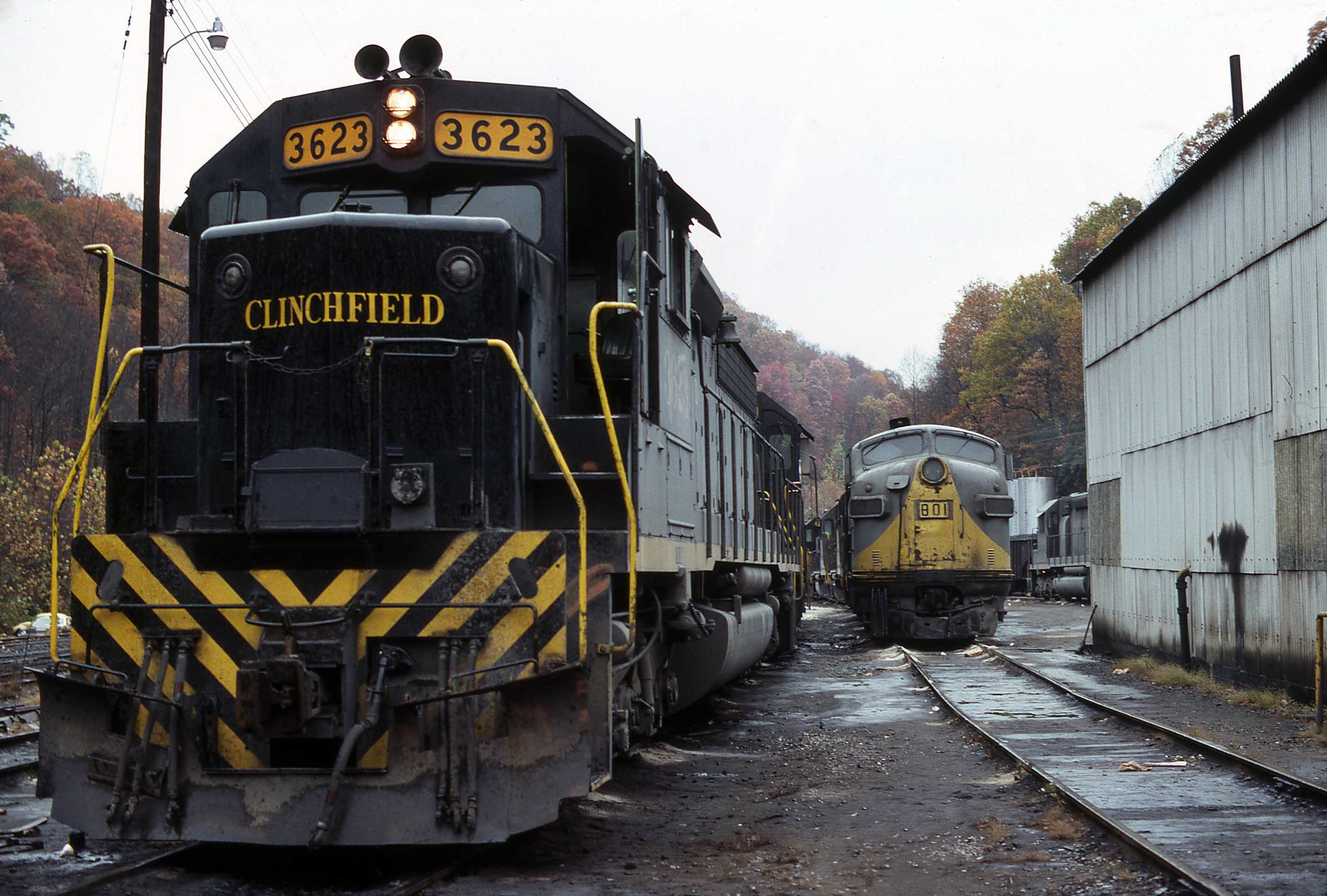 On a Sunday afternoon in November 1975, a light rain is falling, and the railroad is relatively quiet. Standing near the Dante diesel shop, two generations of Clinchfield motive power – burly EMD SD45-2 3623 and venerable CRR F7 801 – await their next call. The 3,600-horsepower SD45-2 was built in 1974; the 1,500-horsepower F7 was its elder by a quarter-century, having been built in 1948. 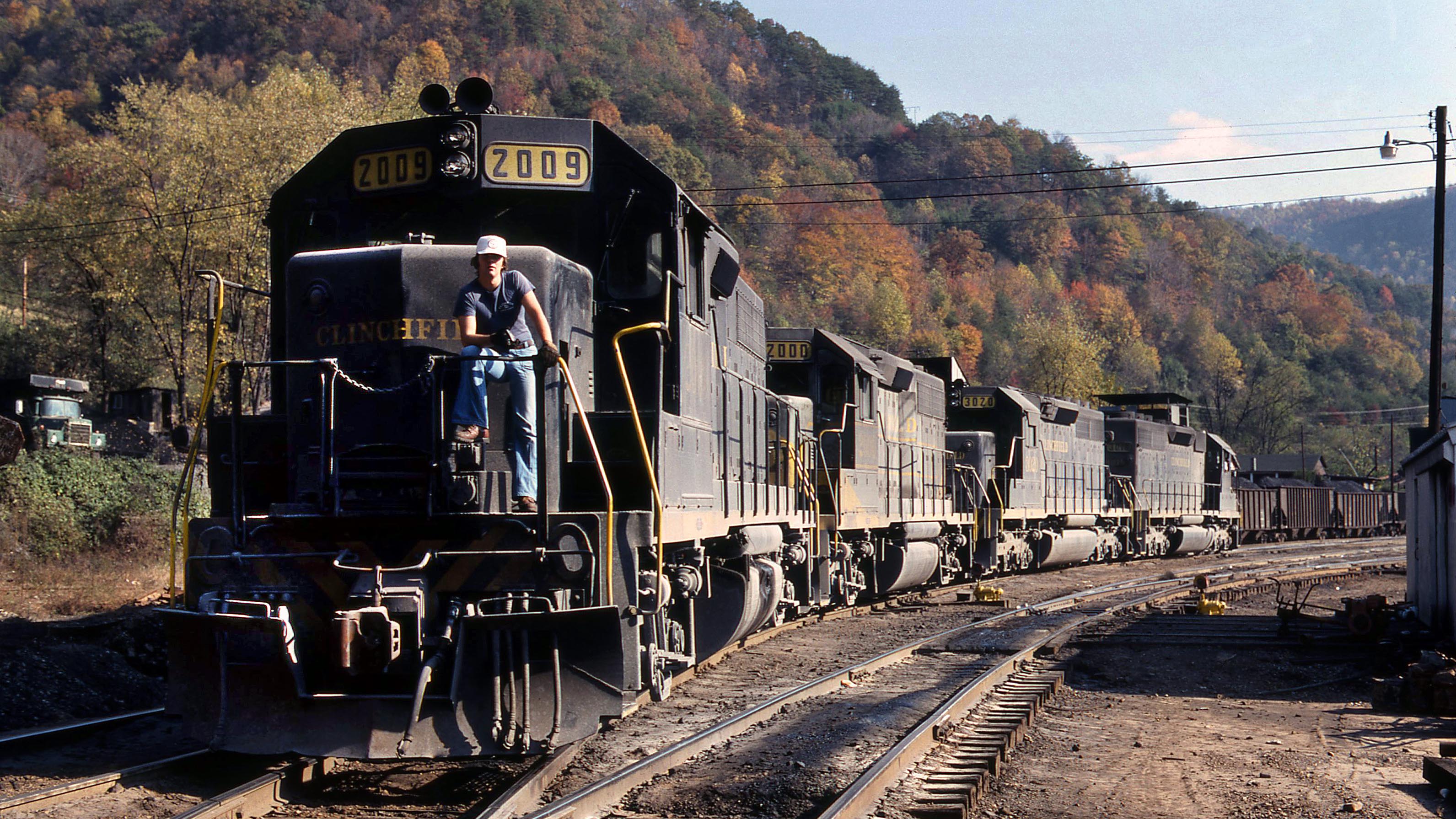 Elkhorn City, northern terminus of the Clinchfield, seldom lacked for action. On a blue-sky November 1975 day, a CRR crew is preparing to couple onto coal tonnage with a set of EMD diesels that include GP38s and SD40s (above). Amid the lingering last light of an autumn day, Chesapeake & Ohio EMD SD40 7517 and its sisters have coupled to a northbound manifest and soon will depart via C&O’s Big Sandy Subdivision. The building to the left is the Elkhorn City yard office (below). 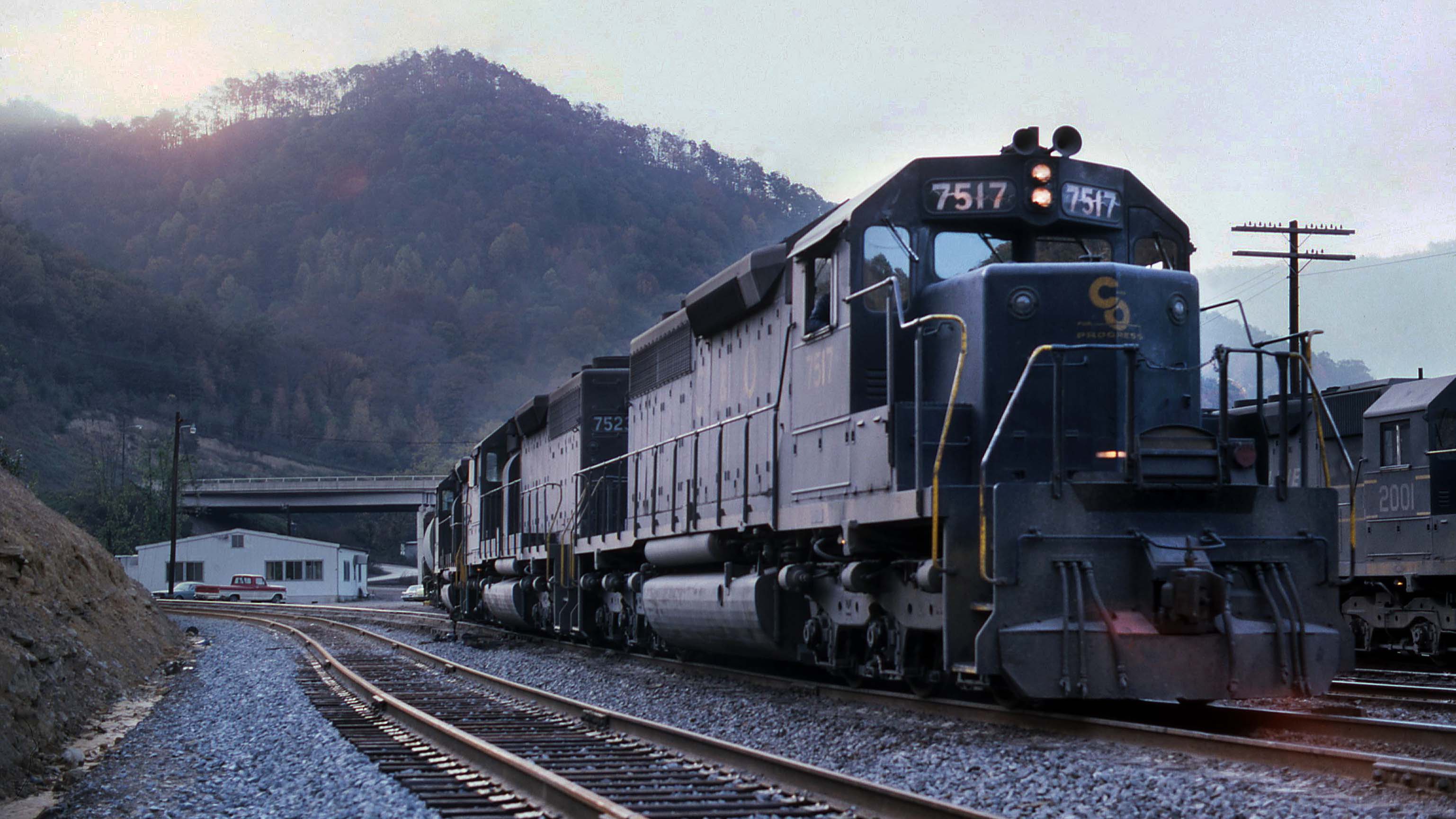 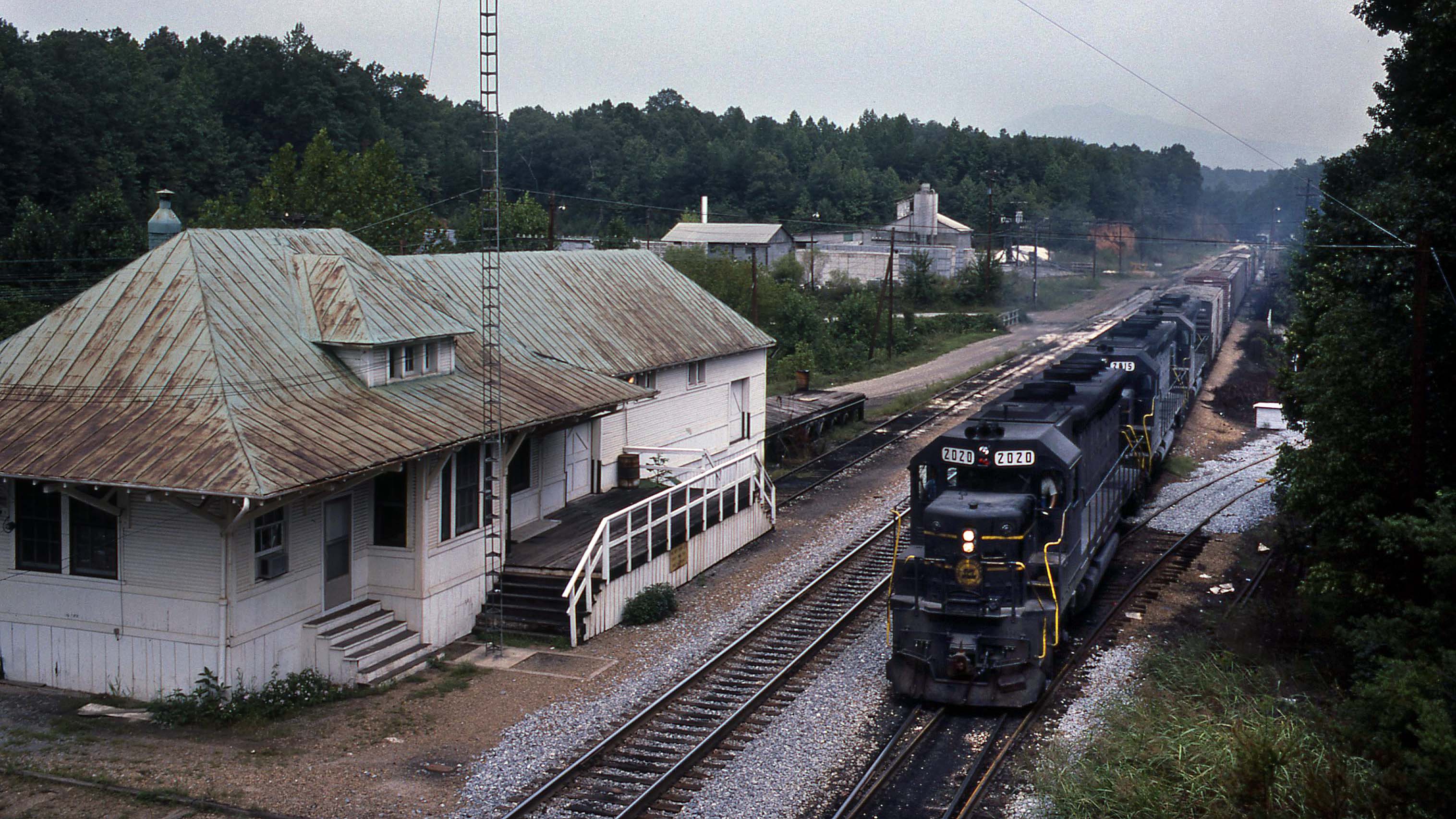 After his acquaintance with the Clinchfield in 1975, the author would visit often during the years before the CRR was merged into Seaboard System in 1983. On the south end of the CRR at Marion, North Carolina, a southbound manifest grinds by the aged depot in September 1976. SCL diesels were regular visitors on the CRR, and such is the case as SCL EMD SD45 2020 leads the way. Looming in the hazy distance are the peaks of the Blue Ridge. Today, the ex-Clinchfield serves as CSX’s Kingsport and Blue Ridge Subdivisions.