Santa Fe. The mere mention of the name evokes images of grandeur. After all, in our youth, how many of us watched spell-bound as a Santa Fe red-and-silver “Warbonnet” diesel model circled under our Christmas tree? The railroad’s full and rhythmic name – the “Atchison, Topeka & Santa Fe” – was destined to inspire an Academy Award winning song by the same name sung by Judy Garland in the Santa Fe-themed movie The Harvey Girls, and later recorded by a diverse array of artists, including Bing Crosby, Tommy Dorsey, Petula Clark, and Harry Connick Jr.

The Santa Fe Railway was, of course, more, much more than a beloved train under the holiday tree or popular song. The name Santa Fe recalls the glamourous Super Chief, and a supporting cast of elegant streamliners named El Capitan, Texas Chief, Grand Canyon, and San Francisco Chief, to name a few. It recalls departures from Chicago’s snug brick Dearborn Station and Los Angeles’ Spanish-style Union Passenger Terminal, mountain passes named Raton, Cajon, and Tehachapi, mile-a-minute freights, and silvery streamliners rushing aside Pacific surf toward San Diego. Over the decades, Santa Fe connected the great American West, calling upon the likes of 4-8-4s to power its elegant California Limited and high-horsepower diesels to hustle “the world’s fastest freight train” – the Super C – across its 2,200-mile Chicago-Los Angles main line in 40 hours. In short, the Santa Fe was the kind of railroad that claimed a special place in the heart of a train-watcher.

Founded in 1859 as the Atchison & Topeka and chartered to link its namesake cities by rail, in 1863 the railroad began its growth to greatest under the watchful eye of Cyrus K. Holiday. “Santa Fe” was added to its corporate name as the railroad aimed toward Santa Fe, New Mexico, which had long been a key center of trade in the Southwest. Over the next half-century, the AT&SF grew in both route miles and stature, reaching California and stretching deep into Texas.

By the late 1920s, the AT&SF had accumulated more than 13,000 route miles, and the railroad had become a steel freeway between Chicago and the Pacific Coast for both tonnage and passengers. Indeed, Santa Fe’s 2,224 route miles set between Chicago Dearborn Station and Los Angeles Union Passenger Terminal were the heartbeat of the railroad.

The coming of the diesel locomotive forever changed railroading, and the AT&SF was at the forefront of the industry’s transition to diesel motive power. Santa Fe’s soon-to-be-legendary Super Chief made its debut in May 1936 powered by Electro-Motive “boxcabs” 1 and 1A, then took streamliner form the following year with elegant Electro-Motive E1 diesels debuting the railroad’s timeless “Warbonnet” livery. The Super Chief, nicknamed the “train of the stars” given how often Hollywood celebrities climbed aboard, was the first of a fleet of Santa Fe streamliners that would capture the attention of the traveling public from the 1930s through the 1950s and into the 1960s. Santa Fe’s devotion to dieselization also included freight service, and the railroad during WWII put into service 320 Electro-Motive landmark FT diesels. In the decades that followed the arrival of the FT, AT&SF would build a diesel roster of extraordinary diversity and intrigue.

I was blessed to have first made my acquaintance, on a family holiday to California, before even stepping into kindergarten, and one of my first life memories is of Santa Fe’s stylish Alco PA diesels gleaming under the lights one night at Barstow, California. Over the following decades, my encounters with the AT&SF were frequent and cherished. The most revered of those memories are of a Christmas ride on the Super Chief, yet they also include recollections of standing in the lower vestibule of the El Capitan with the train’s conductor as he casually mentioned we were crossing Kansas at 100 mph, of standing trackside as the Super Chief and sibling El Capitan twisted their way up and over Raton Pass, of countless train-watching days at Joliet (Illinois) Union Station, of lanky Alco RSD15 “Alligator” and EMD SD24 diesels dragging heavy tonnage over a foggy Cajon Pass, and of the latter-day Super C racing through the farmlands of Illinois at 70 mph with one of Santa Fe’s Bicentennial EMD SD45-2s on the point.

If the Santa Fe of my youth was mesmerizing, the Santa Fe in its final years was no less captivating. In its final years, Santa Fe called upon burly EMD and GE diesels dressed in blue and yellow colors, and yes, a reborn edition of its silver-and-red Warbonnet, to hustle manifest freight and a string of priority intermodal traffic across the West. Indeed, if one memory challenges my Yuletide ride on the Super Chief for supremacy, it was the opportunity (while on a media assignment) to ride the cab of Santa Fe’s ultra-hot Bay Area-Chicago intermodal – renowned Train No. 991 – from Kansas City to the Windy City. Truth be told, the AT&SF was magical whatever the era.

I would be less than candid if I said the day in 1996 when Santa Fe was merged into BNSF wasn’t melancholy for me. Afterall, a lifetime railroad acquaintance was becoming a “Fallen Flag.” And yet, while Santa Fe has disappeared as an independent entity, its spirit surely is alive and well. Its main line across the southwestern tier of the American West remains bustling with BNSF intermodals and is host to Amtrak’s Southwest Chief. Its ribbons of steel still glisten bright silver atop Cajon and across the scenic Arizona Divide, and its scenic steel path along the Pacific shore remains alive with Amtrak (and Metro Link and Coaster) passenger conveyances. The name may have changed, but the magic and drama remain undiminished. Cyrus K. Holiday would surely be proud.

The Atchison, Topeka & Santa Fe: Across the decades, the railroad delivered extraordinary experiences and put a special claim on the heart of train-watchers, including the author. In a spectacle of color and sound, Warbonnet-clad Santa Fe EMD GP60M 101 roars through McCook, Illinois, on August 25, 1990, leading intermodal train No. 198 bound from Chicago to California’s Bay Area. Photograph by Gary Dolzall. 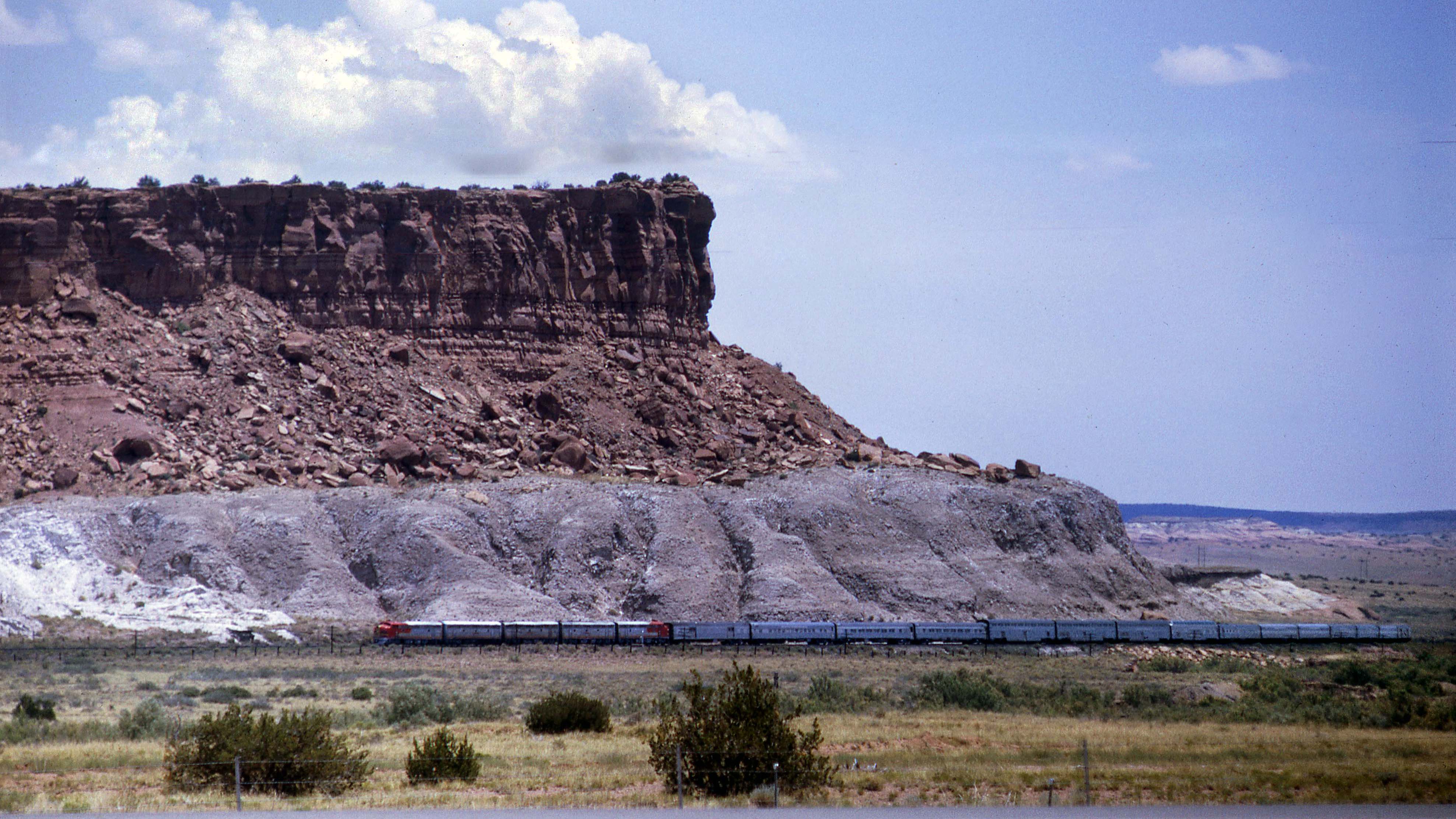 Quintessential Santa Fe: In a scene that captures the essence of the AT&SF, the San Francisco Chief, powered by a classic set of red-and-silver Warbonnet-dressed Electro-Motive F-units, glides below towering New Mexico cliffs as it crosses the great American West. Photograph by Gary Dolzall. 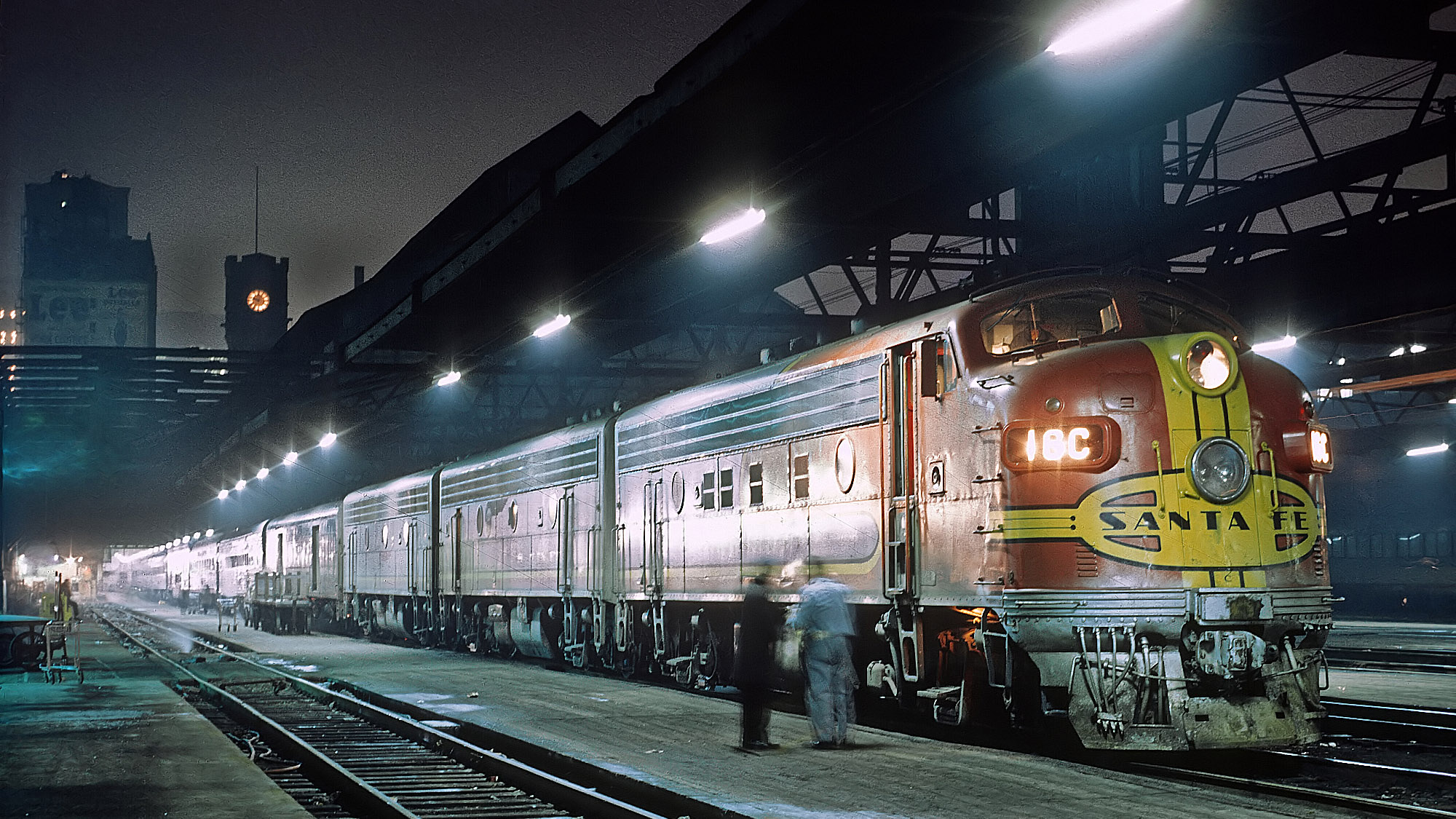 From its opening in 1883 until 1971, snug brick Chicago Dearborn Station and its trainshed platforms marked the beginning of countless westward journeys for Santa Fe patrons. On a night in February 1968, Santa Fe’s Kansas City Chief awaits its departure from Chicago. Photograph by Roger Puta. 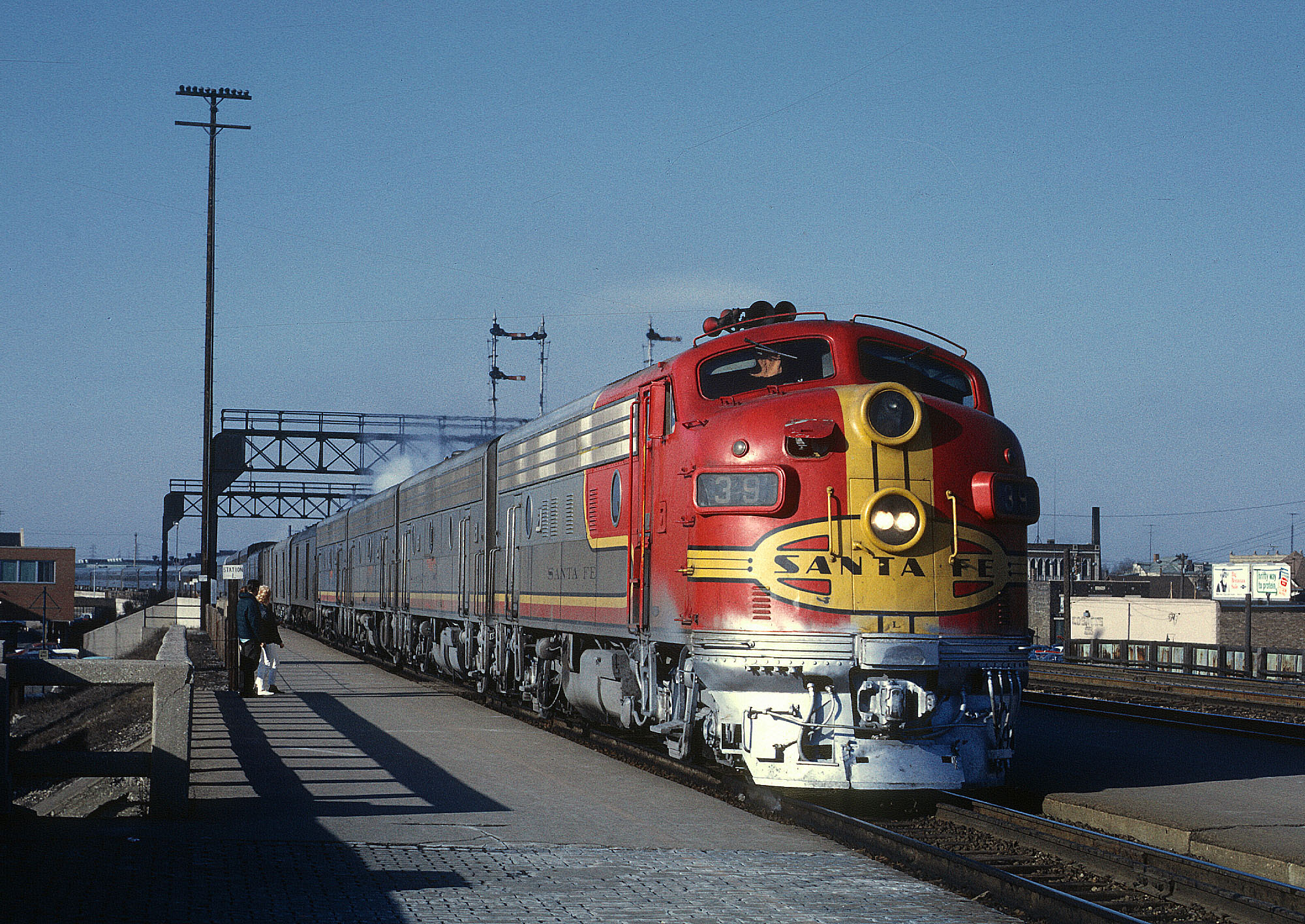 For scores of train-watchers and photographers over the years, a favorite location was Joliet (Illinois) Union Station, 37.5 miles west of Chicago. From the platforms at Joliet, one could watch Santa Fe and Gulf, Mobile & Ohio trains clatter across the diamond crossing with the Rock Island. Under Joliet’s handsome semaphore signals, Santa Fe’s westbound San Francisco Chief makes its Joliet arrival. Photograph by Roger Puta. 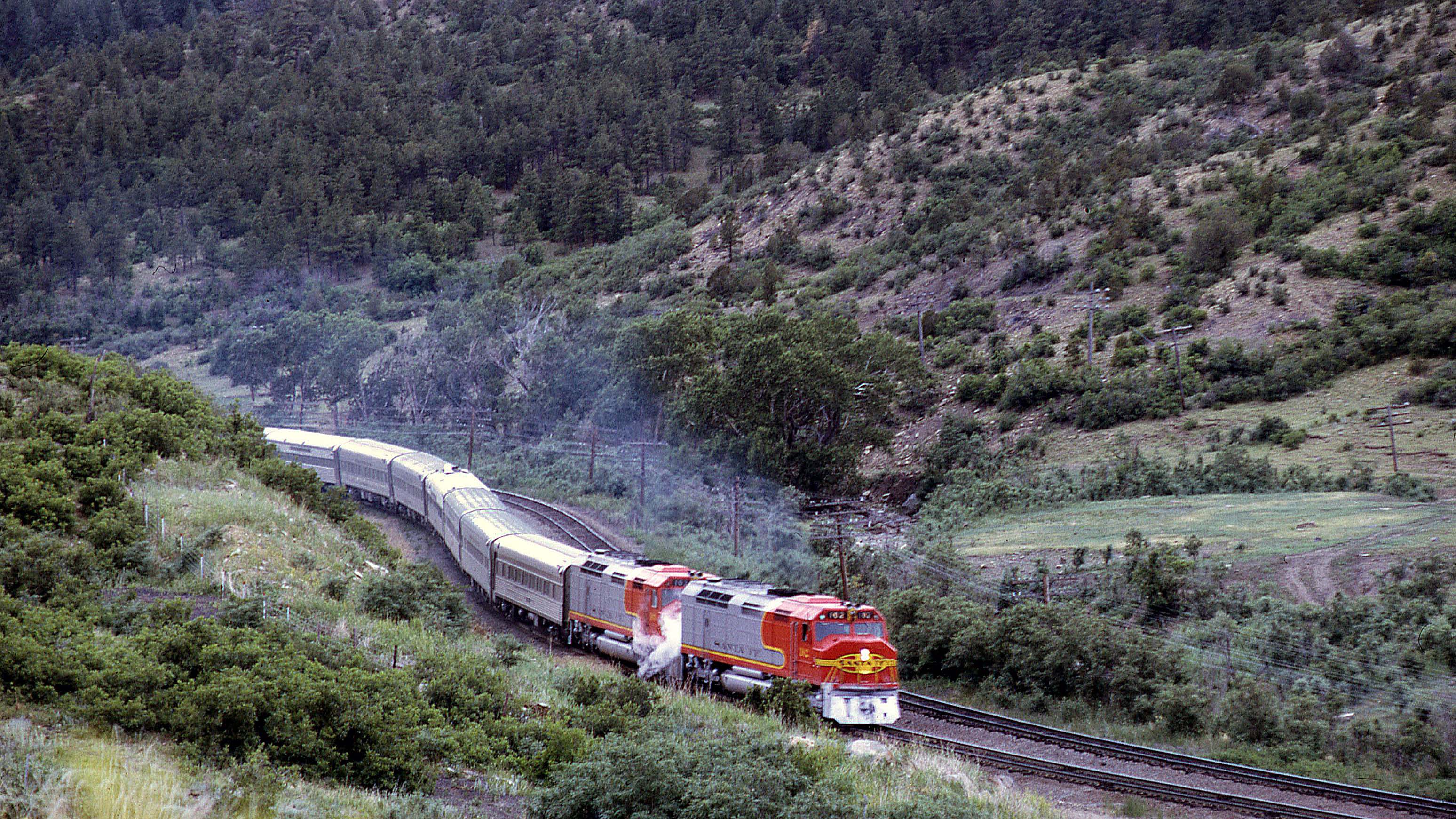 Raton! Santa Fe’s magnificent Super Chief, behind a pair of then-new EMD FP45s, twists its way through rugged Raton Pass in July 1968. Stretched across the Colorado-New Mexico border between Trinidad (Colorado) and Raton (New Mexico), the pass featured grades of up to 3.7 percent and the Santa Fe’s highest elevation – 7,588 feet above sea level at its summit. Photograph by Gary Dolzall. 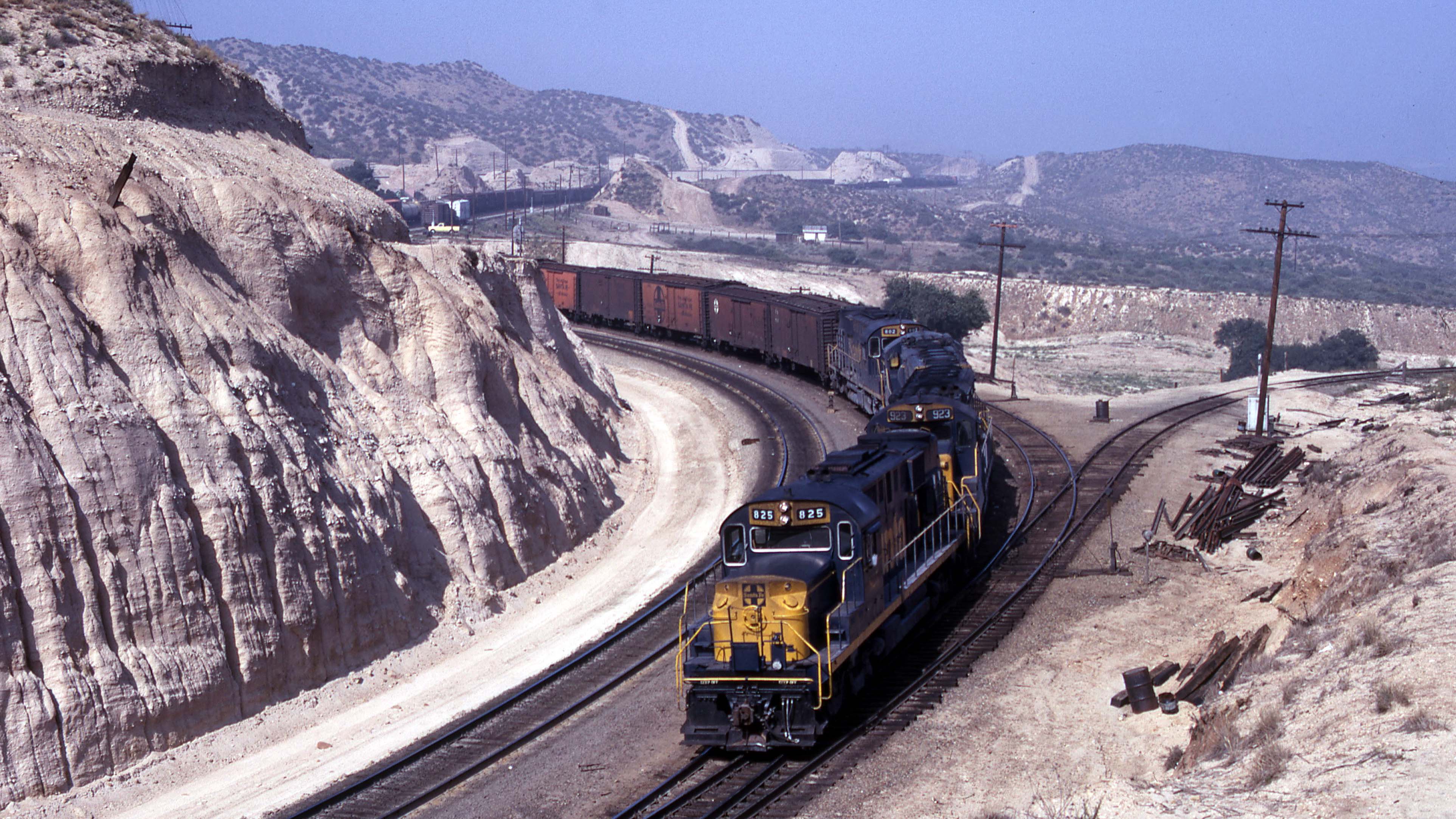 Along with Raton Pass, the Santa Fe experience included trains battling two of California’s legendary mountain crossings. In a classic Santa Fe scene, a Santa Fe freight arrives at the summit of Cajon Pass (above) in 1969 with a memorable AT&SF Alco RSD15 “Alligator” in the lead. Photograph: Dolzall collection. Farther north and two decades later, a Santa Fe intermodal twists through Walong atop Tehachapi Pass (below). Santa Fe was granted trackage rights on Southern Pacific’s Tehachapi line in 1899. Photograph by Roger Puta. 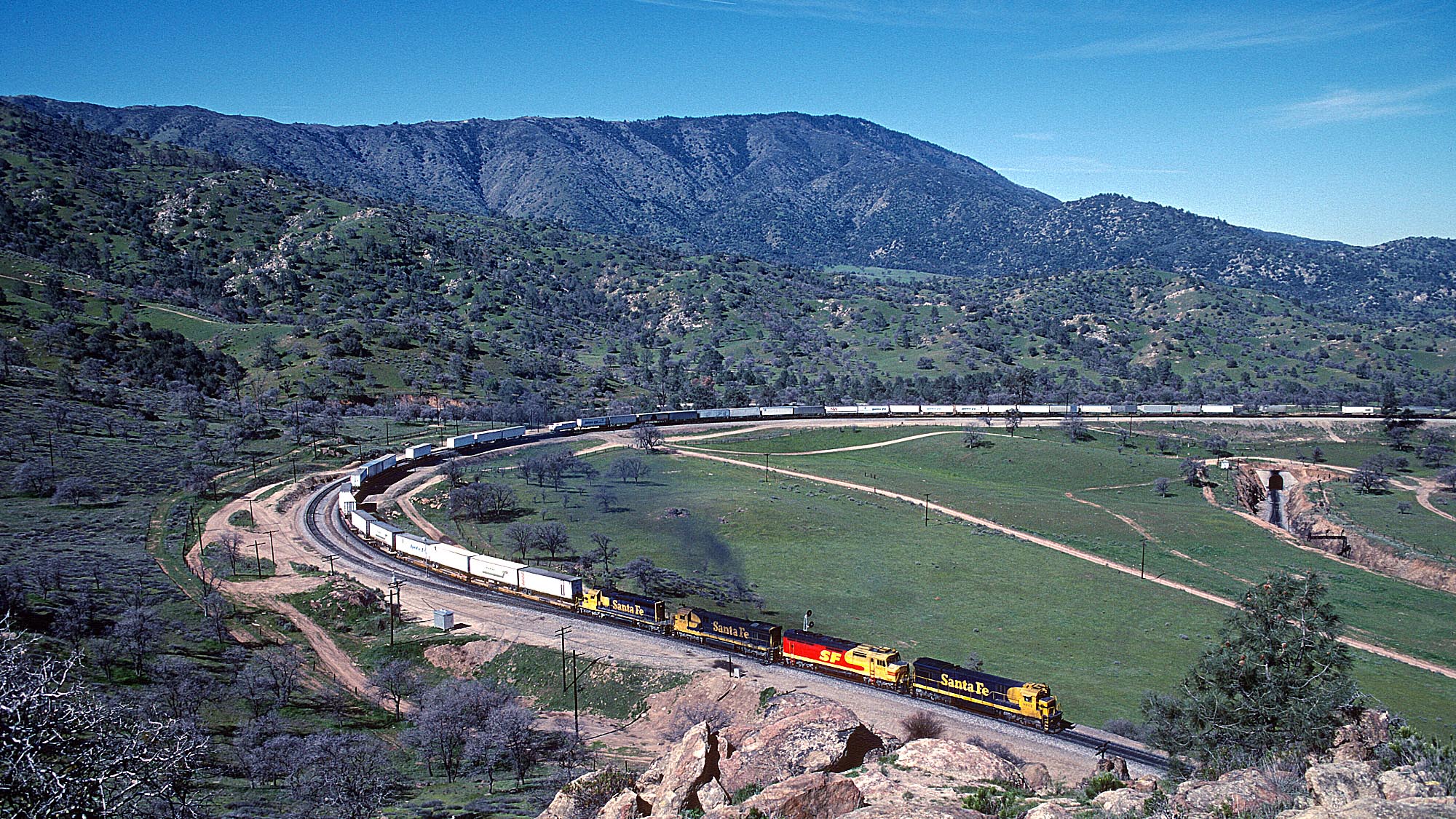 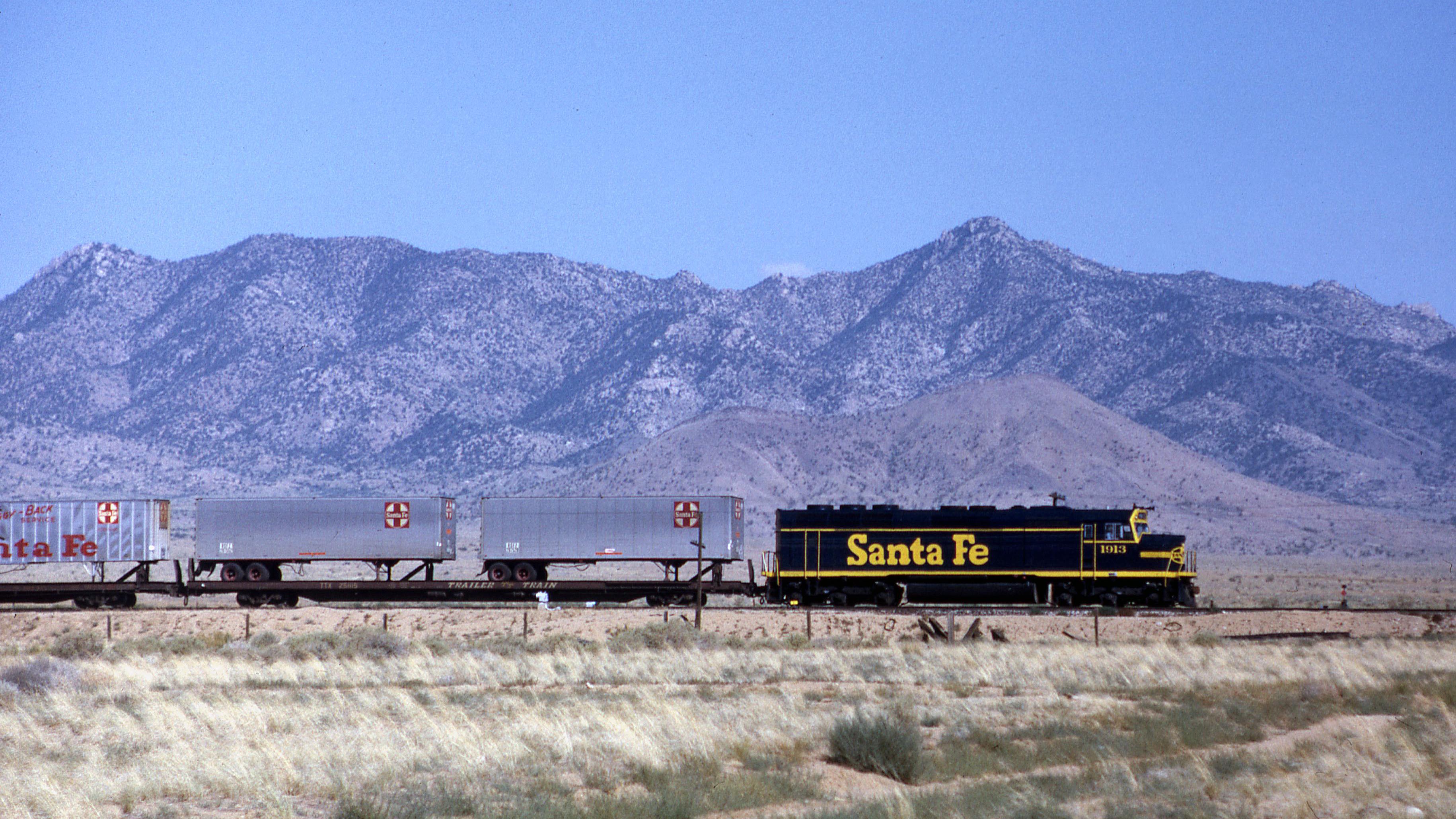 Powered by a single potent, 3,600-horsepower Santa Fe blue-and-yellow EMD F45, a short edition of “the world’s fastest freight train” – the Super C – races through desert country near the California-Arizona border in July 1968. The Super C made its debut in January 1968 with a 40-hour schedule to cross the 2,200 miles between Chicago and Los Angeles. Photograph by Gary Dolzall. 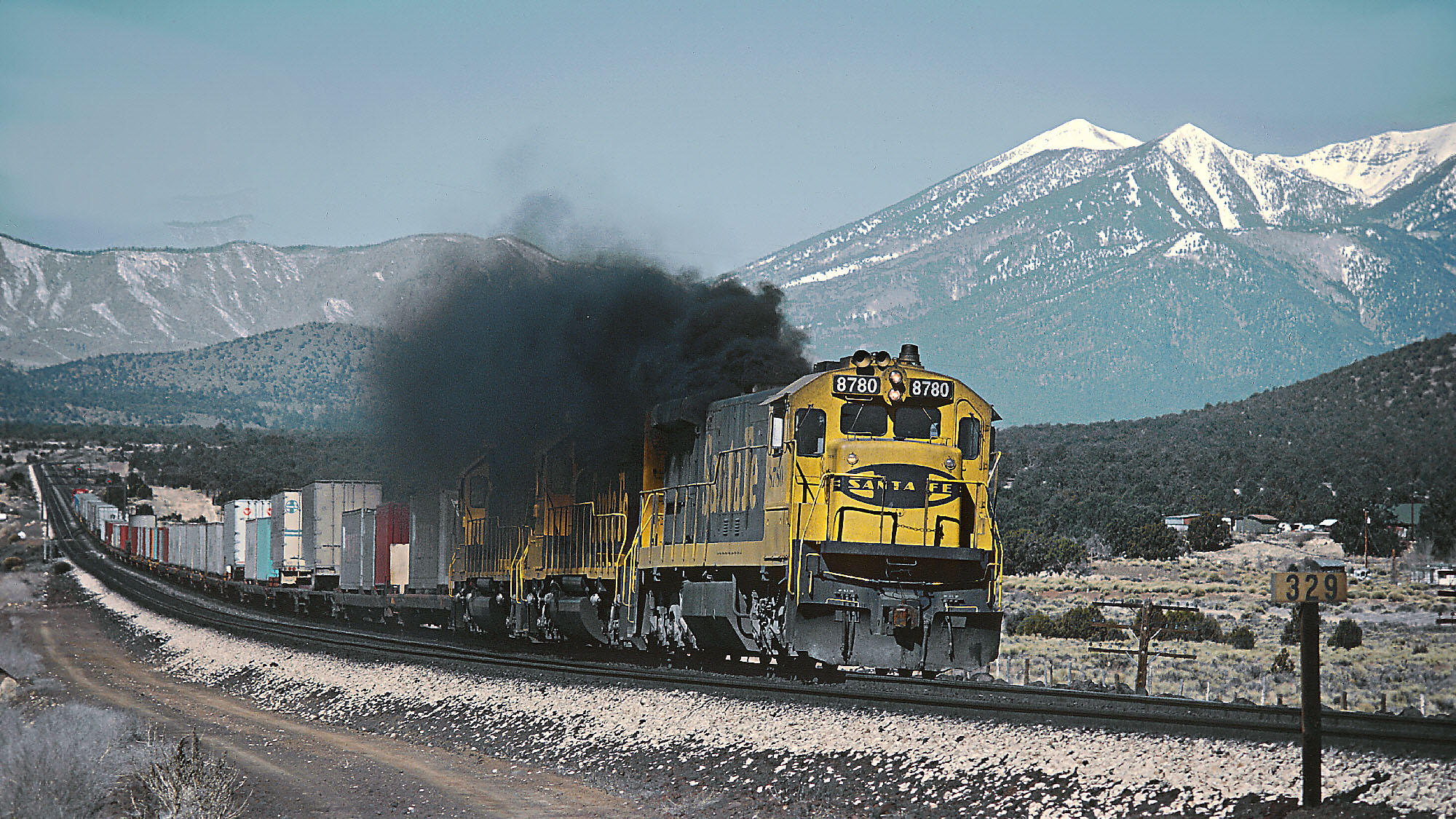 Long a popular spot for Santa Fe photography was the swale at Milepost 329 along the Arizona Divide (Seligman Subdivision) at East Darling, which provided a dramatic railroading scene with the snow-dressed Kachina Peaks standing in the distance. Hustling an intermodal train, the engineer has opened his throttle, resulting in a plume of exhaust from AT&SF General Electric U36C 8780. Photograph by Roger Puta. 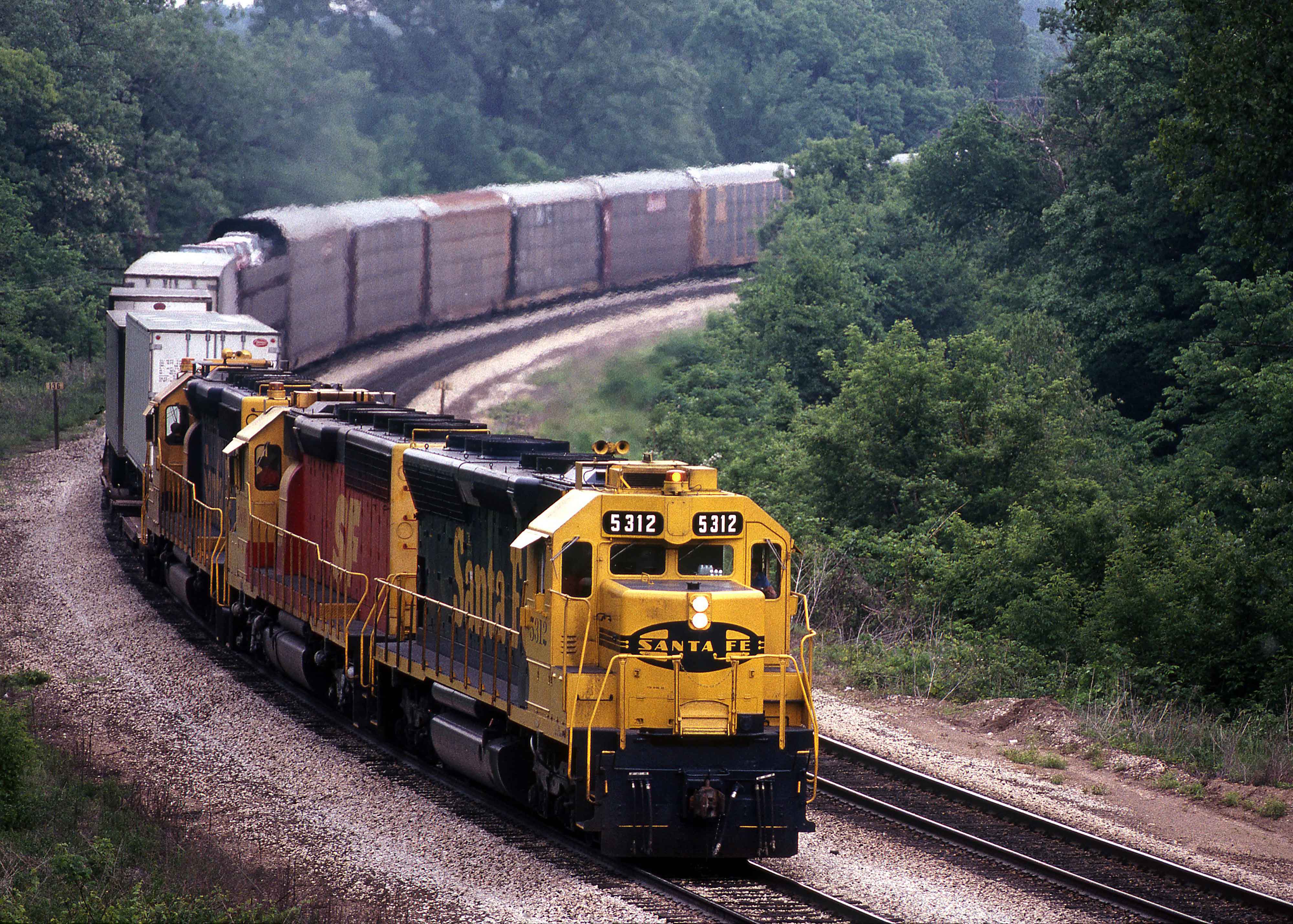 In its final independent years, the Santa Fe called upon burly EMD and GE diesels dressed in blue and yellow colors, and a reborn edition of its silver-and-red Warbonnet, to hustle manifest freight and endless strings of priority intermodal traffic. At famed Edelstein Hill near Chillicothe, Illinois, in 1988, Santa Fe 5312, a remanufactured EMD SD45, heads intermodal and auto traffic (above). Racing through remote, rural Ethel, Missouri, in 1990, Santa Fe Warbonnet EMD GP60M 108 (below) and kin have charge of Chicago-to-Los Angeles Train 188. Both photographs by Gary Dolzall. 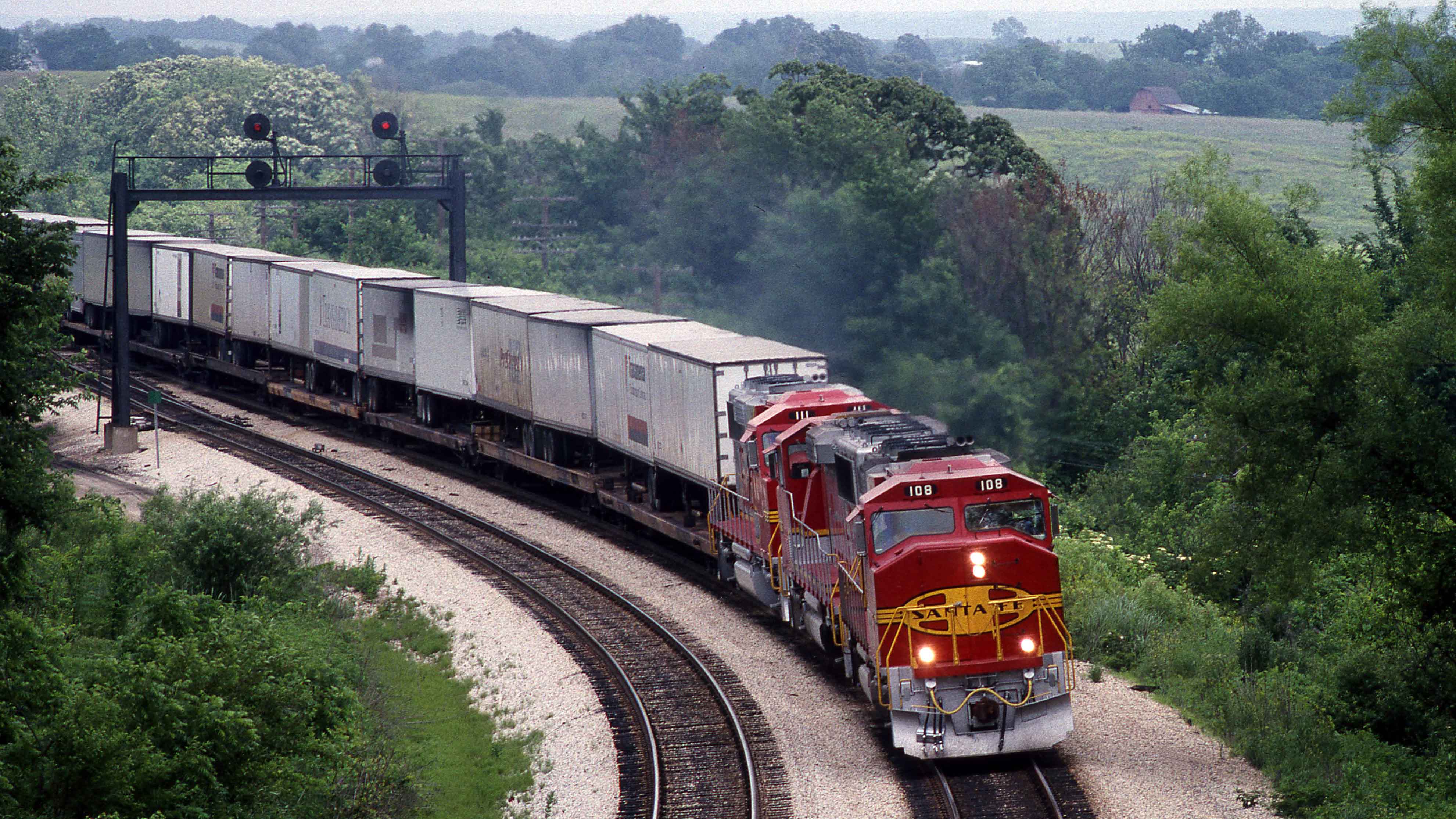 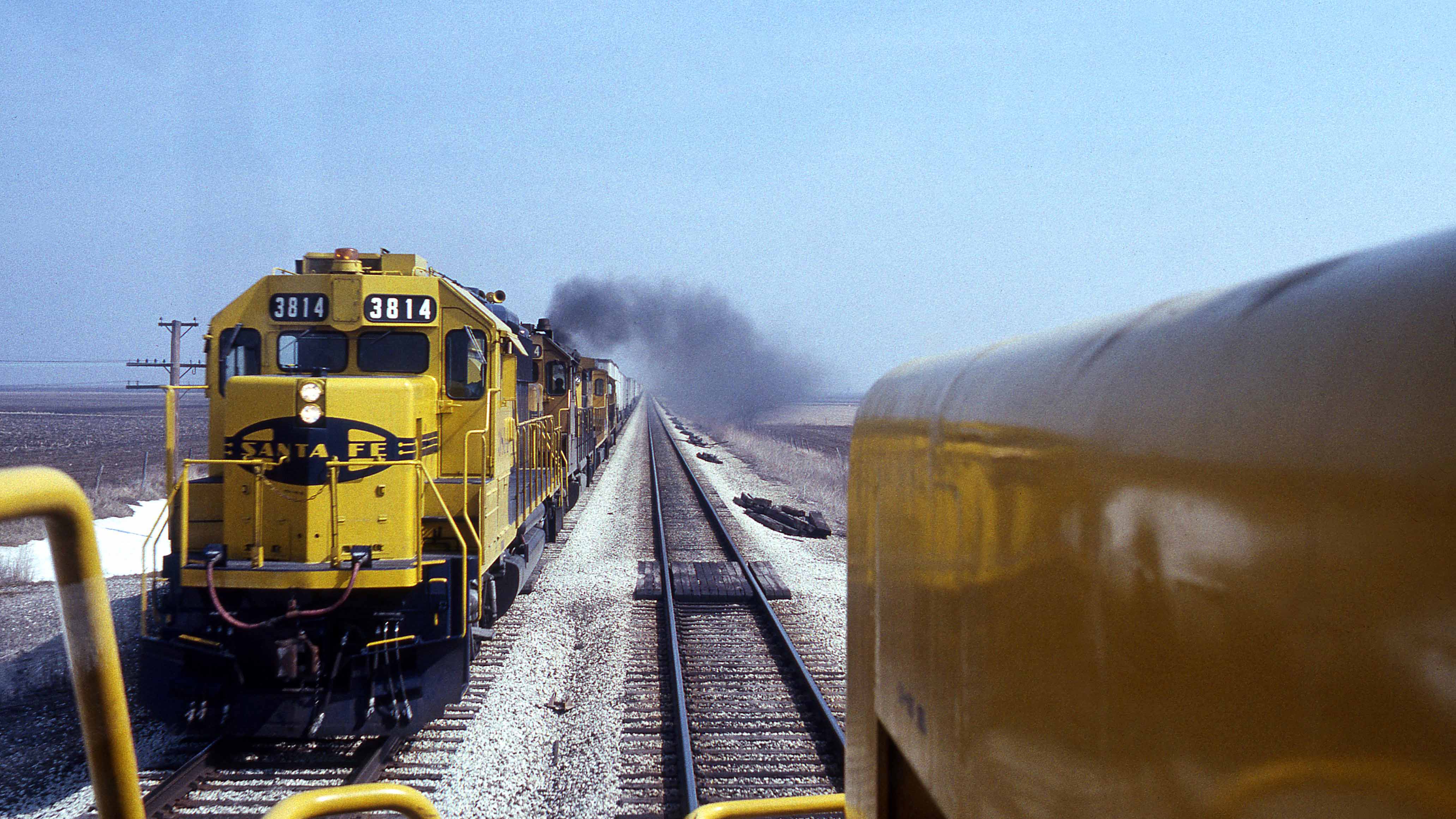 Meet of the hotshots: In a scene taken from the conductor’s seat of Santa Fe GP50 3811, eastbound AT&SF intermodal Train 991 meets Santa Fe Train Q-NYLA racing west behind GP50 3814. The location is near Leeds, Illinois, the date is March 11, 1989, and Bay-Area-Chicago Train 991 and the Q-NYLA (operated jointly by Conrail and Santa Fe from the New York City area to Los Angeles) are two of the hottest trains on a hot railroad. Photograph by Gary Dolzall. 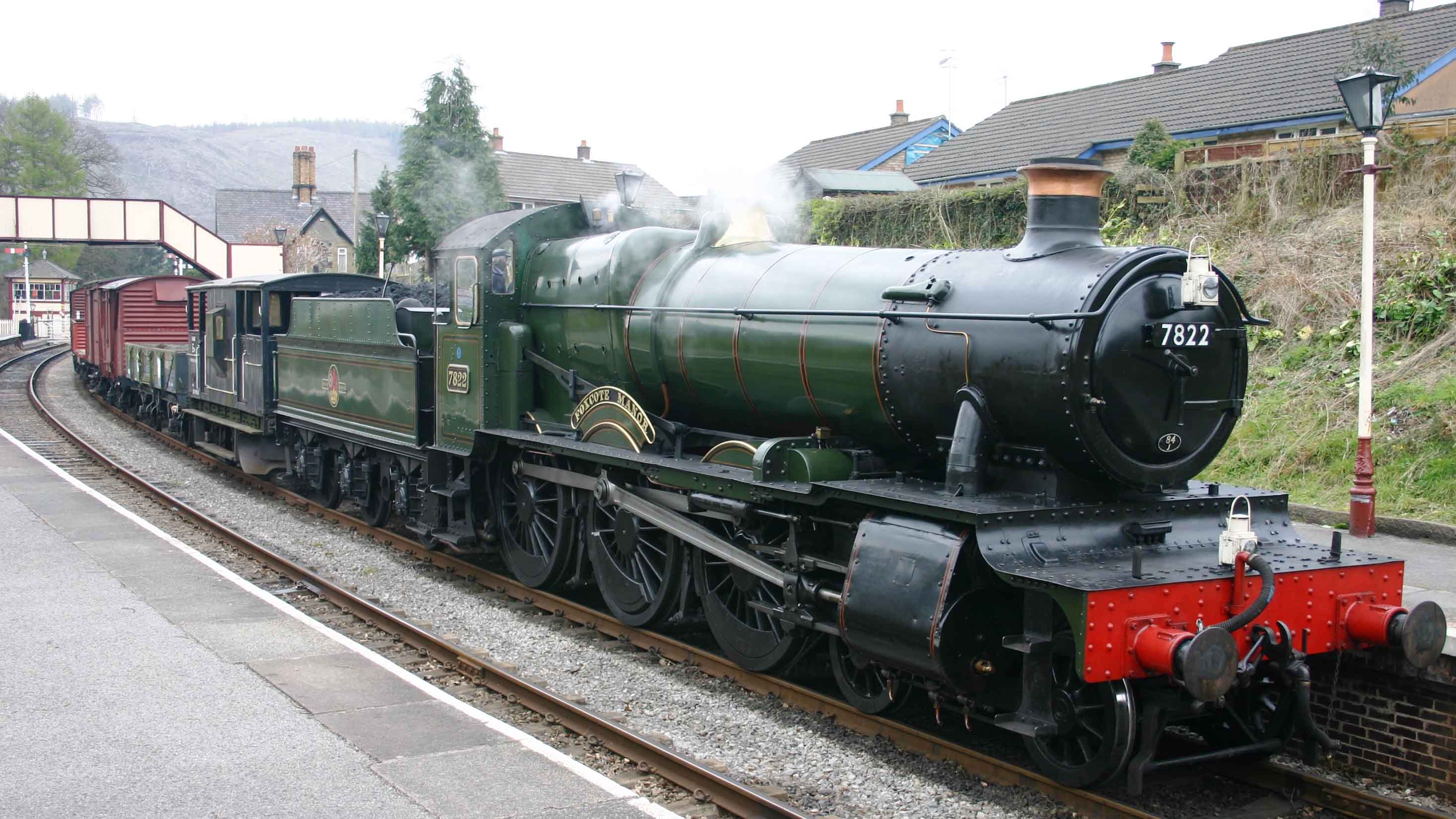 Allen Jackson takes a look at the Llangollen Railway, including photographs from its recent past.