In 2007, the British Library began their presence on Flickr, the popular online image sharing site, in a bid to make a number of images from their extensive book collection more widely available to the public. Today, with well over 1 million images from around 65,000 books, the collection has become a valuable digital archive whose use is very much encouraged. As well as enabling others to view, use and share the images, many of which remain out of copyright or with ‘no known copyright restrictions’, the Library is keen to learn more about the material it holds, including the books and images that have been digitised for Flickr.

Below, we take a look at a number of railway-related images from the collection, to showcase the variety of material available for Railfans. A good proportion of material stems from the 19th century, when railways and railroads were beginning to spread across the globe and as a result, some fascinating glimpses into the railway’s early days can be enjoyed by Railfans of today. 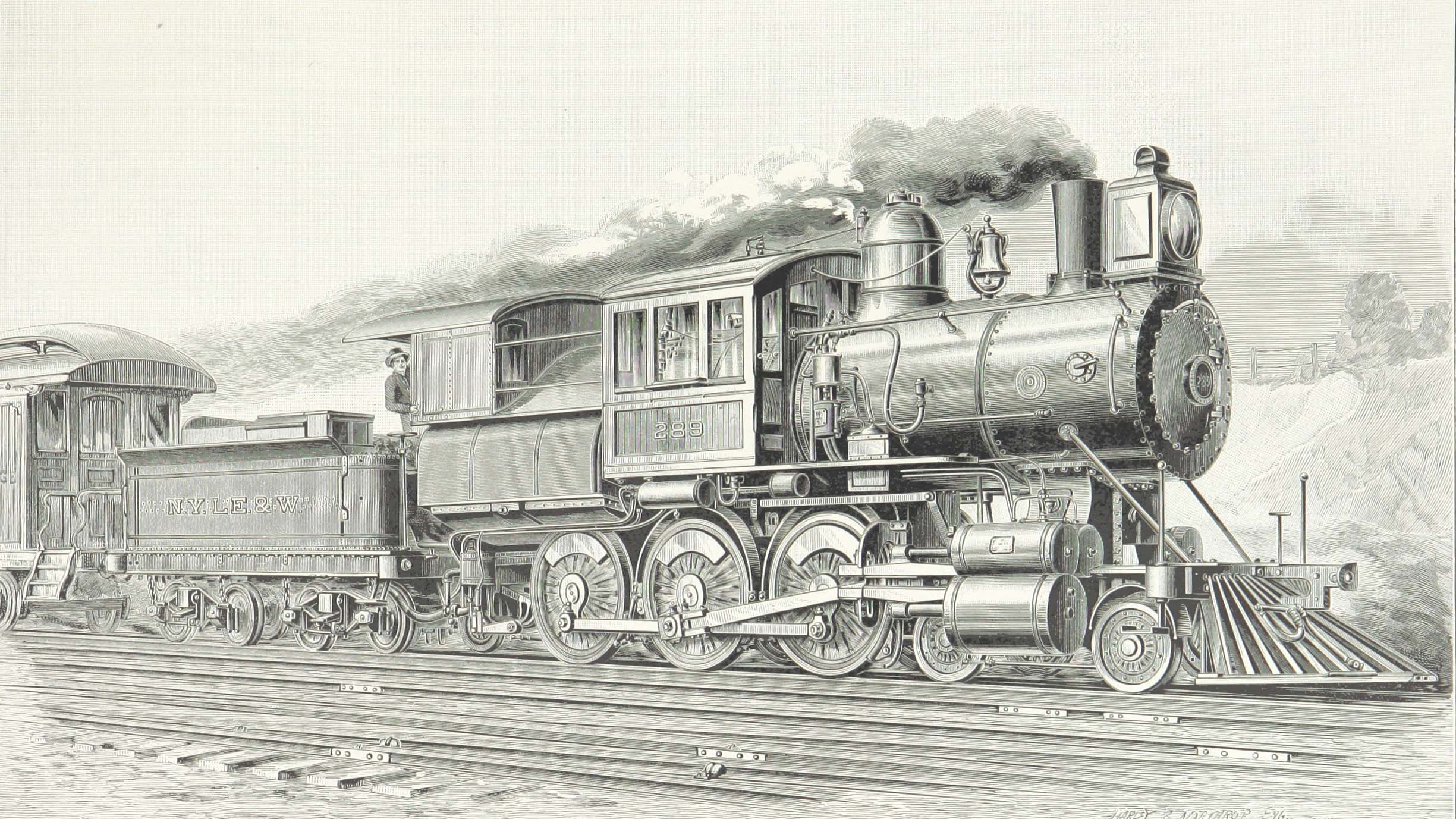 This striking illustration (above) comes from the 1894 title: The United States of America. A study of the American Commonwealth, its natural resources, people, industries, manufactures, commerce, and its work in literature, science, education and self-government. And represents an example of a Compound Locomotive, No.289 run by the New York, Lake Erie & Western Railroad, as seen by the lettering on the tender. This chapter of the book details much about the railroads of the United States including the ‘Perils of Railway Service’. 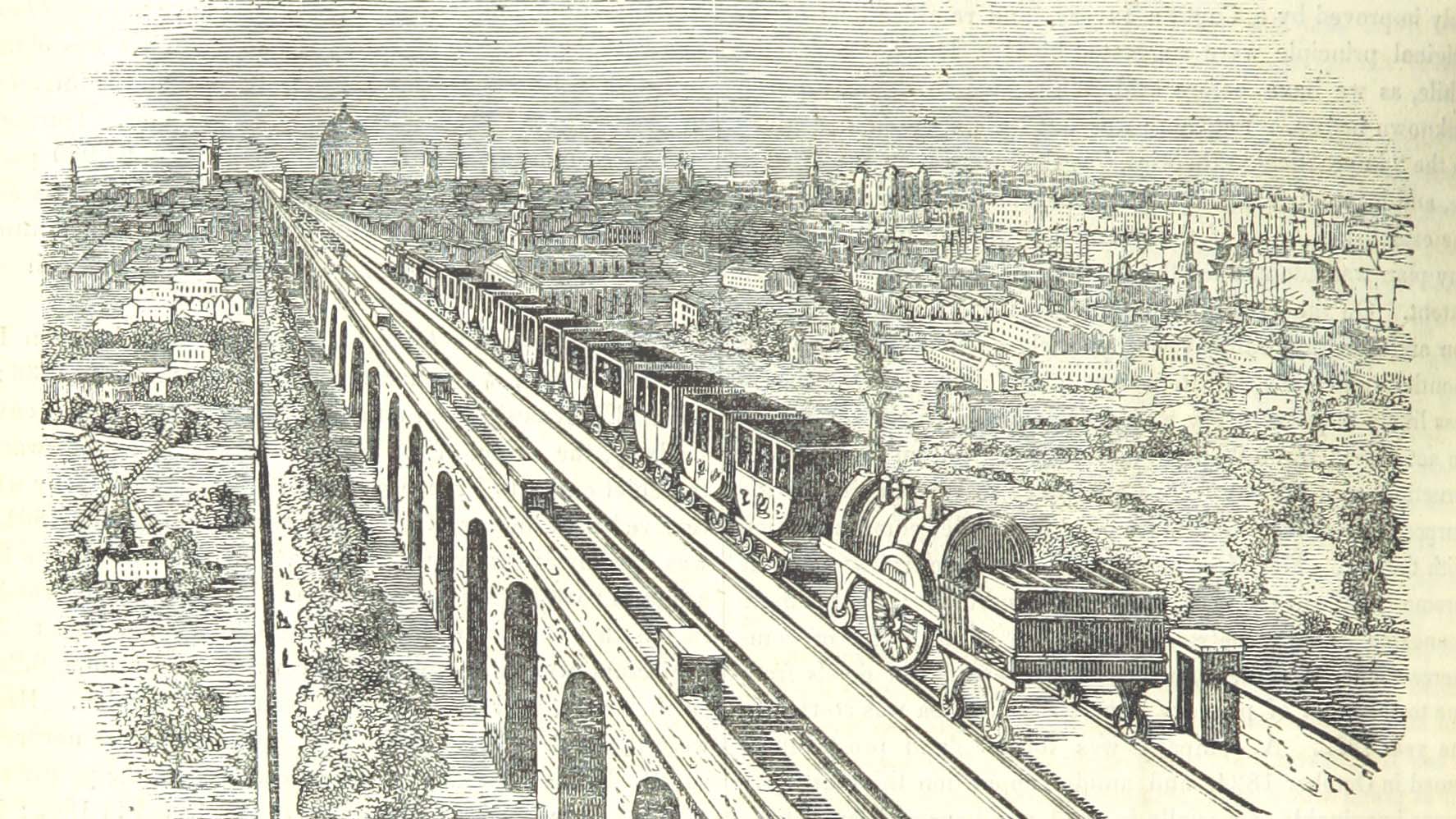 From earlier still is this image (above) of The Greenwich Railway in England, with the distinctive dome of St Paul’s Cathedral on the horizon. The famous Tower of London can also be seen centre-right of the image against the bank of the River Thames. This book, The Wonders of The World in Nature and Art, from 1839 shows one of the very first styles of locomotive with a train of early carriages pulled by a locomotive not too dissimilar to Robert Stephenson’s Rocket which was built a decade earlier. This part of the line today sees trains heading in and out of London Bridge Station at the foot of the Shard. 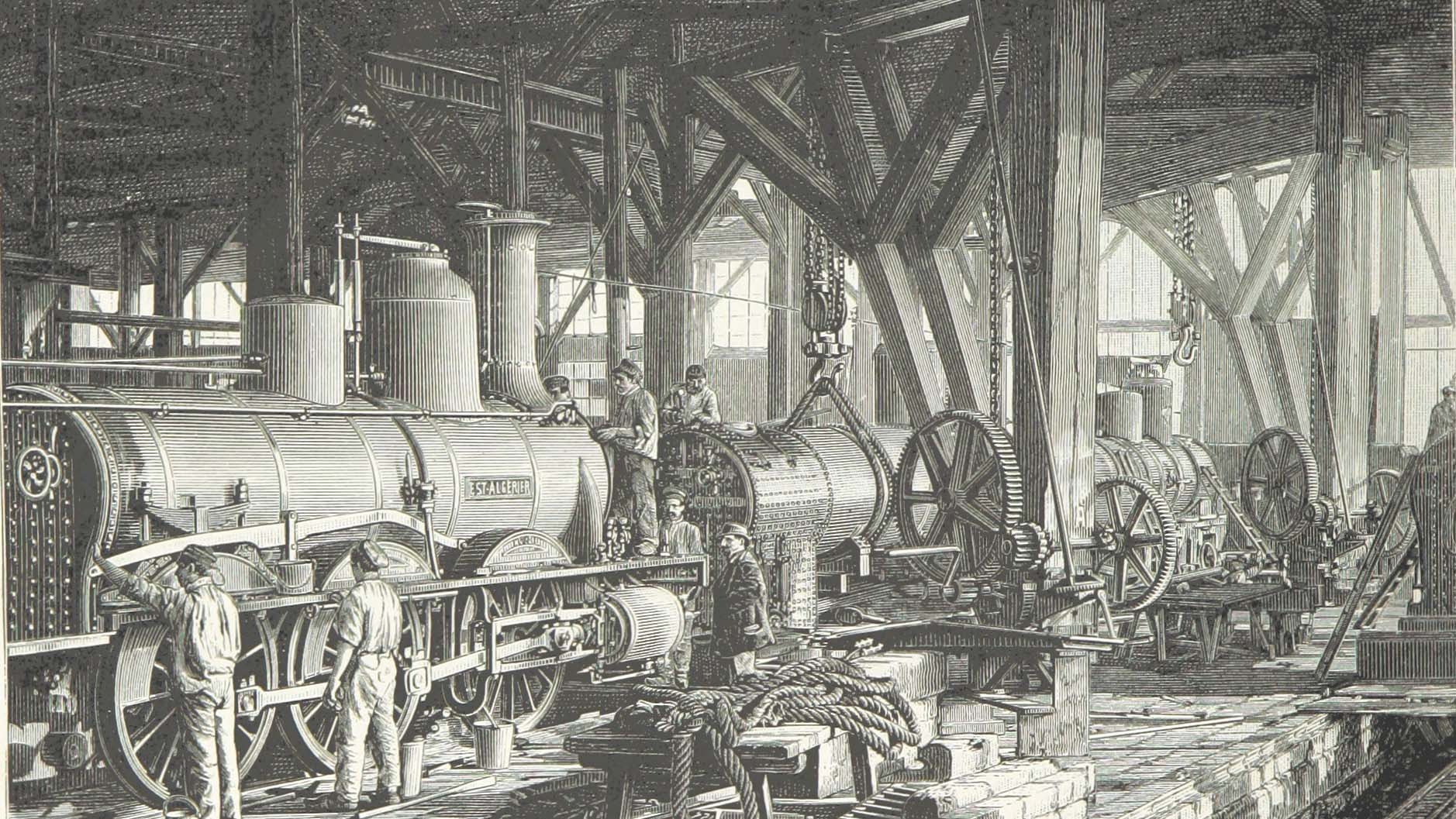 The British Library holds many works in languages other than English and this picture (above) is from a French language work from 1889: L'Alsace; le pays et ses habitants (Alsace; The Country and its Inhabitants). Alsace being a region of eastern France that borders Germany and Switzerland. It depicts the workshops of the Alsace Construction Company, which built locomotives as well as firearms and mining equipment in the city of Mulhouse, today famous for having the largest railway museum in the world. 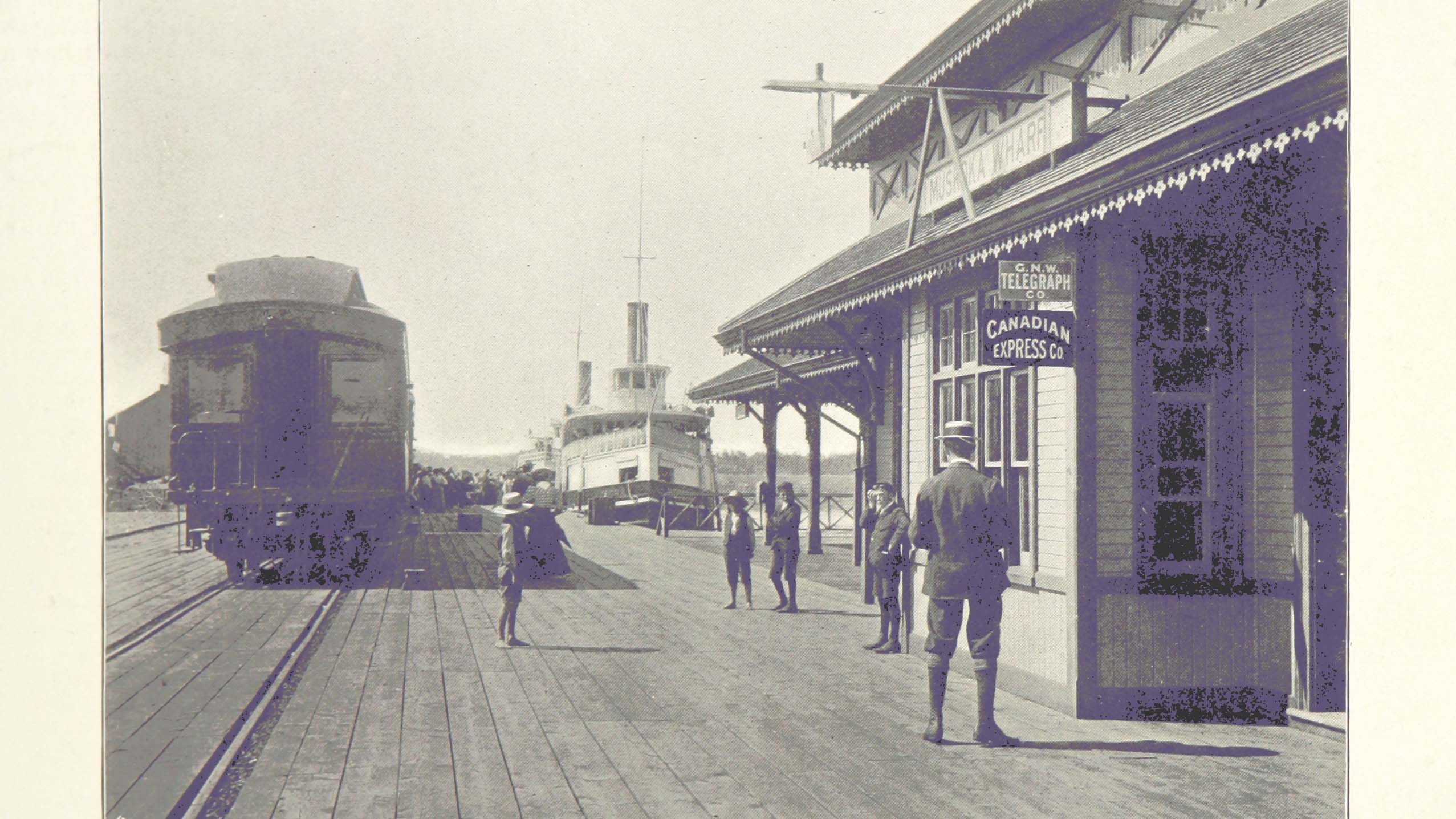 Early photographs also appear in a number of publications in the collection, such as this one from a book detailing the area around Muskoka, Canada. Here a train is seen at Muskoka Wharf connecting to a boat service. The book, which contains many more photographs of the area, dates from 1899. 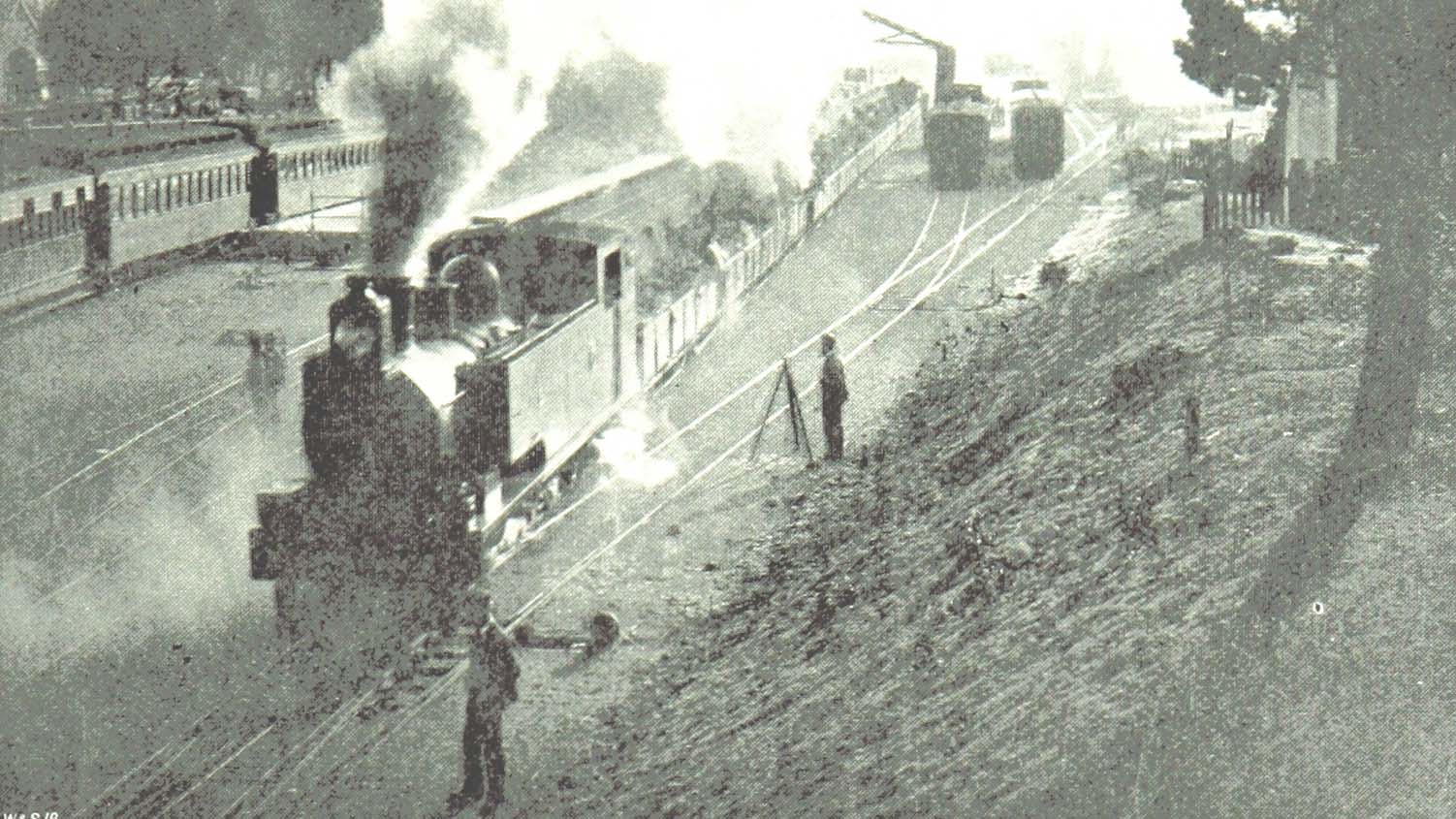 Many of the books in the collection that feature railway illustrations and photographs are 19th century travel and guidebooks aiming to bring the world into the homes of those with an interest in other parts of the globe. This image (above) shows Perth Railway Station in Western Australia. Two men can be seen standing right next to the track, something simply unthinkable today, with one using a tripod of some sort either for measuring equipment or early photography. The book: My Fourth Tour in Western Australia by Albert F. Calvert is from 1897. 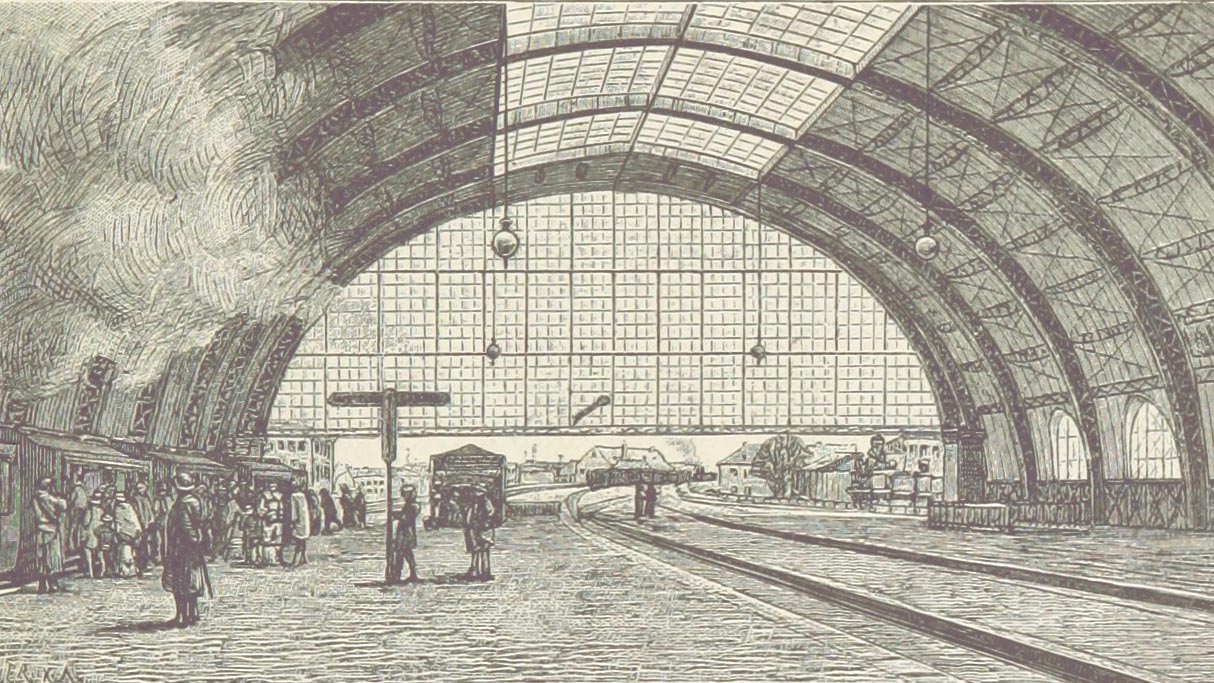 Showcasing the latest engineering feats during the early spread of railways across the globe also made for fascinating reading at the turn of the 20th century. Berlin’s Alexanderplatz Station was opened in 1882 and this book from just 3 years later shows the magnificent roof. Today this station is a major transport hub in the city. 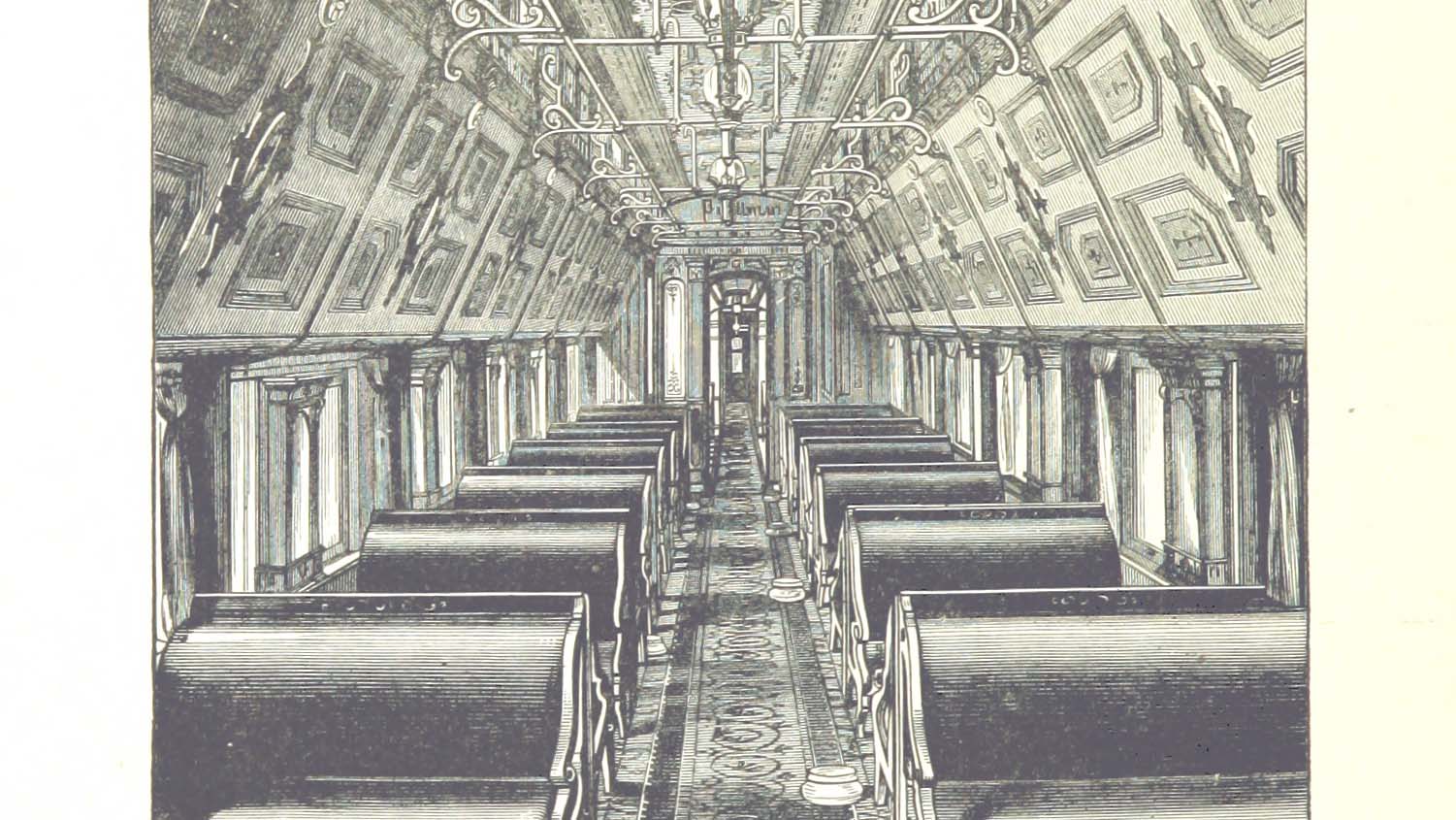 The joy of the journey was, and remains, a popular way to enjoy the world’s railways, particularly whilst travelling in the luxury afforded by this sleeper train in 1886, which is described well in the book: A Family Flight Through Mexico. Long distance journeys throughout the Americas necessitated the need for comfortable sleeping cars. This service ran from Mexico, up through to New York.

Railfans of the 19th century would have been keen on diagrams such as this one (above), much in the same way we are today. This again shows a locomotive from the Americas, but is a much more technical view of the inner working of, what would have been then, the latest technology. This book from 1876 aims to depict the ‘First Century of the Republic’ and the achievements that the United States had made in recent decades.

The full collection of British Library images can be viewed here (https://www.flickr.com/photos/britishlibrary). Flickr’s search tool allows specific searches within their account, with the terms ‘locomotive’, ‘train’ and ‘railway’ throwing up a variety of interesting railway images from around the world. For further information on the collection, contact the British Library via email or their various social media accounts.